Ashes, Ashes, They All Fall Dead 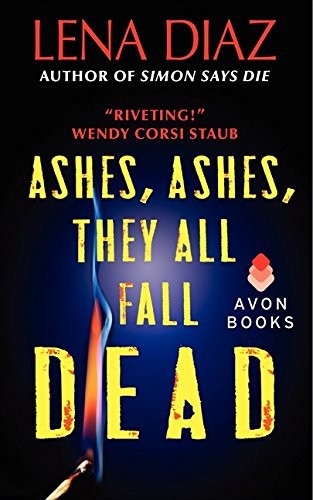 Ashes, Ashes,
They All
Fall Dead

From inception to publication, from contract, to art, to marketing, the HarperCollins team is fantastic. Thank you, every single one of you.

Thank you, Lucia Macro and Esi Sogah, for believing in this story from the beginning.

An especially appreciative and very warm thank you to Chelsey Emmelhainz for her incredible insight and amazing suggestions.

As always, thank you, Nalini Akolekar, my incredible agent.

A deep thank you to an amazing and talented author and all-around nice person—Wendy Corsi Staub—for reading my story and giving me such a great quote.

For brainstorming ideas, and being the very first reader of my very first words in Matt and Tessa’s story, thank you, Carey Baldwin.

Thank you, Denise Stanford, for your constant support and wicked sense of humor.

I dedicate this book to my hero of twenty-seven years, George. And also to our wonderful children, Sean and Jennifer. I love you all so much. You are, quite simply, everything.

An Excerpt from
Simon Says Die

An Excerpt from
Skies of Gold
by Zoë Archer

An Excerpt from
Crave
by Monica Murphy

H
OT, GREEDY TONGUES
of flame licked around the eaves, teasing, tasting, like a new lover hungry for a first caress, ravenous to join with the tantalizing flesh of the woman lying inside the house.

The beckoning inferno drew him across the dew-laden grass until the heat was so intense he was forced to step back. He lifted his face to the sky as the first ashes fluttered down, brushing softly across his skin like a warm breath, a gentle kiss.

He captured the sooty flakes in his hands, the familiar, acrid scent making his nostrils flare. The comforting crackle of the fire subtly changed and he cocked his head to listen. No, the
fire
hadn’t changed. Those were sirens, the high-pitched whine mingling with the dull roar of the flames.

Ashes, Ashes, They All Fall Dead.

T
HE STACKS OF
letters cluttered the top of the conference room table, each one a bleak epitaph to a life stolen, a life lost, a life destroyed. FBI Special Agent Tessa James slid one of the pages toward her, gingerly running her latex-gloved finger across the words. A name—Sharon Johnson. So simple. So short. So inadequate. Beneath it, a killer’s irreverent gloat, “Ashes, Ashes, They All Fall Dead,” followed by an odd little curlicue, like someone would make when doodling, except that it was on every letter. It seemed obscene that his words, and his mark, sat on the same pages as his victims’ names.

Even in death he wouldn’t let them go.

The door opened, letting in a rush of air-conditioning that fluttered the pages across the brown laminate surface, like leaves scattering across a grave. Tessa slapped her hands down so the papers wouldn’t fall off the table, and looked up to see her boss, Supervisory Special Agent Casey Matthews.

At one time he’d been her biggest supporter and friend.

He flicked a steely-gray glance at the tabletop. His mouth flattened and he shut the door behind him with an ominous click.

The matter-of-fact tone of his voice didn’t fool her. His ramrod-straight back and the tightness of his jaw were warning signs of an impending blowup. She mentally picked her way through a minefield of possible responses to his question. A cleverly constructed lie might save her. But she respected him too much to give him anything less than the truth.

“No new leads. I still haven’t linked the names to any reported cases, besides the two we already knew about that weren’t connected.”

This time it was his turn to watch her, to weigh her words, to carefully select
his
response.

She met his gaze, unflinching. Defying him outright had never been her plan. Which was why she’d intended to have the forbidden letters back into evidence before he returned from his meeting across town. Either the meeting had ended early, or he’d been more suspicious than she’d realized and had come back specifically to see whether she was obeying his orders.

She wished it were as simple as just deciding to blindly follow his lead. But nothing about this situation was simple. There were real people behind each of the names on the letters, victims who deserved justice. Her colleagues had given up on the case long ago, but she couldn’t. If life was even halfway fair, she wouldn’t have to sneak around to fight for people she’d never even met. But life
wasn’t
fair, and the FBI wasn’t forgiving of agents who broke the rules.

“This has to be a hoax,” he finally said. “It’s been going on for, what, three years now? If someone had actually killed all these people and sent these letters to the FBI to taunt us about his crimes, we’d be able to match at least one of those names to an unsolved murder.”

It always came down to the same argument. He thought it was a hoax. She was just as convinced it wasn’t. She desperately wanted him to be right, because that would mean all those lives had
not
been lost. But, somehow, she
knew
this wasn’t a joke. She knew it just as certainly as she knew she had to exert five-point-five pounds of pressure on her Glock 17’s trigger to fire a shot. There was no doubt in her mind that whoever had sent the letters was deadly serious, a dangerous killer who had to be stopped.

She tore her gaze away from the forlorn collection of names. Agreeing with him would be the smarter path, the easier path.

But not the
right
path.

Regardless of what happened in the next few minutes, she wasn’t going to cower and beg for forgiveness.
She
wasn’t the one choosing budgets and resources over saving lives.

“It’s not a hoax,” she insisted. “It’s been going on too long for that. We haven’t alerted the media about the letters, so whoever sent them isn’t getting any attention, or even the satisfaction of knowing he’s made the FBI spend any time playing his game. There’s no payoff.”

Casey rested a hip against the table, half sitting. The rigidness of his posture eased, and he seemed to be truly considering her argument. “If the person sending these letters was typical, I’d agree with you. But it’s just as likely he, or she, is mentally ill and gains enjoyment just by mailing them. Regardless, you have to look at the other side. Do the math. There have been twenty-three letters, which implies twenty-three victims, in less than thirty-six months—which is basically a fresh kill every six or seven weeks. His signature, his mode of killing, would have had to pop up on someone’s radar by now. It’s just not plausible that no one would have made the connection between at least some of his kills.”

His logic was sound. If he was arguing about any other case, she’d agree with him. But this case, for some reason she couldn’t fathom, struck her as different. She
had
to convince him she was right or more people would die.

She grabbed the first letter the killer had sent and held it up like an exhibit in court. “Anna Davidson. She’s someone’s daughter, maybe someone’s mother or wife. Don’t you want to know what happened to her? What about her family? Do they even know she’s dead? Can you imagine the agonizing limbo they must be in, living each day wondering what happened and whether they’ll ever see their loved one again?”

“You’re assuming Anna Davidson is real. There’s no proof that she is.”

She let out a deep sigh of frustration and carefully matched the letter back to its envelope and replaced them on the stack.

“Can I prove she’s real, that she was murdered? No. Not
yet
. But all I need is one clue to tie one victim to one of these names. A single thread I can pull and unravel this monster’s game.”

Casey crossed to the window. He pushed aside the blinds, but Tessa knew he wasn’t admiring the view. There
wasn’t
one—unless he considered a narrow side street and concrete building interesting. The FBI field office was tucked a block back from Reynolds Square, as if to keep the modern building from blighting Savannah’s historic district and ruining the tourists’ pictures. No, he was thinking, trying to decide what to do about a defiant agent who’d disobeyed his direct orders one too many times.

He turned around and leaned back against the windowsill. “We have other cases.”

“We also have a cold-case unit,” he continued, “which gave up on this months ago. When you asked for permission to work this case, my answer was clear.
No
. I need you on other assignments. And yet you continue to sneak around, working on what you want to work on instead of what you’re supposed to work on.”

She stiffened. “None of my other assignments have suffered in any way. The time I’ve spent on this has been on my own time, either during lunch or after hours.”

He quite deliberately glanced at his watch, then looked at the clock on the far wall, which clearly showed it was mid-morning, not lunchtime.

Her face heated. “Okay, I admit that today—
for the first time
—I’m using regular work hours to examine the letters. But the only reason I decided to pull them out this morning is because I just wrapped up my last assignment and didn’t have a new one to work on yet.”

He rolled his eyes. “Right. Like you don’t know what other pending cases we have and couldn’t have started looking at one. We both know better. That’s not the reason you took those letters out of evidence today and brought them in here.”

Her frustration at his refusal to see reason warred with the need to try to placate him. She swallowed hard and carefully modulated her tone to sound respectful, even if her words were anything but. “I admit my decision was partially based on the fact that you were supposed to be in a meeting across town.”

He let out a short bark of laughter. “You’re not going to stop, are you? No matter how many times I order you to drop this, you’re going to keep pressing, keep sneaking around.” He held up a hand to halt her reply. “Don’t answer that. It’ll just piss me off.”

His long strides quickly carried him across the small room, but instead of sitting, he paced back and forth. When he stopped directly in front of her, he flattened his palms on the top of the table and leaned down.

“What I want, what I need, is an explanation. Why is this case so important that you’re risking an eight-year career? You and I both know you’ve worked twice as hard as most of the men in this office to prove yourself, to succeed in this old boys’ network. You’ve built a reputation as one of the best agents on my team, and yet you’re willing to throw all that away. Why? Why are you so . . . obsessed . . . with this case?”

The edge of steel flashing in his eyes, the harsh words about her throwing away her career, had her stomach sinking like a corpse weighted down with chains in the Savannah River. Had she pushed him too far? Was this the end of her career?

END of LINE: Humanities Last Stand - part 3 by John Short
The Cellar by Richardson, Curtis
Possessed - Part Three by Coco Cadence
Dead Silence by Derting, Kimberly
The Wannabes by Coons, Tammy
Unleashed! by J A Mawter
Figures in Silk by Vanora Bennett
A Company of Heroes Book Five: The Space Cadet by Ron Miller
The Uprising (The Mamluks Saga: Episode 2) by Lake, Edward
The Lie: Evolution by Ken Ham