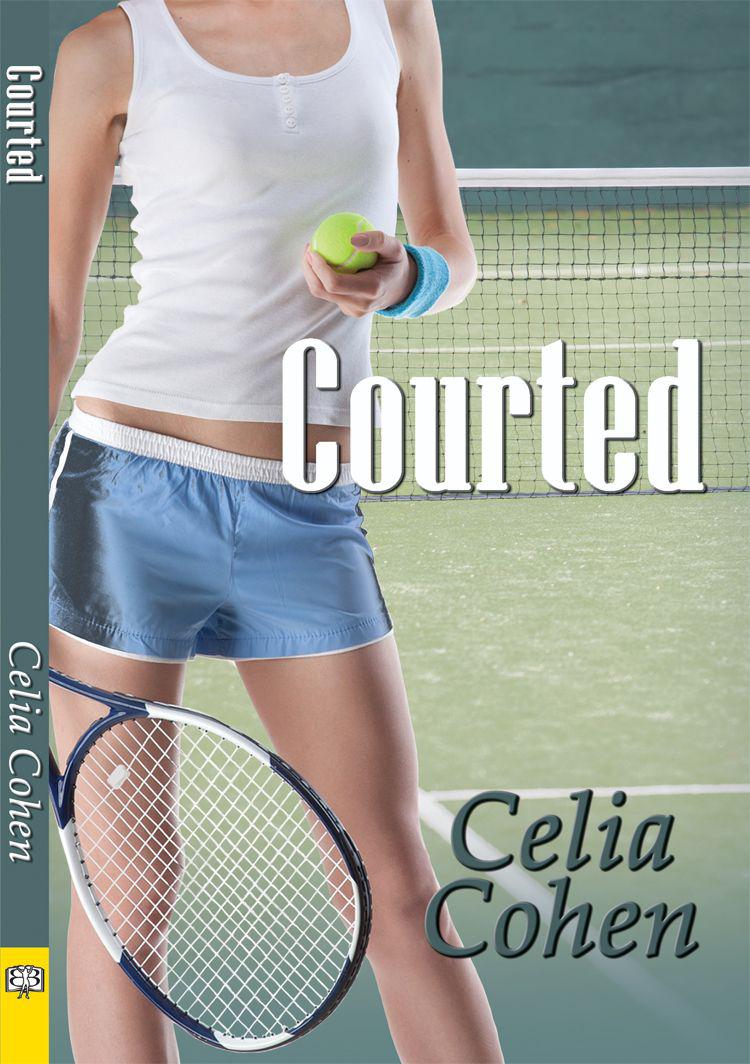 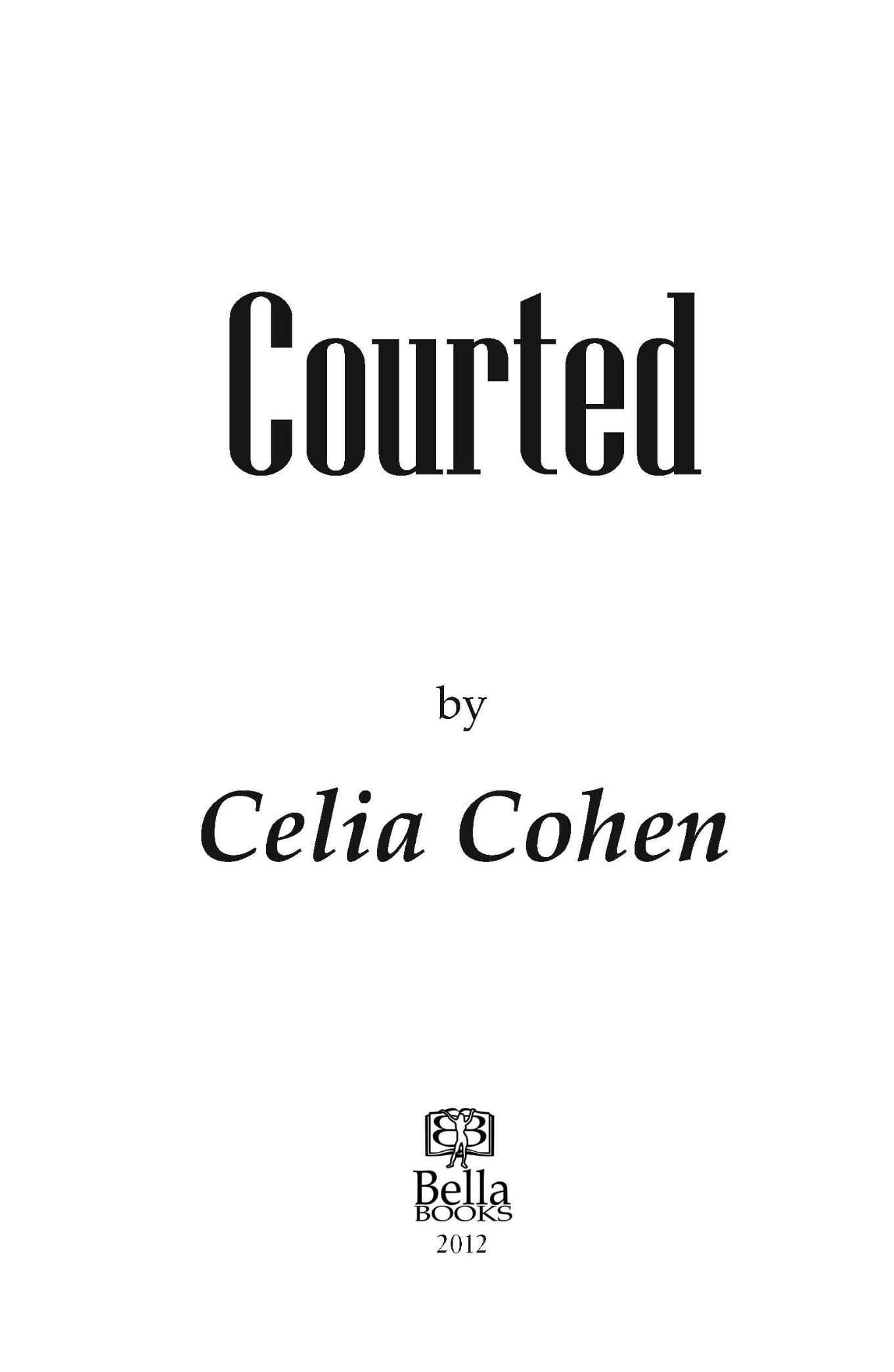 All rights reserved. No part of this book may be reproduced or transmitted in any form or by any means, electronic or mechanical, including photocopying, without permission in writing from the publisher.

Printed in the United States of America on acid-free paper

Other Bella Books by Celia Cohen

Celia Cohen is a newspaper writer who lives in Delaware. She is the author of
Smokey O
and
Payback.

At first the other cops were jealous when they found out I was the one assigned to the security detail for Alessandra de Ville. To the tennis world she was known simply as Alie, which was pronounced like
alley.
At twenty years old, she was the hottest prospect on the women’s tour.

Alie was the only child of a self-made tycoon who got obscenely rich by solving a national pet peeve. Papa de Ville did it by creating a glue that let people peel off those stubborn little white price stickers with ease and without leaving a trace. Before that he was scuffling through life, working as a counterman at a 24-hour-a-day diner. When his shift was over, he experimented obsessively with his glue until he got it right.

Papa de Ville’s creation was a sensation. The retailers fell into line one by one for his stickers and paid his price. Overnight he went from picking up tips on the counter to picking up tips on the stock market. He was the Guru of Glue, and he was worth millions. Best of all, his discovery was the sort that let him remain anonymous. No one knew who Oscar de Ville was, and he could do whatever he wanted.

What he wanted to do more than anything was lavish attention on his daughter. Papa de Ville was on his third wife, but he never wavered about Alie, who was well-suited to make the most of it. Like father, like daughter.

Alie had eyes as dark and melting as a puppy’s, lips like silk and the soul of a jewel thief. When she saw something she wanted, she took it. Nobody seemed to mind. It was an entitlement that came with being born blonde.

Alie was the marquee name for the first women’s professional tennis tournament ever to be staged in Hillsboro, the forgettable little city in central Pennsylvania where I worked on the police force. Papa de Ville grew up without distinction among Hillsboro’s residents, numbered at 23,507 and shrinking by the 1990 census. Although he left long ago, even before the dog days at the diner, he was putting up the money for the tournament. It wasn’t but of any sense of civic pride, but because he wanted to show everybody what a big shot he had become.

The tournament was an exhibition match, meaningless in the standings. It was one of those squirrelly little sidelights that didn’t mean much to the pros, and they wouldn’t have come at all if Papa de Ville hadn’t made the prize so rich. It wasn’t enough to attract the reigning legends like Steffi Graf or Monica Seles, but some of the teen sensations like Martina Hingis, the Australian Open champion, and Venus Williams were signed up, and so was Lindsay Davenport, the U.S. gold medal winner at the Olympic games in Atlanta. Most of them weren’t even bothering to bring their coaches along, although the full complement of overprotective tennis parents like Papa de Ville would be there. News coverage was expected to be sparse.

It was a big deal to Hillsboro, though. This was a place without much of anything, not since the mines gave out decades ago. It muddled along amid barren foothills, relying for life support on a small campus called Hillsboro College, a regional hospital and a surprisingly prosperous paper mill beside a rushing stream.

Papa wanted this exhibition tournament so much that he donated money to the college to build stands for its tennis courts so it could host the match.

My first assignment was to take Alie to the College Inn to get settled before a banquet there in the evening.

The inn was probably the classiest establishment within the Hillsboro city limits. It was located on the outskirts of the college campus. Part of it was a century old, quaint with antique furnishings, gaping fireplaces and a tea room so formal you still expected to see women wearing delicate white gloves. The inn hosted a lawn croquet tournament every year and had the only public grass tennis court in the state.

About five years ago Hillsboro College decided to market itself for business conferences, so it built a convention center and the College Inn added a modern wing. The new rooms had computer ports, telephones and televisions in the bathrooms, refrigerators and microwaves. It had a state-of-the-art fitness club and a newsstand that pledged it could get you any major newspaper in the country—just let them know when you made your reservations.

Alie had requested a room in the new wing. Papa de Ville had called later to make sure the Presidential Suite was reserved for her. He wouldn’t be staying there himself. He had contacted the local hospital and arranged to rent a condo at the Buena Vista Country Club normally made available to visiting doctors. Papa de Ville intended to do some heavy-duty entertaining in Hillsboro to make up for his scruffy childhood.

This tennis tournament was like an extra Christmas. The mayor was determined nothing would go wrong, and he ordered the police chief to use every cop for security. The campus police force was going to pitch in too.

Cops usually hate these celebrity security assignments. We didn’t get many of them, just for the occasional performing artist appearing at the college or a politician coming through town to campaign. Bonnie Raitt had been through earlier in the year, and a couple years ago the college hosted a debate in the U.S. Senate race between Democrat Harris Wofford, the incumbent who lost, and Republican Rick Santorum. The security detail was always disruptive and occasionally demeaning. A rock band had pushed us to the limit last spring. We were treated like the hired help, carrying bags and holding elevators open and tracking down a Chinese restaurant willing to deliver moo shu shrimp at two in the morning.

Alie de Ville’s presence got our attention, though, and the whole force suddenly became very serious about security. After reaching the quarterfinals at Wimbledon, Alie had won back-to-back tournaments in Italy and Poland, and her picture was on the cover of
Sports Illustrated.
She was wearing the most daring little tennis skirt you ever did see, caught by the wind just so, in a modern treatment of that famous rendition of Marilyn Monroe. The issue was threatening to outsell the swimsuit edition.

Almost every cop was angling for Alie’s security detail. Fortunately for me, Captain Randie Wilkes was in charge of the assignments. We had a special bond, going back to the days when I was a moody, misdirected kid and she was a young patrolwoman who coaxed me into playing in the Police Softball League for girls. She put me on security for Alie, even though I was pretty junior. I was twenty-four with only three years on the force.

Sergeant Arnold Cranshaw, who had perpetual desk duty because of an impressive Jello-like gut we called “The Beer Belly Polka,” couldn’t contain himself when he heard. “A blonde like that, and she goes to you, Kotter? What a waste!” he said.

Waste, hell. Like most of the cops in this repressive little city, Sergeant Cranshaw was too out of it to know what Alie’s appetites were—or what mine were, for that matter.

I didn’t care one bit that Alie was making her living by looking like every man’s dreamboat. Alie and I were going to get along fine.

I helped myself to some gum from the pack on Cranshaw’s desk. Then I gave him one of those impudent grins cops are famous for. It’s not true you learn how to smirk at the academy; either you’re born with the knack or you’ll never make the force.

“Just listen to yourself, Sarge. Maybe Captain Vilkes wanted someone who could keep her mind on her job,” I said.

“Who wants a blonde like Alie de Ville on their mind? I want her on my lap!” Cranshaw leered.

“Lap, Sarge? When was the last time you had one?”

“Kotter, that sounds a hell of a lot like insubordination.”

“Why is it whenever I tell the truth, it’s insubordination?” I said and beat it out of there.

I slipped into Randie’s office to pay my respects. She looked up, and I was struck as always by the alertness in her eyes, the sharpness that said she was ready for anything—confronting a killer, comforting lost child or outsmarting a practical joker.

Randie was what cynical employers called a two-fer. She was the highest ranking African-American woman in the department, and it was only a matter off time before she was promoted even higher. She was thirty-six, and everyone on the force expected her to be chief before she turned forty.

Randie’s full name was Ruth Diane Wilkes. When her little sister mispronounced her first name as Roof, Randie took to calling herself by her initials, R.D. Her playmates quickly transformed it into Randie. It stuck for life.

Randie was a cop’s cop. Her walls were decorated with all manner of awards for police work and community service. She had been beaten up working undercover on a case against a serial killer who preyed on prostitutes. She had commanded a regional task force that flushed out a rogue cop who was robbing banks. She had coached a girls’ softball team to a state championship—as I could have told anyone without looking at the plaque. I played on it.

“Take that gum out of your mouth. You look like a street urchin.”

I did as I was told. It was never wise to buck Randie Wilkes.

“Thanks.” I was wearing civilian clothes for security duty—dark blue slacks and jacket. Even when I was out of uniform, I couldn’t seem to tear myself away from standard police colors. “The Beer Belly Polka thinks this security assignment is being wasted on me.”

“Only to the point that I already owe you my soul, so why do anything else for me?”

“Because it keeps you in line.”

It was true. It did. I was difficult to motivate. “You don’t have to remind me,” I said.

I gave her the insolent cop grin but otherwise conceded her point. “I’m heading out to the airport.”

“I thought I’d get the car washed on the way out,” I said.

Randie fixed me with a half-mocking, half-patronizing look that never failed to make me feel twelve years old again. “It’s a police car. It’s not a Porsche,” she said. “Surely you don’t think you can impress an international tennis star with a clean police car, do you?”

Revenant by Phaedra Weldon
MURDER on the ROCKS (Allie Griffin Mysteries Book 2) by Leslie Leigh
Cain by José Saramago
Flesh in the Age of Reason by Roy Porter
Ghosts of Rosewood Asylum by Prosapio, Stephen
The King's Daughter by Suzanne Martel
Masked by Norah McClintock
Conspiracy Game by Christine Feehan
Brothers in Arms by Kendall McKenna
The Devil Made Me Do It by Colette R. Harrell