Banishment : Book 9 of the Heku Series 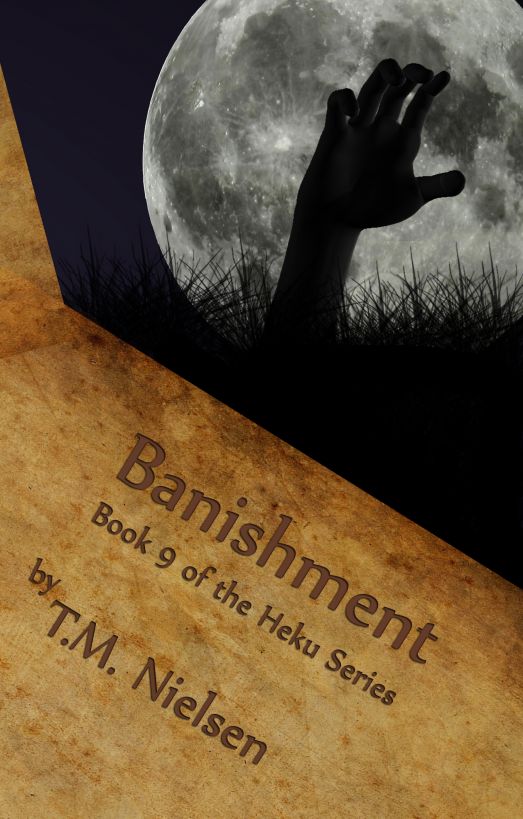 Book 9 of the Heku Series

Published by T.M. Nielsen at Smashwords

This book is available in print at
http://www.amazon.com

This eBook is licensed for your personal
enjoyment only. This eBook may not be re-sold or given away to
other people. If you would like to share this book with another
person, please purchase an additional copy for each recipient. If
you’re reading this book and did not purchase it, or it was not
purchased for your use only, then please return to Smashwords.com
and purchase your own copy. Thank you for respecting the hard work
of this author.

Many many thanks again go
out to my fans! It’s because of them that this
9
th
book
was published. I thank you all for reading and hope the typos don’t
deter from the story that I’ve told.

Emily and Chevalier will always be in my
heart, and I truly hope they will be in yours, too.

Emily ran through the dark streets. Her black
cloak was wet from dragging over the rain drenched pavement. There
was no fear, no worry, but she kept a steady pace to keep her
distance. The heku behind her was being careful not to expose
himself too early and risk getting caught. He blurred from shadow
to shadow, slowly gaining on her.

She could see her breath in the frigid night
air, and her fingers were numb from being in the cold. Her focus
was the tiny park outside of the human city where her Jeep was
parked.

As she rounded the corner and ran into the
park, she smiled, and then stopped and turned to wait for the heku
that was following her. He was faster now that they were out of the
city, and he soon appeared and slammed into her full-force,
knocking her down onto the wet grass. Before she had time to even
scream, he was pulled off of her and pinned to the ground by
Kyle.

“You ok?” Kyle asked her as his hand
tightened around the heku’s throat.

Emily nodded and stood up, “Yes… idiot. He
didn’t even stop to threaten me or anything. Just… bam… food.”

Kyle looked down at the heku, “What made you
think you were going to get away with this on Equites turf?”

All the heku could do was croak and pull at
Kyle’s fingers in a last-ditch effort to breathe.

Emily knelt down beside Kyle and looked at
the heku, “He’s not very big.”

Kyle instantly broke the heku’s neck and then
stood up and looked down with disgust, “No, he’s not big… but he’s
been on the loose killing mortals for almost five years.”

“Really?” she asked, standing also. “What
took you so long to catch him?”

Kyle looked at her and frowned, “He’s an
Encala. I was just told last week that he’d moved into my
territory.”

Emily smiled, “Don’t get offended… it was an
honest question.”

“I catch the heku I go after.”

Kyle shook his head and pulled out the Chief
Enforcer’s dagger.

“Wait, what about a trial?” Emily asked.

He smiled, “Do you object?”

Kyle was just toying with her. He knew how
badly Emily hated the whole idea of banishment and thought it
should be banned. Her thoughts on banishment had grown stronger in
the three years since Sotomar’s punishment. She’d gone to the Valle
four times begging for his release but so far had made no
progress.

“I won’t watch it,” she said, and turned and
walked back to her Jeep. She got in and started up the heater, then
began to fiddle with her phone to keep from watching the heku
turned to ash. Only a few minutes later, Kyle climbed in and looked
over at her.

Emily pulled out onto the abandoned street
and started for Council City, “I scraped my elbow when he tackled
me. No surgery needed.”

“Damn, the Elder’s going to kill me.”

“He will! I realize he’s let you help me a
few times, but I don’t think he likes it,” Kyle explained.

Emily grinned broadly, “He hates it! I think
it’s funny.”

“Yeah well, don’t push him too far. I know
you two have a sort of… understanding…”

“Yes, he’s backed off of being so protective,
and you’ve stopped doing everything on your own. That doesn’t mean
he’s ok with an injury though.”

“I’ll talk to him about it. It’s really just
a scraped elbow.”

“Sure,” Kyle said, and then nodded when the
Gate Guards motioned for them to pass. The city was alive with heku
doing their nightly shopping and visiting friends. It was very much
unlike the dead streets Emily encountered when she went out for a
nice morning run in the sun.

Chevalier and Mark were waiting in the garage
when Emily pulled up. She smiled and cut the engine before stepping
out.

“Did you get him?” Mark asked Kyle.

“Yes, we did. It’s easy once they catch Em’s
scent,” he explained. “It kind of takes the fun out of it though,
no fight.”

Emily reached out her right hand and pulled
up the sleeves of her sweater, exposing a fresh abrasion, “I
scraped my elbow.”

He bent down slightly to get a better look,
“That’s it?”

He nodded and stood up, “I’ll walk you up to
bed, and then I have something I need to do.”

Emily nodded and called out for hot cocoa
before taking Chevalier’s hand and walking up to the fifth floor.
Once in the bedroom, she sat down on the bear-skin rug in front of
the fireplace and took the hot cocoa into her hands to warm
them.

Chevalier sat in the chair beside her and
smiled.

“He was right there. This is the first heku
that didn’t stop to threaten me or sniff me out… he just
attacked.”

Chevalier grimaced, “Glad we got him
then.”

“I hate that savoring crap, but it does give
me a head start on ashing.”

“It’s not in our nature to attack without
some kind of interaction. We like to prolong the experience and
enjoy the moment.”

He smiled, “You could take Alexis up on her
suggestion…”

“No! I’ve been fed off of enough in my
lifetime to know it’s not pleasant.”

“You’ve never let me do it right though.”

He chuckled and stood up, “Get some sleep.
The Cavalry wants to head out by 10am.”

Emily took a sip of her hot cocoa and nodded,
“I’ll be ready. Is Megs going?”

“He said he’s not going on vacation.”

Chevalier kissed her lightly on the top of
the head and then disappeared from the room. After warming up,
Emily got up from the fire and packed a bag for the week. She and
some of the Cavalry were going out on the yacht because both
Council City and the Island were doing turnings.

Once packed, she got into a nightgown and
slipped into bed, quickly falling asleep.

Emily climbed up onto the bridge of the yacht
and sat down next to Kralen, “So, how’s it going?”

He chuckled, “No, not even a storm in sight.
Are you bored already?”

“No, just came to visit. None of the heku
down there will visit.”

“Yeah, the Cavalry on this trip are all
native Powans,” Kralen explained. “They’re pretty staunch and
believe you’re high ranking enough that they can’t visit
socially.”

“What about the nervous looking heku that’s
not on the Cavalry? What’s up with him?”

“Niccolo? He’s vying to be on the Cavalry,
and Mark thought it would be a good experience to have him out here
with you.”

“So the Cavalry are all watching how he
interacts with me?” Emily asked.

“I don’t have reports yet.”

“Well he looks like I’m going to die at any
moment. He’s so nervous, that when I dropped my book, he dove for
it and caught it when it was only an inch from the ground.”

“We haven’t had any new openings for the
Cavalry, and rumor has it one’s coming. He jumped on the chance to
take this mission.”

“Rumors? Don’t you know one way or the
other?”

“Yes, and we have no plans… not sure who
started the rumor.”

Emily leaned forward and looked down over the
bow of the ship.

“I get the feeling you want something,”
Kralen said after a few minutes of silence.

“Is the Island tracking us this trip?”

Kralen shrugged, “Why would we want to do
that?”

“Because it’ll be fun. It’s a gorgeous
island, and we didn’t really get to explore it.”

“I don’t know if the Council would appreciate
that.”

“Why wouldn’t they? The only reason the last
trip was bad was because I was so burned, and Kyle was
possessed.”

“I guess it’d be ok. It’ll take a few hours
to get there,” Kralen told her.

Kralen watched her disappear down into the
living area as he started up the engines and turned for the island
they had once been stranded on. Five hours later, Kralen stopped
the yacht and looked over the island, seeing if he could catch
anything suspicious.

After putting on some sunglasses, he climbed
down to the lower deck and turned to Niccolo, “Drop the
anchor.”

“Yes, Sir!” he said a little too loudly, and
then moved quickly to the back of the boat.

Kralen shook his head and then looked over
when Emily appeared carrying a bag and picnic basket, “You
ready?”

“Sure am,” she said, and then stopped and
looked over at the island. “We can’t get any closer?”

“Nope, we can take the raft in though.”

She nodded and put her things into the raft
before being helped in by one of the Cavalry. They all waited for
Niccolo to return.

Niccolo began to climb into the raft, but
Kralen stopped him, “You’re not going. You’re going to watch the
boat and wait for our return.”

“Yes, Sir,” the heku said before stepping
back.

Kralen smiled at his obvious unease, and then
slowly lowered the raft into the boat. Once in the water, two heku
began rowing toward the beach.

He smiled, “That’s what boots are for.”

She just smiled and then sat back. When they
reached the beach, Emily got out and waited for them to haul the
raft safely out of the water.

“It really is gorgeous here,” she said,
looking in toward the trees.

“Yeah, unless you’re feverishly trying to
find a missing charge.”

“I’ll try to behave,” she said, and then
started inland.

Half of the Cavalry moved in front of her and
began tearing a wide path through the trees. It wasn’t long before
the dark shadows of the cave appeared. The make-shift beds were
still mostly intact except that the palm leaves were now bare
twigs, and the few guard shirts left behind here ragged and falling
apart.

Emily knelt down and took a drink from the
cool stream, and then dug through her bag and pulled out a blanket
to sit on.

“So now what?” one of the Cavalry asked.

Kralen shrugged and looked at Emily, “What
exactly did you want to do here?”

“Let’s have a picnic and then go for a
swim.”

Emily ate slowly as she watched the heku
patrol the area around the cave, looking for anything dangerous.
When she was done, she tied her hair up and then followed Kralen
out to the secluded pond. The heku turned while she stripped down
to just a bikini, and then watched as she began to wade into the
water.