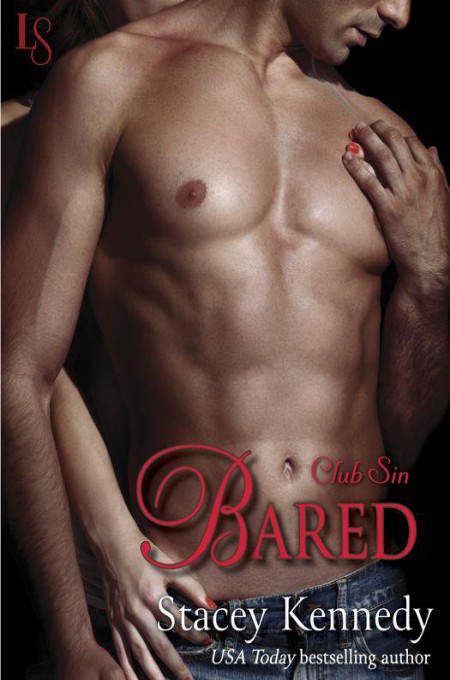 Bared
is a work of fiction. Names, places, and incidents either are products of the author’s imagination or are used fictitiously.

Published in the United States by Loveswept, an imprint and division of Random House LLC, a Penguin Random House Company, New York.

LOVESWEPT and colophon are trademarks of Random House, Inc.

For great friends who made me work harder and dig deeper

Master Aidan’s unspoken demands washed over Cora Adams. In an X position, she lay on her back atop the cool, metal Saint Andrew’s Cross, her head resting on an added plank of wood. Leather straps held her in place, snug against her wrists, ankles, waist, and chest, and her legs and arms were spread wide.

Her Dom preferred her to be blindfolded as they performed their scene.

The command of her Dom grounded her. He gave her a safe place to drift away from the pressures of life. Master Aidan could be rough when he wanted to, but he could also be caring, savoring the moment. Under his touch, she didn’t need vacations to clear her head, she needed only him.

Before he finished binding her to the table-like cross, the music had changed to a soothing song she’d heard once at a spa. The scent of Master Aidan’s woodsy aroma tickled through her nostrils. She licked her lips and drew her bottom lip between her teeth as warm air drifted across her puckered nipples.

His hand trailed along her thigh and moved to her hip in a delectable slow sweep, and she arched her body in acceptance of his touch. The press of the leather against her flesh burned into her core. Consumed by his dominance, engulfed in his powerful presence, she reacted to him like no other under his slow, sensual mastery.

“Quiet your mind, Cora.” His hand traveled over her hipbone. “Remain right here and in this moment.”

The low murmur fluttered her belly. His touch sent wicked heat storming into her loins. No choices. All pleasure. Complete submission. Her heart raced and she swallowed in anticipation of what was about to happen.

“There, Cora, much better.” A soft sigh escaped her as his fingertips caressed up her side and she shivered at his baritone. “Stay in my space.”

Rapid fire coursed through her veins, making her strain against the bindings. His low chuckle drifted across her and his knuckles brushed across her rib cage before his touch vanished.

She quietly waited for
him
.

The loud click cut through the silence and as warmth slid up her body, her lips curved. As the stream of wax landed above her belly button, she moaned. The next drop fell above the other, and she fought the yearning to squirm into his offering.

The heat spread quickly across her abdomen, and she cursed her bindings. Her body throbbed to move with each drop. She pulled against the straps, causing the leather to tighten and chafe her flesh. Her mouth moistened in excitement as the wax moved toward her taut nipple.

She groaned, aching for the heat right there—right where she needed it. Her nipples puckered tightly, so desperate for his mouth. As if he read her thoughts, his hand settled on the curve of her breast. She lifted her chin and her inner muscles clenched.

The pool of heat came faster and faster again … until there was no beginning and no end, only warmth spreading like a heated blanket over her. Her sex clenching in adulterated desire.

His warm breath caressed her ear. “Still with me?”

More wax landed in the center of her abdomen, and she exhaled a long, slow breath. Her sex spasmed, pulsating for him as more wax settled along her belly button. She clenched her teeth against the surge of need when another drop immediately followed.

The warmth from the flame vanished from her stomach before his breath tickled her swollen sex, unleashing a fierce gasp from her throat. She groaned, unashamed, as the flat of his tongue swept up her folds.

He didn’t lick her, he devoured her.

His tongue danced over her lower lips in seductive, languid sweeps. Her heartbeat quickened as he slowly guided her to orgasm with soft, sensual flicks. Each tickle of his tongue
stole the air from her lungs. Every kiss on her hot sex forced her to float in pleasure.

Consumed by this touch, she tumbled into his command. Her mind released her from the stress of the day. All of her worries vanished. When he settled his mouth over her clit and brought the nub between his teeth, her toes curled.

Desire flooded her and goose bumps trailed her flesh, while she fought the constraints of the bindings. His tongue danced across her until he nipped at her clit, then suddenly his mouth vanished. She whimpered in rejection of his departure.

Her mound throbbed, aching and moist. She lifted her head off the headrest, shivering against the leather pinning her to the hard metal beneath her damp flesh. The noise in the club sounded dull compared to her hammering heart.

Only Master Aidan could command her focus like this. She heard nothing or no one but the sound of his footsteps. She sensed only him. Every move he made, everything he did, left her acutely aware of him.

He brushed his hand over her thigh, dragging it up her body before he caught her chin. “Close your eyes.” With hot fingers and a gentle hold he removed the blindfold, damp from her exertion, from around her head.

Her eyes, now free of the cloth, wanted to naturally open, but she had no choice, she had to obey him, so she squeezed them tight. She sensed him move in closer as he wiped the sweat off her face. “Look at me.”

Blinking her eyes into focus, her gaze went right to him.

Under his commanding watchfulness her heart fluttered. Master Aidan’s face was chiseled with ruggedly handsome features and lips that always held a slight curve. She looked directly into his gray eyes and she was mesmerized. The man was more than her Dom, he was perfection. A hardworking, strong, and caring man, the world was a better place with Aidan in it.

She melted into him as his fingertips skimmed her jawline. He gave a small smile. “Very beautiful, luv.”

Her fingers twitched to run through the soft strands of his jet-black hair. She fought the desire to beg him to come closer, so she could explore those hard muscles under his dark T-shirt. But, knowing her place, all she responded with was “Thank you, sir.”

He held her gaze, steady and firm.

The side of his mouth curved. “All right, Cora. Shut your eyes.”

He stepped out of her vision, and her gaze landed on the large rectangular mirror attached to the ceiling. Even if the design he’d drawn with the wax wasn’t clear, he never did anything without purpose. Ultra-awake, rejuvenated by adrenaline, she followed his command and closed her eyes.

In every touch, in every moment under his command, she slid deeper into his control. She sensed his breath tickle her lower lips before his tongue caressed her slit. Lifting her chin, the bindings squeezed her flesh as she fought to move her body in rhythm with his slow licks. Her inner muscles clenched, an intense throb pooling heaviness into her sex.

As his tongue leisurely moved over her folds, she shivered and tightened her hands into fists. The cool metal feel of the cross underneath her eased her as he positioned his mouth over her sensitive flesh. When he sucked hard, her fingernails dug into her palms and her toes pointed. His tongue moved in wicked circles and the intense tickles rippled as she held back conflicting screams trying to escape from her throat.

A firm finger brushed across her slit and her body clamped down. Her legs and arms quivered beneath the leather binds. He pushed two fingers inside and pumped with speed and force. Another unspoken command washed over her.

When he purposefully but gently bit the hard nub, her breath hitched and her body froze in the highest peaks of ecstasy. With a scream only he could produce, she dropped into ecstasy. Her body vibrated and jerked beneath the bindings, the leather burning against her wrists and legs. Light danced before her closed eyes, and her head whipped from side to side as she tumbled into wave after wave of euphoric pleasure.

When she crashed into shuddering convulsions only three things remained:

The light, approving strokes of his fingers up her thigh.

Aidan Knight sensed the members of Club Sin watching their scene, but he remained attentive on Cora. She exuded femininity. She smelled of woman. She tasted of woman. She painted her nails, and she did fancy things with her hair.

If anyone wondered what a perfect submissive looked like, Cora was it. She obeyed his orders. She responded to his pleasure. She gave him total control and quieted her mind when he asked.

Promise of Tomorrow by Moore, S. Dionne
Omega Virus (Book 2): Revisited by Mendonca, D. Manuel
A Shortcut to Paradise by Teresa Solana
The Night at the Crossroads by Georges Simenon
House Arrest by Mary Morris
Blind Sight: A Novel by Terri Persons
Leaving Fishers by Margaret Peterson Haddix
The Lich by Adventure Time
Jolt! by Phil Cooke
One Foot In Front of the Other (Free Story Friday) by Hilden, Josh