Read Bastard out of Carolina Online

Bastard out of Carolina 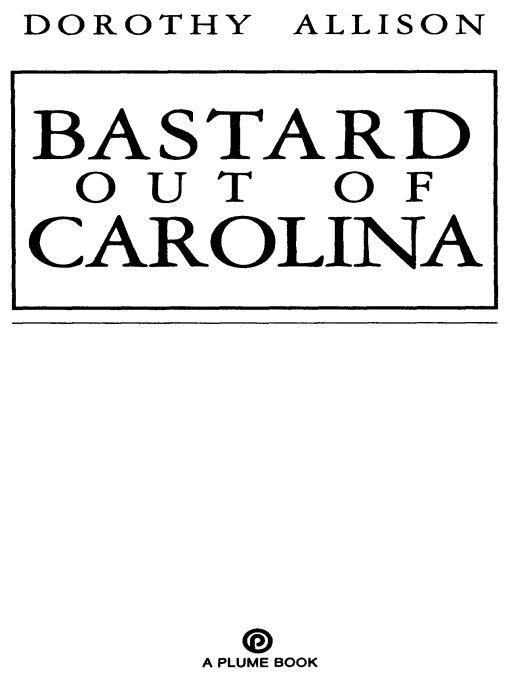 Table of Contents
Title Page
Copyright Page
Dedication
Chapter 1
Chapter 2
Chapter 3
Chapter 4
Chapter 5
Chapter 6
Chapter 7
Chapter 8
Chapter 9
Chapter 10
Chapter 11
Chapter 12
Chapter 13
Chapter 14
Chapter 15
Chapter 16
Chapter 17
Chapter 18
Chapter 19
Chapter 20
Chapter 21
Chapter 22
COMPLETE YOUR ESSENTIAL EDITIONS LIBRARY:
A PLUME BOOK ESSENTIAL EDITIONS BASTARD OUT OF CAROLINA
DOROTHY ALLISON is the author of
Trash,
a collection of short stories;
Cavedweller,
a novel; The
Women Who Hate Me, Poetry
1980-1990;
Skin: Talking About Sex, Class, and Literature;
and
Two or Three Things I Know for Sure.
She has won numerous awards for her work. Dorothy Allison lives in northern California.
Praise for
Bastard Out of Carolina
and Dorothy Allison
“Evocative, vivid, compelling ... a startling authentic landscape of Southern white-trash poverty, violence, madness and stubborn resiliency ... With
Bastard
Allison joins the ranks of such enduring Southern writers as Flannery O’Connor Walker Percy, Tennessee Williams, and Faulkner, creating a significant moral vision of the world.”
—
New York Quarterly
“Riveting ... Allison manages a rare feat: a child narrator who delivers her raw truth in remarkable, beautiful, original language ... One of those unusual books that show childhood abuse without sentimentality or simplicity.”
—
Boston Phoenix
“An exceptional first novel, this stunning, fluid, sad and courageous story would be outstanding even if it were the author’s tenth.”—
Booklist
“Allison’s work conjures comparison with Alice Walker.”
—
San Francisco Sentinel
“Formidable, compelling ... [Allison] brings to these pages a brilliant clarity and an astonishing grasp of the universality of childhood experience.”
—
Virginian-Pilot & Ledger-Star
“An irresistible cast of characters ... Allison renders their very look and touch with absolute precision and discernment.” —
San Francisco Review of Books
“If you are not afraid of reading about the truth, if you want to learn how it really is to grow up with family violence and incest, yet remain marvelously whole and human, buy this book.”—
Southern Voice
“Moving ... Allison cooks up an extended family of memorable characters ... and moves beyond benign images of Southern eccentrics.”—
Newsday
“Vivid, searing, rich ... Allison’s voice speaks with urgency and pungent images; she weaves a spell in a relentless, gripping story ... Bastard is a powerful work, a tale that moves along with the insidious force of a good mystery, seizing and not letting go.”—
Bay Area Reporter
“Unforgettable ... a brilliant, soul-wrenching novel that sings with the unbridled fervor of a gospel choir.”
—
Gay
&
Lesbian Times
“Affecting ... a writer of uncommon toughness and originality with a gift for seeing deeply into her characters and giving them an aching believability.”
—
The State
(South Carolina) 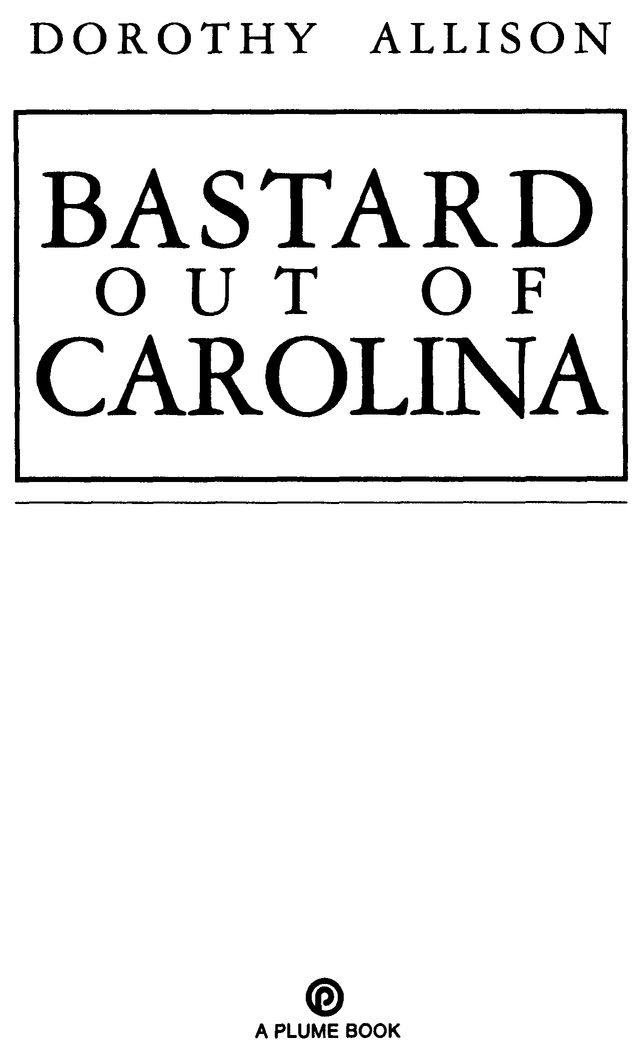 REGISTERED TRADEMARK-MARCA REGISTRADA
LIBRARY OF CONGRESS CATALOGING-IN-PUBLICATION DATA
Allison, Dorothy.
Bastard out of Carolina / Dorothy Allison. p. cm.
eISBN : 978-1-101-00717-4
I. Title.
PS3551.L453B37 1993
813’.54—dc20 92-32330 CIP
Without limiting the rights under copyright reserved above, no part of this publication may be reproduced, stored in or introduced into a retrieval system, or transmitted, in any form, or by any means (electronic, mechanical, photocopying, recording, or otherwise), without the prior written permission of both the copyright owner and the above publisher of this book.
PUBLISHER’S NOTE
This is a work of fiction. Names, characters, places, and incidents arc either the product of the author’s imagination or are used fictitiously, and any resemblance to actual persons, living or dead, business establishments, events, or locales is entirely coincidental.
The scanning, uploading, and distribution of this book via the Internet or via any other means without the permission of the publisher is illegal and punishable by law. Please purchase only authorized electronic editions, and do not participate in or encourage electronic piracy of copyrighted materials. Your support of the author’s rights is appreciated.
BOOKS ARE AVAILABLE AT QUANTITY DISCOUNTS WHEN USED TO PROMOTE PRODUCTS OR SERVICES. FOR INFORMATION PLEASE WRITE TO PREMIUM MARKETING DIVISION, PENGUIN GROUP (USA) INC., 375 HUDSON STREET, NEW YORK, NEW YORK 10014.

For Mama
Ruth Gibson Allison
1935-1990
People pay for what they do, and still more, for what they have allowed themselves to become. And they pay for it simply: by the lives they lead.
—JAMES BALDWIN
1
I
’ve been called Bone all my life, but my name’s Ruth Anne. I was named for and by my oldest aunt-Aunt Ruth. My mama didn’t have much to say about it, since strictly speaking, she wasn’t there. Mama and a carful of my aunts and uncles had been going out to the airport to meet one of the cousins who was on his way back from playing soldier. Aunt Alma, Aunt Ruth, and her husband, Travis, were squeezed into the front, and Mama was stretched out in back, sound asleep. Mama hadn’t adjusted to pregnant life very happily, and by the time she was eight months gone, she had a lot of trouble sleeping. She said that when she lay on her back it felt like I was crushing her, when she lay on her side it felt like I was climbing up her backbone, and there was no rest on her stomach at all. Her only comfort was the backseat of Uncle Travis’s Chevy, which was jacked up so high that it easily cradled little kids or pregnant women.
Moments after lying back into that seat, Mama had fallen into her first deep sleep in eight months. She slept so hard, even the accident didn’t wake her up.
My aunt Alma insists to this day that what happened was in no way Uncle Travis’s fault, but I
know
that the first time I ever saw Uncle Travis sober was when I was seventeen and they had just removed half his stomach along with his liver. I cannot imagine that he hadn’t been drinking. There’s no question in my mind but that they had
all
been drinking, except Mama, who never could drink, and certainly not when she was pregnant.
No, Mama was just asleep and everyone else was drunk. And what they did was plow headlong into a slow-moving car. The front of Uncle Travis’s Chevy accordioned; the back flew up; the aunts and Uncle Travis were squeezed so tight they just bounced a little; and Mama, still asleep with her hands curled under her chin, flew right over their heads, through the windshield, and over the car they hit. Going through the glass, she cut the top of her head, and when she hit the ground she bruised her backside, but other than that she wasn’t hurt at all. Of course, she didn’t wake up for three days, not till after Granny and Aunt Ruth had signed all the papers and picked out my name.
I am Ruth for my aunt Ruth, and Anne for my mama. I got the nickname Bone shortly after Mama brought me home from the hospital and Uncle Earle announced that I was “no bigger than a knucklebone” and Aunt Ruth’s youngest girl, Deedee, pulled the blanket back to see “the bone.” It’s lucky I’m not Mattie Raylene like Granny wanted. But Mama had always promised to name her first daughter after her oldest sister, and Aunt Ruth thought Mama’s child should just naturally carry Mama’s name since they had come so close to losing her.
Other than the name, they got just about everything else wrong. Neither Aunt Ruth nor Granny could write very clearly, and they hadn’t bothered to discuss how Anne would be spelled, so it wound up spelled three different ways on the form—Ann, Anne, and Anna. As for the name of the father, Granny refused to speak it after she had run him out of town for messing with her daughter, and Aunt Ruth had never been sure of his last name anyway. They tried to get away with just scribbling something down, but if the hospital didn’t mind how a baby’s middle name was spelled, they were definite about having a father’s last name. So Granny gave one and Ruth gave another, the clerk got mad, and there I was—certified a bastard by the state of South Carolina.
Mama always said it would never have happened if she’d been awake. “After all,” she told my aunt Alma, “they don’t ask for a marriage license before they put you up on the table.” She was convinced that she could have bluffed her way through it, said she was married firmly enough that no one would have questioned her.
ADS
15.4Mb size Format: txt, pdf, ePub