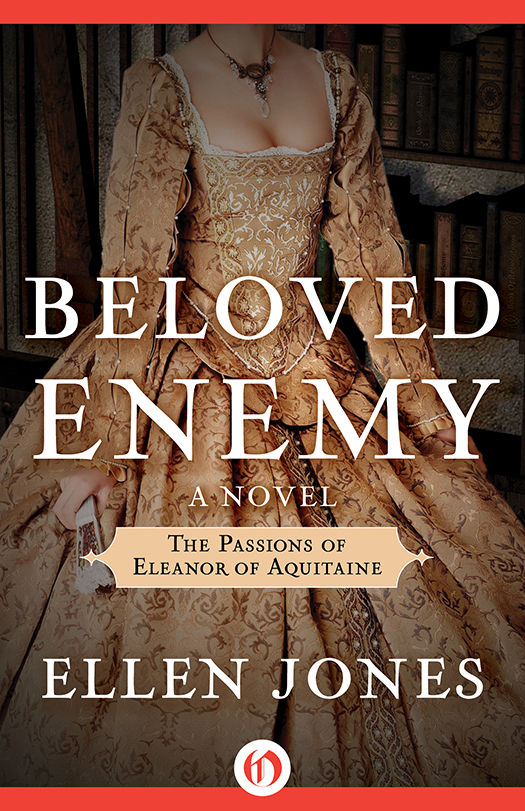 Beloved Enemy
The Passions of Eleanor of Aquitaine
Ellen Jones

Author’s Note on the Character of Bellebelle

THIS STORY IS A
work of fiction set against the backdrop of actual events of history. The characters, with few exceptions, are real and have their place in history. Many of the incidents depicted actually occurred; others, based on rumor and legend, may or may not have occurred. Chroniclers of the twelfth century do not always agree, nor do later historians who bring their own interpretations to past events. I have taken my own liberties with dates, locations, and the nature of various events.

AGNES,
an Abbess of Saintes, Eleanor’s aunt, her father’s sister.

MASTER ANDRE,
a cleric in Poitiers.

LOUIS
, the VII, his son, King of France.

HOUSE OF NORMANDY AND ANJOU

HENRY II
, Duke of Normandy and Count of Anjou, King of England.

GEOFFREY,
Count of Anjou, his father.

MAUD,
Countess of Anjou, his mother.

PEERS OF THE CHURCH AND CHURCHMEN

ABBESS OF FONTEVRAULT,
an abbey for monks and nuns.

BERNARD OF CLAIRVAUX,
Abbé of Citeaux.

THEOBALD OF BEC,
Archbishop of Canterbury.

THOMAS BECKET,
an archdeacon of Canterbury, Chancellor of England.

GYTHA,
her mother and a whore.

GILBERT,
a brothelmaster in Southwark.

HAWKE,
a brothelmaster in London.

IVO
, a woodman in the village.

ELFGIVA,
an alewife in the village.

To live with a woman without danger is more difficult than raising the dead to life.

Sermons on the Canticles

The most persistent hate is that which doth degenerate from love.

In full agreement and consent, ’Tis thus true lovers’ love must be. Two wills can only find content

Eleanor of Aquitaine Family as of 1161 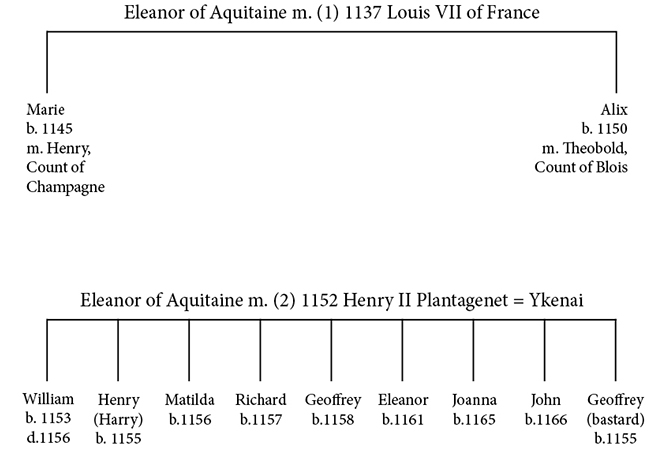 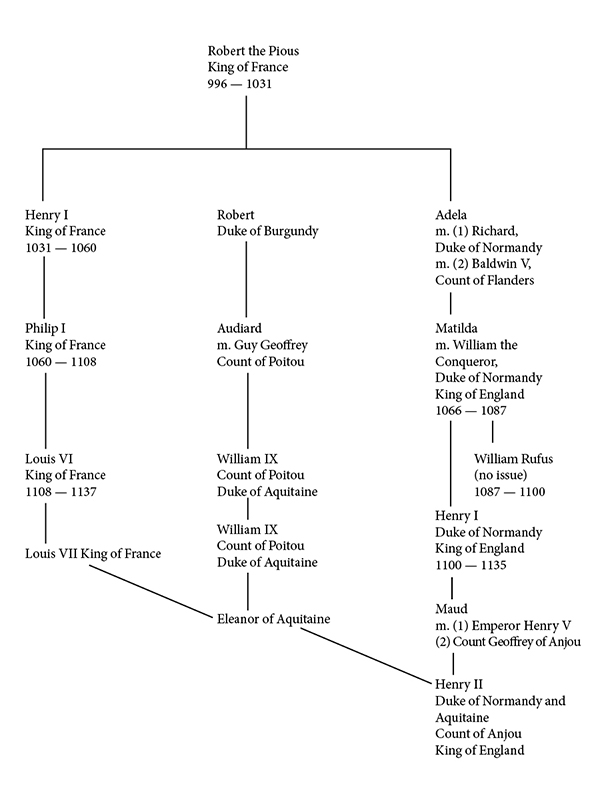 E
LEANOR STOOD BEFORE THE
abbess’s oak table hiding her fear behind the deceptively sweet smile and innocent expression she always assumed in the presence of Authority. The abbess had not yet arrived but the very chamber itself contained a forbidding air that seemed to emanate from the tapestried walls, the silver candelabra, the carved oak chest, even the flickering ivory tapers. It was a hot August afternoon but inside these quarters there was a chill.

Eleanor had no idea why she had been summoned from the schoolroom. Images of recently broken abbey rules flocked into her mind: climbing an apple tree in the orchard, snatching a loaf of bread from the kitchen after Compline, letting a flock of chickens out of their pen to run loose over the grounds, stealing out of the dorter after Matins—too many to count. She prided herself on seeing how many rules could be broken before the Abbess of Fontevrault found out.

The door opened behind her. With unsteady fingers, Eleanor smoothed down the skirt of her black convent gown, made sure the white cap was tied securely under her chin.

“Sit down, my child.” The abbess appeared on the opposite side of the table.

Framed in a stark white wimple, the stern face with its long aristocratic nose looked benign, almost kindly. So unusual was the abbess’s expression that instinctively Eleanor knew this summons could not concern her misdeeds. Apprehension fluttered like a cluster of moths in her belly. Once she was seated, her eyes encountered the grim scenes of martyred saints depicted on the crimson-and-blue wall hangings. She quickly looked away.

“My child, I fear I have bad news for you,” the abbess said in her calm voice. “This morning an equerry arrived from the ducal palace in Poitiers to inform us that death has claimed your mother and brother.” She crossed herself. “I deeply mourn your loss but urge you to remember that your mother and brother are with the Queen of Heaven now.
Requiesant in pace.
”

Her mother. Dead? And little William, barely two years old? It could not be true. Eleanor tried to picture her mother, whom she had not seen since she came to Fontevrault a year ago. All she could conjure up was a gentle, retiring shadow trying to make her behave in a proper manner. But for seven of her eight years, that shadow had remained steadfast as the morning sun, predictable as the evening star. Impossible to imagine life without her. It must be a mistake. Eleanor opened her mouth to say as much but the words stuck in her throat.

“You may be excused from your lessons for the remainder of the afternoon,” continued the abbess. “I know you will want to pray in the chapel, and Sister Cecile waits outside to accompany you.”

“But I must go home.” The words came in a strangled croak. “At once. It—it may not be true.”

“I think we may assume it is. Always best to recognize the truth sooner rather than later. Your father thought it best that you stay here for the nonce. Apparently matters are unsettled in Aquitaine at the moment and—”

“Everything is always unsettled in Aquitaine,” said Eleanor. “I cannot stay. My sister, Petronilla, will need me, and then—and then there is the funeral …” She could not go on.

“In such hot weather the funeral will not be delayed.”

“I want to see the equerry.”

“Of course. He is being looked after in the guest quarters.” The abbess rose to her feet. Tall and imposing in her black habit, she exuded such a commanding aura that resistance tended to shrivel in her presence. Now, she swooped around the table like a great winged bird, settled in front of Eleanor, and tilted her chin in talonlike fingers.

“Your studies should not be interrupted. You are proving to be an exceptional student since your rebellious attitude and frivolous behavior have lessened. After a very bad start I am pleased with your progress over the last year.”

Her eyes, gray as a pond in winter, held Eleanor in a steady gaze.

“Far better not to brood unduly over your loss. ‘Idleness is the enemy of the soul,’ sayeth St. Benedict. Study diverts attention. After all, you are a maid of eight years, no longer a babe to be coddled. What says Holy Writ? ‘The Lord giveth and the Lord taketh away. Blessed be the name of the Lord.’ ”

“But I want to go home,” Eleanor whispered, barely listening.

“There is no more to be said.” The abbess paused, as if debating with herself, then seemed to come to a decision. “Now, I want you to pay close attention to me. Eleanor!” The talons shook her chin with such impatience she winced.