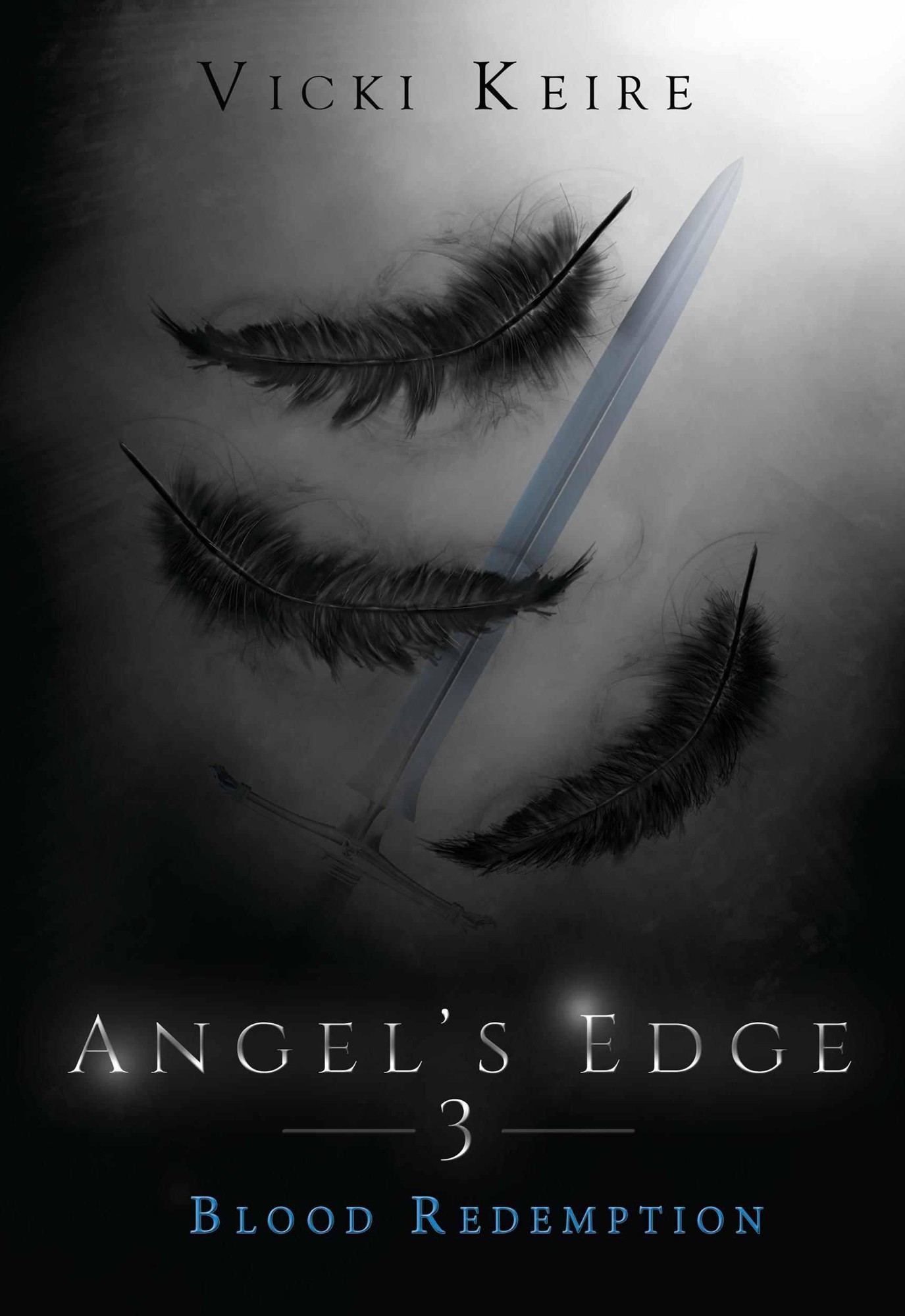 "The Best Angel-Demon Read: This book is by far the best angel-demon book about the fight between good and evil in a while. The prose is refreshing and the plot very realistic. The novel is a breath of fresh air with a new twist on a very classical plot line/story."
~Kindle Review for
Gifts of the Blood

to Grace and Max
who carry the fire

came here with a plan.

I thought I knew what I was doing.

I thought there would be at least one person I could trust.

Was it the drops of angel’s blood throbbing through my veins that made me such a dangerous combination of arrogant and stupid, or was that a trait I could claim solely as my own?

As I sat half-curled around my knees, I tried to breathe through the panic that threatened to pull me back into a dead faint. Sucking cracks of eye-stinging pain centered in the back of my skull and radiated outward. I kept my eyes fixed on the jagged flagstone floor. The heavy dark stones were so cold beneath me that my butt and thighs were going numb through the thin barrier of designer French jeans. I winced as I remembered how quickly I’d thrown them on in one of Asheroth’s identical white bedrooms. Had it really been only a few hours ago?

I trusted Ethan. I had trusted Jack. Both of them knew exactly who ruled the Twilight Kingdom.

Whatever you do, don’t scream.

There is some hope your innocence may protect you.

I felt sick, and it went much deeper than a head wound as bile rose to the back of my throat.

I kept my eyes down, my long hair the only barrier I had left. My hands twisted the denim just below my hips. Making fists helped the nausea a little, but didn’t do a thing for the anger battering against my temporary stupor.

When cold, rough fingers brushed my hair behind one ear, I froze. Except for the temperature, his touch felt so familiar, like Ethan’s before he changed. I almost wanted to lean into it. But a demon’s embrace was the last thing I needed when I was sick, hurting, and afraid. I launched myself backward before I could stop to think.

Jack was at my side in an instant, his arms around my shoulder, his whisper in my ear too intense to be comforting. “You hit your head.” He tugged on me like he wanted me up―and quickly―but I shrugged him off. His words became rapid fire bullets. “You should try to stand, Caspia. If there is any way at all you can get up on your own two feet, you had better do it now because it might be the only way he’ll let you walk out of here.”

I stared at Jack, a flesh and blood version of my dreams come to life.

“I can’t trust any of you,” I whispered. “You knew about this.” Bottle rockets of pain exploded across one small area at the center of my skull.

Jack swept his eyes around the room and touched the back of my head. “There’s no one else to trust here, Caspia,” Jack cautioned. My blood covered three of his fingers. He brought them up between us like he was making some kind of vow. “Remember that. If not me, fine. But don’t trust anyone else in this place either. That would be the worst mistake you could make.”

“Enough,” said the low cultured voice I remembered from before I passed out. “I don’t want Miss Chastain bleeding from a head wound on my floor.”

I found myself wrapped in arms so familiar, so momentarily welcome, that I almost forgot where I was.

In a place called The Twilight Kingdom. With Belial, a demon who’d been hunting me for an as-yet-to-be determined amount of time. A demon that looked almost exactly like my Ethan.

I wrenched myself backward, but Belial held me tightly by my forearm. “Let me go,” I growled. The sudden movement made me dizzy again and I stumbled.

He fixed his eyes on me, and I suppressed the urge to shriek. I knew they were dark where Ethan’s were bright; they were, in fact, the last memory I had before passing out. But now, pulled right against his face, I could see that his eyes were a single inky abyss pulling at me. Variegated shades of the darkest kinds of twilight swirled there, obscuring the irises, if he had any. Chills danced across my skin, freezing me colder than even the stone fingers which held me.

Belial was blind. Or sightless, I should say, because I had learned over the long years of working for Mr. Markov that lack of sight didn’t necessarily mean a person couldn’t see. My boss had fired more than one person for making that mistake. There had been the high school senior who harassed me and Amelie when he thought no one was looking. We’d suffered through exactly one weekend shift of unwelcome pinches and grabs before the boy suffered a nasty steam burn across both hands. Mr. Markov told him not to bother coming back. I had a feeling Belial wouldn’t be so gentle.

Dimly, Jack’s voice filtered through my haze, arguing. “I’ll take her,” he insisted. “Miranda’s rooms aren’t far from ours. She can have her healed in minutes.”

“But there is the problem of transport,” Belial mused, still just inches from my face. His hand had begun to chill through my cashmere sweater. “No, Jack. I understand your eagerness. But you are dismissed.”

“But―” Jack tried to argue some more. Whatever he had been going to say was cut off with a muffled punching sound followed by a soft grunt.

I dragged my eyes away from Belial’s face, which took more mental effort than I would have believed. Jack was on one knee, his head bent with both arms around his stomach. When he looked up, banked fury burned back at me. Eyes wide, I pulled even harder against Belial, trying to go to Jack, but he stopped me with the tiniest shake of his head.

“I’m fine,” I lied. I didn’t know where to look so I studied the flames in the fireplace. There was no wood in it. Bones lay heaped and burning in a pile at the center of the huge stone structure. I remembered how there had been no trees when Jack and I walked here. What else would they burn? Bonefire, my shocked mind tried to process, but couldn’t. I filed it away numbly. “I can walk on my own.” I forced my lips to form the words.

Bones. The warmth I felt came from bonefire. What kind of bones, I didn’t want to know. Ever.

My fellow Azalene nodded and swallowed hard. He jackknifed to attention, bowing slightly from the waist as if he hadn’t just been punched there. “Of course.” He wouldn’t even look at me. He spared one nod for Belial before spinning on his bare heel and practically sprinting back the way we’d come.

Leaving me alone with a demon who wore my boyfriend’s face.

That face smiled at me now. “Good. I’ve waited quite a long time for your arrival.”

I nodded hesitantly. The movement made me wince. How to ask what I really wanted to know without giving away too much? “I… When I left. There were―” I exhaled against the sheer insanity of the word. “Hellhounds. Attacking my town.”

His sightless eyes narrowed. “No questions.”

I could only stare at him. “What?” I asked, confused.

“No questions.” Belial released me and reached for the beautiful fox with the reddish gold fur, cradling it like it was something very valuable to him. The animal snuggled closer. “You’ll come with me, and do as you’re told, and ask no questions of any kind.”

Logan always told me my temper would get me in terrible trouble one day. I used to laugh and tell him I didn’t have a temper, that surely he had me confused with his other sister. But I felt the truth of his warning now. I forgot that I was in the Dark Realms, face to face with an ancient creature that literally held the power of life or death over me. I didn’t care what Belial might do to me. Instead, I advanced on him. “Like hell I won’t.” My hands formed into fists on their own. “I’ll ask any question I damn well please, and you’d better answer it.”

Belial looked more amused than anything else as a slight sneer curled across his face. When my fist connected with it, amusement changed to something else. Something sharp and eager. Pain ripped through my bones as my hand broke, and his murmured words washed over me, whispering.

A Season for Martyrs: A Novel by Bina Shah
Movement by Valerie Miner
The Sun Dog by Stephen King
How to Flirt with A Naked Werewolf by Molly Harper
Las horas oscuras by Juan Francisco Ferrándiz
Healing Love at Christmas by Crescent, Sam
Island's End by Padma Venkatraman
Priceless by Sherryl Woods
The Eleventh Tiger by David A. McIntee
Cousin Phillis by Elizabeth Gaskell