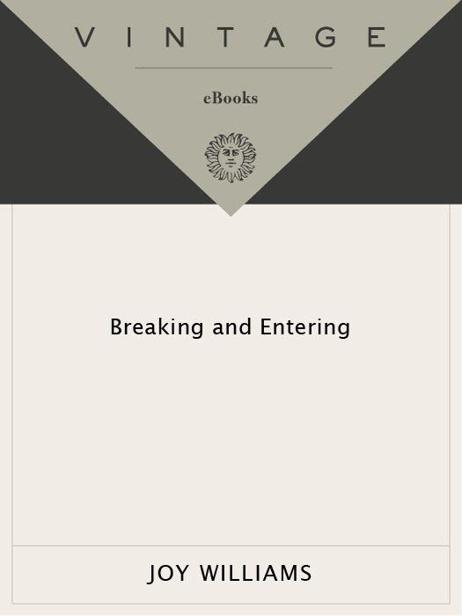 “Hypnotic … one of our most remarkable storytellers.”

“She catches, better than anyone writing today, the ominous vision at the corner of the eye and makes it inevitable.”

“For Joy Williams, the human personality is of most interest and most truth when it is under the most extreme pressure.… This notion of truth emerges in Joy Williams’s work in a complete Americanness of setting, language, and psychology that I find to be of great beauty and meaning.” 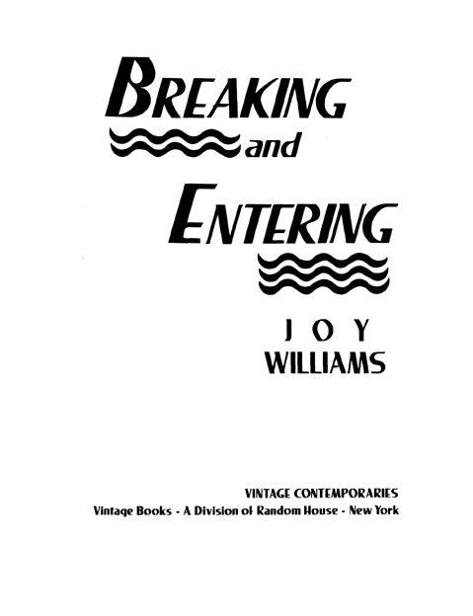 All rights reserved under International and Pan-American Copyright Conventions. Published in the United States by Random House, Inc., New York, and simultaneously in Canada by Random House of Canada Limited, Toronto.

Parts of this novel have appeared in slightly different form in
Esquire
and
The Paris Review
.

Grateful acknowledgment is made to the following for permission to reprint previously published material:
Macmillan Publishing Co.:
excerpt from the poem “The Shadowy Waters” from
Collected Poems of W. B. Yeats
. Canadian and open market rights administered by A. P. Watt, Ltd. on behalf of Michael B. Yeats and Macmillan London, Limited. Reprinted by permission of Macmillan Publishing Co. and A. P. Watt, Ltd.
Tree Publishing Co., Inc.:
excerpt from the lyrics to “Another Place, Another Time” by Jerry Chesnut. Copyright © 1968 by Tree Publishing Co., Inc. All rights reserved. Reprinted by permission.

For Elisabeth Williams and William Williams

For Caitlin and Rust

Then the strangest questions

are asked, which no human

being could answer: Why there

is only one such animal; why

I rather than anybody else

should own it, whether there

before and what would happen

if it died, whether it feels

lonely, why it has no children
,

what it is called, etc
.

W
illie and Liberty broke into a house on Crab Key and lived there for a week. The house had a tile near the door that said
CASA
VIRGINIA
. It was the home of Virginia and Chip Maxwell. It was two stories overlooking the Gulf, and had been built with the trickle-down from Phillips-head screw money. Willie achieved entry by ladder and a thin, flexible strip of aluminum. Crab Key was tiny and exclusive, belonging to an association that had an armed security patrol. The houses on Crab Key were owned by people so wealthy that they were hardly ever there.

Liberty and Willie saw the guard each morning. He was an old, lonely man, rather glossy and puffed up, his jaw puckered in and his chest puffed out like a child concentrating on making a muscle. He told Willie he had a cancer, but that grapefruit was curing it. He told Willie that they had wanted to cut again, but he had chosen grapefruit instead. He talked quite openly to Willie, as though they had been correspondents for years, just now meeting. Willie and Liberty must have reminded him of people he thought he knew, people who must have looked appropriate living in a million dollar
soaring cypress house on the beach. He thought they were guests of the owners.

Willie did have a look to him. People would babble on to Willie as though, in his implacability, they would find their grace. Willie walked through life a welcome guest. He had a closed, sleek face that did not transmit impressions. He was tight as a jar of jam. People were crazy about Willie.

The guard said, “The doctor says to me, ‘Say you want to see the Taj Mahal. You travel all the way to the Taj Mahal, but then you don’t go inside. You don’t pay the little extra to make the trip worthwhile.’ ”

“What was he talking about?” Willie asked.

“Me! The Taj Mahal was the inside of me! They go inside there to see what’s up, and while they’re inside they shine their light in all your corners. They take out whatever they want to besides. Haven’t you ever talked to a doctor? That’s the way they talk.” The guard sighed and looked around him. “If I were young, I wouldn’t be here,” he said. “The big show is definitely not out here.”

“The big show is in our heads,” Willie said.

Willie and the guard got along famously.

In the house, Clem was lying in the air-conditioning, before the sliding glass doors, his breath making small parachuting souls on the glass. Clem was Liberty’s dog, a big white Alsatian with pale eyes. His eyes were open, watching his vacation.

The guard said, “You know, I’ll tell you, my name is Turnupseed.”

“Pleased to know you,” Willie said.

“That name mean nothing to you?”

“I don’t believe it does,” Willie said.

Liberty said nothing. She supposed they were about to be arrested. She and Willie were young, but they had been breaking into other people’s houses for quite some time now. The town was a sprawling one on the Gulf Coast of Florida, and there were a number of Keys offshore. Everywhere there were houses. There was certainly no dearth of houses. They had their own that they were renting, but it didn’t seem to suit them. Anyplace they saw that appealed to them, and even some places that didn’t, they just went inside. They seemed to have a certain freedom in this regard, but Liberty thought they were bound to get caught someday.

“It seems like a long time ago, but I don’t see what difference that makes,” Turnupseed said. “We are talking about something immortal here. Young girls have made a cult of Dean even though he was a faggot.”

“Life is not a masterpiece,” Willie agreed.

“Life is a damn mess,” the guard said. He seemed genuinely outraged. He looked at Willie. “I’m somewhat of an expert on that incident. Ask me a question about it.”

“There was something definitely sinister about the Porsche,” Willie said.

“There sure was!” Turnupseed said. “A mechanic had both legs broken when the wreckage fell off the truck—a Beverly Hills doctor who acquired the engine was killed using it—another racing doctor using the drivetrain was seriously injured when his car turned over—the wreckage, with admonitory
notices declaring
THIS ACCIDENT COULD HAVE BEEN AVOIDED
, was toured by the Greater Los Angeles Safety Council, and it was at such a show in Sacramento that the car fell off its steel plinth and broke the hip of a teenage spectator …” Turnupseed was out of breath, wheezing heavily. “Coincidences are a hobby of mine,” he panted. “Another hobby I got is reading cookbooks.”

Turnupseed enjoyed reading cookbooks. In inclement weather, he could be seen sitting in his patrol car, poring over colored plates of food. He and Willie would speak with fervor about chili and cassoulet and pineapple-glazed yams and pastry sucrée.

The Sicilian's Passion by Sharon Kendrick
Waking Up Gray by R. E. Bradshaw
La mandrágora by Hanns Heinz Ewers
Clockwork Romance by Andy Mandela
Where Have All the Boys Gone? by Jenny Colgan
The Princess and the Huntsman by Green, Patricia
The Doves of Ohanavank by Zanoyan, Vahan
Suzanne's Sexy Shifters [Shy River Pack 2] (Siren Publishing Ménage Amour) by Bec Adams
Stealth Moves by Sanna Hines
Marianna by Nancy Buckingham