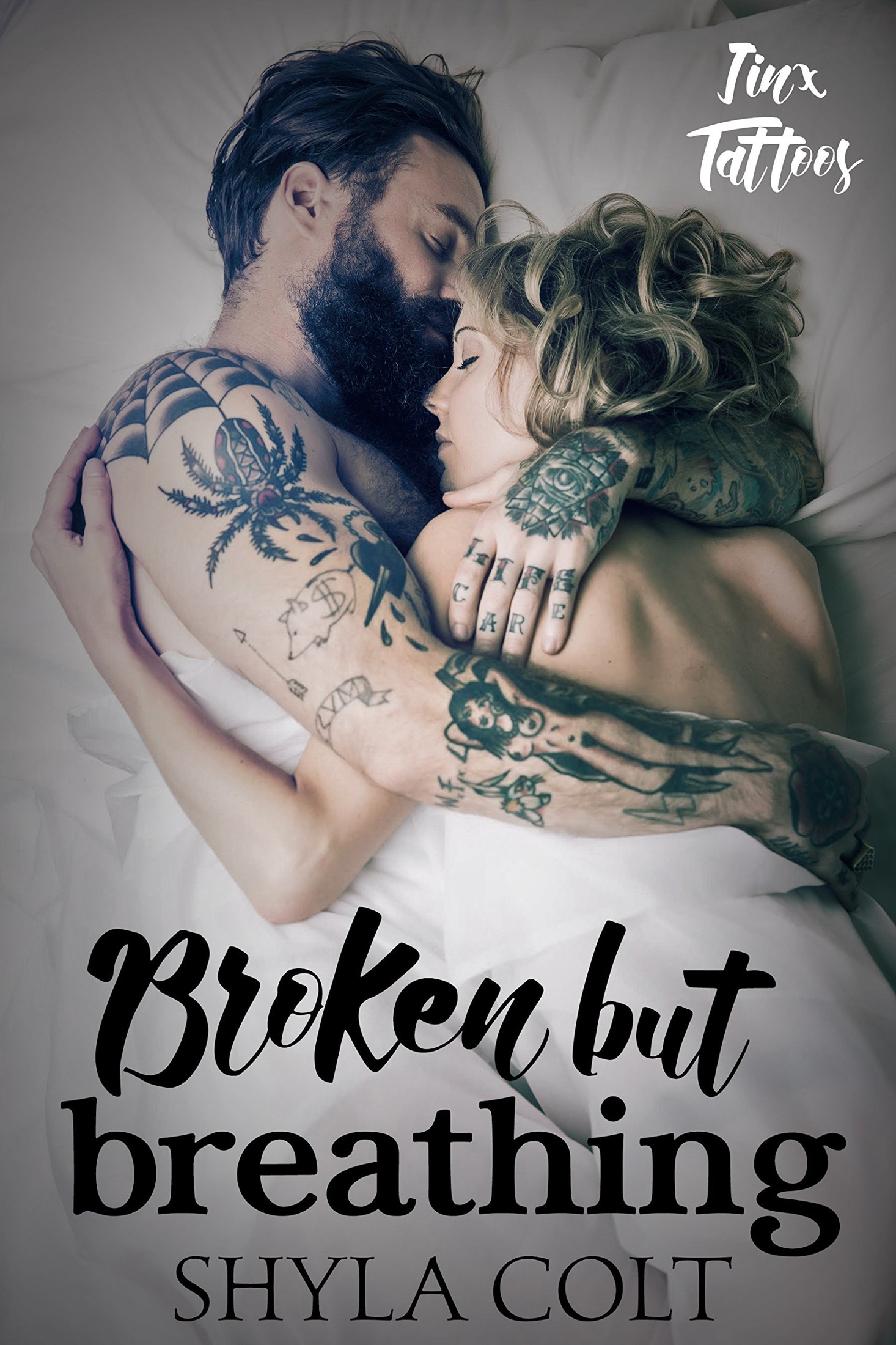 This Book is sold subject to the condition that it shall not, by way of trade or otherwise, be lent, re-sold, duplicated, hired out, or otherwise circulated without the publisher’s prior written consent in any form of binding or cover other than that in which it is published and without similar condition including this condition being imposed on the subsequent purchaser.

This is a work of fiction. Names, characters, businesses, places, events and incidents are

either the products of the author’s imagination or used in a fictitious manner. Any resemblance to actual persons, living or dead, or actual events is purely coincidental.

Cover and Formatting by
Dreams2Media

Editing by
There For You Editing

any means without written permission of the author.

F
or all the people in my life who believe in me, when I lost the ability to do it for myself. I love each of you more than I could ever express with mere words. A special thank you to my following Colt Betas: Crissy Sutcliffe, Sasha Ann, Tina, Michelle D., Jacqueline, Christie, Jennifer Love, and Erin St. Charles.

H
ate is a poison. It seeps into the water supplies and sickens everyone it comes into constant contact with. Racism comes in many forms, and touches many lives. I wanted to show that with this book. What you’ll read is going to be hard. It might turn your stomach, make you angry, and possibly have you asking why I wrote it. The reasons I listed are exactly why I penned it. We have a view of what we believe racism is in our minds, and it’s so much more than that. By remembering the past and being aware of the present, we can change the future.

Cold Play: In My Place

BackStreet Boys: The Meaning of Being Lonely

All American Rejects: Move Along

E
stelle Noll never minded storms. The sound of the rain dancing on the rooftop made her smile. The fresh scent and the coolness it always brought were a welcome break from the sweltering summer heat. She sat on the plush grey window seat, viewing the world through the pane of glass. They cracked the screen earlier in anticipation of what was to come. The distinct aroma that came from wet concrete was nature’s perfume. She couldn’t wait to breathe in the crisp, clean scent.

I’m an unrepentant pluviophile.
A total lover of rain who found joy and peace in the precipitation. The corners of her lips curled up as her mind went to her mother, Jane Abbot, and her father, James. They gifted her with her appreciation of books, rain, and whimsical things. The English-born couple loved classic literature, and wove wondrous tales about their life in Kent, England.

They’d returned to their hometown five years ago, and Estelle missed them more every day.
Soon they’ll be back to prepare for your birth, little one
. She rubbed her rounded belly.

A tiny foot kicked in response, and garnered a smile.
There’s a living, breathing being inside of me right now.
Wonderment filled her.
For five years she and Everett tried to have a baby. Therefore, with his low sperm count and her endometriosis this bun in her oven was a tiny miracle.

“I can’t wait to meet you, Emma,” she whispered. Content, she glanced at the worn copy of her name inspiration,
Great Expectations
, in her lap.

The wail of sirens brought her from Pip and Estelle’s childhood.
Tornado warning
. The warnings were common this time of year. Closing her book, she studied the sky rapidly changing color. The hairs on the back of her neck and arms stood on end; a sense of unease flooded her system. She closed the book and slid off the cushion, narrowing her eyes. Had the sky taken on a green hue? The wind had picked up. The branches on the trees shook violently in the wind.

“Stell.” Everett strode into the room. The terse tone and clipped words made her hackles rise.

“What’s wrong?” she asked, standing to greet him.

“We need to go downstairs. The bathroom is the safest place. They spotted a funnel nearby.”

Goosebumps covered her flesh. A fine sheen of sweat broke out on her forehead. She toyed with the hem of her maternity top, worrying the material as she rubbed it between her forefinger and thumb.

He moved to the window and struggled to close it. “I’ll close this. You go downstairs, now.”

The bass in his voice put her in motion. Fear slithered its way through her body; worry sat in her stomach like a stone, cold and unyielding. A lump formed in her throat. She gripped the bannister, careful not to trip as she waddled her way down the stairs. Balls of ice hit the windows, walls, and roof with loud cracks.

She jogged toward the bathroom. Fear drove her into the tiny room. She perched on the toilet seat, eager to have Everett in her line of sight. Taking deep breaths, she attempted to keep the panic forming at bay. Her stomach soured. She rocked back and forth to comfort herself and the squirming bundle in her belly. The attempt failed. His footsteps pounded on the steps.

He appeared in the doorway a few moments later. His face was pale as a sheet, and the crow’s feet in the corners of his eyes stood out. Lips drawn in a straight line, and dark eyes full of sadness, he presented a grim picture.
He doesn’t think we’re going to make it.
Tears blurred her vision, and her shoulders shook as she tried to hold in her sobs.

He sat on the edge of the tub and gripped her chin. “Hey. I need you to calm down for Emma, okay? I won’t let anything happen to you or the baby. We’re going to get into the tub, stay down, and pray our asses off. We’ll be interviewed on the news when all this is over. Okay?”

She swallowed the hysteria threatening to rise in her throat like carbonated bubbles full of crazy and nodded. Their lips met in a kiss that smacked of desperation. She poured every ounce of love she held for this man into their mouth mating. Surfacing for air, breathing heavily, they stared into each other’s eyes. She saw everything in his hazel orbs—the fear, the joy, and the determination. Everett Noll had never let her down when it counted. He wouldn’t start now if he could help it.

“I love you, too, Everett.” She had to yell to be heard over the roar that sounded like a massive waterfall.

“Let’s get in. It’s go time.” He stood, holding her hand as she slipped into the porcelain basin and rested on her side. She held her belly, wishing she could cradle the babe moving around inside of her in her arms.

The house vibrated, shaking them violently. Her body protested and her teeth rattled. Joints creaked and moaned. He covered her body with his own. The heat from his body, the cold, smooth surface of the tub, and the terror placed her in a crazed limbo. The noise grew loud.
It really does sound like a locomotive. Hail Mary, full of Grace, the Lord is with thee.
The rest of the prayer was lost to her screams as the roof ripped off, and all hell broke loose.

Beep. Beep. Beep. The noise pulled her from the blackness. She moaned, and awareness exploded inside of her mind like a bomb. She opened her mouth to cry out.
I can’t talk
. When she went to move her hand, and only her fingers twitched, panic set in. Her throat attempted to expel the foreign object, and she began to choke.

A gentle hand rested on her arm. She jerked her head to see who touched her.

A jolt of pain ran up her neck.

“Hey, hey, none of that. We had to place a tube in your mouth. Please calm down. You’ll put out the tube, and that would set your progress back.”

A blurry shape with blonde hair appeared at her bedside.

“Hi, I’m Nurse Amy, and I’ll be helping you. I’m sorry about the pain. They had to lower the dosage to bring you back around. You’ve been in a medically induced coma.”

Her brain was fuzzy.
Baby. What about my baby?
Suddenly her head was too heavy. Her neck failed her, and her head fell back down on the pillow. Her brain hurt, and she couldn’t focus. The thought she’d had slipped away.

“Don’t worry, you’ll drift in and out for a while,” the kind voice said.

The next time she came to her throat was blessedly clear.

“Mum?” she croaked. Her throat protested her attempt to talk, and she coughed.

“Don’t try to talk, baby. You’ve been in a medically induced coma for over two weeks, and they took the tube out two days ago. I’ll call the doctor.”

Turning her head, she struggled to focus on her mother.
Where is Ev?
She ran her shaky hands down her body and discovered the bump she loved was gone.
Emma?
Her retinas ached. She closed her eyes against the invasive brightness.
Something’s wrong
.

“Bae …” she coughed the word out, ignoring the gut-churning pain and intense nausea.

No. She can’t be gone. I can’t be here without my little girl.
Time froze. The world burned away around her, leaving her in hell on Earth. She thrashed as she shook from side to side. Tears burned her eyes and ran down her face onto her cracked lips.
I died in the tornado and this is purgatory. My punishment for all the sins I committed.
She pulled out the wires running from her to machines.
A heavy weight rested on her chest. She needed to get out of here.

“Stop, you’ll hurt yourself,” her mother cried, throwing herself over the bed. She pinned Estelle’s arms down.

“Ev— Ev—” she called desperately for her husband. He’d lost something precious, too.

She opened her mouth and let out a barking, broken, bleeding cry. Unable to stop, she continued until the nurse shot something into her IV and sleep stole her.