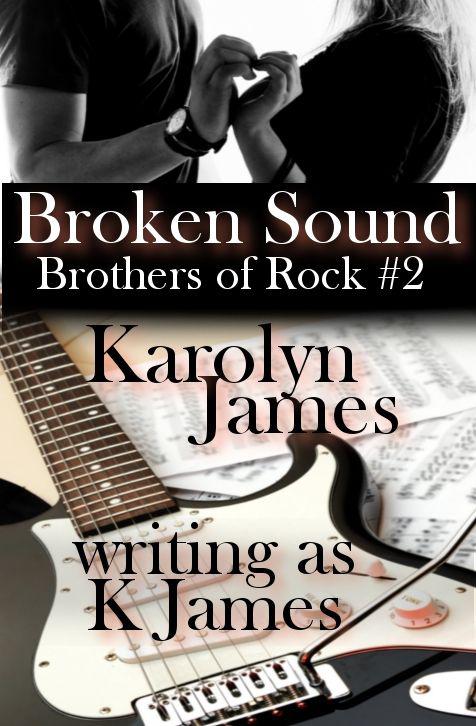 PRAISE FOR KAROLYN JAMES AND THE
BROTHERS OF ROCK
SERIES:

“...the camraderie between the members of the band really gives a sense of depth to the story...”

“Good and enjoyable read from beginning to end. Another top notch book from this author. Worth the read. Thumbs up.”

“It sweet and sexy has all you need to hear read this book you can't put the book down. Love it...”

“I bought this because I have heard good things about Karolyn James, but I was hesitant because I have been very disappointed in the other "popular" rockstar romances.”

“This did NOT disappoint! Karolyn James knows music! The story was wonderful and it was filled with actual musical knowledge, which tied the whole thing together for me.”

Rockstars expect women to show up at their hotel room, but when a woman shows up with an infant and tells Davey he is the father, his world is turned upside down.

Anna is a teacher and part-time waitress, desperate to make enough to pay off debts left to her by an ex-boyfriend who made her life a living hell. When her boss schedules her for an extra shift, he tells her it's her job to take care of a special guest... lead guitarist of Chasing Cross, Davey. The second Anna meets eyes with Davey, she feels something she's wanted for a long time. But with someone famous? That's impossible. Besides, Davey is there with a date.

When Davey returns to the restaurant, sans date, he asks to see Anna. She doesn't understand what he would want with her. He is a man with a big heart, kind eyes, and the true power that only a real rockstar could have. Then Anna learns the truth of Davey's life, from his haunted past to his rocky present. Still, she longs to be part of his future.  But when Anna's own past turns potentially deadly, life and love suddenly collide in a way that could hurt everyone and leave someone dead.

There were few choice words for the beautiful, black haired woman standing outside the hotel room.  Considering this woman had confessed that Davey, one of the guitarists for rock band, Chasing Cross, fathered her young child, he wasn’t sure how to process her.

At first, like any rational sense of thinking, Davey figured someone in the band was playing a joke on him.  When Johnnie called for him and forced him to wake up and tend to the situation, he was groggy and pissed off.  The night before had lasted two hours too late, but when running on the high of rock and roll and a perfect show, Davey felt as though he could be awake forever and live forever.  Immortality broke to pieces when he laughed at the woman and she didn’t back down.

She didn’t need to back down, she had the proof.

She pointed and Davey looked to see an infant sitting in a stroller.  His dark hair certainly came from his mother but when Davey locked eyes with the child, something churned inside him.  His mouth fell open and he put a hand over his open mouth as though it would cover up the shock and life changing potential of what sat in the stroller.  Slapping the black tray sitting before him.

“That’s your baby,” the woman said.

He wanted to break eye contact with the child but couldn’t.  Something was happening inside him, something he didn’t understand.  It scared the hell out of him.  He started to move forward, almost seeking comfort in the woman who, for all intensive purposes, was a stranger.  Technically, Davey and the woman weren’t strangers, something that hit Davey like a brick when the infant in the stroller let out a noise.

Davey stammered, knowing he treaded on very thin ice.  He looked over his shoulder, the hotel room door now shut.  What a metaphor.  Behind that door existed his life, his reality.  His band.  Chasing Cross.  They had just finished the last leg of their current tour and were now on a break.  And thanks to Rick for breaking his arm, that break was set to be extended even longer.  Davey had dreams of traveling, playing guitar, finding a beach, finding a woman, but certainly not this.

“Would you rather I go the papers?” the woman asked.  “The court?  Call a lawyer?  Have Mr. Big Bad Rockstar be on the front pages of all the papers and tabloids?”

Davey looked out of the corner of his eyes at the infant.  “You only got pregnant, had the baby, and just now decided to tell me...”

Davey then realized the way he was talking.  He closed his eyes, forcing himself to mentally step back into the hotel room, back into reality.

Looking at the infant pulled a few frayed strings on Davey’s heart.  Strings that he swore he wouldn’t go near anytime in the near future.  Not until he was in the right point of his life, with the right woman.  After the concerts finally ended.  When the buses were parked for good.  When another big time band took the place of Chasing Cross, touring the world, selling out shows, living the intense but rewarding lifestyle.

Davey felt his left hand ball into a fist.  The infant staring back at him had eyes that touched him.  It was like staring into a mirror... even though sometimes perception and reality were two very different things.

Davey pulled fellow Chasing Cross guitarist, Danny, out of the room for a second to explain he had to take care of some business, and then he bolted down the hall towards his room.  He reminded himself to just keep cool, to listen, and to assess all he could.  Worst case, he could just call Peter to step in.  He was the band manager, he would know how to handle something like this.  Peter knew people and had plenty of connections.  He could get a lawyer, he could get a restraining order, that was, if this woman turned out to be some crazy fan.  But that would rely on proof of Davey being the father of her baby.

The father of her baby.

That notion alone made Davey stop dead in his tracks, just a few feet from the hotel room door.

His heart ached and longed for what could actually be waiting in his hotel room.  The trick, and Davey knew it, was to separate his emotions from the truth.  To see everything with clear eyes, which ironically, this morning was the perfect morning considering the band didn’t indulge in their usual self destructive celebration they were used to after a big show.

Davey’s head may have been clear of booze and free from a hangover, but that didn’t mean his head was actually clear.

He opened the door to his room and found the woman holding the infant, bouncing the young child as she stood at the window.  From the back, Davey couldn’t help himself as he gazed up and down her body.  Having a baby didn’t do any harm to the woman’s body, at all.  Her curves were sultry, her jeans hugging her in all the right places.  When she looked over her shoulder at Davey, her black hair draping down her back, her dark, almost amber like eyes burning at him, Davey felt his heart race a little.  It made sense to him why he would have slept with her.

And she looked edgy.

A wicked combination, something Davey could have enjoyed.

The baby turned his head too and looked around the room, reminding Davey that maybe he had enjoyed himself just a little too much.

“Want to hold him?” the woman asked.

Davey put a hand out, a shaking hand, and said, “Can we just take a step back for minute?”

“A step back?  To where?  To your hotel room?  And not drink so much.  And not fool around without protection?  Is that what you want?”

“Whoa,” Davey said, “I never said that.  I just need to know more about all this.”

“All this?” the woman asked.  She looked at the baby and shook her head.  “He has a name.”

“After my father,” the woman said.  “He passed away when I was four months into the pregnancy.  I almost lost the baby, you know.”

“Yeah, I wouldn’t know,” Davey said, “because you never said anything.”

The woman scoffed.  She gently placed Donald back into his stroller and offered him a bottle, which he took.  She turned her attention to Davey, placing her hands on her hips.  Davey tried so hard to remember her... but the years brought so many miles, so many cities, so many shows, so many women.  It was the first time he felt ashamed of himself.  The woman stared at him, knowing damn sure who he was, but he couldn’t put the pieces together, yet.

“What was I supposed to do?” the woman asked.  “Just call you?  Track you down?  Show up with a fat belly and tell you I was pregnant?”

The woman sighed.  “Things just worked out.  A friend of mine works at the hotel.  She called and said you were here.  I know your band is taking a break from touring.  You guys are... well, a little bit older now.  And Donald, he’s getting big.  He’s walking, trying to talk, and it just hurts me each time I look at him.  He should have a father in his life.  I know I miss my father.”

Me too
, Davey thought as he choked back the response and the emotions that came with it.

“How old is Donald?” Davey asked.

“Wow.”  Davey looked at Donald.  The baby’s eyes were beautiful.  Innocent, full of life, ready to take over the world.  The purity and sense of freedom that Davey hadn’t seen or felt in a long time.

“I couldn’t do this any other way,” the woman said.  “It’s not like I could just find your number online and call you, right?”

Davey smiled.  “That’s true.  So I take it you live around here?”

“Down in Scotts,” the woman said.  “Only a thirty minute drive.”

Davey looked at the woman.  Her eyes were deadly and seductive.  Davey took a breath.  “And we must have... what, two years ago?”

She nodded to the baby and then smiled.

Davey almost recognized the smile.  Mixed with the darkness of the woman’s hair and eyes, he felt himself feeling for the woman.  He needed to block out those feelings, not wanting to get caught up in the emotional mess of lust and a baby.

Last Rites by William J. Craig
Magic University Book One: The Siren and the Sword by Cecilia Tan
The Case of the Fire Alarm by Dori Hillestad Butler, Jeremy Tugeau
The Gift of Shame by Sophie Hope-Walker
Billionaire Takes All by Jackson Kane
Rabbit Racer by Tamsyn Murray
Undersea by Geoffrey Morrison
Gone Girl by User
The Hardest (Working) Man in Showbiz by Ron Jeremy
BEFORE by Dawn Rae Miller