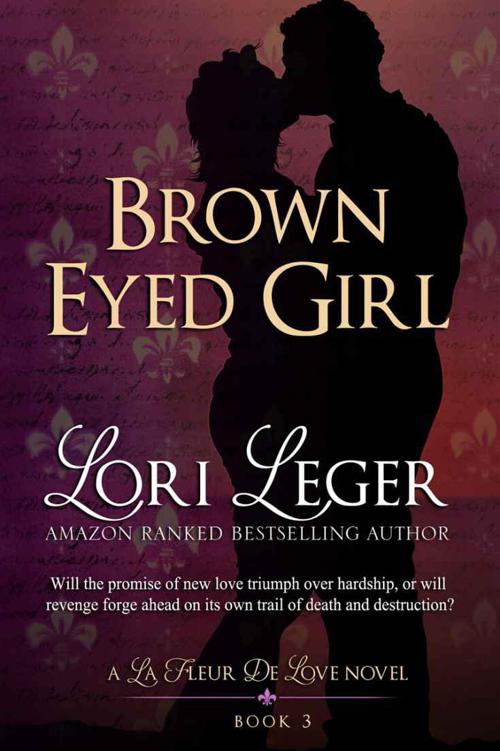 No part of this publication can be reproduced or transmitted in any form or by any means, electronic or mechanical, without permission in writing from Lori Leger.

To my baby sister, Carla—the caboose. This one’s for you.

Tiffany LeBlanc skirted the edge of the dance floor while scanning the group of wedding guests for her missing fiancé. “Where the hell are you, Tanner?” she mumbled, more disappointed than angry. After a month of taking on an injured colleague’s patient load in addition to her own, she was ready to relax and have some fun. She hadn’t intended on spending the entire reception watching everyone else dance while she warmed the chair seat. “Damn it all!” she said, a moment before she heard the masculine clearing of a throat from behind her. She swung around and stared up into the captivating blue eyes of Red McAllister, the groom’s best man.

“
Dr. LeBlanc, would you like to dance?” he said, his voice deep and alluring. She stared up at ‘Sir Hunkalot’, deciding the black designer tux elevated his buff good looks at least a notch or two.

She faltered a bit at first before reaching out to his extended fingertips. The soft touch of his large hand on the small of her back caused an immediate sense of awareness, sending chills up her spine. By the time they reached the dance floor she had to force herself to just
breathe
. He captured her in his strong embrace and led her masterfully to the soulful crooning of Percy Sledge singing
When
a Man Loves a Woman
. She took a deep breath, releasing it slowly.
Relax, Tiffany…he’s just a man…one who’s not your fiancé.

“
The doctor can dance.”

Somewhat startled by his words, Tiffany gave him what she hoped was a nonchalant nod. “The doctor can do lots of things when she has the opportunity. You’d think as few chances that we get to cut loose, my fiancé would be by my side,” she said, marveling at how easily they fell into step. Despite their sketchy first meeting back in August, she couldn’t deny the pull she’d felt in his presence since then. She’d thought about him often over the last few months…every instance had resulted in her feeling, in turn, guilty then determined to try even harder with Tanner. She sighed, thinking how miserably she’d failed in that department. For one thing, despite his constant urging, she was no closer to setting a wedding date today than she had been two years ago when he’d first given her the ring. Every time she asked herself what she was waiting for she drew a complete blank.

Red moved Tiffany smoothly around the dance floor, wanting her to remember how well they danced together. He’d thought about her often over the last few months, although he’d only had the opportunity to see her a few times since Jackson’s hospital release. Her image had invaded his thoughts no less than several times a day, not to mention the nights.

He passed his right index finger lightly over the huge diamond she wore on her left hand. Maybe if he made a good enough impression on her today, he could lure her away from Tanner before she married the asshole. As though the thought conjured up the man, he saw her missing fiancé walking toward the barn and stable area. Something about the way Tanner moved caught his attention—kept him from calling his presence out to Tiffany. The man moved stealthily, casting furtive glances around as if to make sure nobody followed him. Red searched the area around the stables in time to see his youngest sister, Annie, disappear into the structure. An animal lover since childhood, she’d told him earlier how badly she wanted to check out Bill’s livestock. He suspected the man following her had completely different motivation for going to the barn. By the time the song ended, Tanner had already reached the barn.

Itching to interfere, Red walked Tiffany off the dance floor and thanked her before making his way over to the stables.

He walked through the entrance in time to hear his younger sister’s angry objections.

“
What the hell do you think you’re doing, you jerk?”

Red homed in on her voice and turned into the last stall in time to see her throw every ounce of her tiny, plus or minus one hundred pounds into a slap to Tanner’s face. Before the man had a chance to recover she tripped him and shoved him down into a pile of hay.

“
Don’t you have a fiancé out there?” she snarled.

“
Yes he does, and she’s been looking for him,” Red commented, as both Annie and Tanner turned to look at him.

“
Hey, big brother, I can take care of myself,” Annie replied, her voice calm, unruffled.

Red nodded at his sister. “I can see that, but I have a vested interest in this. He’s the reason I wasn’t invited to Jackson’s first wedding.”

“
You’re
that
jerk?” Annie accused. “If I’d known that, I’d have done some real damage to that pampered face of yours.”

Tanner scrambled to his feet and backed up to the rear wall of the stall, He held his hands up, clearly concerned. “If you damage my hands, I’ll sue!”

Red shook his head slowly. “I won’t touch your hands.” He swung with his left fist and connected with Tanner’s jaw.

“
Crap, Scott!” Tanner gingerly felt his jaw as though feeling if it was broken. Satisfied that it wasn’t, he looked up. “Okay, I’d say that evens things up, wouldn’t you?”

Red smiled. “You wish, asshole. That was for Annie. I’ve waited fifteen long years for this one.” He hit him square in the nose with a powerful right.

Tanner swore as blood poured from his nose. “Son of a bitch! You broke it!”

Red looked down his nose at Tanner. “You deserve worse than that, but I don’t want to ruin the wedding. If you go out there and make a scene, I may reconsider.”

Tanner pressed a handkerchief to his nose, as Red took Annie’s arm gently and turned her toward the exit.

“
Oh, one more thing,” Annie said, pulling out of Red’s grasp. She stepped in front of Tanner, and with one lightening quick move, had him on his ass again—this time in a pile of fresh horse manure.

Red burst into laughter. “Damn girl, that was cold.”

“
Oh, I don’t know,” Annie said, looking down at the man who struggled to rise from the ‘muddy’ surface. “It looks kind of warm to me.”

Red smiled as he watched his sister’s approach. “Somebody’s kept up with her self-defense classes.”

“
Religiously,” Annie said, flashing her brother a grin as they headed out the stall and towards the door.

“
Could you at least get Tiffany?” Tanner asked, his voice muffled and nasally.

“
That’s the plan, asshole,” Red murmured, realizing too late he’d said it loud enough for Annie to catch it.

He shrugged, trying to make light of the situation. “I don’t think she deserves to be saddled with a fool like Tanner, that’s all.” He cringed at her next words.

“
Did you see any new foals in the stable?” he asked, hoping to draw her away from the subject.

“
Are you in love with Tiffany, Red?”

He stopped to glare down at the diminutive clone of his mother. “No, I’m not, and quit trying to make more of this than what it is. I want Tanner to suffer, that’s all.” He snorted, disgusted at his sister’s knowing grin, all too aware of what it would mean for him. He walked away from her then shook his head at the sound of her reciting an old jump rope song from when she was a kid.

“
You’re such an infant,” he called back to her as she began to laugh.

Red walked straight to his D.J. and requested two songs for immediate play, slipping the man a twenty. He approached Tiffany with his hand out. “Dance with me, Dr. LeBlanc?”

“
Only if you call me Red.” He led her to the dance floor, twirling her expertly around the perimeter, applying slightly more pressure on the small of her back than was necessary.

She’d have had to be dead not to realize how well they fit together, moved together on the dance floor. She would have had to be blind not to see how damn good he looked tonight. As a woman who ran every day to keep in shape, she could well appreciate the lengths he must go to keep up his athletic build. Red possessed a wealth of physical qualities—each one equally attractive in and of itself. When combined, oh so perfectly, on his muscular sex foot plus…ah hell…make that
six
foot plus frame, he was damn near irresistible.
Think about the dance, Tiffany…just the dance.
She tried, but their movements were so well matched, so perfectly synchronized, that she found herself wondering what else they’d do well together.

Get a grip. You’re engaged to Tanner. You know that guy who spouts excuses, lies, and alibis like Mount St. Helens spouts ash?
Normally, just the thought of her wandering fiancé was enough to give her overheated thoughts an ice water bath. She closed her eyes, resisting the urge to loop her arms around Red’s neck, and waited for the gradual return of sexual sanity.

For some reason, it didn’t happen.

Damn, but they moved well together
. Red pulled her closer, realizing it would take a supersized effort not to think about other things he’d like to do with her. They kept their silence for the rest of the dance, a good thing considering that when it came to this lady, sometimes the less he spoke, the better off he was. But God almighty, he’d never felt so comfortable with a dance partner before. Two words—
perfect fit
—kept flashing across his mind. As soon as the first song ended, he whisked Tiffany right into the second dance before she had a chance to protest.

He watched her head fall back in surrender, as John Michael Montgomery crooned
Hold on to Me
.

“
I adore this song,” she said, allowing her eyes to drift closed.

He stared down at her exposed throat, wishing he could bury his mouth on the smooth expanse of delicate skin. His breath hitched as she smiled, lifting her head slowly to open her eyes. “It’s an old favorite of mine, too,” he confessed.

“
It must be the partner.” He gazed down at her beautiful face and wondered how Tanner could turn to any other woman when he had her.

“
Why do you put up with him, Doc?” he asked, blaming the last beer for his loose tongue. Immediately, he felt the subtle shift in her body language, a slight stiffening of her spine at his invasive curiosity.

“
We have things in common—and five years together.”

The senseless answer set his teeth on edge. “Neither of which is good enough reason to marry him. Come on, you’ve got to know what a jerk he is.”

Just Breathe (Blue #1) by Chelle C. Craze
The Cloned Identity by David Hughes
The Baseball Economist: The Real Game Exposed by Bradbury, J.C.
The Way of the Black Beast by Stuart Jaffe
A Swiftly Tilting Planet by Madeleine L'Engle
Promising You (The Jade Series #4) by Everhart, Allie
The Mammoth Book of Threesomes and Moresomes by Linda Alvarez
An Ecology of MInd by Johnston, Stephen
Sinclair (Acquisition Series) by Celia Aaron
The Murder House by Simon Beaufort