Read By Sun and Candlelight Online

By Sun and Candlelight 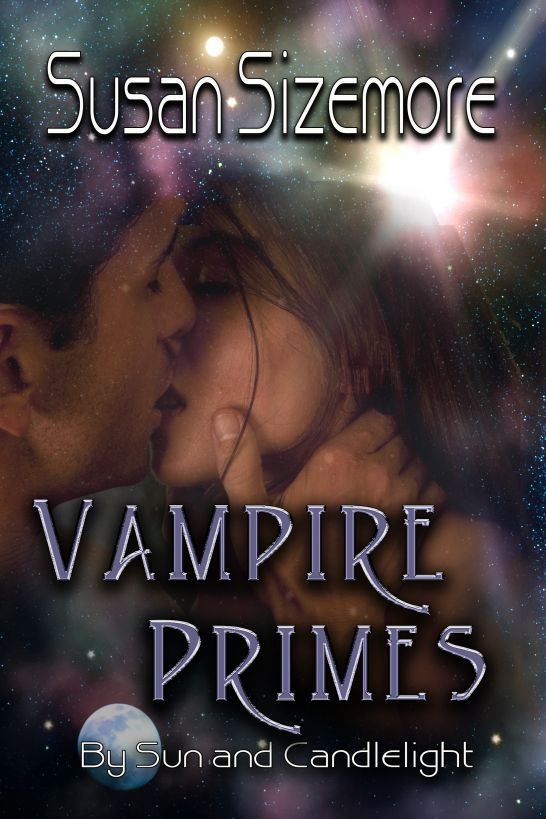 By Sun and Candlelight

The park around the palace was the
pride and prize of the capital city of New Byzant. Every
environment on Terra was represented here, flowing one into another
through the park's impossible to sense force fields. Be it desert
or frozen tundra, rain forest or mountain meadow, it was part of
the park. The park was a living memorial to the Terra which had
existed before a devastating energy pulse from deep space triggered
environmental disaster that nearly killed all life on the
planet.

There had been people living off
planet way back then, on Martian and Lunar settlements, on space
stations and asteroid colonies. This fortunate circumstance of
humanity being spread across the Sol star system at the time of the
disaster led directly to the founding of the Byzant Empire. Which
brought the vampire to the park on a night when the white walls and
golden domes of the Imperial Palace were illuminated by the full
moon.

He'd conducted business on the moon
a couple of days ago, and found that he did not like the place,
despite its famous view of the Homeworld of Humanity. The view made
it quite the tourist destination, and the place had been
overflowing with folk inbound for the upcoming Resurrection
Festival. Even in this time of war attending the festival held once
a decade on the ancient homeworld was the dream trip of a
lifetime.

The vampire had not been born on
Terra, but on a red star world more friendly to his kind. But his
ancestors were as native to Terra as any other type of human.
Rulers of the night while mortals ruled the day. Or at least that
was the way vampire legend had it. Mortals had grown too many,
vampires too few and equality had suffered, not in the vampires'
favor.

Before the disaster that crashed the
mother world almost to a cinder vampires developed drugs that let
them live in the yellow light of day. Many still took those drugs,
but he was not one of them. He was proud of his own red light
world, and he made his career in space. To be on Terra he'd had to
make preparations. Though it was now night, the time his kind had
evolved to dwell in, he wore a light filtering skin suit beneath
his Marine uniform, and had protective hooded mask, gloves and
goggles in a carry pouch at his belt. Ready for the day if this op
took longer than he expected.

People noticed him as he strolled
the section of the park near the palace entrance he'd chosen for
his incursion. He was a big male, tall, heavily muscled, wearing
the blue dress uniform of a two star major general, with many
decoration pinned upon his chest. His head was freshly shaved -
because Marines were an austere lot who would never sport a headful
of soft brown curls. He looked the part.

He could do nothing about telling
the mortals who noticed to forget seeing him. The palace's security
systems included sensitive apparatus for detecting the use of
telepathy. The guards he must pass were also insensitive to
telepathic suggestion as well as being equipped with psi dampening
filters - just in case.

The vampire knew he could not enter
the palace using only the talents he'd been born with. He was going
to use a security pass acquired from an expert forger. Acquiring
the pass had been his reason for spending time among all the
tourists on the moon.

With the night growing older, it was
time to make his move.

He smiled as he thought to himself
that it would be rude to intrude on the princess after she'd gone
to bed.

There were always people gathered
around the entrances to the palace. Most were tourists, some were
protesters for one cause or another. The heir to the throne was not
popular in some quarters at the moment. Tonight most of the
disgruntled were shouting and carrying signs calling for the
Porphyrgia's abdication, or worse. No one noticed that he was a
vampire, but a group of pacifists shouted at him because he was a
Marine. He didn't mind the negative attention. It made the guards
at the entrance more sympathetic when he presented himself at the
checkpoint.

He had no trouble getting past the
DNA, fingerprint, voice and eye scans. Everyone knew such physical
tests were reassuring for security records but could be bypassed.
His only concern was the forged pass. He handed it over when
requested, and waited, almost not breathing. Since vampires did
need oxygen, even if not quite as much as mortals, he managed to
keep his lungs working.

"Thank you, general," the senior
member of the guards finally said. She handed the pass back to him,
smiling.

"Would you like an escort, sir?" he
was asked.

The vampire shook his head. "I know
my way."

"Have a good evening, then." The
guards saluted.

He returned it and walked
confidently on his way.

He did know the way, the regular
route and several short cuts. He'd carefully studied the security
measures for all of them. Aware of these pitfalls, he chose another
route altogether.

It had been a while since he'd tried
his hand at wall climbing. He could move far faster than a mortal,
his claws came in handy, and shadows were his friends. His fangs
ached for the taste of royal blood. He made his way to a third
floor balcony. He had a forged shield key, but it proved
unnecessary. He would have sensed any shields before touching them,
but none were present. Did the princess think shielding would
interrupt the pleasant evening breeze flowing into her
suite?

From the balcony, the vampire
drifted with the breeze into the princess's bedroom. He could not
psychically or visually detect any guards around the perimeter of
the room. It seemed the princess preferred privacy to extra
security.

The room itself was the size of a
shuttle hangar, only nicely decorated in shades of blue. The bed
could have slept at least six, not that the princess was known for
getting up to that sort of thing.

The princess herself, Porphyrgia,
heir to the Byzant Empire, was seated at a desk, reading a headsup
screen. He moved to her, swift as lighting, silent as the grave.
His hands settled on her shoulders.

The princess sighed dramatically.
"Hon," she said to the intruder. "You have to stop sneaking in all
the time. You're going to have to meet my parents some
time."

General Matthias Raven - most people
called him Doc - lifted Princess Theodora - known to friends and
family as Zoe - to her feet and she turned into his embrace. After
a long, lingering kiss, he said, "I've heard that joke before,
sweetheart."

They kissed again, urgent hunger
flaming so quickly it almost overwhelming them. It had been nearly
a month since they'd seen each other. No matter how serious they
were about their duties to the Empire, they felt every moment of
their absences from each other. Being recently psychically bonded,
separation took a toll on them.

Doc was spared an awkward
conversation by the entrance of Commander Marcos, the head of Zoe's
security detail.

Doc put one arm around his
bondmate's waist and tossed the forged security pass to
Marcos.

The guard commander looked at the
pass closely. "My technicians are going to have fun taking this
apart, not to mention the man who made it."

Doc looked at Zoe. "What do you
think, ma'am?" He'd found that a bit of formality between them in
public went a long way to keep feathers being ruffled among the
courtiers, and Imperial officials.

"I think arresting the forger would
be a bad idea at the moment," she said. "Let's put a very close
watch on him and find out who uses his services."

"And watch his customers as well,
ma'am?" Marcos asked. She nodded. He smiled.

Zoe glanced toward the suite's main
entrance. Marcos bowed and took his leave.

Doc immediately picked up Zoe and
carried her to the bed. She was nibbling quite sexily on his
earlobe by the time they got there. She had sharp teeth for a
mortal. It was one of the things he adored about her.

He even liked her family.

It was her job he hated.

Matthias Raven was a loyal citizen
of the Byzant Empire. He considered it an honor as well as his duty
to serve in the Imperial Marines. The last thing he had ever
expected, humble servant of the Crown that he was, was to meet and
bond with the heir to the throne, the Porphrygia
herself.

Not that he'd known who she was when
they met. Not that she'd been aware that he was a vampire. They
been stuck together as prisoners in an underground POW camp and -
well, things happen in the dark.

And consequences come along with
every happily ever after.

She licked the skin of his throat.
"You are warm and delicious."

And she wasn't even talking about
his blood. Damn, how he loved this woman.

She had quick hands too, and they
made fast work unfastening his uniform when they settled onto the
bed. He breathed in her fresh, warm scent. His fangs grazed the
clean skin of her shoulder.

The prison where they met was a
humid, hot place where it was impossible not to be covered in
sweat, and bathing wasn't a daily occurrence. She liked his smell,
She'd told him so even when they were in the sweaty confines of POW
Camp Five. Zoe, princess of a star empire, was an earthy
woman.

His mouth covered hers. They rolled
to the center of the huge bed, and they clung to each other for a
moment. Then frantic lust took over. Her court dress and expensive
jewelry, the rest of his uniform and all his medals were stripped
off and tossed aside until they were skin to skin.

They made love until dawn, then
drifted to sleep safely in each other's arms.

Not that there was much time to
rest. Zoe was woken by the ping of her aural implant not long after
she went to sleep. It was a reminder of her day's schedule. She
sighed and cuddled closer to Doc, safe and warm in his muscular
embrace. She appreciated what she had, even if she couldn't stay
there very long.

"I love you," she whispered very
softly.

Doc pulled her even closer to him,
if such a thing was possible. "Me too," he whispered
back.

Enough, she didn't have time for the
intimacy she craved right now. Zoe pouted for a moment then she had
to get to work.

"I didn't mean to wake you," she
said. "There's an early meeting on my schedule."

"'S all right." He opened his
marvelous brown eyes and looked into hers.

Just as Zoe asked, "What about my
meeting your family?"

His memories rushed into her
head.

"Lady Amarantha, we're bonded." He
tried to keep the exasperation out of his voice, but knew he wasn't
hiding any of his emotions from the Matri, ladies and elders of the
Corvus Clan.

He had returned to his homeworld
specifically for this meeting. It wasn't going well. Mortal
prejudice wasn't the only thing at work against his and Zoe's
happiness.

"I will meet her," his sire and
bondmate to his mother spoke up. "You need not be involved in the
matter Matri. Or you, my dear," he added to Matthias's mother. "The
Clan need not formally acknowledge--"

"My bondmate is heir to the whole
damned Empire!" Matthias shouted. "What is the matter with all of
you? Is it because she's mortal? I know that we don't take as many
mortal bondmates as in the past but--"