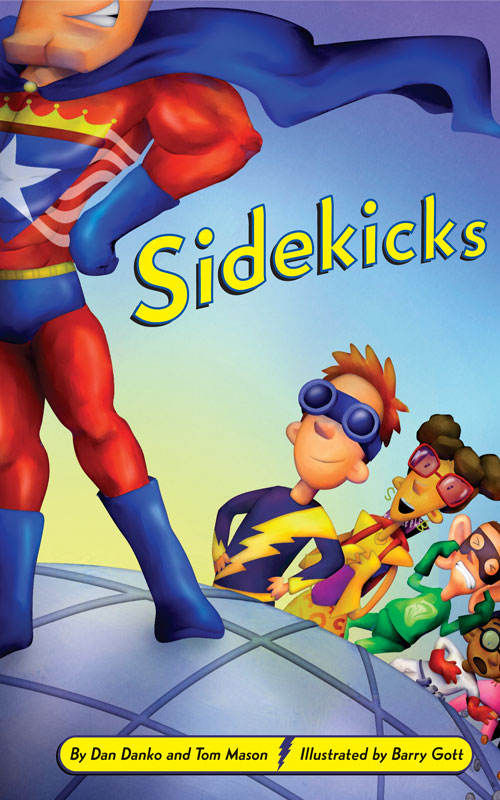 Chapter One: Evil Never Sleeps In

Chapter Six: Evil Leaves the Cap off the Toothpaste

Chapter Ten: Sucked into Space and Popped Like a Human Balloon

To Jack Kirby, the king who showed us how to dream with our eyes open

Listened to Charisma Kid’s stupid story about how he and King Justice saved the world. (Again.) Ironed Pumpkin Pete’s super shirt for his date with Lipstick Lydia. Did homework. Watched TV.

Spent whole day trying to get lipstick stains out of Pumpkinmobile upholstery. Did homework. Watched TV.

Grounded by Mom and Dad for being out past curfew last night while saving New York. Did homework. No TV.

“What are you tugging at?” Spelling Beatrice asked.

“Nothing!” I said, and stopped tugging.

I hate Spandex. I mean, I guess like a million years ago in the forties when all this superhero stuff really started, it was a cool idea. But man, that crud is always creeping up on you, y’know. Not that you really wanted to know that, but I just had to tell you in case, y’know, you ever see me tugging or something.

“Have you gotten any assignments today?” Spelling Beatrice asked, sitting next to me at the Sidekick Clubhouse Super Computer. Spelling Beatrice has the typical sidekick out fit. Bright yellow colors that scream “Kidnap me!” That same cruddy Spandex and double-thick glasses that make her look closer to Owl Girl (who looks nothing like an owl and only picked that name because she likes owls). Beatrice is seventeen. She’s been a sidekick for almost three years, but what she really wants to do is act.

My sidekick costume is pretty cool. I wear these totally hip goggles to keep the bugs out of my eyes when I run. My outfit is midnight blue with yellow highlights and this glittery lightning bolt striking across my chest.

There isn’t much science to being a superhero sidekick. You have to have a legal waiver from your parent or guardian unless you’re eighteen. Ever since that ugly court battle with UnderAge Albert and the child labor laws, it’s just plain impossible to become a sidekick without a bundle of legal paperwork. I’m thirteen now. So once a year, me and my parents have to go file more paperwork. You wanna talk about a life-or-death battle? Try standing in line at City Hall.

The only other thing you needed to be a sidekick is a super power. I run fast. Real fast. Before me, the fastest man alive was Fastest Man Alive Man. He could run 63.4 miles per hour. I don’t know what that is in kilometers. I’m American. We hate metrics.

Except with soda bottles. Those
only
come in metrics. One liter. Hey, don’t ask me. I just run fast.

“No assignments worth mentioning, unless you count finding new batteries for Pumpkin Pete’s utility gourd,” I complained, holding out eight triple-A’s.

“I thought that thing was nuclear-powered,” Spelling Beatrice commented.

“It was, until he dropped it at the Corn State Mall grand opening in Des Moines and had a core leak.” I turned the yellow gourd over and showed her a small crack covered by a Band-Aid.

The two of us sat and watched the Sidekick Clubhouse Super Computer monitor. Okay, maybe it wasn’t
really
very super and was barely even a computer. It’s a Vic-20. If you’re wondering what the heck that is, just go to your local computer museum. It’ll be the computer they’re using as a doorstop.

“No action tonight.” I sighed.

“Wanna play Scrabble?” Beatrice asked, pulling the game from her utility backpack. I could already hear those little letter tiles mocking me from inside the box.

“Might as well,” I said, nodding. “It beats monitor duty.”

And it did. It had only been three weeks since I became a superhero sidekick, but I already knew anything beat monitor duty. You just sit there staring at the monitor waiting for something to happen. They won’t call us on our cell phones or pagers. Every day one of us sidekicks has to sit in front of the Vic — I mean Sidekick Super Computer — and wait for a signal from the League of Big Justice. Then, and this is the best part, whoever is on monitor duty when the signal comes in calls all the other sidekicks on their cell phones and tells them to report.

Beatrice unfolded the game and we picked our seven letters.

“Z-I-G-G-U-R-A-T,” Beatrice spelled out as she placed down all of her letters in her first turn. “That’s nineteen points for the word, fifty for using all my letters at once, and double for going first... one hundred and thirty-eight points.”

“Wait! How can you spell an eight-letter word when you only have seven letters?” I asked, pointing to the seven tiles she had slapped down on the Scrabble board.

“I
am
Spelling Beatrice.”

I should have picked Monopoly.

“Do you want some help?” Beatrice inquired.

“No!” I reached down to my tile rack and pulled off a pretty good word. I mean, it’s no Zigguwhatever, but then I’m not a human dictionary, either. “Door. That’s four poin —”

Where’s an alien invasion when you really need one? I gotta admit, getting creamed in Scrabble by a girl whose biggest claim to fame was that she actually knows what a dangling participle is, is not really my idea of being a superhero. Or even a superhero sidekick.

I mean, you read all the unofficial biographies and watch all the unofficial movies-of-the week and it looks all glamorous and stuff. But the truth is, it’s more about doing laundry and getting my butt kicked by a girl who thinks proper grammar will save the earth.

Then it happened. It was amazing.

No, not a supervillain attack or some enormous monster rising from the ocean depths to destroy the city. There was no ticking bomb or urgent cry for help from the League of Big Justice. No. What happened was, I picked up the Scrabble board and threw it across the clubhouse.

Then
we got the urgent call for help from the League of Big Justice.

It was Captain Haggis! His pixilated image flashed briefly on the black and white screen of the Sidekick Super Computer. He sounded urgent, desperate, and then the transmission was cut.

Finally! Some action! And we were his only hope!

I gotta admit, when I get an assignment, it’s like my birthday, Christmas, and any other day people give me free stuff wrapped into one. I can’t even tell you how cool it is fighting evil.

Fighting bad is cool, too. But not as cool as fighting evil, I’ll tell you that.

Okay, so most of the time my assignments seemed to involve cleaning things. I don’t know what it is about superheroes, but they are the dirtiest people on the planet — and I’m not just talking about The Stain. At least that guy’s got an excuse. But I guess that’s just what happens when you’re the newest sidekick. Not like Charisma Kid. If I could be any sidekick, I would be him.

He’s been a sidekick longer than anyone but Sidekick Lad and is kinda the unofficial leader of the Sidekicks; not just because he’s the coolest sidekick in, like, the galaxy, but because he’s been assigned to the coolest superhero in the universe: King Justice, founder and captain of the League of Big Justice.

“Taking a bite out of crime, one pizza slice at a time.” At least that’s what King Justice’s public relations kit said.

I’ve only met Charisma Kid once. Well, I didn’t actually
meet
him. He kinda walked by me at the sidekicks roll call. He waved to me. Or I think he did. He could’ve been swatting that fly buzzing around his head, but I’m sure it was like a swatting-wave, you know? Two birds, one stone, and stuff. I’m kinda embarrassed to admit it, but before I became a sidekick, well, I kinda had Charisma Kid’s poster on my wall.

Okay, I wasn’t one of those geeks who lived in their parents’ basement. And I only had three posters. One of Charisma Kid and one of King Justice. The third was of Lipstick Lydia. It was on the inside of my closet door. You know how parents are about that kinda stuff.

Okay, I just gotta stop the excitement roller coaster right here for a sec. I mean, this is the League of Big Justice: the most awesome assemblage of superheroes the world has ever known, all under one super roof.

Every time I walk down the Hall of Heroes of Big Justice or past the League of Big Justice Souvenir Gift Shop, a chill runs down my spine. How could it not? Time and time again, these guys bail out the earth from alien invasions, mad scientists, robot armies, evil plots, and just plain nasty people. And now I’m one of them: or at least a sidekick to one of them.