Read Cameo and the Highwayman (Trilogy of Shadows Book 2) Online

Cameo and the Highwayman (Trilogy of Shadows Book 2) 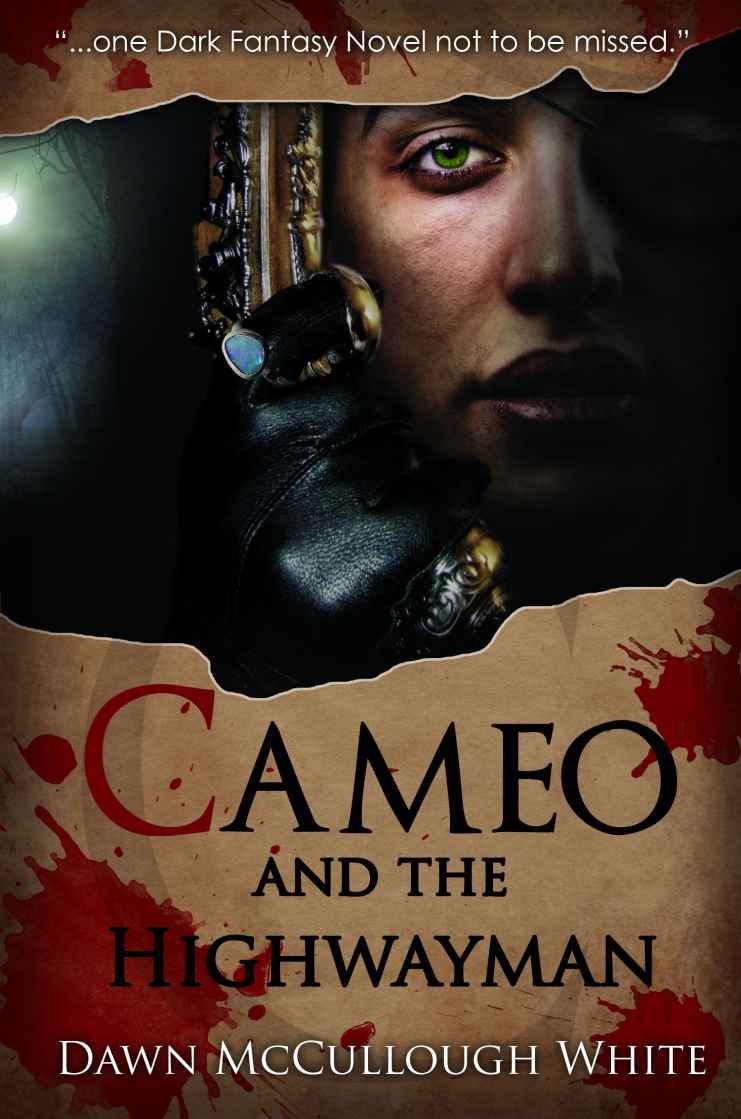 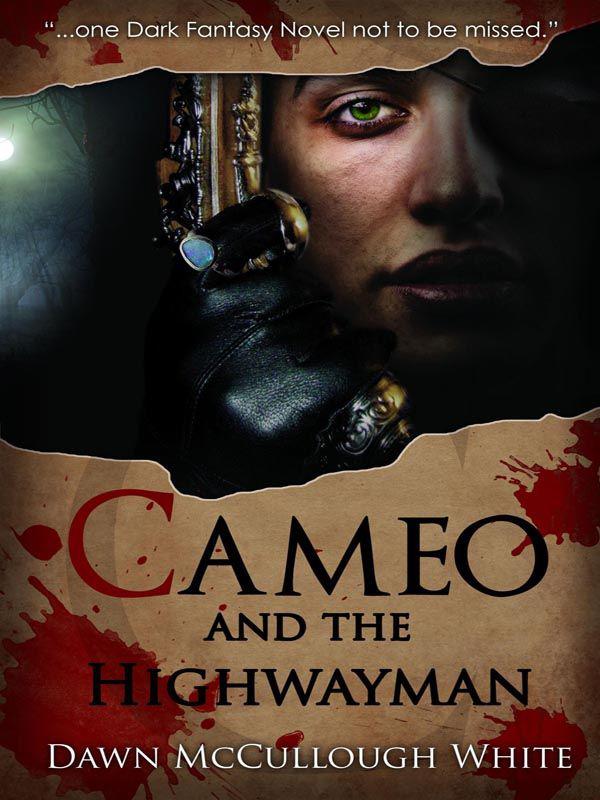 The characters and events in this book are fictitious. Any similarity to real persons, living or dead, is coincidental and not intended by the author. All rights reserved. No part of this publication can be reproduced or transmitted in any form or by any means, electronic or mechanical, without permission in writing from Dawn McCullough-White.

Book 2 - Cameo and the Highwayman

Preview of Cameo and the Vampire

Cameo and the Vampire Cover

Cameo and the Vampire Chapter 1

THE TRILOGY OF SHADOWS

Cameo and the Highwayman

T
HE DRIFTING SNOW GUSTED
up and around twenty young men. They had been pulled from their homes by soldiers fighting for the monarchy. Taken because they resembled Francois Mond, the architect of the rebellion.

Francois Mond himself had heard only that one of his young friends had been arrested, but when he followed the soldiers to the meadow just outside of the palace grounds, he saw his friend in the group in the swirling snow. He watched from a thicket as they were given spades and forced to dig a trench in the frozen soil. He bit his lip in frustrated horror as his childhood friend and the others were bayoneted, quietly, and shoved into the trench.

One soldier beat a young man to death with the spade as he attempted to crawl back out of his makeshift grave.

Francois turned away, clasping his hands over his eyes. He longed to kill Belfour’s soldiers, but he was alone, without a weapon, and he was afraid. If they ever caught him, they would draw and quarter him. It was the punishment reserved for regicide, and his speeches alone had helped turn the common people against the Belfour family. He thought of all the royalty who had been hung because he had a way with the quick turn of a phrase.

In the distance the soldiers had stopped to have sandwiches and brandy. He exhaled and watched his breath as it caught on the cold air, fighting the urge to vomit as the soldiers ate sandwiches over the open pit.

Black Opal looked out over the waves at the land in the distance: Shandow. He knew it well. An island off the north coast of Lockenwood, it was colder than the rest of the Kingdom of Sieunes.

From the distance he could see the snow-capped buildings and the heavy clouds; the sky was white. He clutched the lapels of his black duster close to his throat as freezing cold spume splashed over the edge of the ship.

“Whiskey?” Cameo shoved a bottle toward him.

He startled. She hadn’t been there a moment earlier.

She smiled good-naturedly at him and took a swig. “It will warm you up.”

He met her eyes and glanced down at her pink, smiling mouth, and then back up to her eyes again, his mind on the kiss they had shared only hours ago. Their first, and hopefully not last, kiss. Opal’s lips parted as if he were going to speak, but then only remained staring at her.

“Why Opal, whatever are you thinking?”

He bit his lip and tasted the rouge. It was a bit grainy and had the flavor of wax. “I was wondering about dinner and drink, and etcetera.”

She raised an eyebrow.

He tilted his head to the side and smiled at her. He was wearing that ostentatious hat, it’s large plumes soaked by the spray, and he clutched his coat for warmth. He looked ridiculous, and yet his delivery was so confident, so incredibly smooth. She followed the triangular shape of his shoulders down to his waist, never realizing how obvious she was as she did so. “Uh huh.” She pulled her old cape around her.

One of the sailors on board glanced at the Association badge she still wore, then lowered his eyes when she made eye contact with him as he moved past.

Opal covered his nose with a handkerchief, disgusted by the sailor’s proximity. “Heavens, the lads on this vessel are really quite foul.”

Cameo glanced over at Kyrian who was sitting on the deck holding one of Opal’s handkerchiefs to his head. He was staring out at the water, uncertain where the fates were taking him now.

Kyrian suddenly turned toward Cameo. He could feel her watching him.

Opal didn’t even bother to look over at him, “Probably his first voyage on a sailing ship.”

“Most likely,” she said, ignoring the obvious distain in his voice and moving over to the young man.

Kyrian smiled as she sat down beside him. He lowered the reddened kerchief and refolded it, allowing his long dark hair to be tossed about in the wind. “Do you think that what Haffef wants you to find will be here?”

The lad just smiled and reapplied the cloth to the gash on his head. “That’s why we’re going to Shandow, isn’t it?”

“How are you feeling?” she asked, ignoring his somewhat insightful queries about her vampire Master..

She looked at him thoughtfully. “When we get to Shandow, you won’t be associated with us anymore, lad. Think of that. You’ll be rid of us, and you can complete your education with the priesthood.”

“Shandow can be your fresh start. I’m certain Opal is planning one, and it will be so much easier for you. No one there has any idea you’ve been trekking about with us.”

Kyrian met Opal’s gaze; he seemed troubled. The lad looked from the dandy, who was behind Cameo, back at her. Then without warning, he vomited over the side of the ship.

Opal set foot on the shore at the port of Villoise, his custom-made boots pressing deep into the snow as he descended the steps and walked onto the docks. He grimaced as he looked about Villoise at the rather hardy individuals on the dock in their heavy clothing.

“The cold does disguise the smell of fish,” Cameo commented, as she came up behind him.

The dandy pulled his duster around himself, “Lovely.”

Cameo looked around nostalgically. “There used to be a tavern nearby.”

“Maybe a hot bath, and a tailor as well,” Opal muttered.

She shot him a look of amusement, “Not a fan of Villoise, Opal?”

He had half of his face hidden in the collar of his duster. “It’s too cold here.”

“But so beautiful,” Kyrian said as he walked behind the two of them. “Like something out of a story,” his voice trailing off as he gazed at the store windows painted with ice and framed with a crisp edge of snow.

Cameo glanced over at the store he was pointing at. She remembered one of the royal family, a noose around his neck, hanging from the porch of that particular store during the revolution.

She tried to put that memory out of her mind.

Opal glanced over at it, “Uhh, no, let’s get an inn. I certainly think we’ve been through enough sleeping on the ground lately, don’t you?”

Kyrian was surprised that the dandy had turned around and was actually addressing him. “Me?”

“Yes, you.” Opal’s mouth twisted up into a half-formed smile.

“And you, my dear?” the highwayman cut off Kyrian and swung back to speak to Cameo.

“Do you know a good inn around here?” she asked skeptically.

He nearly laughed. “Yes. There used to be a nice little place on the water here.” He pointed down the street, “Is that it? No, it must be a little further down. I think it was called The Starlight or something like that.”

“How long ago was that?”

Black Opal readjusted his hat, “Probably before you were born.”

“Wow, that was a long time ago!” Kyrian said, sounding astounded, much to the displeasure of Opal.

Opal glanced at Cameo. “Yes, I think that was the place.”

“Right there,” she nodded to the right.

There was a large, two-story building that seemed to dwarf the others, even with their facade fronts. It had a small front lawn with a white picket fence. A pretty little sign that proclaimed itself The Lakestar swung gently in the cold breeze.

Opal’s face seemed to soften as he looked at it. He smiled to himself.

“Seems to have stood the test of time,” Cameo muttered.

Kyrian moved ahead of the two of them who were still just staring at the inn, as if they had fallen through a crack in time.

“It looks exactly like it did the last time I was here,” she remarked. “Well, I’m thirsty. Are you coming?”

The highwayman took several faltering steps forward, uncertainly. His fingers brushed the picket fence almost with reverence as he inched closer to the path that led within.

As he mounted the steps, he could hear the faint sound of a hammer dulcimer, and that was what finally drew him in.

Inside, the place was rich with color, dark wood floors and vases of flowers in the entryway. A large portrait of a young woman and her cat hung behind a large antique desk where a old lady was sitting, sorting through some paperwork.

“Can I help you?” She looked over her glasses at Black Opal.

He opened his mouth, but nothing came out, much to the surprise of both Cameo and Kyrian.

“We need a room,” Kyrian said, still looking over his shoulder at Opal.

Cameo glanced back at Opal but he was looking at a portrait of a man dressed in the garb of the rebellion and paying no attention to her.

The lady nodded, then looked from Kyrian to Cameo, and the trail of red clay he had walked into her establishment. “We have a laundry service here as well.”

Opal wandered into the suite. It was dark and lovely inside. He moved to open the curtains and let the sun in. They had managed to get the best room in the house, one right on the water. He slid off his duster and looked down into the sparkling harbor below. There was a light rap at the door, and Cameo came sauntering in.

Opal threw his duster onto the canopy bed.

“Well, well, well,” she said, perusing their room. “Marble fireplace… and what’s this? A little piano?”

She examined the piece, highlighted with gold, with some sort of pastoral scene painted on the underside of the top.

“Oh?” Opal said as he crossed the room.

“Hmm.... One wonders how it might have come to be owned by this little inn.”

“The Lakestar has been in business for years; perhaps they bought it.”

“Perhaps.” She helped herself to a decanter of red alcohol. “Perhaps they acquired it during the rebellion? The Belfours obviously haven’t missed it though.”

Opal sat down on the harpsichord bench and punched a couple keys.

He looked away from her and back at the instrument before him. It had been a long time, but somehow his fingers remembered. A few notes… a few more, then the sweeping beauty of the melody was filling the room. He hadn’t planned to play quite so much, but his body had apparently longed to perform the entire harpsichord piece.