Read The Lays of Beleriand Online

The Lays of Beleriand 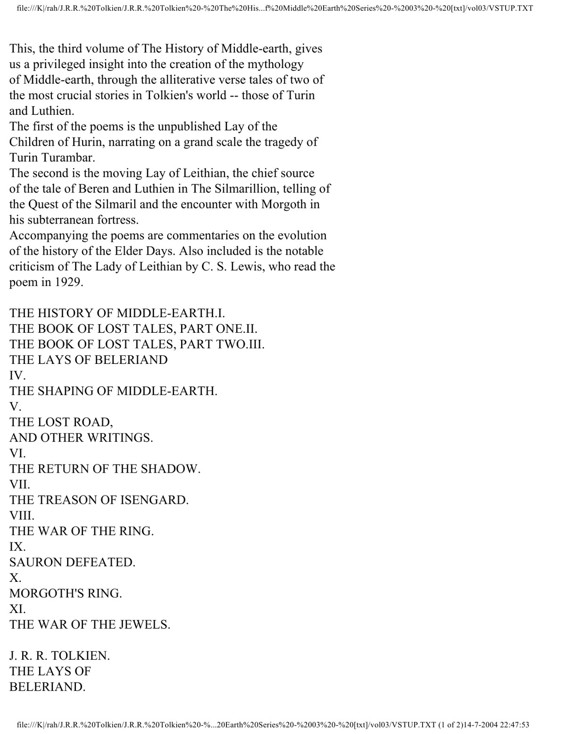 This, the third volume of The History of Middle-earth, gives us a privileged insight into the creation of the mythology of Middle-earth, through the alliterative verse tales of two of the most crucial stories in Tolkien's world -- those of Turin and Luthien.

The first of the poems is the unpublished Lay of the Children of Hurin, narrating on a grand scale the tragedy of Turin Turambar.

The second is the moving Lay of Leithian, the chief source of the tale of Beren and Luthien in The Silmarillion, telling of the Quest of the Silmaril and the encounter with Morgoth in his subterranean fortress.

Accompanying the poems are commentaries on the evolution of the history of the Elder Days. Also included is the notable criticism of The Lady of Leithian by C. S. Lewis, who read the poem in 1929.

THE LAYS OF BELERIAND

THE SHAPING OF MIDDLE-EARTH.

THE RETURN OF THE SHADOW.

THE TREASON OF ISENGARD.

THE WAR OF THE RING.

THE WAR OF THE JEWELS.

Previously published in paperback by Grafton 1992

First published in Great Britain by

The text of the commentary by C. S. Lewis

executors of the estate of the late

The Guernsey Press Co. Ltd, Guernsey, Channel Islands All rights reserved. No part of this publication may be reproduced, stored in a retrieval system, or transmitted, in any form or by any means, electronic, mechanical, photocopying, recording or otherwise, without the prior permission of the publishers.

This book is sold subject to the condition that it shall not, by way of trade or otherwise, be lent, re-sold, hired out or otherwise circulated without the publisher's prior consent in any form of binding or cover other than that in which it is published and without similar condition including this condition being imposed on the subsequent purchaser.

I THE LAY OF THE CHILDREN

Second Version of the Lay:

I (Hurin and Morgoth)

The Flight of the Noldoli

Fragment of an alliterative Lay of Earendel

The Lay of the Fall of Gondolin

THE LAY OF LEITHIAN

VII (Beren and Felagund before Thu)

IX (The defeat of Thu)

X (The attack by Celegorm and Curufin)

XI (The disguising of Beren and Luthien and

the journey to Angband)

XII (Fingolfin and Morgoth; the meeting with

XIII (Beren and Luthien in Angband)

Glossary of Obsolete, Archaic, and Rare Words and Meanings

This third part of 'The History of Middle-earth' contains the two major poems by J. R. R. Tolkien concerned with the legends of the Elder Days: the Lay of the Children of Hurin in alliterative verse, and the Lay of Leithian in octosyllabic couplets. The alliterative poem was composed while my father held appointments at the University of Leeds (1920 -- 5); he abandoned it for the Lay of Leithian at the end of that time, and never turned to it again. I have found no reference to it in any letter or other writing of his that has survived (other than the few words cited on p. 3), and I do not recollect his ever speaking of it. But this poem, which though extending to more than 2000 lines is only a fragment in relation to what he once planned, is the most sustained embodi-ment of his abiding love of the resonance and richness of sound that might be achieved in the ancient English metre. It marks also an important stage in the evolution of the Matter of the Elder Days, and contains passages that strongly illumine his imagination of Beleriand; it was, for example, in this poem that the great redoubt of Nargothrond arose from the primitive caves of the Rodothlim in the Lost Tales, and only in this poem was Nargothrond described. It exists in two versions, the second being a revision and enlargement that proceeds much less far into the story, and both are given in this book.

My father worked on the Lay of Leithian for six years, abandoning it in its turn in September 193 I. In 1929 it was read so far as it then went by C. S. Lewis, who sent him a most ingenious commentary on a part of it; I acknowledge with thanks the permission of C. S. Lewis PTE Limited to include this.

In 1937 he said in a letter that 'in spite of certain virtuous passages' the Lay of Leithian had 'grave defects' (see p. 366). A decade or more later, he received a detailed, and remarkably unconstrained, criticism of the poem from someone who knew and admired his poetry. I do not know for certain who this was. In choosing 'the staple octosyllabic couplet of romance,' he wrote, my father had chosen one of the most difficult of forms 'if one wishes to avoid monotony and sing-song in a very long poem. I am often astonished by your success, but it is by no means consistently maintained.' His strictures on the diction of the Lay included archaisms so archaic that they needed annotation, distorted order, use of emphatic doth or did where there is no emphasis, and language sometimes flat and conventional (in contrast to passages of 'gorgeous description'). There is no record of what my father thought of this criticism (written when The Lord of the Rings was already completed), but it must be associated in some way with the fact that in 1949 or 1950 he returned to the Lay of Leithian and began a revision that soon became virtually a new poem; and relatively little though he wrote of it, its advance on the old version in all those respects in which that had been censured is so great as to give it a sad prominence in the long list of his works that might have been. The new Lay is included in this book, and a page from a fine manuscript of it is reproduced as frontispiece.

The sections of both poems are interleaved with commentaries which are primarily concerned to trace the evolution of the legends and the lands they are set in.

The two pages reproduced from the Lay of the Children of Hurin (p. 15) are from the original manuscript of the first version,

The two earlier volumes in this series (the first and second parts of The Book of Lost Tales) are referred to as 'I' and 'II'. The fourth volume will contain the 'Sketch of the Mythology' (1926), from which the Silmarillion 'tradition' derived; the Quenta Noldorinwa or History of the Noldoli (1930); the first map of the North-west of Middle-earth; the Ambarkanta ('Shape of the World') by Rumil, together with the only existing maps of the entire World; the earliest Annals of Valinor and Annals of Beleriand, by Pengolod the Wise of Gondolin; and the fragments of translations of the Quenta and Annals from Elvish into Anglo-Saxon by AElfwine of England.

THE LAY OF THE

There exists a substantial manuscript (28 pages long) entitled 'Sketch of the Mythology with especial reference to "The Children of Hurin"', and this 'Sketch' is the next complete narrative, in the prose tradition, after the Lost Tales (though a few fragmentary writings are extant from the intervening time). On the envelope containing this manuscript my father wrote at some later time:

R. W. Reynolds taught my father at King Edward's School, Birming-ham (see Humphrey Carpenter, Biography, p. 47). In a passage of his diary written in August 1926 he wrote that 'at the end of last year' he had heard again from R. W. Reynolds, that they had corresponded subsequently, and that he had sent Reynolds many of his poems, including Tinuviel and Turin ('Tinueiel meets with qualified approval, it is too prolix, but how could I ever cut it down, and the specimen I sent of Turin with little or none'). This would date the 'Sketch' as originally written (it was subsequently heavily revised) definitely in 1926, probably fairly early in the year. It must have accompanied the specimen of Turin (the alliterative poem), the background of which it was written to explain, to Anacapri, where Reynolds was then living in retirement.

My father took up his appointment to the Professorship of Anglo-Saxon at Oxford in the winter term (October -- December) of 1925, though for that term he had to continue to teach at Leeds also, since the appointments overlapped. There can be no doubt that at any rate the great bulk of the alliterative Children of Hurin (or Turin) was completed at Leeds, and I think it virtually certain that he had ceased to work on it before he moved south: in fact there seems nothing to oppose to the natural assumption that he left 'Turin' for 'Tinuviel' (the Lay of Leithian), which he began according to his diary in the summer of 1925

For the date of its commencement we have only my father's later (and perhaps hesitant) statement that it was 'begun c. 1918'. A terminus a quo is provided by a page of the earliest manuscript of the poem, which is written on a slip from the Oxford English Dictionary bearing the printer's stamp May 1918. On the other hand the name Melian which occurs near the beginning of the earliest manuscript shows it to be later than the typescript version of the Tale of Tinuviel, where the Queen's name was Gwenethlin and only became Melian in the course of its composition (II. 51); and the manuscript version of that Tale which underlies the typescript seems itself to have been one of the last completed elements in the Lost Tales (see I. 204).

The Children of Hurin exists in two versions, which I shall refer to as I and II, both of them found in manuscript and later typescript (IA, IB; IIA, IIB). I do not think that the second is significantly later than the first; it is indeed possible, and would not be in any way uncharacteristic, that my father began work on II while he was still composing at a later point in I. II is essentially an expansion of I, with many lines, and blocks of lines, left virtually unchanged. Until the second version is reached it will be sufficient to refer simply to 'A' and 'B', the manuscript and typescript of the first version.

The manuscript A consists of two parts: first (a) a bundle of small slips, numbered 1 -- 32. The poem is here in a very rough state with many alternative readings, and in places at least may represent the actual beginnings, the first words written down. This is followed by (b) a set of large sheets of examination paper from the University of Leeds, numbered 33 ff., where the poem is for the most part written out in a more finished form -- the second stage of composition; but my father wrote in line-numbers continuously through (a) and (b) -- lines 1 -- 528 in (a), lines 528 ff. in (b). We have thus one sole text, not two, without any overlap; and if (a), the slips, ever existed in the form of (b), the examination sheets, that part has disappeared. In part (b) there are many later emendations in pencil.

The Protectors by Dowell, Trey
The Tail of the Tip-Off by Rita Mae Brown
X's for Eyes by Laird Barron
The Tilted World by Tom Franklin, Beth Ann Fennelly
Scorched - Book Four - The Surrender Series by Anne, Melody
The Dark Place by Sam Millar
Winning Her Love by Hazel Gower
Lakeshore Christmas by Susan Wiggs
Sweet Masterpiece - The First Samantha Sweet Mystery by Connie Shelton
The Beginning of Always by Sophia Mae Todd