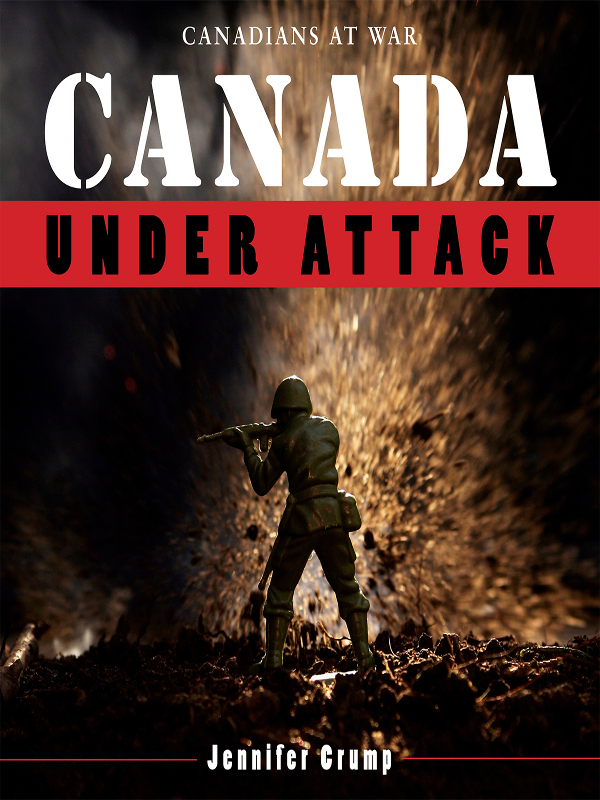 All rights reserved. No part of this publication may be reproduced, stored in a retrieval system, or transmitted in any form or by any means, electronic, mechanical, photocopying, recording, or otherwise (except for brief passages for purposes of review) without the prior permission of Dundurn Press. Permission to photocopy should be requested from Access Copyright.

Canada under attack : Canadians at war / by Jennifer Crump.

Care has been taken to trace the ownership of copyright material used in this book. The author and the publisher welcome any information enabling them to rectify any references or credits in subsequent editions.

Printed and bound in Canada.
Printed on recycled paper.
www.dundurn.com

To Alex, Laura, Emily, Alexandria, Kathleen, and Danielle.
For everything you do.

In a December 2005 article in the
Washington Post
, journalist Peter Carlson concluded that while, “invading Canada is an old American tradition ... Invading Canada successfully is not.” Carlson made that observation while covering a story on the declassification of War Plan Red, a 1935 document outlining the most recent U.S. plans to invade Canada.

Carlson may have had a point. Canada has been the scene of many invasions throughout its history. Our rich natural resources, kilometres of coastline, diplomatic ties, and proximity to the United States have made us a tempting target for the Americans and for other countries. Britain, France, Germany, Spain, Japan, and even Canadians themselves have launched invasions.

Some of these wars have been waged as part of a much larger conflict; others have focused on more local concerns. Wars that started on the European continent have frequently spread to Canadian shores and several have been concluded on Canadian soil. The Seven Years War involved nearly every major power in Europe and has been referred to as the first “world war.” Battles were fought in Europe, Africa, and Asia, and on Canadian soil when the French attacked St. John's and the British invaded Louisbourg and Quebec City.

Some invasions occurred as part of a larger North American crisis like the American Revolution. Others began as local squabbles that erupted into global incidents. The Nootka Crisis began as a battle over a small patch of coastline on Vancouver Island and brought Britain, Spain, Germany, the Netherlands, and France to the brink of war. The Nootka Crisis claimed few lives, the Aroostook War none, but other major invasions like the War of 1812 took thousands of lives. The Battle of the St. Lawrence lasted for three years, the invasion of James Bay just a few days.

CHAPTER ONE:
THE BATTLES OF THE BAYS

For centuries the ships of numerous countries visited Canada's eastern shores to reap the riches they found there. They would sail back to their home ports with their holds full and purses fat with profit. Norse, Italian, Spanish, Portuguese, British, and French fishermen all plied the waters near present-day Newfoundland. Some of the more adventurous among them would venture deeper into Canada, exploring its rivers and great inland seas in the hunt for furs.

Inevitably, they would clash.

While the Norsemen quickly abandoned the eastern shores of Canada and the Italians, Spanish, and Portuguese never settled the area, the French and English were soon engaged in a race to control the lucrative fishery and fur trade. Their approaches were initially quite different. The French preferred to have the furs delivered to them at Montreal, while the English preferred to set up shop closer to where the furs were. In 1670, the Hudson's Bay Company was created and its founders established Fort Charles on Hudson Bay. As the company expanded, they built additional posts at the mouths of the Moose and Albany rivers on James Bay. During the winter the posts were abandoned as the traders returned to Britain with their ships full of furs of every description. The French sent their own expedition to the area and made a show of claiming the land in their king's name, but there were no Englishmen there to witness it and whatever Native witnesses were in the area probably found the ceremony perplexing rather than threatening. For the next 10 years, the French and English traders grew more competitive although there were no outward signs of aggression until 1682, when traders from Britain, France, and New England all tried to claim the same trading post. The French won the initial argument but were pushed out by the British two years later.

In 1686, the new governor of New France, Jacques RenÃ© de Brisay Denonville, decided to avenge this challenge to French sovereignty and to once and for all put an end the English presence on what he considered to be French soil. When the French government refused to lend him naval support he decided to organize and fund his own audacious overland attack on the Hudson's Bay Company posts on James Bay. In March 1686, Chevalier Pierre de Troyes was chosen to lead the attack. De Troyes began to gather provisions and recruit troops; 100 men would eventually join the expedition. Among them was the infamous Pierre le Moyne D'Iberville and two of his equally famous brothers. D'Iberville was one of 12 children born to one of the wealthiest citizens of Montreal, Charles le Moyne. Like his brothers, Pierre was a career soldier and a dedicated adventurer.

Charles le Moyne de Longueuil et de ChÃ¢teauguay, was an adventurer, businessman,
and considered the wealthiest man in Canada during his lifetime. His 12 children,
the le Moyne brothers, would become the most famous sons of early Canada. They
found fame in the military as thorns in the sides of both the English and the Spanish,
in politics as governors, and as the founders of several of the earliest settlements in
North America. With an intriguing mix of personal ambition, respect for Native
peoples, and intense loyalty to French Canada, they left a lasting legacy.

Following his successes in Hudson Bay and Newfoundland, Pierre le Moyne con-
tinued his adventures by founding Louisiana and the city of Biloxi, Mississippi. His
eldest brother, Charles, achieved both military and political fame, receiving the title
of baron and the successive governorships of Three Rivers and Montreal. Another
brother, Jacques, was a respected warrior who whetted his military appetite by accom-
panying Pierre on his missions, subsequently gaining the respect of the French regu-
lars, militia, and especially their Native allies. In 1689 he led a tiny force of less than
200 men in a successful attack on a British force of more than 1,300 on the banks of
the Saint-Charles River. Jacques and his men routed the British but he was mortally
wounded in the fight. When word of his death reached the Iroquois they released two
captives in his honour.

Pierre's younger brother Paul accompanied him to Hudson Bay, famously lead-
ing a mission in which he captured a large English ship with only two small canoes.
Paul also accompanied Jacques against the English invaders on the Saint-Charles
River and helped defeat the Iroquois. He had spent many of his early years with the
Iroquois and spoke their language fluently. Like several of his brothers, he developed a
canny ability to undermine the English efforts to win the Iroquois over to their cause,
alternately cajoling, bribing, and threatening during the councils of war he was
regularly invited to join. Paul-Joseph, another brother, enjoyed an equally close rela-
tionship with Canada's Native peoples. He became governor of Detroit, Three Rivers,
and Quebec City and rose rapidly in the military serving in France and Canada.
At the age of 50, when many of his fellow officers retired, he was tasked with negotiat-
ing the terms of peace with the Iroquois, who considered him a blood bother. Another
younger brother Jean-Baptiste founded Mobile, Alabama, and New Orleans, and
served as governor of Louisiana, leading the French there against the Spanish and
capturing the Spanish fort at Pensacola (Florida). Jean-Baptiste was one of the few le
Moyne brothers to enjoy a peaceful retirement. Eventually recalled to France, he lived
on generous pension granted to him by the king until the age of 88.

Kate Sherwood - Dark Horse 01 - Dark Horse by Kate Sherwood
Torch Scene by Renee Pawlish
The Mermaid Garden by Santa Montefiore
Another Shot At Love by Niecey Roy
The Secret of Raven Point by Jennifer Vanderbes
Shivaree by J. D. Horn
For the Pleasure of Men by Nora Weaving
Ghost Canoe by Will Hobbs
Death of a Darklord by Laurell K. Hamilton
Comrades of War by Sven Hassel