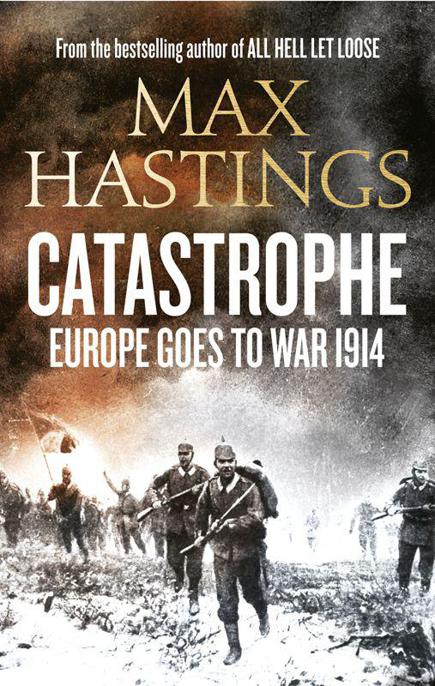 For
PENNY
who does the real work

The Organisation of Armies in 1914

1. ‘A Feeling that Events are in the Air’

2. The Descent to War

3. ‘The Superb Spectacle of the World Bursting Into Flames’

4. Disaster on the Drina

5. Death with Flags and Trumpets

1. THE EXECUTION OF PLAN XVII

8. Tannenberg: ‘Alas, How Many Thousands Lie There Bleeding!’

9. The Hour of Joffre

10. The Nemesis of Moltke

2. ‘STALEMATE IN OUR FAVOUR’

2. ‘INVENTIONS OF THE DEVIL’

15. Ypres: ‘Something that was Completely Hopeless’

16. ‘War Becomes the Scourge of Mankind’

Images of the campaigns of 1914 are rare. Those professing to portray combat are often posed or faked, and many contemporary captions are wilfully or accidentally inaccurate. The pictures in this book have been chosen with these realities in mind, to give the most vivid possible impression of what the battlefields looked like, while recognising that few can be appropriately placed and dated, while some predate the war.

French troops, before the deluge (© Roger-Viollet/Topfoto).

The Middlesex under fire (R.C. Money. LC GS 1126. Reproduced with the permission of Leeds University Library)

A family flees a battlefield (Mirrorpix)

While every effort has been made to trace the copyright holders of photographs, in some cases this has not proved possible. The author and publishers would welcome any information that would enable such omissions to be rectified in future editions.

Author’s note: The movements of the vast armies in 1914 were so complex that it is impossible to depict them cartographically in detail. In these maps I have striven for clarity for non-specialist readers, for instance by omitting divisional numbers except where essential. They are generally based upon the maps in Arthur Banks’s
A Military Atlas of the First World War
(Heinemann, 1975).

The German advance through Belgium, August 1914

A View of the Eastern Front

The Russian advance into East Prussia

The Battle of Tannenberg: the final act

The German armies in retreat towards the Aisne

The allied withdrawal to the Yser–Lys position, 9–15 October 1914

The First Battle of Ypres: the first moves

Approximate positions on the Eastern and Western Fronts, December 1914

As commandant of the British Army’s staff college in 1910, Brigadier-General Henry Wilson asserted the likelihood of a European war, and argued that Britain’s only prudent option was to ally itself with France against the Germans. A student ventured to argue, saying that only ‘inconceivable stupidity on the part of statesmen’ could precipitate a general conflagration. This provoked Wilson’s derision: ‘Haw! Haw! Haw!!! Inconceivable stupidity is just what you’re going to get.’

‘We are readying ourselves to enter a long tunnel full of blood and darkness’
ANDRÉ GIDE
, 28 July 1914

A bantering Russian foreign ministry official said to the British military attaché on 16 August: ‘You soldiers ought to be very pleased that we have arranged such a nice war for you.’ The officer answered: ‘We must wait and see whether it will be such a nice war after all.’

Winston Churchill wrote afterwards: ‘No part of the Great War compares in interest with its opening. The measured, silent drawing together of gigantic forces, the uncertainty of their movements and positions, the number of unknown and unknowable facts made the first collision a drama never surpassed. Nor was there any other period in the War when the general battle was waged on so great a scale, when the slaughter was so swift or the stakes so high. Moreover, in the beginning our faculties of wonder, horror and excitement had not been cauterized and deadened by the furnace fires of years.’ All this was so, though few of Churchill’s fellow participants in those vast events embraced them with such eager appetite.

In our own twenty-first century, the popular vision of the war is dominated by images of trenches, mud, wire and poets. It is widely supposed that the first day of the 1916 Battle of the Somme was the bloodiest of the entire conflict. This is not so. In August 1914 the French army, advancing under brilliant sunshine across a virgin pastoral landscape, in dense masses clad in blue overcoats and red trousers, led by officers riding chargers, with colours flying and bands playing, fought battles utterly unlike those that came later, and at even more terrible daily cost. Though French losses are disputed, the best estimates suggest that they suffered well over a million casualties
fn1
in 1914’s five months of war, including 329,000 dead. One soldier whose company entered its first battle with eighty-two men had just three left alive and unwounded by the end of August.

Realm Of Blood And Fire (Book 3) by Dionne Lister
Mrs. Malory and Any Man's Death by Holt, Hazel
Branded by Lust: 4 (Night Seekers) by Holt, Desiree
Maldito amor by Marta Rivera De La Cruz
Cold Gold by Victoria Chatham
Am001 by Audiation
City of the Sun by Juliana Maio
The Pursuit of Pearls by Jane Thynne
Hotel Moscow by Talia Carner
Surface Tension by Meg McKinlay