Caught in the Undertow (Hawaiian Crush #6) 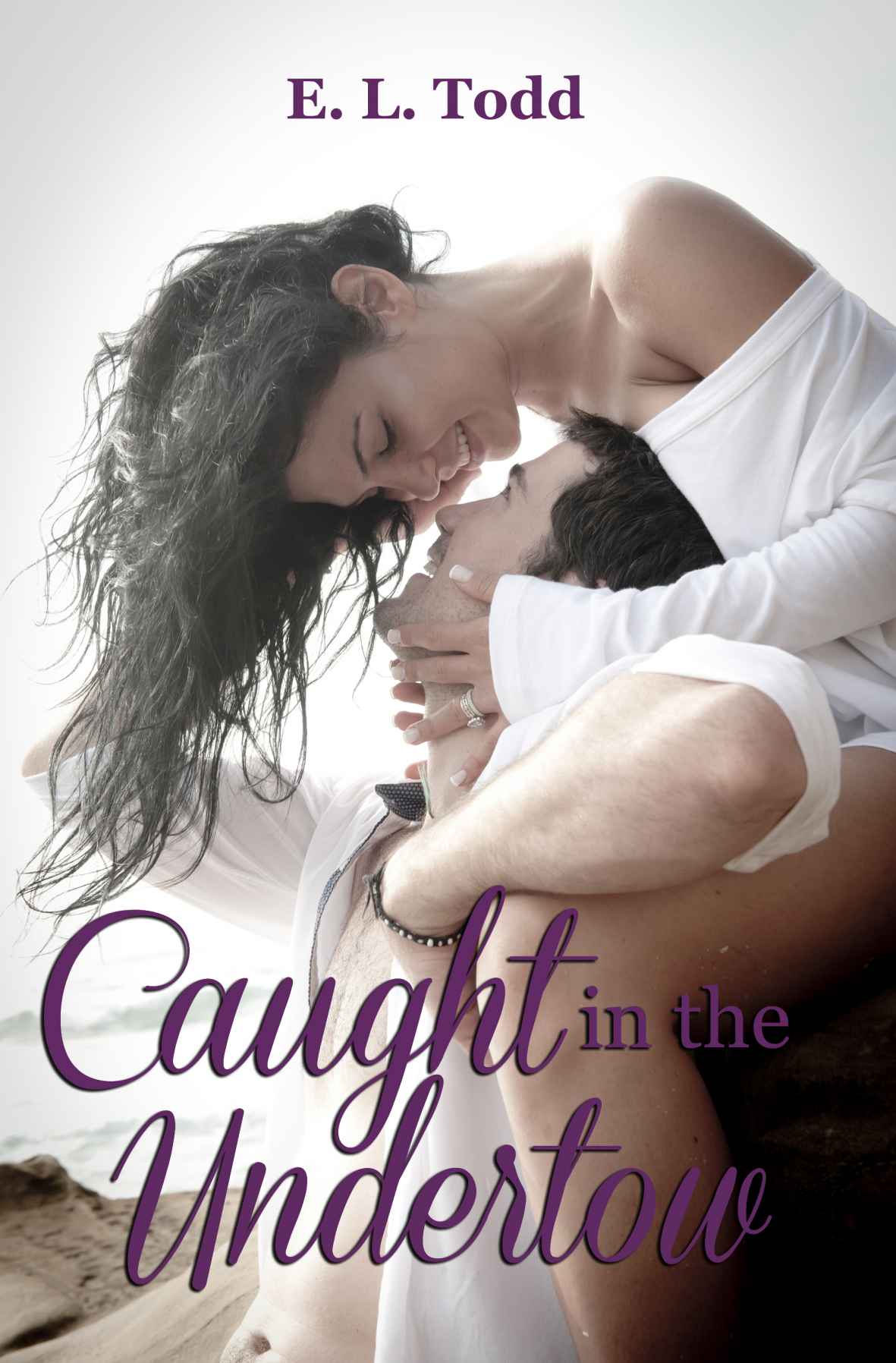 Caught in the Undertow

This is a work of fiction. All the characters and events portrayed in this novel are fictitious or used fictitiously. All rights reserved. No part of this book may be reproduced in any form or by any electronic or mechanical means, including information storage and retrieval systems, without written permission from the publisher or author, except in the case of a reviewer, who may quote brief passages in a review.

Caught in the Undertow

“Sydney, where did you put the data sheets?” Dr. Goldstein asked.

Sydney appea
red from behind the aisles. “It’s in the raw data binder, Dr. Goldstein.”

“Oh yeah…old habits die hard,” she said with a laugh.

Gilbert opened the binder and flipped through the pages. “I found it.”

“Phew,” she said. “I was pretty certain I kept it in there.”

“Could you make sure all the glassware is cleaned before you go?” he asked while
he made notes in the binder.

“Already did,” she said with a smile.

“Well, I need this data made into a spreadsheet along with a few charts.”

She wal
ked to him and extended the document. “Already completed.”

He looked at her, amazement in his eyes. “
Syd, I can’t keep up with you.”

Her cheeks blushed. “I always give my best effort.”

Gilbert shook his head. “I’m not sure what you see in my nephew. His brains are the size of breadcrumbs compared to yours.”

She laughed. “He’s very smart—just not as motivated.”

“Yeah, that’s what it is,” he said sarcastically. “I guess he’s smart for marrying you. I’ll give him that.”

“How’s the married life?” he asked while he restacked the binder. “Do you want to kill him yet? I wouldn’t judge you if you divorced him.”

“If you need me to smack him around, just let me know.”

He laughed. “I’m very glad you’re my research assistant. Normally, I take on a Ph.D. candidate, but I have to admit, you’re much better. I don’t think I’ve ever worked with someone who was so intelligent.”

Sydney averted her gaze and clenched her hands together, feeling more pride than ever before. “I’m glad you like having me here.”

“Working with you has been a dream. I think I have a good chance of getting into a Ph.D. program because
of this experience.”

He smiled at her. “Honey, you had a good chance anyway. Where do you want to go?”

“Well, I would prefer to stay here. Coen has his job and he may finish a semester after me.”

He nodded. “The university in Monterey, California has a fine program. The trenches along the coast are the deepest on the planet. They are buzzing with undiscovered life. And you couldn’t go wrong with the barrier reef by Australia.”

Sydney’s eyed widened. “I would love that. But I’m married and I have to think of Coen.”

He shook his head. “Who cares about that
knucklehead.”

“Nah. I love that kid to death. He and Jordan are the sons I never had. I’m very happy that he found you, Syd. I’m not totally ignorant to Coen’s actions. I know he used to have a lifestyle very different than the one he has today. I’m glad you straightened him out.”

Sydney didn’t know what to say to that. It was an awkward topic.

“I’m headed to Vivian’s for dinner. Would you like to join?”

He put aside his binders and locked up the room. Sydney followed behind him with her bag over her shoulder. When she got outside, she looked down the dark hallway. Memories of her time working as a janitor came to her mind. She, Henry, and Nancy used to have so much fun being together, picking up the penguin poop and cleaning the windows. Now they all went their separate ways. Nancy was an artist, Henry was a writer, and she was a researcher. Everything worked out.

She walked to her jeep in the parking lot, and Gilbert made sure she got inside before he started his car. They drove to Vivian’s house and parked outside. When they walked through the door, Sydney’s mother-in-law jumped up and down.

“What a wonderful surprise,” she said as she hugged Sydney. “Hello, dear.”

She pulled away and looked at Sydney. “It’s Mom.”

Vivian gave her a warm smile and patted her on the back. “We’re just about to eat dinner.”

Jordan came down the hall and hugged Sydney. “Hey, what are you doing here?”

Jordan nodded. “This is even better. Coen’s annoying anyway.”

Sydney laughed. “Well, that was sweet.”

They went to the dinner table and sat down.

Coen’s dad smiled at her. “Hey, glad you could join us. I prefer you over Coen anyway.”

“That makes two us,” Gilbert said as he dug into his food.

“How was work?” Vivian asked Gilbert.

Gilbert wiped his mouth. “It’s a little embarrassing when you realize your apprentice is a lot smarter than you.”

“After my first biology exam, I dropped out of the class,” Jordan said, shoveling food into his mouth. “I knew it wasn’t for me.”

Jordan laughed. “You got a point.”

“What are you majoring in now?” Sydney asked.

“Business,” Jordan said. “I’m going to go into construction like my dad, expand the empire.”

“Money, what’s it like to have that?” Gilbert asked with a laugh. He looked at Sydney. “I’m glad Sydney is in this profession because of the passion, not the income. She won’t be making anything.”

Sydney ate a piece of bread. “As long as I have that shack, I’ll be fine.”

“And Coen will take care of her,” Nathan said. “I know I raised my son right.”

Sydney smiled. “He does a very good job.” She ate her asparagus and another roll, loving the fact that no one berated her for being a vegetarian. She was usually teased for it by people
she met, but none of them ever commented on it.

“Is my son being a good man?” Vivian asked.

“When he picks up his dirty socks and cleans up after himself,” Sydney said with a laugh.

Vivian smiled. “I’m glad you put him in his place, dear. He needs a woman like that.”

Sydney shrugged. “It was the thought that counted.”

“What did you end up eating?” Jordan asked.

“We got tacos instead,” Sydney said.

Vivian shook her head. “Nathan could never cook either. Now we have a policy; only I’m allowed in the kitchen.”

“Well, I can build a house,” Nathan said. “That’s a lot harder than cooking.”

Gilbert rolled his eyes.
“True love at its finest.”

Sydney laughed at his jab.

Jordan turned toward her. “Hey, do you have any single friends yet?”

“None
that are young enough for you.”

“Any new janitors at the aquarium?”

She shook her head. “Sorry.”

“I don’t want to get married,” he said quickly. “I just want to meet girls.” He winked at her.

“I hope my second son grows out of it as well,” Vivian said.

Sydney finished her plate then sat quietly while everyone else finished. She didn’t feel awkward spending time with Coen’s family without him. She felt welcomed and appreciated among them, like she was one of them.

When they moved into the living room to watch TV, Sydney headed to the door. “I should get home.”

Vivian hugged her. “Love you, honey.”

Vivian pulled away and smiled at her.

“I get one too,” Nathan said. He hugged her tightly. “Come over more often—without Coen.”

“And bring a friend!” Jordan shouted.

Sydney laughed again. “I’ll see you later.” She got inside her Jeep then drove back to the shack. When she pulled up to the house, she saw the lights shine through the window. She stayed
at his parents’ house longer than she meant to. It was already late.

She walked inside then
saw Coen sitting at the kitchen table. He stood up when he saw her, wearing a t-shirt and shorts.

“I was just about to call you,” he said as he approached her.

He cupped her face then pulled her hair back. “How was your day?”

“Shitty until you came home.” He pressed his face close to hers then wrapped his arms around her. His breaths fell on her sk
in, warm and heavy. Even though they’d been married for months, the heat between them never died. The heat always burned between her legs when she was alone with him. She could feel the same tension emit from him.

Coen pulled her to his chest then moved his hands up her shirt, feeling the skin of her waist. “What took you so long?” he whispered.

“Your uncle and I were working late then we went to your parents’ house for dinner.”

“Without me?” he asked incredulously.

He sighed. “I knew this would happen.”

“My family likes you more than they like me.”

“Those assholes,” he said with a smile. “But I can’t hold it against them. But an invite would have been nice.”

“Your husband has been hungry all night.”

“I know my husband can feed himself. He’s a caveman, but he knows how to do a few things.”

“I didn’t mean I was hungry for food.” The meaning of
his words fell heavily on her ears. When he moved his hips against her, she felt his erection pressed against her stomach. Sydney had homework to do and needed to get ready for school in the morning, but now she forgot about it.

Coen moved his hands under shirt then felt her bra, squeezing it with his large hands. Her breathing hitched as she felt him. Every time they made love, it felt like the first time. Coen rubbed his nose against hers as his hands unclasped the bra, allowing his hands to grip her bare tits. He loved her breasts, loved touching them and kissing them. He didn’t know what he liked more, her chest or her ass. Coen squeezed her then rubbed his thumbs over the nipples. Sydney felt her heart race as her husband touched her.

Coen pulled her shirt off then removed her bra. She stood in just her shorts, her top bare. Coen stared at her flat stomach, feeling the soft skin with his hands. Her abdominal muscles were prevalent, strong and noticeable. He loved the strength of her body. She wasn’t weak and limber. She was powerful and beautiful like a real woman. She was his ideal fantasy, someone that was just as beautiful on the inside as well as the outside. He kneeled and kissed her stomach, worshipping his wife and the ground she walked on. She was his queen, his goddess, and he never grew tired of praising her.

Ultimate Engagement by Lydia Rowan
A Dance at the Slaughterhouse by Lawrence Block
Some Like It Charming (A Temporary Engagement) by Bryce, Megan
The Tracker's Dilemma: (A Mandrake Company Science Fiction Romance) by Ruby Lionsdrake
The Forever Man: A Near-Future Thriller by Pierre Ouellette
The Silver Fox and the Red-Hot Dove by Deborah Smith
Whiskey Sour by Liliana Hart
The Cowboy Next Door (The Cash Brothers) by Thomas, Marin
Dig by Corwin, C.R.
Her Unlikely Family by Missy Tippens