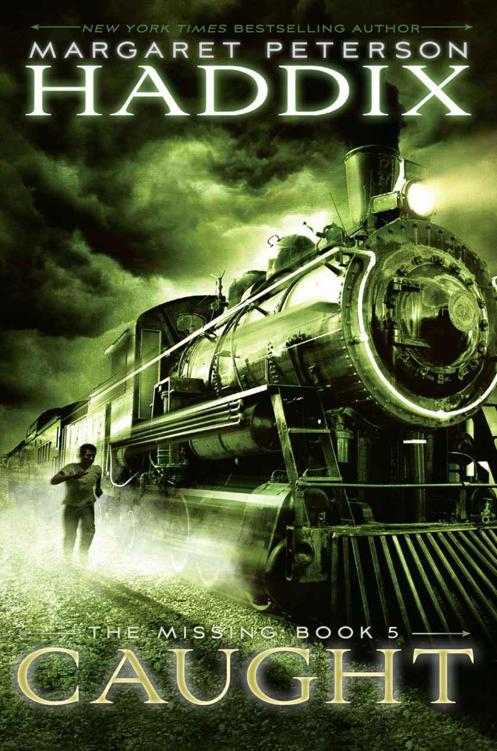 For Tori and Andrew

Jonah Skidmore was in science class when time stopped.

It was mid-November, so Jonah had already had three full months of seventh-grade science with Mr. Stanley. He almost could have believed that time stopped every day in Mr. Stanley’s class—or at least slowed down so much that every millisecond crawled by at a turtle’s pace. Mr. Stanley was an old man with gray hair and gray skin and gray clothes, and he always explained even the simplest concept about five times more than he needed to.

“Gravity,” he’d say, each syllable coming out slowly and distinctly. “Do you all remember what gravity is? It’s a vital idea to grasp. It’s important. You have to know about it. It holds us on the ground. It keeps us in place. It prevents us from flying off into the atmosphere. It . . .”

Jonah could never force himself to listen to more than
two or three seconds of Mr. Stanley’s explanations at a time. He spent most of science class staring at the clock on the wall.

It didn’t help that science was his last class before lunch.

On this particular day—a Tuesday—Jonah was peering at the clock’s red digital numerals with even more desperation than usual.

Jonah shook his head in despair, shifting his gaze just enough that he caught a glimpse of Mr. Stanley.

His mouth was open, stopped mid-word. He had his right arm lifted toward the board, hovering motionlessly over an unfinished line: “Forces in natu—” The floppy sleeve of his ratty-looking cardigan had frozen mid-flap on his unmoving arm.

But what looked the weirdest was that Mr. Stanley must have just dropped his dry-erase marker, and it
wasn’t
plummeting toward the floor. It, too, was frozen—in midair, about two feet below Mr. Stanley’s wrinkled hand, about two feet above the scuffed linoleum floor.

Jonah automatically glanced around, waiting for some
other kid to call out, “Whoa, Mr. Stanley! How’d you do that? What’s the trick? What were you just saying about gravity?”

Everybody else must have stopped watching and listening to him too,
Jonah thought.

Then he saw what the other kids were doing. Or—what they weren’t doing.

They were all frozen too.

Dylan Anderson was stuck mid-yawn, his jaw locked open. Blossom Gomez, one of the prettiest girls in the school, must have been stricken in the middle of tossing her hair over her shoulder, because she had a cloud of long strands frozen above and around one side of her head. CC Vorlov, the texting queen of Harris Middle School, had her thumbs frozen over her cell phone, hidden under her desk.

Jonah had never seen CC’s thumbs
not
moving. Her stopping texting was every bit as strange as the gravity-defying marker at the front of the room.

Experimentally, Jonah lifted his arm from his desk, then put it back down.

He
could still move.
He
wasn’t frozen like everyone else.

In the past couple of weeks Jonah had gotten used to weird things happening with time. He’d learned that
his seemingly ordinary life was a sham: He was actually a famous missing child of history, stolen by kidnappers intent on carrying him off to be adopted in the future. When time agents had tried to stop this crime, the kidnappers had crash-landed, leaving Jonah and thirty-five other babies to grow up out of place, in the late twentieth and early twenty-first centuries. Over the past few weeks Jonah and his younger sister, Katherine, had traveled back to the fifteenth, sixteenth, and seventeenth centuries to help restore time and rescue missing kids.

Their plans had gotten messed up again and again, and they’d been on the verge of disaster more than once. But with the help of a time agent named JB, they’d always mostly managed to work things out.

Nobody answered. Nothing moved. Jonah noticed that outside the window, even the flag on the flagpole had frozen mid-flutter.

“I mean it, JB,” Jonah said, trying to sound stern. This was hard, since Jonah was thirteen, and he could never be quite sure anymore if his voice was going to come out sounding bass or—and this was really embarrassing—soprano. This time his voice was pretty much in an alto range, which wasn’t much better. He cleared his throat.

“I thought you were done messing around with time
for a while,” Jonah tried again, almost growling.

Jonah’s stomach churned, but now it wasn’t because of hunger. Things had gotten very dicey on Jonah and Katherine’s last trip through time, to the sixteen hundreds. A former employee of JB’s who called himself Second Chance had forced time to split. After that, JB had told Jonah that it was too dangerous to schedule any more trips to the past for a while.

But the twenty-first century was supposed to stay safe,
Jonah thought.
Wasn’t it?

Jonah tried not to think about what he’d overheard JB saying the last time they’d talked. Jonah had been on his way to play soccer, and JB had called out,
Have fun
. Then, when he thought Jonah was out of earshot, JB had muttered,
While you still can.

Jonah’s stomach moved past “churn” to “extreme spin cycle.” He decided he might need to stay as motionless as the rest of the class just to keep from vomiting.

For a split second Jonah considered being a truly cruel older brother and pretending that he really was unable to move. A month ago he would have counted that as a great prank.

But a month ago he’d thought he was just an ordinary (if slightly goofy) kid. He’d never had to save anyone’s life. He’d never known that all of time could depend on his actions.

He turned to face Katherine and the door.

“No, I’m not frozen,” he said. Amazingly, his voice neither trembled nor squeaked. “I was just sitting here . . . thinking. Trying to figure out what’s going on.”

A month ago Katherine probably would have taken that as a cue to tease him with a jibe like,
You? Think? No way! Not possible!

Now she just tucked a strand of her blond hair behind one ear and said, “Okay. What’d you come up with?”

Katherine was not quite twelve. She still thought it was cool to wear T-shirts with words like
AWESOME
outlined in glitter on the front. She was a sixth grader—barely a step up from being a baby herself. Where did she get off, sounding so calm?

“Right,” Katherine said, in a tone that was every bit as insulting as if she really had said,
You? Think? No way!
She tapped her fingers against the door. “I don’t think JB did this.”

Jonah wondered if he should admit that he’d already
tried calling out to JB. But Katherine was still talking.

“I yelled for him as soon as this happened, and he didn’t answer,” Katherine said.

Jonah tried not to think about who might have stopped time if it wasn’t JB. The possibilities jumped into his mind anyway: Second? The original kidnappers, Gary and Hodge? Some other enemy they didn’t even know about yet.

Jonah was almost glad that Katherine was still blathering on. It was almost enough to distract him.

“So then I decided that, instead of trying to figure out why time stopped, I should figure out why
I
could still move,” she said. “I thought maybe it was because I’d traveled through time before, so other time travelers would be immune too. So I went to the office and looked up which class you were in, to find you.”

Sheesh,
Jonah thought.
If Katherine had time to walk from the sixth-grade wing to the office to the seventh-grade wing . . . just how long did
I spend staring at the clock still thinking everything was normal?

Automatically, he glanced at the clock once more. But of course it was still frozen at 11:43.

“You came looking for me first? Before Chip?” Jonah asked, a mocking twist to his words.

Chip was Jonah’s friend and Katherine’s boyfriend.
He was also another missing child from history. But unlike Jonah, Chip had already resolved his past. Jonah and Katherine had helped to rescue him—and another boy, Alex—on their first trip through time.

Now Katherine was biting her lip.

“
Was
he sick?” Jonah asked. “Or—” Chip’s original identity had been that of a medieval English king. Chip had spent two years in that role. He was having a few problems readapting to life as a normal American teen.

He reached over to the space beneath CC Vorlov’s desk and wrenched the cell phone from her grasp. A half-written text message glowed from the screen:

Jonah began punching keys, but nothing on the screen changed. He tossed the phone down on CC’s desk in disgust.