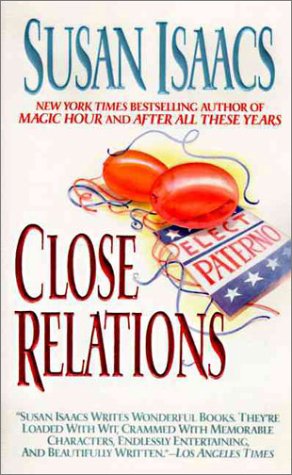 To My Parents,
Helen and Morton Isaacs,
With Love.

Author’s Note: How I Came to Close Relations

M
y family hated my job. Aunt Estelle had said, “Darling, politics is so unlike you. All those loudmouths and lower-class lawyers. They’re beneath you. I know deep down you realize it.”

“Roosevelt was a politician. So was Kennedy—Harriman.”

“Marcia, sweetheart, they were statesmen. We’re talking New York City now, and you know as well as I do that no one you come in contact with is interested in real elegance.”

As usual, my mother had let a refined sigh escape through the delicate hole in her pursed lips and then had noted that I seemed to spend a lot of time catering to people in slums.

Uncle Julius had muttered that politicians wouldn’t know a nice girl if they fell over her.

Cousin Barbara was thrilled that I was fulfilled but hinted I might combine my career with marriage and children for even deeper fulfillment.

It was a situation from which half-hour television comedies are made.
“Marcia!
In tonight’s episode, Marcia Green’s warm and winning and wise and wonderful Jewish family reminds her that she is thirty-five, divorced, and childless.”

It would have been a veritable laff riot except that it was my life they were criticizing. They belittled every choice I had made by myself.

That job. Who does she think she is, Miss Last Hurrah, chasing around with all those Democrats, getting older and older and her uterus shriveling to the size of a walnut so she can be guaranteed not to have a family and live a normal life? And her apartment, up four flights of stairs like she was an immigrant, in the middle of Greenwich Village, with weirdos and women who don’t shave under their arms for neighbors.

And him. Can you believe what she’s involved with? There would be howls of laughter on the sound track as they schemed to drag still another eligible man across my life, trying to pry me away from
him.
Can you believe her, divorcing a very fine third-year medical student, running around Manhattan like she was a wild Indian, and then winding up living with an Irishman from the Bronx old enough to be a lot older than she is? We’ll find her a real boyfriend. The camera would pan to a smiling Aunt Estelle. Before the commercial, there would be an ethnic joke about beer cans and perhaps a line or two about bloodshot eyes.

Ha! Such a life our girl Marcia is living.

Jerry Morrissey’s eyes were not bloodshot. They were clear, framed with a heavy fringe of dark lashes. And while he sipped an occasional beer, he was quite elegant. Late on that morning when everything began happening, a lock of his thick black hair fell over his forehead and it looked tasteful and quite wonderful, as if styled by a Hollywood hairdresser for a fast take of vulnerable dishevelment. He brushed it away gracefully.

He spoke nicely too. “Listen, if you’re hungry, you can grab a hot dog at the stand over there. The governor probably won’t be here for another fifteen minutes.”

“I’ll wait till after the rally.” I remained close to Jerry. “Anyway, I saw those hot dogs and they’re really an unhealthy-looking pink. They look like they’d bite back.”

Across from us, a handbill stuck under the windshield wiper of a parked car flapped in an unusually gentle winter wind. I couldn’t read it, but I could guess what it said: T
HE
B
OROUGH OF
Q
UEENS
S
ALUTES
G
OVERNOR
G
RESHAM!
There would be fifteen sentences about the rally, fourteen followed by exclamation points.

“Morrissey! Marcia!” William Paterno, President of the Council of the City of New York, climbed from the leather softness of his official car and hurried toward us. His legs were short and his feet small, but he moved fast, doing two steps for a longer-limbed man’s one. “Gresham’s motorcade just went through Long Island City. He should be here in ten-fifteen minutes.” Paterno’s expression was sour. “Crazy,” he went on, “the governor calling a rally outdoors in the middle of February, just to say hello to people. You’ll see, five thousand people will come, a third catch cold and blame it on him and vote Republican next November. Gresham’s nuts.”

Jerry offered him a diplomatic shrug. I offered the truth: “They love him. Did you see the crowd? It’s huge.” Jerry glanced away while Paterno glanced at me, dyspeptic. Then I added, “He’s unbeatable.”

If James d’Avonne Gresham had only listened to his nanny’s lectures on table manners, he would still be governor of New York. Small bites, James. Chew thoroughly. Slowly. We’re in no hurry. But he was, after all, a politician, so someplace between his first meeting of the New York County Independent Democrats—where he quickly made his mark as the only person in the room not shrieking—and his first race for State Assembly, James d’A. Gresham began tear-assing around. His nanny would have deemed it highly unseemly. Members of the leisure class do not dash from a Fifth Avenue penthouse to inappropriate parts of Brooklyn to lunch with Negroes. Nor do they seek the counsel of Jews who have not yet learned to lower their voices. Rather, they sit in law firms and banks and nod to each other. They remain calm. And despite the occasional deviant, the aberrant Roosevelt, they do not become Democrats.

I could be nothing but a Democrat, although my mother attempted to instill good breeding in me post partum: “Marcia, a lady dips her soup spoon
away
from her.” While Governor Gresham’s grandfather began crewing at Princeton, mine spent twenty dollars to change his name from Isadore Greenbaum to I.S. Green. Alas, by the time Grandpa Gresham entered Harvard Law School, Grandpa Green had been rolling hems on ladies’ better coats for three years; two years later, he moved up to finishing collars, and that was as high as he got.

But this was America, so things got better. In the next generation, when Gresham’s father took up the oars for Princeton, my father, the optimistically named Victor Green, was in his third year of night school at Brooklyn College. Papa Gresham became an investment banker, Papa Green an accountant. However, the Greens lacked the Greshams’ intuitive grasp of the spirit of capitalism. So while d’Avonne Gresham moved on to become Secretary of Commerce, my father remained an employee of Nathan L. Fingerhut, C.P.A., until his death. But as my aunt told my newly widowed mother, “You can always hold your head up. You were married to a professional.”

The sirens from Gresham’s motorcade grew from a nearly subliminal hum into a shrill scream. I groped through my handbag for my pen and pad. Paterno would be up on the platform with Gresham, and he liked me, his speech writer, to take notes. If, unconsciously, he scratched his nose or blinked too much or allowed his mouth to hang open, he wanted to know about it so he could control it the next time. He recognized that appearing with a relaxed and Protestant Gresham made him especially uneasy.

I found it exciting. I was the last Green, the only member of the third generation, but much closer to the Greshams. Both the governor and I earned our living in the same way—from New York Democratic politics. That he supplemented his salary with a twenty-five-million-dollar trust is not the point.

In fact, Gresham is not the point either. His soon-to-be-famous Rego Park rally is simply a convenient place to begin. And he provides a nice contrast to everyone else in my life. James d’A. was profoundly Episcopalian, his pure
WASP
-hood muddied only by a tinge of Huguenot blood.

The rest of us were real New Yorkers: ethnics, minorities. Our roots were mainly in the working class. Paterno’s father had been a gravedigger. Jerry’s had been a cop. Although we never got to Princeton because the subway didn’t go to New Jersey, we got to college, we got away from our old neighborhoods, we got to run the city that aristocrats like Gresham conceded was the most exciting in the world.

We were assimilating into the Great Washed, the rest of the country. We were moving up. Of course, Gresham remained tantalizingly remote. We minded our manners; he scratched his crotch at the April in Paris Ball and forgot to write thank-you notes.

But Gresham wasn’t too remote. He loved New York City and we loved him back, joining with the rest of the state to put him in the governor’s mansion. Governor Gresham alliterated well, looked well, and performed magnificently.

Jerry called, “Marcia, over here.” He had returned from escorting Paterno up to the flatbed truck that would serve as a stage during the rally. Normally, he did not follow Paterno about. He was Paterno’s most important aide, his Chief of Administration, and as such remained at City Hall and performed important chiefly duties. But a rally for the governor required special attention.

“Is Bill nervous?” I asked.

“El Wrecko,” Jerry answered. Paterno had been hoping this was the day he could pull the governor aside and search him for clues as to whether Gresham planned to drop his present lieutenant governor and select someone worthier—like Paterno. “He keeps complaining that his mouth is too dry so he gives a fast spray with that blue mouthwash he carries and his mouth smells like a disinfected bathroom. And he’s cranky. Edgy as hell.”

So were we. Jerry’s career and mine were tied to Paterno’s. His success became ours. Our prestige and power derived from his. In that sense, Jerry and I were like children—or serfs.

“I mean, how’s your back?” Jerry had exited from the official car at a bad angle.

“Just a pull.” His back was fragile. He had a wooden board under his side of the mattress. “You’ll give me a nice soft massage tonight.”

“I promised to have dinner …”

“But I’ll call my Aunt Estelle and—”

“No, go ahead. I’ll get into bed with the heating pad. It’s a good opportunity to catch up with some paperwork.”

“No, you haven’t seen them for a while. Anyway, whenever you get back from a family dinner you’re so happy to see me that I can get you to do whatever I want.”

“What do you want?” I whispered, waiting for him to whisper back something hot and sexual, or something tender and long-range.

“What?” he demanded loudly, as though I had interrupted a conversation he was having with someone else. He looked annoyed. “Come on. No funny stuff during working hours. I thought we agreed on that.”

Embarrassed, afraid he knew how I wanted my own question answered, I glanced away, but he threw me a fast wink before I could completely avert my eyes. Jerry gave gifts and then snatched them away and handed back different ones. His presents were more than enough to keep me with him, yet he never bestowed so much that I might be tempted to cut all my other ties and irritate him with my demands for more winks, more sex, more companionship. “Sorry,” I murmured. He reached out to me and traced my lips with his index and middle finger: a consolation prize to keep me happy for the next twenty-four hours, so I would not surrender under the combined Green/Lindenbaum barrage of guilt and hope at dinner and consent to meet the latest anesthesiologist or raincoat manufacturer.

Traitorous Heart: #7 (The Traitorous Heart Series) by Wilde, Breena
Ask Me by Laura Strickland
On Borrowed Time by Jenn McKinlay
Diary of a Player by Brad Paisley
Ink Me by Anna J. Evans
Mr Sampath-The Printer of Malgudi, the Financial Expert, Waiting for the Mahatma by R. K. Narayan
Franklin by Davidson Butler
Deadly Contact by Lara Lacombe
The Tapestry in the Attic by Mary O'Donnell
All the Good Parts by Loretta Nyhan