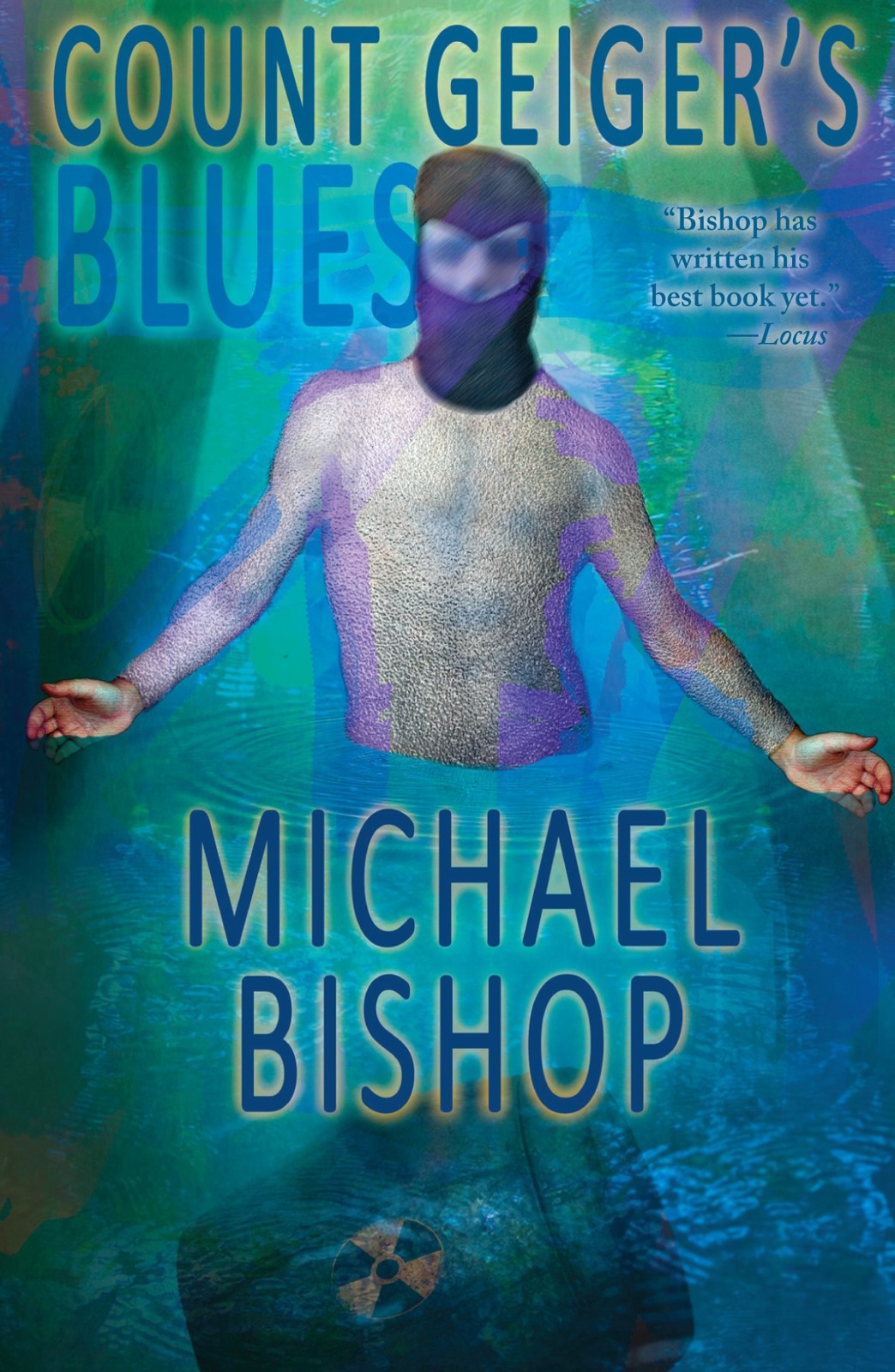 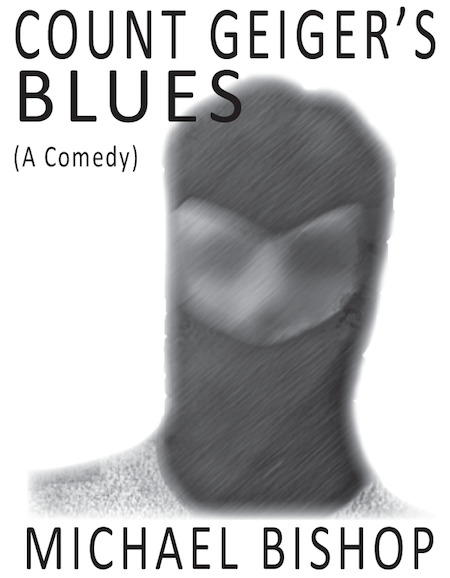 Count Geiger’s Blues follows the adventures of Xavier Thaxton, arts editor at a major Southern daily called the Salonika
Urbanite
. Thaxton thinks himself a superior man. His aesthetic standards are so lofty that he regards superheroes as pop-culture cock-and-bull, rock music as audible rubbish, and soap operas as the contemptible spew of script-writing committees.

While skinny-dipping in a pool polluted with radioactive waste, Thaxton is afflicted with superpowers all his own and becomes that which he most scorns. A radiation-induced ailment, the Philistine Syndrome, forces him to assume the persona of comic-book hero Count Geiger to allay its career- and indeed life-threatening symptoms.

Michael Bishop’s
Count Geiger Blues
, a novel of intellectual heft and self-spoofing kitsch, is a take on superheroes like no other: a rollicking foray into high and low culture that mines the vicissitudes and tragedies of everyday life for serious belly laughs and bona fide heartbreak.

“Michael Bishop is a master at weaving various threads into a seamless fictional whole. Here this eloquent American writer brings his considerable gifts to the myth of the superhero. Any novel by Bishop is well worth reading—and discovering, if you are unfortunate enough to be unfamiliar with his work—and
Count Geiger’s Blues
is no exception.”

“
Count Geiger’s Blues
is a groundbreaking novel, one of the first to use superheroes for literary purposes beyond mere adventure, and it influenced me deeply. It’s a satire of a pompous man whose body rebels against high culture and craves the ‘low’—in other words, a stand-in for every snob who doesn’t understand what the tropes of genre can be made to do in the hands of a master writer like Bishop. It’s smart, observant, and hilarious, fueled by outrage at what humans will carelessly do to each other. But in the end, Bishop’s innate humanity takes the story beyond satire, for there are scenes in the book that have haunted me for years.”

“Set in the metropolis of Salonika in an alternate-world New South,
Count Geiger’s Blues
offers a variety of deft phildickian satire and the sweet humanism of classic Bishop.”

“
Count Geiger’s Blues
is an entertaining satire about the ongoing battle between High and Low Culture, which is essentially the prime offensive in the Great Postmodernist War. Beautifully written, witty, poignant and sharp in its insights, by turns baleful, ironic, moving, absurdist, realistic, joyous, camp, serious, goofy, and alarming, it demonstrates that science fiction can be richer—more aware, more authentic—than other kinds of writing; and it proves beyond both reasonable and unreasonable doubt that Bishop, together with Christopher Priest, is the finest exponent of this grander vision. This book is a blessing, but a Bishop’s blessing carries even more weight than a Priest’s.”

“Comic books may never be the same. Michael Bishop ranges over the whole exuberant, tacky, imaginative, pathetic province of popular culture, mining subtle layers of meaning. If you thought superheroes with ‘powers’ were only for wishful adolescents, think again. In this deft, funny, and profound novel, Bishop makes his unorthodox and reluctant hero the embodiment of more crazy social forces than a dozen lesser writers could pack into a dozen lesser books. A true
tour de force
.”

“The most ambitious comic books are no longer merely comic—may even incorporate tragedy in a critique of modern life as savage and acute, in [their] way, as the ferocious satire of Dante’s
Inferno
.
Count Geiger’s Blues
also goes beyond humor—well beyond, in its remarkable closing chapters. But they build on all that has gone before. In unleashing a startling talent for comedy and a wide-ranging knowledge of pop culture in both its absurdity and splendor, Michael Bishop has written his best book yet.”

“The astonishing thing about
Count Geiger’s Blues
is the way that, beyond its zany premise and calculated hyperbole, the novel deals substantively with matters ranging from Nietzsche’s
Übermensch
to radioactive waste disposal to the tension between high and low art. Michael Bishop has achieved what most postmodernists can merely talk about: the creation of a superhero who is first of all a believable human being.”

Who Made Stevie Crye?

an imprint of Fairwood Press

this experiment in literary synergism

Count Geiger’s Blues
, published in 1992,
falls at an interesting place in Michael Bishop’s career. Bishop has said that he started work on this novel in the mid-1980s while struggling with writing
Unicorn Mountain
, a difficult book about, among other things, the AIDS epidemic. As a relief from that unrestrained darkness, he decided to write a comedy.
Count Geiger’s Blues
grew from that decision.

Bishop’s career as of the mid-1980s was as one of the writers who had come into science fiction availing themselves of the liberties and literary possibilities opened up by the New Wave of the 1960s. In the early 1970s I was reading and trying to write SF, and I associated Bishop with a generation of writers a few years older than I who arrived in the late 1960s and early 1970s, writers such as Gardner Dozois, George Alec Effinger, Jack Dann, Elizabeth A. Lynn, Vonda McIntyre, Ed Bryant, George R. R. Martin, and Joe Haldeman. How I envied them, how I wanted to be one of them! They were literarily ambitious but also grounded in the traditions of magazine SF that had been established over the previous forty years. By the early eighties, Michael Bishop had emerged as one of the leading voices of that generation. In 1981, his story “The Quickening” won the Nebula Award for best novelette, and a year later his novel
No Enemy But Time
won him his second Nebula.

Though a dark irony often accompanied his best work (and as early as “Rogue Tomato”—the story of a man who wakes up one morning transformed into a planet-sized tomato—he had essayed the Kafkaesque), readers who had encountered Bishop’s work before
Count Geiger’s Blues
might be excused if they did not anticipate comedy, or costumed superheroes. But in the mid-1980s, comic books experienced a revitalization, reflecting contemporary anxieties and critiquing the superhero concept in work such as Frank Miller’s groundbreaking
Daredevil
and his later reimagining of Batman in
The Dark Knight Returns
, and in Alan Moore and Dave Gibbons’s
Watchmen
. Bishop has said that his son Jamie introduced him to
Daredevil
and that the two of them followed
Watchmen
issue by issue as the series came out.

Count Geiger’s Blues
begins as a comic meditation on pop vs. high culture. Xavier Thaxton, a Nietzsche-loving culture critic for a newspaper in a great southern metropolis, is accidentally exposed to radioactive waste that eventually turns him into the comic-book hero Count Geiger. The premise sounds like a joke: What would a highbrow art snob do if, as a result of exposure to radioactivity, he found that any contact with high art made him deathly ill, and that the only cure was for him to wear a ludicrous superhero costume?

And at the beginning Bishop gets into the fun, adopting a high rhetorical, almost archaic style, with digressions on fashion design, rock music, the modern comic book, backwoods dramatic festivals, radioactive-waste-hauling bubbas. Add superpowers. Stir in an action plot, quirky minor characters, kinky sex, sideswipes at the NRA, and strippers attacked with squirt guns full of beer. Even at the height of the fun, though, Bishop can’t help but think about the serious side of these games (as when Xavier notices that the strippers being drenched in beer are not having fun). As the story progresses, it turns increasingly serious, and (spoilers ahead!) as Xavier rises from more or less normal human, through superman, only to fall precipitously back to mortality, this comedy approaches tragedy.

In places, perhaps the disparate elements of
CGB
make for an ungainly narrative, like a bus ride with a symphony orchestra, Spider-man, a philosophy professor, and the Talking Heads, all the way from Disney World to the MOMA via backwoods Georgia. Yet the novel looks forward to what I regard as Bishop’s masterpiece,
Brittle Innings
, another story with a premise that sounds like comedy: Suppose Frankenstein’s immortal monster ended up playing first base for a minor-league baseball team during World War II? Both novels contain the Southern milieu, the sometimes comic characters, the larger-than-life “superhero” set in an all too real historical moment, the dark subtext, and fundamental tragedy.

When I first read this book, it struck me that Xavier’s situation could be seen as a metaphor for that of a literarily ambitious SF writer—the high culture aspirant wearing a foolish superhero costume under his street clothes. For Bishop aspired to the highest levels of art, working in a genre considered by the Xavier Thaxtons of the
New York Times Book Review
—at least at that time (matters have changed somewhat in the ensuing twenty years)—as, at best, one small step above comic books. Xavier even compares wearing the Geiger costume under his street clothes to the holy undergarments Mormons wear in service of their faith. Image becomes metaphor: We sf writers wear the evidence of our difference hidden from the mundane world, to protect us from illness and to enable us to do our work without anyone’s apprehending our secret faith.

Or maybe, as Xavier suggests, it’s just a body-sized prophylactic.

For me, the book finds its greatest emotional power in those moments, such as the fate of Larry Glenn Wilkins, his wife Missy, and their little daughter Carrie-Lisbeth after the “Blue Fairy Dust” birthday party, where the gulf between the absurdity of cause and the horror of effect reminds us of the tragedy of our everyday lives. Lest you think that this is just science fiction, it’s clear that Bishop borrowed most of the details of this incident from events that occurred in Goiânia, Brazil, in 1987, when a radiotherapy device taken from an abandoned hospital was dismantled by local residents, leading to several cases of fatal radioactive contamination. This historical allusion only adds to the poignancy: In comics you get bitten by a radioactive spider and acquire superpowers, but in the real world you die in weeks.

Here is where the novel comes together for me.
Count Geiger’s Blues
suggests to us that the fascination of comic books with larger-than-life superheroes, rather than a weakness, is a tragic commentary on the real world, a world that unhappily does not have superheroes—and even if it did, one beset with problems that even Superman could not solve. As Xavier tells his nephew Mikhail about halfway through the novel, “Sometimes, even our most beloved stalwarts fail us. This is known as Real Life. People who face up to it and go on anyway are called adults.”

I don’t know how we do it sometimes. Life can be so painful; it’s hard to be an adult. I guess that laughing helps.

John Kessel is the author of the novels
Good News from Outer Space
,
Corrupting Dr. Nice
, and, with James Patrick Kelly,
Freedom Beach
, as well as of the story collections
Meeting in Infinity
,
The Pure Product
, and
The Baum Plan for Financial Independence and Other Stories
. With Kelly, he has edited six anthologies re-visioning latter-day short speculative fiction, most recently
Kafkaesque
(2011) and
Digital Rapture: The Singularity Anthology
(2012). His fiction has won the Nebula Award (twice), the Theodore Sturgeon Memorial Award, the James Tiptree Jr. Award for fiction dealing with gender issues, and the Shirley Jackson Award. Kessel has taught American literature and fiction writing at North Carolina State University in Raleigh, North Carolina, since 1982.