Read Cowboy of Her Heart Online

Cowboy of Her Heart 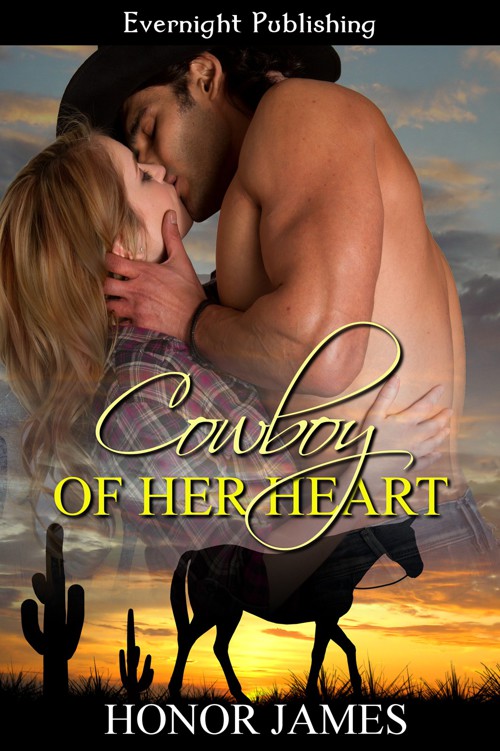 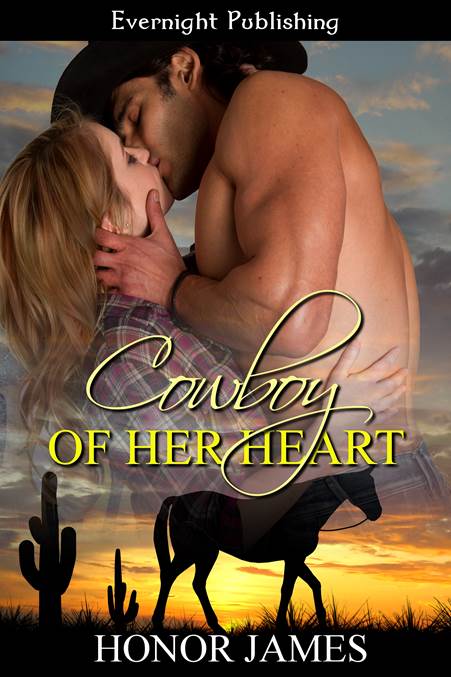 WARNING: The unauthorized reproduction or distribution of this
copyrighted work is illegal.

No part of
this book may be used or reproduced electronically or in print without written
permission, except in the case of brief quotations embodied in reviews.

This is a work of fiction. All names, characters, and places are
fictitious. Any resemblance to actual events, locales, organizations, or
persons, living or dead, is entirely coincidental.

I would like to dedicate this book to my fans. Each and every single one
of you that have talked to me in the wee hours of the night, the ones that have
taken time out of their day's to send me messages and chat with me. You all
mean far more to me than you can possibly know.

I also would like to dedicate this book to Stacey with
Evernight
Publishing. Thank you for taking a chance with me
and helping me make this love story come to life.

COWBOY OF HER HEART

Cowboy for the
Holidays, 1

A day everyone in the world
celebrated with candy hearts with idiotic sayings, chocolates that were too
sickly sweet, and roses of every color in the rainbow.

No one was original anymore. No one put any
damn thought into the day, the celebration of loving someone, or showing those
people just how much they were appreciated.

No, too many just saw it as an opportunity to
smooth talk, wine and dine, and basically earn Brownie points for the
year.

Disgusting and exactly what was
wrong with society today.

Shaking his head at the crap that Herman,
local handyman and owner of the best damned hardware store in the county, was
putting in his front window.

Paper roses and a sticker
of a box of chocolates that claimed
4 All
Time XOXO.

The holiday, like too many of them, had become
commercialized.

The big corporations saw
it as yet another opportunity to part idiots from their money and sell them an
ideal that was pure crap.

The worst part
was that people fell for the slick advertisements and promos of stuff to
purchase to
show her you care
.

If he were ever suckered into a long-term
relationship with a woman, there was no fucking way he’d be sucked into that
Bermuda Triangle of lies and deceptions.

Birthdays and Christmas were really the only reason to give presents and
go above and beyond for the one you cared about.

Any other holiday, as promoted by corporate
America, was bogus and useless.

Not saying he wouldn’t show this woman,
fictional though she currently was, how he felt.

But he’d do it every day of their life
together.

She would know he appreciated
her and cared for her every single day.

The idea that one day out of all others was more important because of some
dead Saint that got his own holiday was just plain idiotic.

Not that he dared to say anything to Herman
about it.

Herman was what he and many of
the other local ranchers called a romantic.

The man was crazy in love with his wife, which was truly sweet in a
slightly gut-turning way, and did special little things for her all the
time.

But, apparently, he went way above
and beyond every Valentine’s Day.

According to the story, the two had met on a
Valentine’s Day many, many years ago.

No
one actually asked how many because he’d just give you this glare that made you
feel you were about two seconds from becoming another spot of something on his
worn, boot-scuffed floor.

They’d argued,
hated each other on sight and then ended up running into one another over and
over again every day for a month.

Both had thought the other was stalking
them.

But in the end, they’d gotten
stuck inside a broom closet with a swollen doorframe and, when they’d come out,
they’d been civil to one another.

They’d
begun to date, and then they fell in love, got married and had six
children.

So, to celebrate their first Valentine’s Day,
when fate had first thrown them together, they always went back to the same
place they first met: Munich, Germany, of all places.

They ate, drank and did other things he tried
not to consider.

It was a little too
close to imagining what your parents did behind closed doors or when you
weren’t home.

“Sorry about that, Grant, but since I’m out of
here in two days I just had to get them up.”

Shaking his head, he offered what he hoped was
an understanding smile and shrug.

“It’s
all right. I know you and the missus have plans to head off for your annual
trip.

I have to be in town for a meeting with my
accountant later anyway.

He’s got
something coming up in April so he wants all my tax stuff super early so he can
get it and all the others he does done well ahead of time,” he explained at the
older man’s questioning look.

“Now that you mention it, I remember Jonathan
saying something to that effect.” Jonathan was one of Herman’s three sons, the
other three obviously daughters.

The man
was also one of Grant’s neighbors and a fellow rancher.

“He’s entering two of his classic cars into a
car show in Vegas,” Grant said.

“Thinks
he might actually have a shot this year, given his biggest probable competition
will be home with his wife while she gives birth.”

“He’d better hope it’s the first born then;
odds are more in his favor that way.

Second or third tend to show up a bit earlier than planned.

Not always, of course, but the odds are
definitely there,” Herman said with a chuckle.

“Ah, here it is.” Turning back to the counter, he slid the box of tools
across it.

Looking in, Grant picked up a couple and
nodded.

“These are great, Herman,
practically as good as new,” he said with a grin.

“Throw it on my tab and I’ll catch you when
you get back from your trip?”

He made it
a question, since he didn’t know if that would be all right by the older
gentleman.

You’re all caught up anyway,
well, except for the sharpening.” Herman laughed.

“Catch me whenever you’re around next and the
shop’s open.

I know you’re good for it.”

Picking up the box, he tucked it carefully
under his arm.

Tipping his Stetson, he
thanked him, wished him well on his vacation again, and actually managed not to
flinch when Herman wished him a happy Valentine’s Day.

Shuddering once he knew he was out of view of
the shop, Grant shook his head.

“Valentine’s Day, what a crock,” he muttered.

Digging in his pocket, he made his way to his
truck.

He still had about an hour before
he was meeting with Darrell, his accountant, so he’d grab a cup of coffee after
he tucked the newly sharpened tools away.

Looking up, he stalled in his tracks and did a
double-take.

Stunned, he stared at the
very large gouge and dent in his driver side rear paneling.

“Mother of God,” he whispered, with a definite
hint of a whimper in there for his baby.

Dropping the box of tools in the back of the
truck, he touched the paneling and really whimpered.

“Oh, Lord, who the hell did this to you,
Matilda?” Looking over the rest of the truck, he spotted the note.

Well, at least the asshole
who
couldn’t drive had the decency to leave a note.

Grant hoped he’d left his name, insurance information and a phone number
so Grant could track him down and tear him a new one.

Pulling it free of the windshield wiper he
flipped it open and cursed.

Crushing it
in his hand, he looked up the street to the quaint little boutique the culprit
owned.

Pushing his cowboy hat more firmly onto his
head, he stormed up the street.

He
didn’t care if she was the town’s darling, he was going to charbroil her sweet
little ass for what she’d done to Matilda.

American Criminal by Shawn William Davis
LUCA (You Will Be Mine) (The Sicilian Mafia Series Book 1) by Roberts, Jaimie
To All the Boys I've Loved Before by Jenny Han
HER ONE AND ONLY VALENTINE - by TRISH WYLIE
Hairy Hezekiah by Dick King-Smith
Forced To Breed With The Dungeon Beasts (Monster Breeding) by A.J. Hamilton
Charlene Sands by Bodines Bounty
Breaking Up Is Hard to Do (The Sam McCain Mysteries Book 6) by Gorman, Ed
War Children by Gerard Whelan
The Hours of the Virgin by Loren D. Estleman