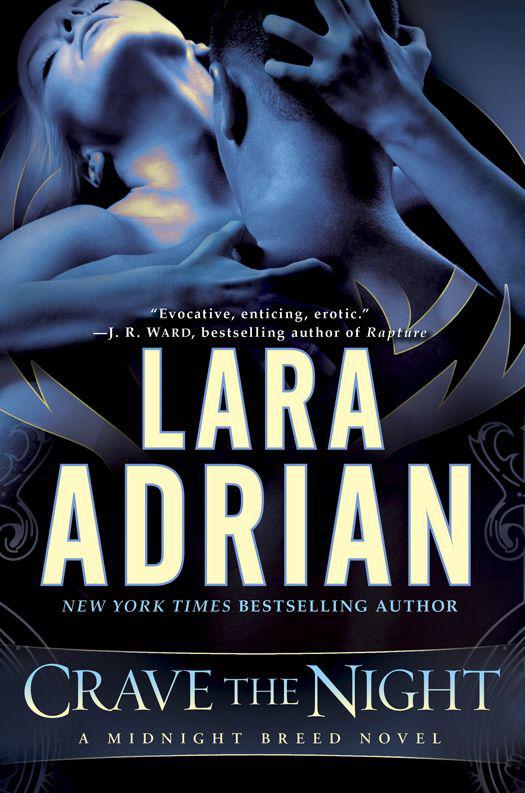 Crave the Night
is a work of fiction. Names, characters, places, and incidents are the products of the author’s imagination or are used fictitiously. Any resemblance to actual events, locales, or persons, living or dead, is entirely coincidental.

THE UNDULATING CROWD PACKED ONTO THE DANCE FLOOR INSIDE the throbbing Boston nightclub seemed to collectively sense that death had entered the building.

Nathan took only the barest notice of the sudden change in atmosphere. As one of the Breed, he’d long grown used to the reaction he had on humans.

As a warrior member of the Order and a first-generation Breed male—the most powerful of his kind—Nathan’s presence often put even other vampires on alert.

But it was the other part of his nature, the fact that he was born and raised a Hunter, one of a dark legion bred for killing and stripped of all emotion or attachment, which broadcast an unspoken, visceral terror into the room. He saw it in every pair of eyes that furtively glanced his way now through the swirling dance lights in the darkened club.

“They don’t look happy to see us,” quipped Rafe, one of three other Breed warriors who reported to Nathan as their squad captain.

“I doubt Cassian Gray will welcome the Order with open arms either.” This from Nathan’s lieutenant, Elijah, in the slow, laid-back Texas drawl that belied the vampire’s quick skill with any one of the blades or firearms bristling from his weapons belt.

From the other side of Eli, Jax, the third member of tonight’s patrol, quirked a slender black eyebrow over his almond-shaped eyes. “It’s not like we left on the best of terms last time.”

No, they hadn’t. The last time Nathan and his crew had stepped inside
the former church that was now one of the city’s most popular—and least reputable—hot spots, it ended with the club’s proprietor, Cassian Gray, calling in an armed unit of the Joint Urban Security Taskforce Initiative Squad. The Order didn’t have time to deal with any public or political fallout from JUSTIS tonight.

And if Cass thought he could hide behind the palms he’d greased so well within that combined Breed and human police organization, he was wrong. Dead wrong, if that’s the way he wanted to play it.

The Order had recently come across intel indicating Cass might have other, unknown allies in his pocket. Allies who would make his law enforcement and criminal underworld connections seem like worthless puppets.

Tonight, Nathan and his squad had been tasked with bringing the mysterious club owner in to the Order’s Boston command center for questioning.

“Come on. Let’s go find the bastard.” Ignoring the sharp spike of adrenaline and anxious perspiration injected into the general mélange of stale liquor, smoke, and perfume that hung like a fog in the club, Nathan gestured for his team to follow him deeper inside. “Eli, you and Jax search the public rooms. Rafe and I will take the offices in back.”

With the two warriors heading off on his instructions, Rafe fell in alongside Nathan to cut a path through the crowds on their way to La Notte’s owner’s quarters. There was no security to stop them once they reached Cass’s office, suggesting the man was either working the floor of his club as he so enjoyed or not in the building at all.

Nathan hoped it was the former. If not, this unannounced visit was sure to get back to Cass one way or another, and the Order didn’t want to give the son of a bitch any cause for alarm. They wanted nothing to send him to ground before they could interrogate him about who—or, rather,
what
—he truly was.

Nathan stalked up to the black-painted steel door with the word PRIVATE scratched into it from the tip of a serrated blade. The dead bolt and secondary lock were no trouble at all for the power of his Breed mind. Nathan freed the bolt and the other tumbled open with little more than a second’s concentration.

He pushed the door wide and Rafe followed him into the darkened office. Neither of them needed artificial light; Breed eyesight was flawless, all the more so in the dark.

Nathan made a quick visual scan of the empty room and cursed. “He’s already gone.”

No sign of Cassian Gray at all. The desk was cleared of all papers and personal effects. No computer tablet lying conveniently in the open for them to confiscate. Nothing but a carefully vacated office.

If Nathan had to guess, he figured Cass had been gone for several hours at least. Maybe a full day or more.

“Dammit,” he gritted through clenched teeth.

Rafe meanwhile had broken into a cabinet of paper files and ledgers on the other side of the room. “Just a bunch of accounting records and supply receipts in here. Bar equipment, liquor invoices, band contracts for the club.” The blond vampire shot Nathan a wry look. “Where do you suppose Cass keeps the books for the real moneymaking parts of this operation? Nothing in here at all that mentions the fight arena downstairs or the gambling, pimping, and blood trading. Nothing in here about the other pursuits La Notte caters to either.”

Nathan grunted. Cass’s illegal and other unconventional activities provided in the restricted-access lower level of his club were no secret, but criminal or not, he was careful to protect the interests of himself and his clientele. The records for those parts of his business were surely kept somewhere far more secure than his office at the club.

No, Cassian Gray was a man who knew when and how to keep his secrets.

Rafe had now abandoned the file cabinets to move farther into the gloomy office space. “Hey, check it out,” he called over his shoulder to Nathan. “There’s another door over here.”

The warrior opened it and blew out a whistle. “You gotta see this, man.”

Nathan walked over to find a bedroom on the other side of the door. A king-size four-poster bed draped in black satin sheets dominated the room. The rails between the posters dripped with leather straps and an assortment of manacles and buckled restraints, a few bearing sharp metal spikes.

Rafe barked out a laugh. “Whoever Cassian Gray is, he’s one twisted fuck.”

Nathan stared at the accoutrements of sexual deviance and torture while his friend and comrade stepped inside to jingle one of the studded harnesses. “Leave it alone, Rafe. We’re wasting time. Cass isn’t here, obviously. Let’s go find the others and get out of here.”

As Rafe dropped the leather strap and they prepared to leave, Jax rushed in to meet them. His face was drawn and grave. “We’ve got a problem.”

Jax shook his head. “Apparently, we just missed him, if you can believe any of the club staff. The problem is Aric Chase. He’s downstairs at the cages. With Rune.”

“Eli’s trying to break it up,” Jax said. “But Aric won’t stand down. Shit’s about to get ugly.”

Nathan growled a curse. “Is Carys here too?”

“Not tonight,” Rafe said. “She’s at the art museum with Jordana Gates. The two of them are hosting a patrons’ reception. They’ve been planning it for months.”

Nathan gave a tight nod, grateful for that small mercy. The last thing Carys Chase needed was to see her twin brother take a beating from the cage-fighting killer who’d recently begun sharing her bed.

If the Breed fighter and the daywalking female had shared anything else—namely a blood bond—Aric wouldn’t be the only member of the Chase family determined to kick Rune’s swarthy ass. Hell, Nathan would likely be willing to join that fight himself too.

He took off at a dead run, heading with Rafe and Jax for the cage arena in the lower level of La Notte. Shouts and roars and bloodthirsty applause thundered from the bowels of the former church.

And no sooner had he descended into the illegal sporting den than Nathan spotted Aric and Rune. They stood in front of the cages, Eli positioned in between them, mostly holding Aric back. Both Breed males were flashing fangs, eyes glowing bright amber in the dim light of the arena.

Nathan scowled at Jax. “What the fuck’s going on?”

“I’m not sure. It was already getting heated when Eli and I got down here.”

Another of La Notte’s fighters, a blond, long-haired Breed male named Syn, met Nathan’s hot glare from nearby as the din ratcheted up even higher among the spectators gathered in the arena. “Better rein in your baby warrior before Rune leaves him in bloodied shreds.”

Syn smirked. “Rune’s problem?” He shook his head. “Rune was minding
his own business, just taking a breather and enjoying some
refreshment
before tonight’s first match.”

The way Syn leaned on the word
refreshment
told Nathan that when Aric found him, Rune was likely feeding from one of the paid human blood Hosts employed by Cass to serve his fighters and VIP clientele.

“Your boy started talking shit,” Syn went on. “Started telling Rune the Order had its eye on him. That he’d better watch his step or he was gonna get ashed.”

Holy hell
. Nathan acknowledged that this confrontation probably shouldn’t surprise him, but Aric’s personal dislike of the brutal cage fighter had nothing to do with Order business.

Expecting: A Novel by Ann Lewis Hamilton
Philippa Gregory 3-Book Tudor Collection 1 by Philippa Gregory
The Old Dragon of the Mountain's Christmas (Dragon Lords of Valdier #9) by S.E. Smith
Lone Star Cinderella by Clopton, Debra
The Legend of Kareem by Jim Heskett
one hot summer by carolina garcia aguilera
Before You Know Kindness by Chris Bohjalian
Prima Donna by Karen Swan
Faces of the Gone: A Mystery by Brad Parks
Soulbinder (Book 3) by Ben Cassidy