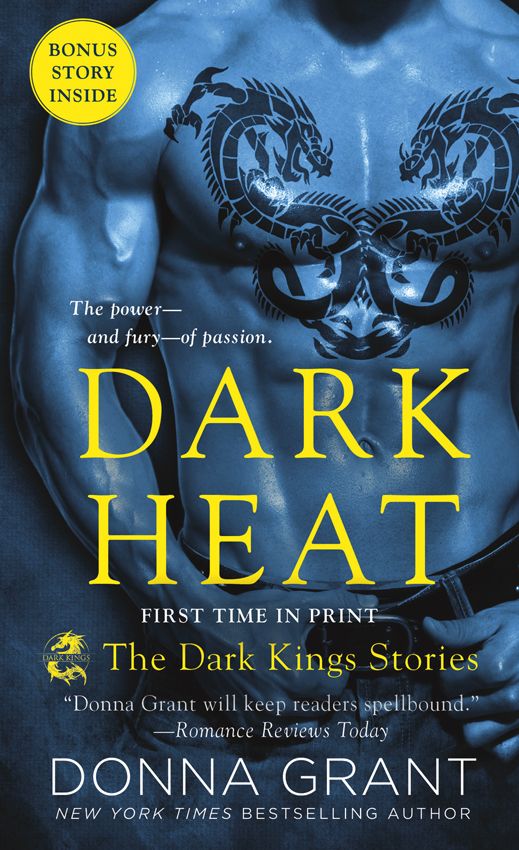 For all the dragon lovers out there!

To my marvelous editor, Monique Patterson. A beautiful person and brilliant soul. Thanks for the phone calls to bounce ideas off of as well as always pushing me—and letting me write my dragons! I couldn’t ask for a better editor.

To everyone at St. Martin’s who helped get this book ready, thank you.

A special note to my assistant, Melissa Bradley, for keeping me sane during release times and, well, the times in between.

To my talented, amazing agent, Louise Fury. There’s no one else I’d rather have by my side in this business.

A special thanks to my family for the never-ending support.

Last but not least, my husband, Steve. I hope you don’t get tired of hearing it, because I never get tired of saying it – I Love You! With you beside me, I can do anything. Thank you, Sexy!

“My luggage is lost?” Cassie Hunter asked for the third time, hoping that maybe the airport staff might miraculously find it.

Her eyes were like sandpaper each time she blinked, and all she wanted to do was curl up somewhere and sleep. For at least a week. Instead, she had this to deal with.

“Aye, miss,” a middle-aged balding man repeated for the third time, his patience running thin if his tightened lips were any indication. “I am sorry, but it does happen. With all your connections out of—” He paused to look at her itinerary on the computer screen. “—Arizona, it’s no’ surprising.”

“Everything I have in the world is in those two suitcases.” She was still reeling from the cost of having had to pay for each piece of luggage as well.

The last few hundred dollars she had were all too quickly whittling away. And she hadn’t even exchanged them for pounds yet. How was her money going to last her for a few months at this rate?

“At least you have your carry-on.”

Cassie blinked at the man before issuing a quick thank you and turning away. There was nothing left for her to do but dig out the address for the house where she was staying to the employee, and pray that somehow her luggage found its way to her.

She glanced at her watch and inwardly winced. Dan was going to be furious. Her brother wasn’t known for his patience, and she’d already wasted almost two hours dealing with the luggage fiasco.

But he was going to have to wait some more, because she had to pee. With her bladder about to explode, Cassie found the bathroom and struggled to get into the tiny stalls with her carry-on, jacket, and purse.

It wasn’t until she was washing her hands that she dared to look into the mirror.

“Dear God,” she murmured in horror as she saw her reflection.

She raked her fingers through her stick-straight brown hair, which was poking up all over the place. There wasn’t time to brush it, but Cassie did take a second to wipe away the smudges of mascara under her eyes before she hurried out of the restroom and then left the airport to the passenger pickup to look for her brother.

She shivered against the cold as she scanned the vehicles for the small blue car he’d mentioned in his text, but found nothing. Worry ripped through her. It would be just like Dan to leave after having to wait so long. Renting a car wasn’t an option either, with what little money she had left.

She doubted she had enough to rent half a bicycle.

“Excuse me,” a female voice said to Cassie’s left.

She turned to find another airport employee standing beside her; the woman’s graying hair was pulled back in a severe bun. “Yes?”

“Yes,” Cassie replied with a tired grin. She could only imagine what her voice sounded like to the Scots.

“Is your name Cassie Hunter, by chance?”

This was getting odd, but there had to be a reason the woman knew her name. “It is.”

“Then this is for you,” the woman said, and pulled out a small manila envelope from her jacket and handed it to Cassie. “A man named Dan gave this to me two days ago and said your flight would be landing this morning.”

“Two days ago?” Cassie repeated as she took the envelope and felt the unmistakable heft and shape of keys inside it. What the hell was going on? “Did he say anything else?”

“Nay.” The woman smiled and walked away.

Cassie sighed as she looked at the envelope. It was amazing what a person could get another to do when money was involved, and Dan had a lot of money. She opened the envelope and found a letter inside telling her where Dan had parked the car and also the address where she was to pick up Duke, his dog.

“I’m going to kill you, Dan,” Cassie ground out with a sniff as she dumped the keys into her icy hand.

She had been nervous about leaving behind everything she knew to live in Scotland, but the prospect of seeing her brother was too good to pass up. Now he couldn’t even be here to pick her up?

No explanation other than it was an emergency. Dan could be thoughtless, but even he had seemed excited at her coming to Scotland. She couldn’t help but wonder if the emergency had something to do with Dan’s wife. They had been having some marital issues.

Cassie squared her shoulders. She could do this. Or so she thought. Finding the car was another obstacle.

Between the cold, her coat—which was hardly enough to brace against the wind—and her carry-on with wheels so old they didn’t roll properly on the pavement, she never thought she’d find the car. And when she was finally standing in front of it, all she could do was laugh.

It was either that or cry.

Cassie was bent over laughing so hard, tears threatened as she stared at what her brother thought was a vehicle but surely had to be a Hot Wheels car.

She fumbled with the keys to open the door and started laughing again at what constituted the backseat. “I guess it’s a good thing my luggage was lost, because there’s no way I’d fit it and myself inside.”

Getting in the opposite side and realizing the car was a standard put another black mark in her brother’s column. Not that she’d say anything to him about it. He was giving her a place to stay when she had nowhere else to go.

At least the car had a GPS. Cassie hurried as fast as her numb fingers would allow her to input the address to pick up Duke—another surprise, since she’d no idea Dan owned a dog.

It took no time to get out of the airport, but she couldn’t say the same for driving. Cassie had never been very good at driving stick shifts, and using her dumb hand was only making things worse. The sound of her grinding the gears could be heard all over Scotland.

Remembering to shift as well as staying on the correct side of the road had her already exhausted brain on overload by the time she reached the kennel.

And then she saw Duke.

“He’s not a dog,” Cassie told the kennel worker in a strangled voice. “He’s a freaking horse.”

The teenager leading the black and white harlequin Great Dane out of the back room smiled. “Duke is a big lad, but he’s got himself a sweet disposition.”

“A good thing too, considering his size.”

Cassie had never seen a Great Dane up close. She really hoped their reputation for “gentle giant” personas was true. Another catastrophe she couldn’t take today.

“Oh, shit,” she said as she remembered the car.

Somehow the teenager got Duke in the front seat with the window down so the dog could poke his head out.

“Dogs get carsick,” he told Cassie, as if that explained everything.

“I had no idea,” she mumbled, and bent to look how Duke would have put his head had the window not been lowered.

She signed and climbed back into the car to input the address for Dan’s house into the GPS. When she saw it would take her nearly four hours to reach the house, Cassie almost let the tears loose.

Instead, she gripped the wheel and looked at Duke, who regarded her with dark, solemn eyes while he panted. Even with the heater set on full blast, the cold still came in through the window.

“I’m not sure if I’m ready for this,” she said to Duke. “I haven’t slept in thirty-six hours, I’m freezing, and I’m driving a stick. On the wrong side of the road. This is a really shitty day, Duke.”

In answer, he nudged his large head against her shoulder. She smiled and scratched him behind the ear.

Her morale fortified—by a dog—Cassie started the car and headed out on the M90 north toward Perth. For several hours the drive was fine, but then they left the road with shoulders for a narrower one that wound into the mountains.

Duke kept his head out the window and wore what Cassie was sure was a smile while she kept the car in the correct lanes. It was difficult not to look at the magnificent scenery, even in the dead of winter.

With the new year just beginning, Cassie viewed this not as a hiccup in her life, but as a new journey. It was a fresh start, and she intended to grasp it with both hands.

Suddenly there was a loud pop, and the car lurched on the road. Cassie sucked in a startled breath and tried to keep the wheel straight so as not to skid off the road and over the side of the mountain.

She slowed the car to a stop, shut it off, and sat with her eyes closed and her heart pounding like a drum. When she opened her eyes again, a glance showed her that even Duke had been wise and pulled his head back inside.

“It’s okay, boy,” she said, and rubbed his giant head, her hands shaking from the adrenaline dump. “Stay here while I go see what happened.”

Cassie reached to open the door only to find it took her two tries before she could grasp the handle. She climbed out of the car and looked over the side of the mountain to the snow hundreds of yards below.

A walk around the car revealed that one of the tires was flat. She rubbed her hands together and blew on them for warmth. She was already trembling from the cold, and she’d been outside for only a few seconds.