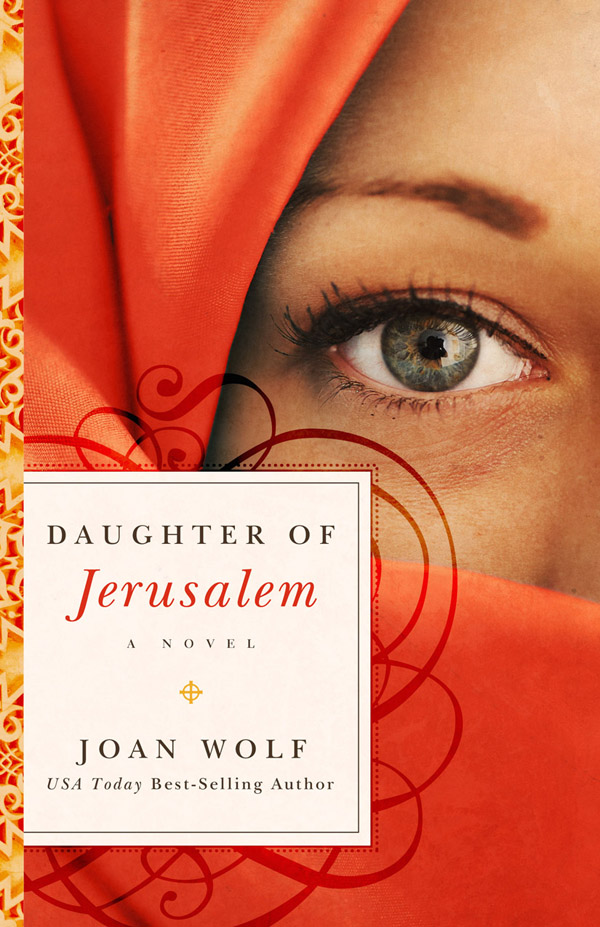 “The way Ms. Wolf handles this often misunderstood and controversial woman is nothing short of a literary triumph. Bravo!”

“In
Daughter of Jerusalem
, Joan Wolf has given us a treasure: a new, vibrant perspective on the life of mysterious Mary Magdalene. As the story unfolds it is impossible not to feel afresh the excitement we knew at our early explorations into our faith.”

“Wolf weaves an original and intriguing tale of treachery and lost love with the discovery of forgiveness, hope, and redemption. An inspiring story not to be missed.”

“At last, a Mary Magdalene we can believe in and root for. Joan Wolf eschews the stereotypes to portray Christ’s beloved female disciple not as a prostitute or ‘fallen’ woman but as a complex, autonomous, intelligent person of beauty and passion as well as piety. Enthralling.”

—Sherry Jones, best-selling author,
The Jewel of Medina
and
Four Sisters, All Queens

“The fictional story of Mary Magdalene drew me in from the first page. Rich with details and wonderful characters, this inspirational tale tugged at my heart and kept me up way past my bedtime. Truly one of the best books I’ve read in a long while.”

“I loved reading the Gospel stories from the perspective of a woman. . . . A must-read for those who enjoy historical fiction!”

—Melanie Dobson, award-winning author,
The Silent Order
and
Where the Trail Ends

“A moving portrait of one of the most curiously overlooked women in history. Wolf deftly shows us . . . that our greatest worth is to be found in the soul.”

“Meet Mary of Magdala, a woman of great courage and love, a woman for all seasons.”

For my mother and father in memoriam.

At the time of Christ the spoken language among Jews was Aramaic. Hebrew was known only by the highly educated, who studied it so they could read the scriptures. A simplified form of Greek was the universal language of the widespread Roman Empire, and most Jews probably spoke this marketplace Greek as well. The Gospels of Matthew, Mark, Luke, and John were written in Greek. Only the Romans spoke Latin. The characters in this book are supposedly speaking Aramaic. What you are reading is a modern English “translation” of that language.

It was deep August when my father and I made the journey from my old home in Bethany to what was to be my new home in Magdala. We traveled with a party of friends from Jerusalem going to visit family in Galilee, and we joined up with other groups in Jericho because it wasn’t safe to travel the route along the Jordan if you weren’t with a large caravan.

Papa was taking me to live with my mother’s sister, my aunt Leah, because I did not get on with my stepmother. He had married Judith shortly after my mother died, when I was three. She was never nice to me. As I grew older, I learned to stand up for myself. We disliked each other intensely and made no attempt to hide our feelings.

A neighbor once told me that Judith was jealous of me. Instinctively, I knew that to be true. On the surface, Judith had the authority in the house, but I always felt that I had more power because I was better than she was. I wasn’t petty minded, and people liked me. My little half brother, Lazarus, and half sister, Martha, loved me more than they loved their own mother. But Judith had brought several highly profitable olive groves to Papa when they married, so he always took her side.

When I was ten, and the confrontations between us were growing worse, my father decided to send me to live with Aunt Leah. He told me it was for Aunt Leah’s sake; her husband had died, and she had no children of her own. I would be a comfort to her, he said. My mother would have wanted me to go.

I knew the real reason behind my banishment was that he was tired of having to listen to Judith’s complaints. He saw an opportunity for peace in his house, and he was going to take it.

It’s not that I didn’t love my Aunt Leah. She lived with her husband and his brothers in a house on the Sea of Galilee, and she always stayed with us in Bethany when she came to Jerusalem for the holy days. She was my mother’s only sister, and there had always been a special bond between us. If my aunt had lived in Bethany or anywhere close by, I would have been thrilled to make my home with her. But I could not feel happy about being sent to Galilee.

Judeans believed Galilee was a barbarian place. All my life I had heard that Galileans weren’t strict Jews, the way we were in Judea. They were lax in their practices, unclean in their table manners, and poorly educated. None of the great Temple scholars came from Galilee. Nobody of any importance had ever come from Galilee. I couldn’t understand how my father, who had often said these things himself, would want me to live in such an uncivilized province.

When I told him this, my father got the hard expression on his face that meant he wasn’t going to change his mind. So Judith packed my belongings, and my father and I left Bethany, the only home I had ever known, to make the long, hot walk north to Magdala in Galilee. Lazarus and Martha cried and clung to me when I left, making me feel even worse, and I was thoroughly miserable as we joined the group of people who were to be our companions on the road.

The trip north wasn’t as horrible as I feared. The farther we walked, the lovelier the landscape became. In August, Bethany was hot and brown and dry; Galilee, in contrast, seemed cool and lush. Dark evergreen forest covered the hillsides, and the sheep looked fat and healthy in their lush pastures. The wheat had been harvested, but everywhere figs hung ripe on trees, and we could see men at work harvesting dates.

Business Makes Strange Bedfellows by E. E. Ottoman
Flower Girl Bride by Dana Corbit
The Devil Rides Out by Paul O'Grady
Nightbird by Alice Hoffman
The Seventh Apprentice by Joseph Delaney
Damaged and the Outlaw by Bijou Hunter
Wolf Block by Stuart J. Whitmore
Then & Now by Lowe, Kimberly
Line of Succession: A Thriller by Tyree, William
The Standing Water by David Castleton