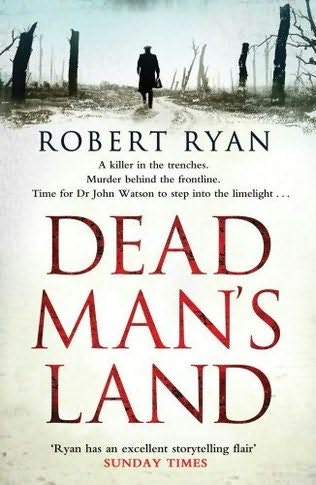 By the same author:

Death on the Ice

The right of Robert Ryan to be identified as author of this work has been asserted in accordance with sections 77 and 78 of the Copyright, Designs and Patents Act, 1988.

This book is a work of fiction. Names, characters, places and incidents are either a product of the author’s imagination or are used fictitiously. Any resemblance to actual people living or dead, events or locales is entirely coincidental.

NOTE FROM THE AUTHOR

And for Clive Powell, a proper Leigh Pal

GEORGE by the Grace of God, of the United Kingdom of Great Britain and Ireland and of the British Dominions beyond the Seas. King, Defender of the Faith, Emperor of India,
etc.
To our Trusty and well-beloved JOHN HAMISH WATSON, MD.

We, reposing especial Trust and Confidence in your Loyalty, Courage and Good Conduct, do by these Presents Constitute and Appoint you to be a Medical Officer in Our Land Forces from the twenty-second day of October 1914. You are therefore carefully and diligently to discharge your duty as such in the Rank of Major or in such higher rank as We from time hereafter be pleased to promote or appoint you to, of which notification will be made in the
London Gazette
.

Given at Our Court of Saint James’s the twenty-second of October 1914 in the fifth year of our reign.

By His Majesty’s Command

As the observation balloon cleared the spindly crowns of the surrounding trees, the major gripped the side of its wicker gondola tight enough for the blood to leach from his knuckles. He risked a quick glance at the rapidly receding forest floor. It was covered with the men of the 3rd British Field Balloon Company (Training), who were fussing over the arm-thick hawser that snaked from the nose of the rising inflatable to the winch on a flatbed lorry, making sure it ran free and easy as the balloon gained height. Others were carefully folding the disconnected umbilicals that had fed the gas from the tanker truck into the greedy belly of the balloon. Forty-eight men to launch one balloon, so they had told him. He could well believe it.

The men of the ground crew were shrinking to insect-like proportions already and what had seemed a huge clearing in the forest was but a small hole in the great swathe of beech, larch and oak surrounding the launch site. Beyond the tree line was his car and Brindle, his driver, shading his eyes as he looked up at the strange apparition that had risen from within the forest. The driver waved and the major felt obliged to return the greeting, albeit rather self-consciously. It didn’t seem at all like correct form to be waving at one’s orderly.

Beyond Brindle was the village they had driven through in the semi-darkness of dawn, with its church now revealed to have a shell-damaged steeple, shocked out of the perpendicular. He could see the black ribbon of the main road stretching off back towards the hospital they had left before the sun had troubled the sky. To his right was the soft, cotton-wool plume of a steam train heading towards France and the coast, perhaps ferrying wounded to the hospitals at Bailleul or St Omer or the great tented encampments that stretched from Calais to Boulogne.

Elsewhere, the sky swallowed the puffs from the smaller locos, shifting men and munitions around this vast hinterland on their iron web of hastily laid rails. He could see the unwavering line of a distant canal, drawn across the landscape as if with a rule, its dark water thick with overloaded barges. Beyond it, a huge lorry park, a man-made crop of green and brown, metal and canvas, slab-sided vehicles sprung up where once wheat or oats had thrived. Over towards Wallonia, fields dense with hop poles, their regular patterns interrupted by deep depressions, as if a giant had pressed his monstrous thumb into the midst of them, scattering and flattening the delicate frames. Shell blasts, he assumed.

From his fresh aerial perspective he could see that the entire land, its fields and forests, ridges and marshes, was covered with a skein of footpaths and sunken roads, old drovers’ paths and bridleways, cartpaths, towpaths, dykes and greenways, all the traditional ways and means of moving across the countryside, from farm to market, village to chapel, hamlet to city, birth to death. And all far too slow for modern warfare. A new grid of roads had been laid over this landscape, wide and brightly metalled, designed to echo to the sound of hobnail boots and the thrum of rubber tyres. Between these new seams stitched into the fabric of Flanders and Wallonia, he could count a dozen whitewashed farmhouses, with their brightly tiled roofs and cobbled courtyards, some filled with toy-sized livestock.

He had almost relaxed when a gusting breeze caught the flanks of the inflatable – ‘
Florrie
’, as the men had christened her. The cylinder bucked like a harpooned whale and the basket suspended beneath it twisted against its lines. The major gripped tight once more.

‘You all right, sir?’ asked Slattery, the lieutenant who was his companion in the flimsy gondola.

No, he wanted to reply to the young man with his glowing cheeks, wind-burned from many such ascents. I am not all right. The major had sworn after the accident that had changed his life that he would never ride in anything that tried to defy gravity, ever. Yet here he was, soaring above a forest clearing in Belgium, borne aloft by a tumescent sausage full of thirty thousand cubic feet of distilled coal product, enough of which had leaked to give the whole countryside the whiff of the gasometer, standing in a basket more suited to a picnic on Hampstead Heath. I am a doctor, he wanted to explain, not a . . . what did they call them? Balloonatics? Yes, that was it. A word that was far too close to lunatics for his liking.

Florrie
gave a groan as she was buffeted again, but this time the wind filled the crescent-shaped pockets in the rear of her gutta-percha envelope and spun her to face into the breeze. The hanging basket began to pendulum and the major’s stomach flipped in a queasy somersault.

‘I must be mad,’ he said under his breath, he thought, but loud enough for Slattery to hear.

‘Not to worry. Worst part of the ascent as the tail stabilizers fill, I always think. She gets a bit twitchy for a minute. You get used to it after a few times.’

‘I’m not intending to do this more than the once,’ he said. ‘I’m only here under protest.’

The major’s request to move closer to the front had been met with much resistance within the Royal Army Medical Corps. There were those who thought a man of his vintage had no place crossing the Channel, let alone being put in harm’s way. Strange, he had answered, that we insist on killing our young men, valuing their lives less than that of one who has put in a good portion of his threescore and ten. His passing would cause precious little anguish in the world, he thought, recognizing a kernel of sadness in the sentiment.

Eventually, his demand to be deployed at a forward station had landed on the desk of the Deputy Director of Army Medical Services in France and Belgium. Any senior medical officer who wanted to experience life at the front, the DDAMS had said, must go up and see for himself what he was letting himself in for.

The front. It had taken on the qualities of a mythical beast in the major’s mind. He had seen its vicious handiwork in the beds at Charing Cross Hospital and on the stretchers at Victoria Station, Dover and Boulogne and in the overcrowded wards at Wimereux, Lille and Bailleul. Wounded men pleaded not to be sent back to face it again, others lamented friends still in its grip, some flinched at the mere mention of it and a brave few were eager to do battle with the front once more, as if it were some test of manhood they had somehow failed. In his mind, the front was a living creature capable of chewing up and spitting out thousands of men at a time. He had seen its sinuous shape marked on maps and talked of in hushed or awed tones, as if the cartographer’s legend said: ‘Here be Dragons’.

‘Right,’ said Slattery, peering upwards at
Florrie
and apparently satisfied with what he saw, ‘it’ll all be smooth riding from now on.’

The lieutenant busied himself with freeing two pieces of rope that had been tied to one of the gondola cables. Let loose, they dangled on either side of him and stretched all the way up to
Florrie
and over her flanks. ‘Just in case, Major, you should know about these two pieces of kit. This one is the bleed valve. It takes us down slowly, with or without the winch. This one –’ he tapped the cable that was marked with a red band ‘is the panic panel.’ He pointed up at
Florrie
. ‘Whatever you do, don’t touch it. It rips out a piece of the envelope and vents a large proportion of the gas. Gets us down fast if there is an enemy plane coming. Sometimes too fast. But don’t worry. Nothing much happens at this time of day. Even wars stop for brekkers.’

As the balloon calmed, the major looked down once more at the Belgian soil they had recently vacated. How high were they? He stared over into France, trying to focus through hazy air, wondering if they would gain enough altitude to see England.

Hard Days Night (The Firsts Book 8) by C.L. Quinn
Laurie Brown by Hundreds of Years to Reform a Rake
Antiques Chop (A Trash 'n' Treasures Mystery) by Allan, Barbara
In The Garden Of Stones by Lucy Pepperdine
Gifted To The Bear: A Paranormal Shapeshifter Romance (The Gifted Series Book 1) by Amira Rain
Down the Road: The Fall of Austin by Bowie Ibarra
Precious and the Mystery of Meercat Hill by Alexander McCall-Smith
The Last Testament by Sam Bourne
The Deadliest Alien Artifacts (Story Collection) by V Bertolaccini
Conundrum by Susan Cory