Then, darkness engulfed him.

“
What happened, then?” prompted the young sailor when Captain Drake ended his tale.

“
What happened?” repeated the old man, “Tis world happened. Th’ one you live in. No shambling dead, no Plague. No Curse.”

“
But what about Kaya? Did she really kill herself?” Now, the young lad was curious.

Drake eyed him, then finished his drink and rose from his stool.

“
No, you promised me the proof of your statements, Sir,” the seaman protested.

Drake lowered his aching back to the chest and opened it.

The boys eyes widened in disbelief at the sight of what lied inside the box.

The young lad staggered backward to get some distance from the thing which twitched and quivered inside the container.

“
After Kaya clubbed me senseless she sacrificed Red Leg’s life to Mabouya. This lifted th’ Curse, ‘cause all dead returned to thar graves. Alas, since me gal decided to cheat on th’ Baron, he decided to cheat on her. Ye see, th’ Baron had asked fer her to remain pure, but she’d offered me her virtue. Her sacrifice would be worthless. Kaya understood this when th’ Risen had attacked th’ Banshee despite her protections. So, she had opted to sacrifice her innocence by committing murder.”

“
Where’s she now?” the boy asked still gazing at the now closed chest.

“
Dead. She’s been killed one month ago, along with all me kids.”

“
Tis was th’ Baron’s joke. Red Leg returned from th’ grave and took possession of th’ Banshee’s Cry. His ship is th’ last of the living dead unto tis world. The Black Brig sails th’ oceans continuing th’ Plague’s legacy, yet it’s no longer able to spread it. It only feeds on th’ butchered pain.”

“
Who’s that arm from?” demanded the youngster.

“
After he killed me Kaya and me daughters that was th’ only thing I’ve found of him. He left it on purpose. To let me find him. Ye see, young lad, tomorrow will depart to hunt down the Black Brig.”

Inside the chest Red Leg’s severed arm twitched in anticipation.

Jeffrey Kosh (born October 28, 1968) is the pen name of an author living in Thailand. He had various art experiences, before discovering his love for writing fiction. His different careers have led him to travel extensively worldwide, causing a passion for photography, wildlife, history, and popular folklore. All these things have had a heavy influence on his writing. Extroverted in public, he is very private in his work, preferring complete isolation to ‘tune’ his mind to the ‘Great Tales Radio’. He believes that stories are already out there, waiting to be put on paper. Jeff currently lives in Thailand, with his wife and four cats, plus a lot of geckos.

Feeding the Urge is his first self-published novel.

With a unique voice and writing style, Jeffrey Kosh weaves a fascinating story in Feeding the Urge. Feeding the Urge is a thought provoking novel that leaves the reader pondering what is truly good and what is absolute evil. This is an Indy author to watch.

Kat Yares – Author of Vengeance is Mine

Kosh has the chops to be a player in the world of the written word. "One to watch!"

" Jeffrey Kosh has a natural talent for spinning an entertaining, engaging story. Not only does he paint a picture with your mind's eye, but captures it's full attention!

Heaven Leigh Eldeen – Author of The Demon Side 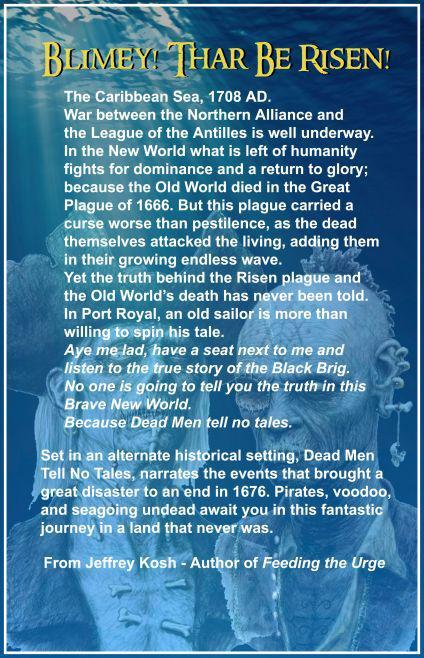