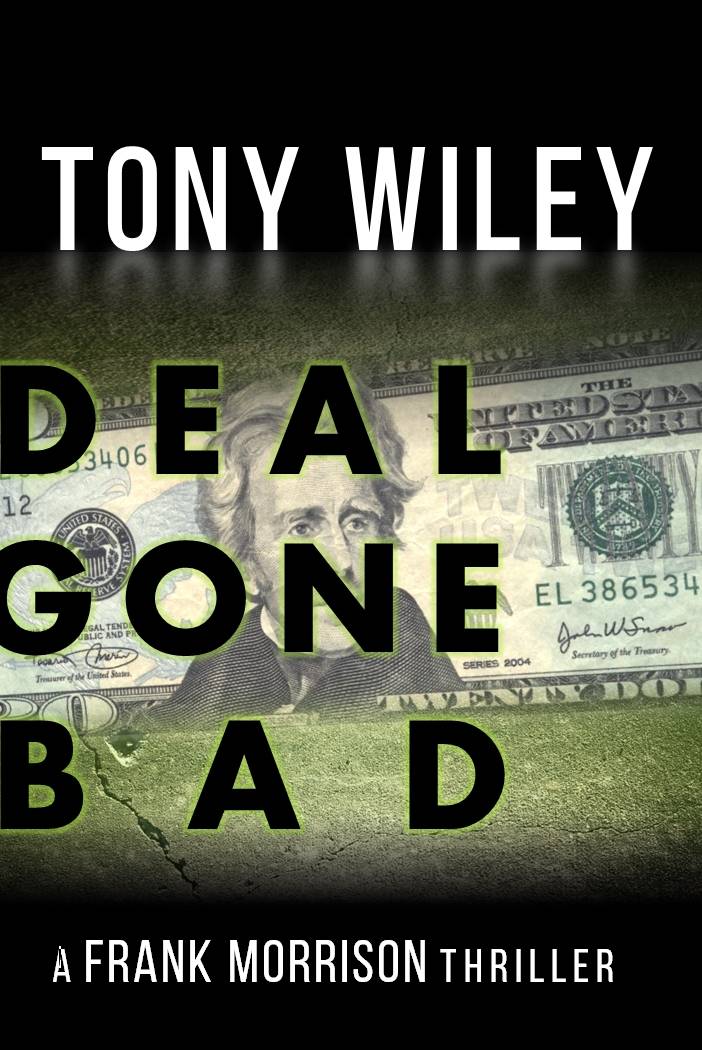 All rights reserved. No part of this
novel may be used in any form without prior written permission from the author.

This is a work of fiction. Any
resemblance to actual persons or events can only be coincidental.

Visit our website at tonywileybooks.com and join
the newsletter to receive updates on new publications.

At eight o’clock, Frank
Morrison walked out of Acton Correctional Facility a free man. He was restless.
Eager to move on. He had spent three years, two months and seventeen days locked
up in there. A long time for anyone. An eternity for him.

He started walking toward the
bus stop, two hundred feet down the cracked sidewalk. He could have made a few
phone calls. Arranged for someone to come and pick him up. But for what he had
in mind, he thought it was better to leave alone.

From the corner of his eye,
he registered some movement. A dark mass appeared as the air filled with the
low rumble of a car. A voice called out to him.

That voice. He stopped, turned
his head and cupped his hand over his eyes to block the low morning sun.
Not
her. What is she doing here?
he thought. The woman was staring at him
through the open passenger window of her patrol car, a smirk plastered on her
face. It was Claire Sanford. The sheriff’s deputy who had arrested him way back
when.

He summoned a smile. “Up until
now I was doing great,” he said.

Sanford killed the engine,
got out of the car and came over to him.

She moved with the grace
of a natural athlete. One of these track and field types, he figured. Must have
been a star in college. She stood at least six inches taller than him. A whisker
under six feet. She had a slim waist, strong shoulders and long arms. Her gaze
was open and direct. He hadn’t seen her in a long while, but she hadn’t changed
one bit.

Here was a woman who always
seemed ready to play ball.

Morrison nodded toward the
star-shaped badge pinned on her shirt pocket. “Just in case you’re wondering, I’m
not staring at your breasts,” he said. “Congratulations for making sheriff.
Though I guess I deserve a bit of this myself.”

She stopped a foot away
from him on the sidewalk and locked her fists on her hips. He no longer needed
to shield his eyes from the sun.

“You think you had
something to do with it?” she said.

He shrugged. “That’s what
the local papers wrote, no? You rode my arrest all the way to the county
elections and won by a landslide.”

She sighed. “You know,
you’re not half as important as you think you are, Morrison.”

“Really? Then why are you
here?”

She shrugged. “Just doing
my job.”

He tilted his head. “I’ve
only been out for a minute, Sheriff. Some people would say you’re harassing
me.”

She leaned in. “I’m here
to serve you a friendly warning,” she said. Then she buried her eyes deeply
into his. He could feel her breath on his face. It was more hurried than he
would’ve thought. “Have any idea what it might be?”

He paused. “Let me see. Something
about not committing another crime within your county lines or you’ll ride me
out of town on a rail? With tar, feathers and the whole lot?”

“Something like that, yeah,
only I’d bring you right back here,” she said with a nod toward the correctional
facility.

He shook his head and let
out a breath. “First all your petitions to the parole board and now this.”

The smirk instantly vanished
from her face. “Those boards are way too soft. I’ll make no excuse for making
sure you did all your time.”

Morrison smiled. “Give me
a break. That was my first conviction.”

She remained dead serious.
“It was only your first conviction because nobody had ever caught you before I
did. Not because you never did anything.”

He shrugged. “That’s
beside the point. I committed a crime, yes, but a nonviolent one. Victimless, I’d
even say. Although I don’t expect you to follow me on this one. Usually that
means parole.”

She wouldn’t have it. “A
crime is a crime. You deserved every single day that you spent in there. And
more.”

Her attitude didn’t
surprise him. She had that self-righteous fiber buried deep within her bones. He
guessed that came with the territory. Nothing he could ever do to make her
change her mind. He shook his head. He didn’t really care what she thought of
him. As long as he was free.

“Relax, Sheriff. I’m
reformed, now. I’m past all that crap.”

The smirk was back on her
face. “Really? Then tell me. What are you up to now?”

“If you don’t mind, that’s
none of your business. Thanks to you, I served up a full sentence. I’m
completely free now. No strings attached.”

She shook her head. “A guy
like you doesn’t flip burgers for nine bucks an hour. No way.”

“With your criminal
record, that’s about the only job you could get.”

“Thanks for the
compliment,” he said. “Sort of. But I could make you one myself.”

She didn’t say anything.
She just made a face that meant something like “Go ahead, hit me with your best
shot.”

“If we had met under
different circumstances, you could’ve been just my type.”

She let out a short laugh
and half-turned. For a brief moment, the sun shone again in Morrison’s face, making
him squint. She moved back to her original position. “Well, don’t hold your
breath, buddy boy,” she said. “I like my men tall and legit to start with.”
Then she looked around and added, “What’s the matter here, no girlfriend to
pick you up? What happened to that cute redhead you were with?”

Morrison waved his hand.
“Water under the bridge,” he said.

She nodded. “Oh, that’s
right, that’s what prison tends to do.”

“But you could give me a
ride to town.”

She shook her head. “That
would be an improper use of public property. Besides, I’m saving it for the
return trip.”

She sighed. “I know your
type, Morrison. You’re about as likely to walk the straight and narrow as I am
to win the Powerball. You can now do whatever the hell you want. Just make sure
you don’t do it within my county lines, OK?”

She removed her hands from
her hips and made as if she was going to turn around and leave.

Morrison quickly
interjected, “Before you go, can I give you a piece of advice?”

She stopped in her tracks.
Stared at him.

“Don’t take it personal,
Sanford,” he said. “I certainly don’t. You arrested me? Congratulations. It’s
all fine by me. Even though you got me more by luck than anything else.”

That last bit stung her,
he could see it. But she quickly swept it under the rug.

“Here we go again with
your self-importance,” she said.

He pressed on. “You know,
I did not intentionally ridicule you before you arrested me. It just happened
that way.” He raised his right hand. “Swear to God.”

She did not bite. She
would not be drawn into it. Instead, she just shook her head, turned around and
walked back to the black Charger.

She opened the door and paused.
“Remember, Morrison. Stay away from my county lines. And have a good life.”

Then she ducked back
behind the wheel, got the big V8 humming again and left in a roar.

Morrison shook his head.
He started for the bus stop again.

Don’t worry, sweetheart
, he thought,
I’ll be
outside your county lines soon enough
.

Not the most pleasant way
to reconnect with his freedom. He had not expected balloons and ribbons, but he
had not expected this either. What a pain that Sanford. Anyway. He decided to
shrug off the whole incident. He didn’t really care about her and her opinions.
Only the future mattered.

As he strolled along the
broken sidewalk, he put his hand in his pocket, just to feel the brass key
between his thumb and middle finger.

Minutes ago, he had
recovered his few remaining possessions. His clothes. They felt so good after
years of wearing a dark green jumpsuit. So civilized. His wallet, with about
five hundred dollars, his New York State driver’s license and two expired
credit cards. His Rolex. Expensive but well worth the two thousand dollars he’d
paid for it. Over the years, the watch had served him well. Gave him instant
credibility, whoever he was impersonating. Always worked like a charm.
Especially with women. His female friends all grudgingly acknowledged that.

And this dull brass key.

Morrison had been dreaming
about it every single day, for the last three years, two months and seventeen
days. It would unlock his future. Enable him to get back on the fast track. If
all went well, he would get to use it this afternoon. Only a short bus ride to
downtown then a longer one on a Greyhound stood in the way.

Then his life would resume
properly. As if the last three years had just been a bad dream. Sheriff Sanford
included.

Out in the distance, her patrol
car got smaller and smaller. Then it disappeared behind a curtain of pale green
foliage down the curving two-lane road.

Up close, the bus stop was
a filthy thing. Its glass panels were etched with graffiti, the cement floor
littered with old papers and wads of bubble gum. If it hadn’t been for the
timetable hanging in the middle of the far panel, he wouldn’t have bothered to go
in.

He found the next arrival
time in the dense mass of fine print and looked at his watch. Good. The bus
would pick him up in less than ten minutes. He just had to wait.

He stepped back and looked
around.

Instinctively, since the
bus wasn’t due to arrive just yet, he expected to see a deserted road. Which
was ridiculous because even though it was a very quiet county road, regular cars
could come and go at any time. That’s why he quickly overcame his initial surprise
when the black Lincoln Navigator with dark-tinted windows approached. Just
another SUV with a random Joe going about his business.

But he didn’t expect the
Navigator to stop in front of him.

And he even less expected
what he saw when the front passenger window rolled down.

Who said that life is what
happens to you while you’re busy making other plans? John Lennon perhaps? He
wasn’t sure. But it rang true enough.

Morrison had had three
years, two months and seventeen days to prepare for this. But now, barely fifteen
minutes into it, his carefully prepared plan was going out the window.

As he stared at the
silencer gun aimed at him, he realized that he would have to face a slice of
life that wasn’t at all what he had planned for.