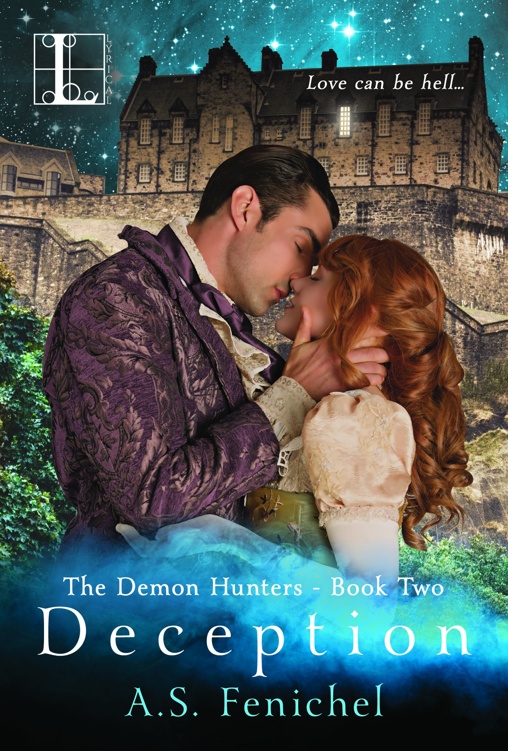 When Demons threaten Regency London, only a Lady can stop them.

Lillian Dellacourt is beautiful, refined and absolutely lethal. She’s also the most feared and merciless demon hunter in The Company. She’s come a long way from the penniless seamstress’s daughter sold to the highest bidder, and it wasn’t by trusting a man, let alone an exiled Marquis with more on his mind than slaying the hellspawn . . .

For Dorian Lambert, Marquis de Montalembert, being sent to keep track of Lillian is no mean task. He’s wanted the fiery vixen since he first heard of her five years ago. But wooing the lady while fighting the demon uprising is no easy feat, especially when the lady’s tongue is as sharp as the Japanese sai blades she favors for eviscerating the spawn of hell.

These two will have to learn to trust each other fast, because the demon master is back, and he’s planning to turn Edinburgh into a living hell…

For Dave Mansue, the man of my dreams.

And the kickass women in my life.

There are so many people who help me along the way. They boost my spirits when I’m sure the book is terrible, give me tough love when I’m lazy and applaud me when all is said and done. To Karla, Amanda, Stormie, Kathleen, Llonda, Linda and Mom, I can’t thank you enough. Thank you to my Editor, Penny Barber who is always there for me with a kind word even when she’s telling me all the things that need fixing.

Gripping the chair arms to keep herself seated, Lillian fought an urge to leave and never set foot inside Castle Brendaligh again.

It had been a demoralizing battle and they had lost, but they had lived. They had done all they could, but still the demon master had ascended into man’s world.

“You failed and we are all likely to die because of it. I hold every person at this table responsible for the state of England. You have ruined us.” Lord Clayton’s voice grated on Lillian’s nerves.

Accounts of the battle were clear. Nearly everyone in the room had risked their lives trying to disrupt the ascension, not to mention keep the earl’s daughter, Belinda, from becoming a demon sacrifice. Making such a show of ferocious reprimands insulted their brave and selfless efforts. If not for the fact that he was her best friend’s father, she might have indulged her desire to pull a
sai
blade from her boot and slice his throat.

As if Lord Clayton, the Earl of Shafton, needed to attract more attention, he waved his hands. “You had one mission, to keep the master from entering our world. All you had to do was kill one demon, but you failed. You should all be shot for treason. Treason!”

His bright red face gave her hope his heart might fail and save her the trouble of killing him.

Other hunters at the table murmured, but no one spoke out.

“Everyone in this room is to blame. You had the perfect opportunity to end this mess. Now the master is free of his realm and living in ours. It’s only a matter of time before he is strong enough to destroy everything we hold dear. When your families are killed mercilessly, will you sit here so unrepentant about failing in your duty?”

Lillian missed Reece’s steadying presence. Reece might have even been able to stop his lordship’s tirade with a few quick-witted remarks. Her partner had nearly died, and now lay upstairs recovering from demon poisoning.

“Don’t you roll your eyes at me, Belinda. You are equally to blame. You were with the master for days and made no attempt to destroy him.”

Gabriel, Belinda’s husband, bristled. It was of course a ridiculous statement. The Earl of Tullering was not used to public abuse of his family. “Just a minute, my lord. You are out of order. Belinda was in no position to defeat the demon master. The information she gathered will be very helpful in our eventual victory.”

Shafton pointed a fat finger. “I do not want to hear about information that will take years to decipher. You, Tullering, are by far the most culpable. You and that woman”—he pointed at Lillian—“made a conscious choice not to destroy the master.”

Lillian reached toward her boot and let the hard steel of her
sai
blade handle bring her comfort. One second and Shafton’s head could be rolling down the long table and land in Drake Cullum’s lap.

Besides Shafton, Drake and his assistant, Dorian Lambert, were the only ones present who had not been at the battle. Their leader, Drake, had attended to assign new orders to the hunters.

Shafton said, “You could have destroyed the beast as it rose and was weakened. I know you had the opportunity, but you chose to save yourself. It was selfish and stupid.”

Lillian could kill him and no one would be able to stop her. Of course, there were always consequences when dealing with men in power. She’d lose her home within The Company. Yet another arrogant earl would not take her from her rightful place. She was in control. It was nothing like her youth and the titled man who’d ruined her life.

“It was the wrong choice, Belinda. You might have cost us our one chance to stop this.” Shafton narrowed his eyes on Lillian.

Lillian said, “I can imagine your pleasure if we had allowed your only child to become the master’s sacrifice. Perhaps we should have stood by and watched until the master, with his full power rose, from the depths of hell and destroyed us all. As it is, Reece Foxjohn is still recovering from battle and the rest of us might have been sucked into the demon’s realm. But by all means, my lord, go on and tell us how you know we willfully failed on our mission. I do not recall your life being in danger that day at Fatum Manor. You were safely tucked away in your castle while the rest of us faced death or worse.”

“You are out of order, Dellacourt.” Shafton said her name as if it were a curse.

Lillian wasn’t sure when she had stood up, but clutching the leather wrapped steel, she rounded the table toward the earl. “If you have something you want to say about my abilities, my lord, I suggest you do so. I will be happy to display them for you, and we can evaluate them together.”

“Miss Dellacourt.” A warning came from the other end of the table.

“You were not there. You cannot know if we could have destroyed the master. As far as I’m concerned, we made the only choice possible under the circumstances. Maybe if your intelligence had supplied us with the location of the gateway before the master had grown so powerful, we might have been able to seal him in.”

“How dare you imply that I failed in some way? You who completely disregard orders at will.”

She had only ever hated one man the way she despised Shafton, and he too was an earl. At least that one was dead. Steeling her nerves, she slid the
sai
blade through the pocket cut in her skirt. “You speak of orders that were selfish and almost succeeded in getting your own family killed.”

“You have no right to question me or my motives.” To his credit, he faced her and stared her in the eye.

“I have every right when you point your fat finger at me.”

“Who do you think you are? I know where you come from Lillian Dellacourt. I know what you are.”

Drake Cullum pounded the table. “Shafton, that will do.” The demon hunters’ leader stood rigid, narrow-eyed. He was formidable when he was calm, but enraging him was never a good idea. He was furious now.

Had she gone too far? The idea she might have overstepped her bounds with Cullum was enough to make her relax the grip on her blade. Lillian turned and stormed from the dining room.

Shafton yelled something about not having dismissed her from the meeting.

Once in the hallway, she pulled her second blade and turned to go back in and finish what she’d started. It would be nothing to remove his pompous head from his shoulders.

Cullum stood in the doorway. He smiled at her and closed the door, barring her reentry.

Had she ever seen him smile before? No instance came to mind. She stomped toward the front entrance. She’d leave the damn castle, get her carriage, and ride like the devil back to London. Yet the one person in the world she could really talk to was a resident of Brendaligh. Holding her full skirts with both hands, she sprinted up the curved grand staircase.

Brendaligh, the Earl of Shafton’s Scottish holding, boasted fine marble floors, crystal chandeliers, and expensive draping. To the casual observer, the entry looked like any other wealthy man’s country home, but upon closer inspection, they would find the bedchambers rather bare and the ballroom fitted for mock combat sessions. Instead of fancy draperies, shields and weapons hung on the walls. He’d converted the estate from its former grandeur into a school for demon hunter training. Of course, in Lillian’s opinion, it was also the earl’s way of shirking his responsibilities to his family.

His wife and daughter had never been to the Scottish castle until Belinda’s life was in jeopardy, and she descended on her father unannounced to verify his part in the demons’ desire to capture and kill her. Before that, the earl had hidden his knowledge of any hunting activity and made excuses to remain in Scotland.

At the top of the stairs, she turned right, then entered a small salon, set up as a kind of hospital. A strange little demon’s poison had turned a strapping man into the withered soul sitting in a wingback chair near the window.

Her heart tightened painfully. It took willpower not to clutch her chest.

Reece Foxjohn had been her constant companion for the last five years. His handsome face showed strain where there had always been joy. His bright blue eyes had dimmed.

Elizabeth Smyth picked up the untouched food tray from the table beside Reece, whispered something to him, and turned toward the door. Slimmer from her hunter training, she looked up and smiled. “Miss Lillian, I’m so happy to see you.”