Desperate Domination (Bought by the Billionaire #3) 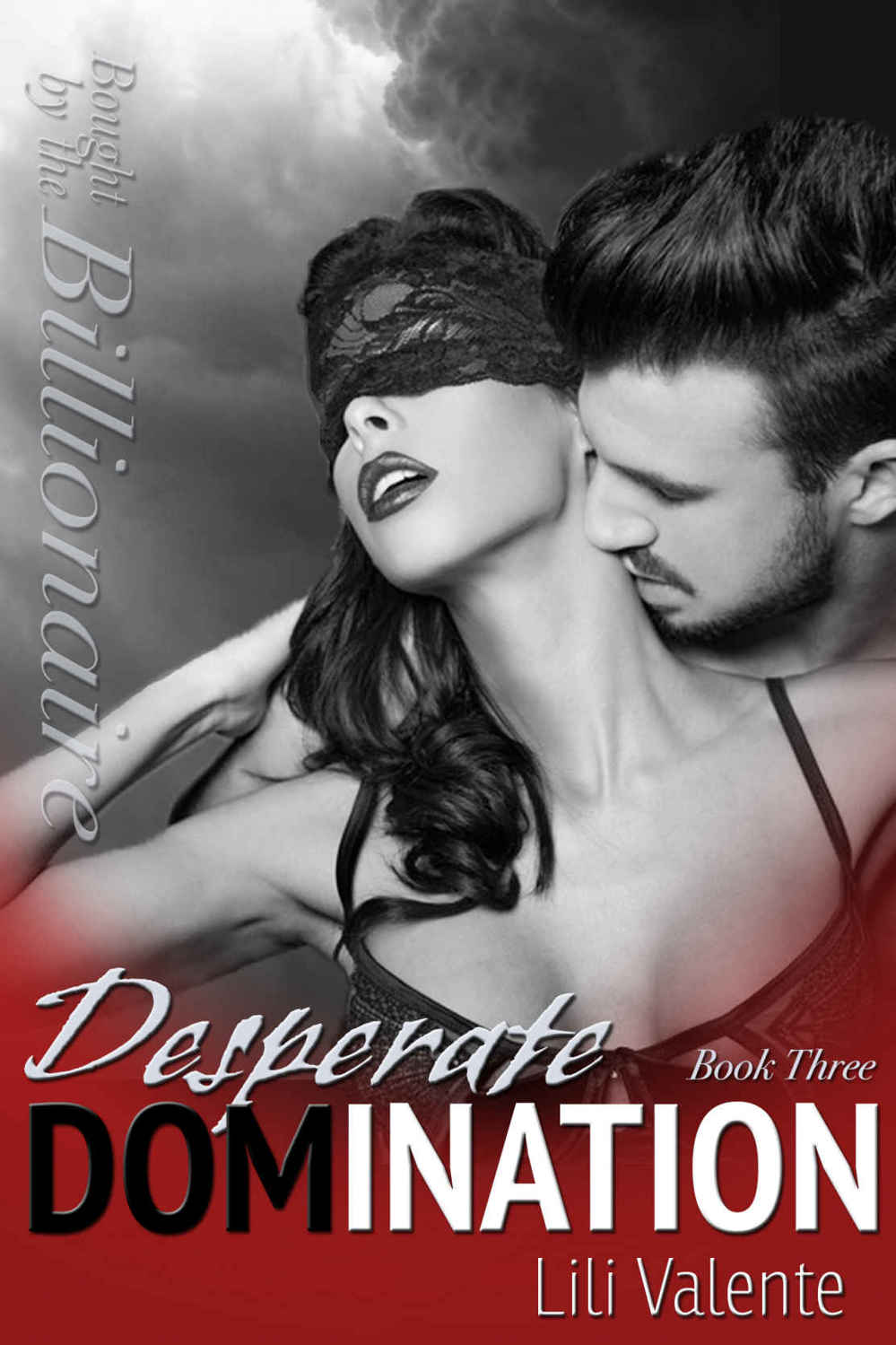 Bought by the Billionaire

All Rights Reserved
Copyright
Desperate Domination
© 2015 Lili Valente
All rights reserved. Without limiting the rights under copyright reserved above, no part of this publication may be reproduced, stored in or introduced into a retrieval system, or transmitted, in any form, or by any means (electronic, mechanical, photocopying, recording, or otherwise) without the prior written permission of the copyright owner. This erotic romance is a work of fiction. Names, characters, places, brands, media, and incidents are either the product of the author’s imagination or are used fictitiously. The author acknowledges the trademarked status and trademark owners of various products referenced in this work of fiction, which have been used without permission. The publication/use of these trademarks is not authorized, associated with, or sponsored by the trademark owners. This ebook is licensed for your personal use only. This ebook may not be re-sold or given away to other people. If you would like to share this book with another person, please purchase an additional copy for each person you share it with, especially if you enjoy hot, sexy, emotional novels featuring Dominant alpha males. If you are reading this book and did not purchase it, or it was not purchased for your use only, then you should return it and purchase your own copy. Thank you for respecting the author’s work. Cover design by Bootstrap Designs. Editorial services provided by Leone Editorial.

WARNING: This is a white-hot, panty-melting, boundary-pushing read. Not intended for the faint of heart.

Jackson Hawke might be a monster, but he’s Hannah’s monster. They belong together and she’s determined to show Jackson she can love every part of him-light and dark, cruel and gentle, lost soul and Dominant man.

Jackson knows he doesn’t deserve her. He is broken and twisted and wrong inside, but when Hannah touches him it feels right,
he
feels right in a way he hasn’t in so long.

Can a monster learn to become a man again? Or will dark forces from the past claim Hannah’s life before she can claim his heart?

Desperate Domination is the 3
rd
in the Bought by the Billionaire serial romance series and ends in a CLIFFHANGER. For maximum enjoyment it should be read after books one and two.

Divine Domination, the final book in the series, will release in August 2015

CHAPTER ONE
Six years ago

Before you embark on a journey of revenge, you should dig two graves.

Or so Confucius said.

Harley Mason had never been the type to put stock in conventional wisdom. She resented authority figures—even those who had died thousands of years ago—and didn’t believe anyone in the unjust, uncaring, fucked up world had answers to the big questions. People were crazy and the ones who considered themselves sufficiently enlightened to dispense wisdom to the masses were usually the craziest of all.

She preferred to trust in her gut, her wits, and the sharp-toothed creature deep inside of her that demanded debts be paid. She’d learned at a young age that life wasn’t fair, but she refused to believe it had to stay that way. The cheaters could be caught, the untouchables brought low, and the wicked crushed beneath the boot of her uniquely heartless brand of justice.

The man who had destroyed her mother deserved to suffer.

Not long before Harley’s ninth birthday, Emma Mason had disappeared, leaving nothing behind but a note saying, “The heart wants what it wants.” Harley and her twin sister, Hannah, had suffered through the usual stages of grief after a traumatic loss and resigned themselves to living without a mother when, early one morning nearly a year after Emma had vanished, she’d reappeared at the front gate, a half-starved, anxiety-riddled shadow of the woman she’d been. Their mother’s body had come home, but her spirit had never returned.

Before, Emma had helped with homework after school and sent the staff home early so she and her daughters could make dinner together, choosing recipes from her favorite French cookbook. After, she abandoned Harley and Hannah to the care of their nannies during the school year and their Aunt Sybil during the summers. She acted as if it pained her to set eyes on her children, but Emma was too relentlessly miserable for Harley to take it personally. Her mother also shunned walks in the garden, good books, charity work, her sewing room, afternoons in the kitchen making coq au vin, and almost everything else that had once given her joy.

No, Harley didn’t blame her mother for being broken. She blamed the person who had broken her. She swore to herself that someday she would make the man pay, and finally, after years of searching for clues to the stranger’s identity, she’d learned his name.

And so she had launched her summer of revenge—intending to shatter Ian’s son and teach the bastard what if felt like to see someone you love ruined forever—and she hadn’t regretted a moment of it.

But most of all, she wished she’d never seduced Jackson’s best friend. She wished she’d never met Clay, never loved him, and never agreed to run away and get married this weekend. If she could take it all back, she would, and then Clay wouldn’t be dying in this car beside her.

Should have dug three graves.

Three graves. One for her, one for Jackson, her enemy’s son, and one for Clay, the only man Harley had ever loved.

“I love you. I’m so sorry,” she sobbed, reaching for Clay’s arm as the car’s roof bounced off the ground and they spun upright once more. But the sound of metal screaming, as it caved in around them, made it impossible to hear her own voice.

Later, when she came to, hanging upside down by her seatbelt with Clay dangling beside her, his eyes wide and death stiffening his handsome face, she would regret that most of all. He hadn’t heard her say that she loved him one last time, and he didn’t know that she was sorry.

“I’m so sorry,” she sobbed, tears streaming up her forehead to run into her hair, stinging into a cut on her scalp. “It should have been me. I wish it were me, Clay. I’m so sorry.”

She cupped his face in one shaking hand, leaving a mark behind on his cool cheek. In the moonlight streaming in through the crumpled windows, the blood smear looked black. Harley stared at it, strangely mesmerized by the thickness of it and the slow drip, drip, drip as the cut on her arm leaked onto the roof below her.

She was still hanging there, tears flowing the wrong way and her pulse slowing to a dangerous—
thud…du-dud….dud
—when a hand punched through the web of crinkled glass on the passenger side, making her flinch and cry out.

“Clay’s dead,” she whimpered, not turning to look at the dark-eyed boy her father had hired to follow her around this summer.

Dominic was allegedly part of a security team hired to protect her—her father said he’d been receiving threats from an old business rival—but Harley suspected Daddy was simply using that as an excuse to spy on her. She’d come by her sneaky streak honestly and had learned not to trust her father around the same time she’d learned to walk.

Any other summer, she would have had an affair with Dominic, just to piss off dear old Dad—he hated it when she fucked the help—but she’d been too busy ruining two men’s lives to have time for the slim Puerto Rican boy with the kind eyes.

“I’m sorry,” Dom said as he reached for her seatbelt. “Let me help you out.”

“Stop.” She shoved at his hand as it fumbled near her waist. “Go away. I won’t leave him.”

“We have to go, Harley,” Dom insisted. “This wasn’t an accident. I saw the truck that pushed you off the road. It was the same one that’s been parked outside the bar for the past two weeks.”

“What?” Harley’s question became a moan as Dom succeeded in releasing the seatbelt. She slumped down onto the dented roof, every bruise on her body crying out in protest.

“It was the man in the camo hat,” he said, helping her shift onto her back. “The one who was watching you at the bar. He was at your apartment complex tonight and followed you when you left. I tried to call your cell to warn you, but there was no answer.”

“I had the ringer off,” she said, lips moving numbly. She’d always turned her ringer off when she was with Clay, just in case Jackson called. She hadn’t wanted to explain why she was still taking phone calls from a man she claimed frightened her.

When she’d told Clay that Jackson had hit her, he’d been devastated, his usually smiling blue eyes filling with so much pain that, for a moment, she had wished she could reel the lie back between her lips. But back then, hurting Jackson’s father had mattered more than sparing the best man she’d ever met. Back then, she’d been too stupid to realize that she’d finally found a love bigger than all the bitterness and hate.

If only she’d laid down her weapons and walked away before it was too late.

“We need to get you somewhere safe,” Dom said with a sigh. “If this guy is a professional, he’ll want to make sure you’re dead before he reports back to whoever he’s working for.”

Dom pulled her through the window, dragging her spine against the twisted metal of the crumpled frame. Every inch of her body throbbed with distress, the wounds she’d inflicted to fake her police report providing a dull background agony to the wail of new injuries. She’d lost a lot of blood and when Dom helped her to her feet, the world spun in great looping circles.

“Lean into me.” He grunted, tightening the arm banded around her waist. “I need you to stay awake, Harley.”

“I’m awake,” she mumbled as she staggered along beside him, following a narrow trail through the woods.

She was awake and alive and Clay was dead.

The horrible mantra thrummed through her thoughts, drawing a sob from deep in her chest. She didn’t want to get to safety; she wanted to lie down next to Clay and wait for someone to send her to the other side to find him.

She’d never believed in heaven or hell, but the way she loved Clay made her hope this wasn’t the end. It couldn’t be, not when they were just getting started, when she’d finally realized that there was something more important than revenge. There was love, blue eyes filled with laughter, and a man whose kiss softened the once impenetrable walls around her heart.

But now those lips were cold and she would never kiss them again.

Her knees buckled as she went limp with grief, sliding down the side of Dom’s wiry body.

“Stand up,” he ordered, hitching her higher. “I can’t carry you up the side of the mountain, Harley. I need you to walk.”

“I can’t.” She sobbed, her head bowing over her chest. Clay could have carried her. Jackson too. She’d had two brave, strong men devoted to her and she’d destroyed them both. Clay was dead and Jackson would wish he were dead—sooner or later—and it was all her fault.