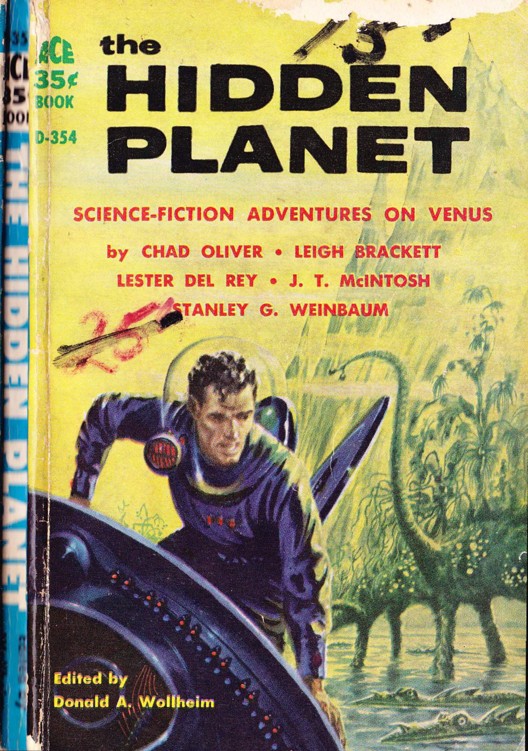 The world of Venus may be THE HIDDEN PLANET
to
astronomers
but it's no secret to the vivid
imaginations of good science-fiction writers! Instead, it's the locale of as
exciting and adventure-packed a group of stories as have ever been gathered in
one book.

You'll read the short novel of the man who
made Venus the breeding ground of his experiments with people, until the
product proved too hot for Earth to handle. There's the story of the adventurer
who probed too deeply beneath the depths of Venus's mighty ocean. There are
the explorers who met the philosophical plants and the jungle travelers who
found that what Venus
had to offer
made Darkest Africa
seem pale.

There's lots of exciting adventure on
The Hidden Planet,
such as only Chad Oliver, Leigh Brackett,
Lester Del Rey, and the others can write.

DONALD
A. WOLLHEIM,
who
edited THE HIDDEN PLANET, has the distinction of having conceived and edited
the very first science-fiction anthology ever published (1943). An authority
on science-fiction for over a quarter century, he has written and sold stories
to many periodicals, he has edited magazines of fantasy, and is the author of
several published novels.

A native New Yorker, he and his wife and
daughter share their home with one of the world's most extensive collections of
fantasy literature.

Previous science-fiction and fantasy
anthologies edited by Donald A.
Wollheim
for
Ace Books
include THE END OF THE WORLD (S-183), THE
EARTH IN PERIL (D-205), MEN ON THE MOON (D-277), and THE MACABRE READER
(D-353).

The Luck of
Ignatz
by Lester Del Rey

Terror Out of Space
by Leigh Brackett

Everyone is
familiar with the Evening Star, whose brilliant,
steady rays dominate for an hour or two the evening sky just after sunset.
Those who rise at dawn will also know the Morning Star which, at other times of
the year, heralds the rising of the sun. Modern men know that these are one and
the same vision, the planet Venus, most beautiful and brilliant of celestial
objects, by virtue of being the closest planetary neighbor to our own Earth.

For thousands of years men have marveled at
its glow and wondered at its mystery. Yet it is to be given to us, to those
fortunate to be alive in 1959 and the next decade, to learn some of the
answers. For it has already been announced as government policy that rocket
probes will begin their efforts to cross the thirty million miles of space that
separates the two worlds at their nearest approach, and inform their human
senders of what may lie beneath the veil of the Hidden Planet.

What we know of Venus is little yet
tantalizing. We know it to be by weight and size a near twin of the Earth:
7,700 miles in diameter to our 7,900. We know that on Venus a person of 100
pounds would weigh 85.

We
know it has an atmosphere and a thick one. Closer to the sun than Earth, still
its temperature on some parts of its surface should not be prohibitive to life.
And yet—no one can say what that surface is like. For Venus is covered
eternally by a thick blanket of unyielding clouds. The very length of its day
is unknown—opinions of astronomers vary from an estimate of 22 hours to one of
46
daysl
The
nature of its
surface, whether desert, ocean, or morass is totally unknown. Even the constituents
of its atmosphere are still subject to debate.

These are some of the things that only a
prober rocket can answer. That and the question of whether there is oxygen in
its air and water on its surface, without which life on Venus would be highly
unlikely. But meantime, while we are waiting for the probes to begin their hazardous
flame-driven journeys, we can project some of the possible secrets of the
Hidden Planet against the screen of the imagination. In the five adventures on
Venus included in this book there are certain to be some points that will prove
accurately prophetic. So read
The Hidden Planet
not only for the thrill of good science-fiction but also for a
"sneak preview" of things to come.

by
Chad
Oliver
I.

The cold wind swept in
from the gray Pacific, drenching Los Angeles under
sheets of driving rain. Keith Ortega, pushing his way through the uneasy
puddles of Wilshire Walk, began to regret leaving his copter at the Center. He
was dry enough in his rain-bender, but the air coming in from underneath the
force lines
was tasting
decidedly stale.

The broad walkway was deserted around him,
although he could see a few lights spilling out wetly from store windows. A
violet government
airsign
hung in the rain, glowing
gently just above his head: DON'T ROCK THE BOAT.

He turned left at the empty Santa Monica
cross and two blocks later he reached the Vandervort Tower. A flashing orange
neon sign above the ornate street doorway said: WE WANT YOUR BABY.

Keith Ortega stepped through the door and
hurriedly shut off his rain-bender. He took a deep breath of relatively fresh
air and felt much better. There was no one in the street lobby; he had already
guessed that business would be slow this afternoon. He went across to the
elevator, his feet light and awkward without the rain-benders on his shoes, and
went up to the tenth-floor interview room. Surprisingly, it was in use.

Ellen
Linford
, who looked like the epitome of
American motherhood, had another young couple on the hook. She was bouncing a
baby on her knee and smiling, and even Keith's knowledge that Ellen detested
babies failed to spoil the warmth of the scene. Ellen was a good actress. She
had to be.

Keith assumed what he trusted was a kind and
paternal expression and sat down next to Ellen. "Good afternoon, Mrs.
Linford
," he said. He beamed at the baby and chucked
it under its chin. "What have we here? How are you, little fellow?"

"It's a girl," Ellen corrected him.
She turned to the nervous couple before her. "Well, aren't we in
luckl
This
is Mr. Ortega
personally."

The
couple brightened, confronted with Fame in the flesh.

"I'd like to have you meet Mr. and Mrs.
Sturtevant," Ellen said. "They've decided to leave their little Hazel
to the Foundation. Isn't that nice?"

They hesitated. Then the woman blurted out
the inevitable question. "I still don't understand all the conditions,
sir," she said in a too-high voice. "Why couldn't we see Hazel just
once in a while? I mean . . . we wouldn't want to rock the boat or anything . .
. but just to make sure she's all right-"

"Well now, Mrs. Sturtevant," Ortega cut in, "please let
me assure you that we are in complete sympathy with your request. Your reaction
is perfectly normal for an American mother, and we're glad that you are
concerned about your child. Unfortunately, it just would not be wise for you to
see Hazel again, even for a little while."

Mrs. Sturtevant looked at her husband for
support, didn't get any, and faltered ahead on her own.
"But
why?"

Keith frowned and made precise pyramids with
his hands. "Facts are facts, my dear," he said slowly. "If you
wish to keep
Hazel, that
is certainly your privilege.
You have come to the Foundation of your own free will, and you surely have
investigated us enough to learn that we are an absolutely reliable concern. We
believe that children entrusted to our care are entitled to a life of their
own, and we have found that repeated contacts with the original parents just
make it tough on the child. Now then, you want Hazel to lead a full, normal,
happy life, don't you?"

"Of course we do," the husband
said. Plainly,
he
didn't care what happened to little Hazel.

Keith smiled. "Then you must trust
us," he said. "You can't have it both ways. I give you my personal
word that Hazel will be in good hands with the Foundation. If you have any
doubts, I suggest that you go back home with your child and talk it over some
more. The decision is yours to make."

"Splendid!" Ortega said. He shook
hands again. "You just sign the papers with Mrs.
Linford
,
and that's all there is to it. I'll look in on Hazel from time to time myself,
so please don't worry about her." He looked at his watch, although he knew
perfectly well what time it was. "I'm afraid I must be going. Good luck to
you!"

He hurried out of the interview room to the
elevator, leaving Ellen to finish things up. He couldn't take the last
farewells to the child; they gave him the creeps. If the parents loved their
children so much, why did they give them to the Foundation?

The elevator whisked him up to the fifteenth
floor.

Outside,
the cold rain dropped from the sky and ran in rivers down the sides of the
Vandervort Tower.

Keith Ortega checked in at his
office, a pleasant sanctum lined with shelves of books and a clinging memory of
blue tobacco smoke, and the first thing he saw was the red light blinking over
the tri-
di
.

My Family and Other Superheroes by Jonathan Edwards
Not Just Another Romance Novel by Lisa Suzanne
Adam Gould by Julia O'Faolain
The Art Dealer by West, Megan
Poisoned (The Alex Harris Mystery Series) by Macko, Elaine
Whispers by Robin Jones Gunn
Simmer Down by Jessica Conant-Park, Susan Conant
Nothing But Fear by Knud Romer
You Are Dead by Peter James
Women of the Otherworld 09.5 - Angelic by Kelley Armstrong