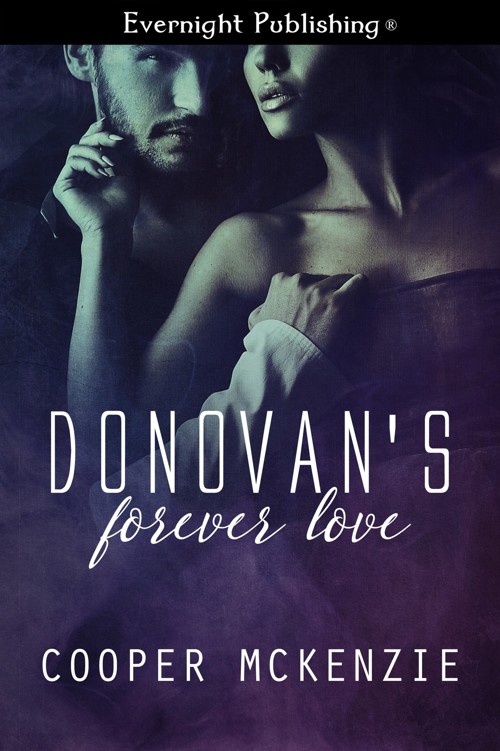 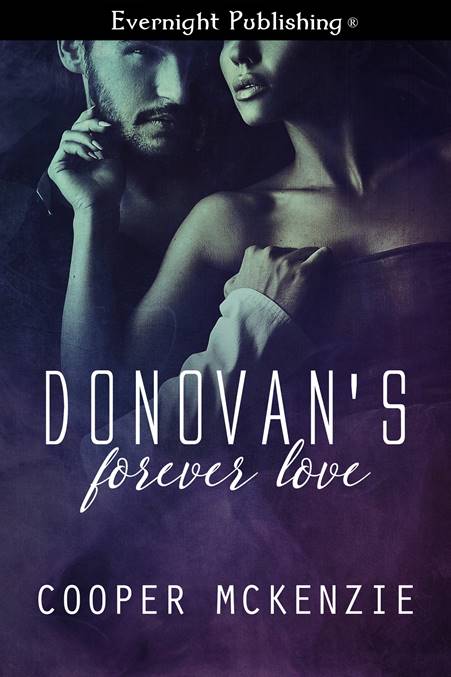 WARNING: The unauthorized reproduction or
distribution of this copyrighted work is illegal.

This is a work of fiction. All names, characters,
and places are fictitious. Any resemblance to actual events, locales,
organizations, or persons, living or dead, is entirely coincidental.

In loving memory of Joan, the second person
to fall in love with Donovan.

I looked around, but no one else seemed to
notice him. No one else seemed to care that a five-hundred-year old vampire had
just walked into the restaurant. I alone knew of his extensive past, but I could
not share the news that an undead had just walked in the bar because then
questions would be raised that I could never answer.

“Jayne, can you make the rounds with the
decaf? I’ll take the regular,” Ellie, one of the other waitresses working
tonight said, handing me a pot of coffee.

“Sure.” I accepted the pot and followed her
around the dining room. I smiled and poured until we passed his table. He
looked up, his expression blank as he nodded in response to Ellie’s greeting. He
ordered a glass of the house burgundy wine without even looking at the menu. Had
he been here before? Surely I would have seen him, would have recognized him.

As I followed Ellie to the next table, he glanced
my way, then took a second look.

“I know you.” His words were not a question,
but a statement of fact as his large hand grabbed my left elbow. Fortunately,
the coffee pot was in my right hand or one of us would have been wearing the
hot, dark brew. The coolness of his touch melted through my white imitation
silk shirt and woke my sleeping libido. It also brought forth memories of
another time and place. A time and place when I had been another woman. Another
lifetime when I had lived, and loved this man.

I did know him, though not in this lifetime. I
knew who he was and what he was, though I did not know what name he was going
by these days. I could see he was flipping through his memories, trying to
place me, though he would undoubtedly have trouble with that. We did have a
connection, but I would not acknowledge it here. The explanation was not one
for public consumption. It was too bizarre. My family had not believed it when
I began having the dreams as a teenager, so I doubted strangers would react any
better.

Up close, he was even more gorgeous than in
my dreams, though he was pale in a town where tanned golfers and boaters were
the norm. And he still had those blue eyes that had haunted Charlotte’s dreams
until her death. After two years of celibacy following a short, passionless
marriage, I knew I would gladly jump into the nearest bed if only he would say
the word.

Then his expression cleared. “Charlotte. Charlotte
Bowen. Charlotte Harper. But how?” His grip on my arm eased somewhat, but he
still did not release me.

I knew from a few pictures I had seen of my
great grandmother that I resembled Charlotte, but this man and his strong reaction
made me wonder how close that resemblance really was.

I did not fight for my freedom. The encounter
was too intriguing to end now. Charlotte Bowen Harper had been my great
grandmother and though I had never met the woman, I knew everything about her. Including
the fact that this man, known to her as Richard Donovan, had during the 1920s,
been the lover she had never gotten over or forgotten, even though she had
married another man. Though my family had tossed around the age old joke about
inbreeding, the detailed stories I told of her life that I should never know convinced
them that I was my own great grandmother.

“My name is Jayne,” I said, pulling my arm
from his now lax grip. He did not try to stop me, though his expression was one
of intrigue, attraction and remembrance.

I walked away, fighting an urge to go back
and crawl into the man’s clothes while begging him to fuck me as he had
Charlotte. I had an unusual, intense need to make him mine right here, right
now, in the middle of a dining room and damn the consequences.

“I’m taking a break,” I told Ellie as I set
the coffee pot back on the warmer.

“Uh-huh,” she said. She was too busy flirting
with the new busboy to argue.

I stepped through the kitchen and out the
back door. The night was hot, humid and typical for late fall. As I paced the
alley behind the restaurant, I tried not to let memories of Charlotte’s time
with Richard Donovan overwhelm me. I was still in my thirty-day probationary
period and I needed the money this job paid, though I had come to the conclusion
about two days in that I really was not meant to be a waitress. My problem was
that at age twenty-eight and after holding almost a hundred jobs since
graduating high school, I still did not know what I wanted to be when I grew
up. Finally, I was settled enough to go back inside and finish the shift.

“Jayne, that gorgeous guy in the corner booth
is asking for you,” Ellie handed me the leather folder with his check. I
glanced inside and noticed that, as I remembered from Charlotte’s memories, he
had not eaten, just enjoyed the glass of wine.

I crossed the room, feeling my hormones
gathering steam and sending my body into lusty overdrive with each step. “Yes,
sir?” I stopped beside his table and laid down the folder.

“I’d like you to come to a party I’m hosting
tomorrow night. It’s a costume party at Tryon Palace. A fundraiser for several
charities here in town,” he said. “Here’s a ticket and invitation.” He handed
me an oversized linen envelope with my first name written in a neat hand across
the front.

“Why?” I couldn’t help myself.

“There’s a pull between us I’ve only felt one
other time in my life. I’d like to explore it further.” His eyes flashed a heat
and sexual hunger that I recognized from Charlotte’s memories. So, he could
feel the connection as well.

He nodded with a smile as he took my hand and
looked at the palm. “That’s all I can ask. But I do want you to know that I
have never forgotten Charlotte and the time we spent together. She was a very
special woman.” He looked in my eyes again and his eyes were glowing with blue
fire.

I had to swallow hard before I could speak. “Have
a good evening, sir.”

“Donovan. My name is Donovan Richards.” He
tucked a twenty-dollar bill into the folder then slid from the booth. He
touched my shoulder as he passed me on his way to the door. “I’ll see you
tomorrow evening.”

I shivered at the deep, deep pitch of his
voice as it stroked over me like a warm fleece. My cunt leaked hot sex juice
into my panties. My sudden intense hunger for this man made it nearly
impossible for me to return to work. What I really wanted to do was follow
Donovan Richards and drag him into the nearest dark alley where I would
introduce myself in the most carnal way possible. Unfortunately, the rent was
due and I needed tonight’s tips to finish paying it.

His final touch and sizzling look still
affected me hours later when I got home from work. After a long shower, I dried
and headed straight to bed. I didn’t bother with the cotton panties or the
oversized t-shirt I usually slept in. I was exhausted, but my body was still
wired too tight for sleep. Instead of trying, I rolled onto my stomach and
spread my legs. My right hand went to my crotch and separated the still puffy
lips of my labia. Two fingers slipped in and began to caress my slick,
sensitive clit. My left hand slid under my chest and palmed the pebble hard
nipple that topped my breast.

Then, as now, the man could turn her on just
by looking in her direction.

On their second date, Charlotte had found
herself naked and sprawled across his king-size bed. She was boneless and truly
satiated for the first time in her life. From then on, she and Richard had been
inseparable. At least at night. He would pick her up one hour after sundown and
they would drink and dance and party before returning to his apartment where he
took her in every way imaginable until two hours before sunrise when the
grandfather clock would ring out and he would escort her home.

Even then, I didn’t stop my self-satisfying
sex play. I couldn’t.

Knowing I would see him again in hours and wondering
if the sex between us would be as hot as it had been eight decades before, my
fingers left my clit and plunged deep into my burning hot cunt. A second and
then a third orgasm rocked through me in short order. Reliving Charlotte’s
sexploits with the tall, dark man I know understood was a vampire always had
this effect on me. I dug deep into my memories and could remember his cool
touch in the middle of summer, the smell of spice and man that clung to
Charlotte long after they had departed after sex, even the way he bit his lip
as he tried to hold back his release. After the fourth orgasm rocketed through
me, I finally felt the knot of sexual tension in my pelvis loosen.

Once I’d finally calmed enough to sleep, I
smiled as I climbed from bed and went back to the bathroom to clean up. I was
going to the party of the year tomorrow night. As I washed and dried and padded
back to bed, I tried to think of a costume I could put together that wouldn’t
cost any money. As I curled up and pulled the blanket over me, a thought
flashed through my mind. At once, I knew exactly what I would be for Halloween.
I just hoped the dress was still wearable.