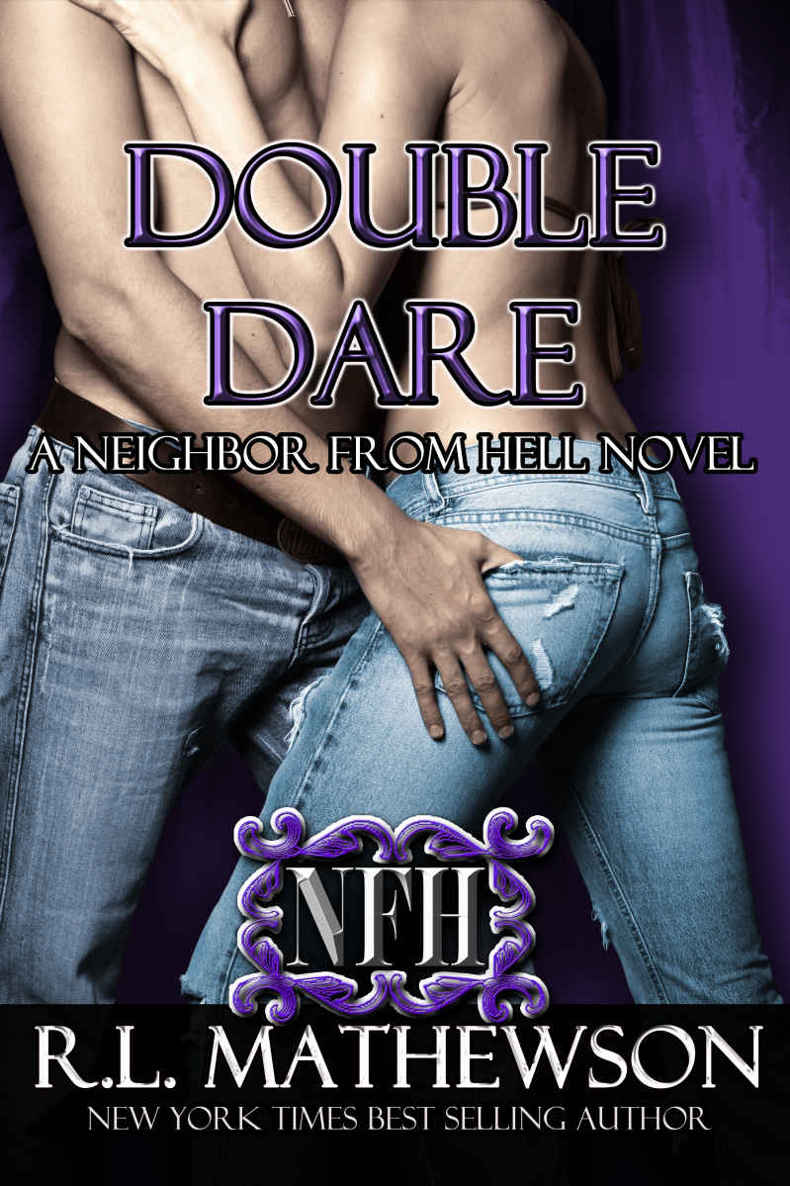 Other titles by R.L. Mathewson
:

The Neighbor from Hell Series:

Truce: The Historic Neighbor from Hell

The Neighbor from Hell Collection I

How to Write, Publish and All That Good Stuff…

This is a work of fiction. All of the characters, organizations and events described in this novel are either products of the author's imagination or are used fictitiously.

This book like every book that I have ever written or will ever write is dedicated to my children, Kayley and Shane, who have been with me on this journey from day one.

A Sneak Peek at a Neighbor from Hell Novel

Thank you for purchasing this book.

Sign up for my newsletter and receive the latest news about the Neighbor from Hell Series as well as my other series at:

I would like to say a special thank you to several people who have been there for me, supported me and who have always believed in me.

To Lieve and Jen Emig for being there for me during one of the most difficult times in my life. Your kindness helped me more than I could ever say. You helped me pick myself up and dust myself off and keep going. For that you will forever have my gratitude.

For Rhonda Valverdeand the wonderful ladies at VRB for giving me my start and taking a chance on me. Your support and kindness made me believe in myself and realize what I was capable of. Thank yo
u


Maryse Black for the incredible review and kindness you showed me. You have no idea what a difference you’ve made to me and my children. You will forever be in our thoughts.

To the teachers, staff and volunteers at my children’s school, thank you for everything that you have done for Kayley and Shane. Your dedication and kindness over the last three years has made a world of difference to my children. You’ve helped them grow, smile and realize that there are wonderful people in this world.

Before we talk about this book, I would like to take this opportunity to thank everyone for their support and kind emails, posts and reviews over the last few years. They’ve meant a great deal to me and my children.

Now, onto to Double Dare….

When the idea for this book first came to me, I never planned for it to coincide with The Game Plan. I’d planned on writing about two childhood best friends who lived to torment each other, but I realized early on that the books would have to coincide. I’d hoped to write this book so that it could be read and enjoyed as a stand-alone book even though it was part of a series. Unfortunately, no matter what I did I couldn’t get away from the fact that this book does in fact compliment The Game Plan.

With that being said, even though this book does compliment The Game Plan, I refused to make this story into a different POV of The Game Plan. You will see a few shared scenes with The Game Plan, but those scenes were re-written with a different POV as well as a completely different focus so that you should be able to read them without the repetitiveness that sometimes comes with books with shared events.

I also made the decision to end this book before Danny’s traumatic event from The Game Plan, because I didn’t think anyone would enjoy forty pages of repetitiveness and I didn’t want to switch the focus to Danny and Jodi since they’ve already had their story and Darrin and Marybeth deserved a story of their own.

Thank you and I hope you enjoy Darrin and Marybeth’s story as much as I enjoyed writing it.

“Stop staring at me!”

“No,” the little boy, who’d been staring at her ever since her mother had put her in time out twenty minutes ago, said with a careless shrug.

With an annoyed sigh, she decided to ignore him, hoping that he would take the hint and go away so that she could sit there glaring at her brother in peace as he made a big show out of eating the ice cream that their mother had given him. Jake smiled as he took another big bite out of his ice cream sandwich. Marybeth narrowed her eyes on her older brother before she shifted her gaze away, refusing to give her brother the satisfaction of seeing her upset.

“He had it coming,” the boy said, drawing her attention back up to find him still perched on the branch above her head.

The boy looked thoughtful before he added, “He cries like a girl.”

“Do you want me to beat him up for you?” he offered as he leaned back against the tree.

For a minute she considered saying yes, but after a slight pause she shook her head with a sigh. “No, that’s okay,” she said, already knowing that she’d get her brother back later for telling on her.

“You don’t look like your mom,” he pointed out with a curious smirk as he shifted his gaze to her mother who was still unpacking their car.

She sighed heavily as she lay back on the overgrown grass and waited for the question that would probably have her reaching for the stick next to her and throwing it at his head. He’d want to know if she’d been adopted and when she told him no he’d probably argue with her like most kids did, pointing out the fact that her mother had pale skin, blonde hair and gray eyes while she had black hair, a dark tan and green eyes. She could tell him that she looked like her father, but she wouldn’t do that, because it would only lead to more questions, questions that she didn’t feel like answering.

“You’re prettier,” he announced, making her realize that he was staring down at her once again.

“You’re a bad liar,” she said, blindly reaching out and grabbing the stick so that she could focus on peeling bark off it instead of how much his words had pleased her.

“Why do you think I’m lying?” he asked, sounding curious.

With a sigh, she gestured towards her mother who was talking to the movers. “Because everyone says she’s beautiful.”

“So?” he asked with a frown. “That doesn’t mean that she’s prettier than you.”

“I’m not supposed to talk to you,” she admitted with a sigh, because she actually liked talking to him.

“I know,” he said with a huge grin. “I heard your mother when she told you to stay away from us.”

“Sorry about that,” she said with a shrug, not knowing what else to say.

“The pizza delivery guy forgot my dad’s meatball sandwich,” he said, matching her shrug with one of his own as if that explained the terrifying scene that had met them when they’d pulled into the driveway a few hours ago. It probably wouldn’t have been so bad if the movers hadn’t been forced to intervene and the cops hadn’t showed up.

“If you already know that I’m not allowed to talk to you then why are you here?” she asked, wondering how much longer it would be before her mother remembered that she was still in time out.

Probably not for a while, she thought with a sigh.

“Because I called dibs,” he said with a shrug as he shifted on the large branch until he was lying on his stomach on the branch above her.

“On you,” he said around a loud yawn, confusing her a little bit.

“I’m going to marry you,” he announced, sounding bored as he drew her attention back to find him hanging upside down by his legs as he continued to watch her.

“I can’t marry you,” she said, frowning even as she wondered if he’d be willing to teach her how to do that without falling on her head.

“Why not?’ he asked with a frown of his own.

“Because I don’t even know your name,” she pointed out even though it should have been more than obvious.

He laughed at that. “I’m Darrin and you’re Marybeth,” he said before she could tell him.

She considered asking him how he knew her name, but then realized that he’d probably heard her mother when she’d been yelling at her earlier. She glanced back over at her mother and brother before she looked back up at Darrin. She worried her bottom lip, not sure if she should ask, but…….

She had to know.

“You didn’t call dibs on my mother?”

He squished his face up in disgust. “No!”

“What about your brothers?”

He snorted at that. “No, but I had to give Reese my dessert so that I could keep you.”

“Oh,” she said, because she’d never met anyone that had a twin before.

“Seven,” she said, returning her attention back to her stick.

“You don’t look seven,” she said, not bothering to look up from her stick.

Pursing her lips up in thought, she looked up at him, trying to decide if he was lying or not. He said that he was seven, but he looked more like he was ten. He was too big to be seven, she decided as she considered him. She really liked his short black hair and the way that his green eyes twinkled when he smiled. He was also handsome, she decided, not really knowing why that mattered, but it did.

“Are you sure?” she asked, returning her attention back to her stick.

“Yes,” she said, stripping a piece of bark off her stick and flicking it away.

“I can’t. Besides, I’m going to get in trouble if she catches me talking to you,” she explained, risking another glance to the right to see what her brother was doing. He was done with his ice cream and was now playing with his army soldiers on the front lawn.

“Do you want to come over to my house and play?” he asked, drawing her attention back to the tree just as he started to climb down.

“I can’t,” she said, sighing miserably.

“Because I’ll get in trouble.”

“You’re already in trouble,” he pointed out.

He did have a point, but…

He was quiet for a minute before he asked, “What if I dared you?”

“Fine,” he said, smiling hugely. “What if I double dared you?”

Glaring, she slowly got to her feet with a nod and accepted his hand when he held it out to her, because she didn’t have a choice.

He’d double dared her after all.

PUCKED Up by Helena Hunting
Tinker Bell and the Lost Treasure by Disney Digital Books
To Dream Again by Laura Lee Guhrke
Scavenger by David Morrell
Wag the Dog by Larry Beinhart
Avenge by Sarah M. Ross
Bang by Ruby McNally
The Rangers Are Coming by Phil Walker
A Lady's Wish by Katharine Ashe
Arsènal by Alex Fynn