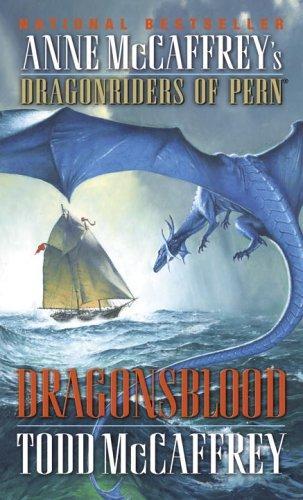 SUMMARY:
In Dragon’s Kin, bestselling author Anne McCaffrey did the unthinkable: for the first time ever, she invited another writer to join her in the skies of her most famous fictional creation. That writer was her son, Todd McCaffrey. Together, they penned a triumphant new chapter in the annals of the extraordinarily popular Dragonriders of Pern. Now, for the first time, Todd McCaffrey flies alone. And Dragonsblood is proof that the future of Pern is in good hands. After all, dragons are in his blood. . . .Never in the dramatic history of Pern has there been a more dire emergency than that which faces the young dragonrider Lorana. A mysterious fatal illness is striking dragons. The epidemic is spreading like wildfire . . . and the next deadly cycle of Threadfall is only days away. Somehow, Lorana must find a cure before the dragons–including her own beloved Arith–succumb to the sickness, leaving Pern undefended.The lyrics of an all-but-forgotten song seem to point toward an answer from nearly five hundred years in the past, when Kitti Ping and her daughter Wind Blossom bred the first dragons from their smaller cousins, the fire-lizards. No doubt the first colonists possessed the advanced technology to find the cure for which Lorana seeks, but over the centuries, that knowledge has been lost.Or has it?For in the distant past, an aged Wind Blossom worries that the germs that affect the fire-lizards may one day turn on larger prey–and unleash a plague that will destroy the dragons, Pern’s only defenders against Thread. But as her people struggle to survive, Wind Blossom has neither the time nor the resources to expend on a future that may never arrive–until suddenly she uncovers evidence that her worst fears will come true.Now two brave women, separated by hundreds of years but joined by bonds transcending time, will become unknowing allies in a desperate race against sickness and Threadfall, with nothing less than the survival of all life on Pern at stake.From the Hardcover edition.
DRAGONSBLOOD

When Shelly Shapiro, our Del Rey editor, asked me to write this intro, I

hemmed and hawed because, let’s face it, I’m compromised on several

counts. One, it is my world Todd is writing in; and two, he is my son.

However, he comes from quite an authorial background. His

great-grandfather was a printer-engraver. His grandfather, Colonel George

Herbert McCaffrey, wrote many reports to the government dealing with the

occupation of countries; his uncle, Hugh McCaffrey, wrote about his

Books in 1988. His grandmother dabbled in writing murder mysteries, but

with three kids to raise and my father to contend with, she never went as far

as writing them down. And then there’s me, his mother, and him growing up

while I was writing the Pern series, which I’ve been doing since 1967.

They do say that teenagers are very impressionable. And as he was born in

1956, he was certainly immersed in the Pern experience at exactly the

most tender time. Grown up, he has helped me work my way through

scenes. He has put his military experience (he was in the U.S. Army), his

flying experience (he holds a private pilot’s license), and his knowledge of

advising me and sometimes even contributing whole scenes to books like

editors realizing his maternal connection! And he collaborated with me to

gratifying and fun for both of us!

So he is well qualified to write this book. He is also a damned good writer,

as
Dragonsblood
will confirm. Perish forbid you should take my word for

his abilities. But you should.

You see, I’ve always been paranoid about people writing in my world. If

you’d seen some of the lovingly but inaccurately written stories I’ve seen,

including a film script that had me cringing in fear that it would be produced,

you’d understand how I feel about having my literary child misrepresented.

But Todd was in at the beginning, and he
knows
Pern as well as he knows

education, he
knows
his computer!). And I knew he could write well. So I

knew—well, to be honest, I
hoped
—that he was right for Pern.

Todd’s insight into the world and its culture is well-nigh perfectly Pernese.

He also had some of my strongest and most reliable Pern fans, like Marilyn

and Harry Alm, go over the manuscript, so it isn’t just Momma encouraging

her child. They were harder on him than I ever could have been. Not that I

didn’t watch him closely! I couldn’t let him make mistakes, and we did have

a couple of arguments about scenes, but I am happy to admit that

Dragonsblood
is a good yarn, fitting perfectly into the Pern series, yet

something I don’t think I would have thought up myself.

Enjoy, as I did, another point of view about Pern. And thanks, son, you done

did good and me proud!

Fort Weyr, at the end of the Second Interval,

Four men stood in a knot around the Star Stones of Fort Weyr. The sun

was just above the horizon, casting the harsh shadows of early dawn at

Their warm wher-hide jackets proclaimed them the leaders of Benden, Fort,

K’lior, Fort’s Weyrleader, was host and the youngest present. He was also

the newest Weyrleader, having gained his position less than a Turn before.

He glanced back to the Star Stones—to the Eye Rock, which bracketed the

Finger Rock, which itself was lit by the baleful Red Star. Thread was

“Fort is still wing light. We’ve only had the one clutch—”

the Red Star and the Eye Rock. “Thread won’t fall until after the last frost.”

“There’s no doubt, then, that Thread is coming,” K’lior said, wishing the

other Weyrleaders would disagree with him.

For over two hundred Turns, the planet of Pern had been free of the threat

When You Are Mine by Kennedy Ryan
Big Brother Billionaire (Part Two) by Ray, Lexie
KBL by John Weisman
Escape from the Drooling Octopod! by Robert West
The Saint Goes On by Leslie Charteris
Annabel's Starring Role by Holly Webb
Tanys Gladiatrix (The Chronicles of Tanys Book 2) by Andrew Hunter
The Curious Tale of the Lady Caraboo by Catherine Johnson
The Trouble with Fate by Leigh Evans
Dean's Delight: The Principal of Pleasure Book Two: A Steamy Romantic Novella by Aria Blue