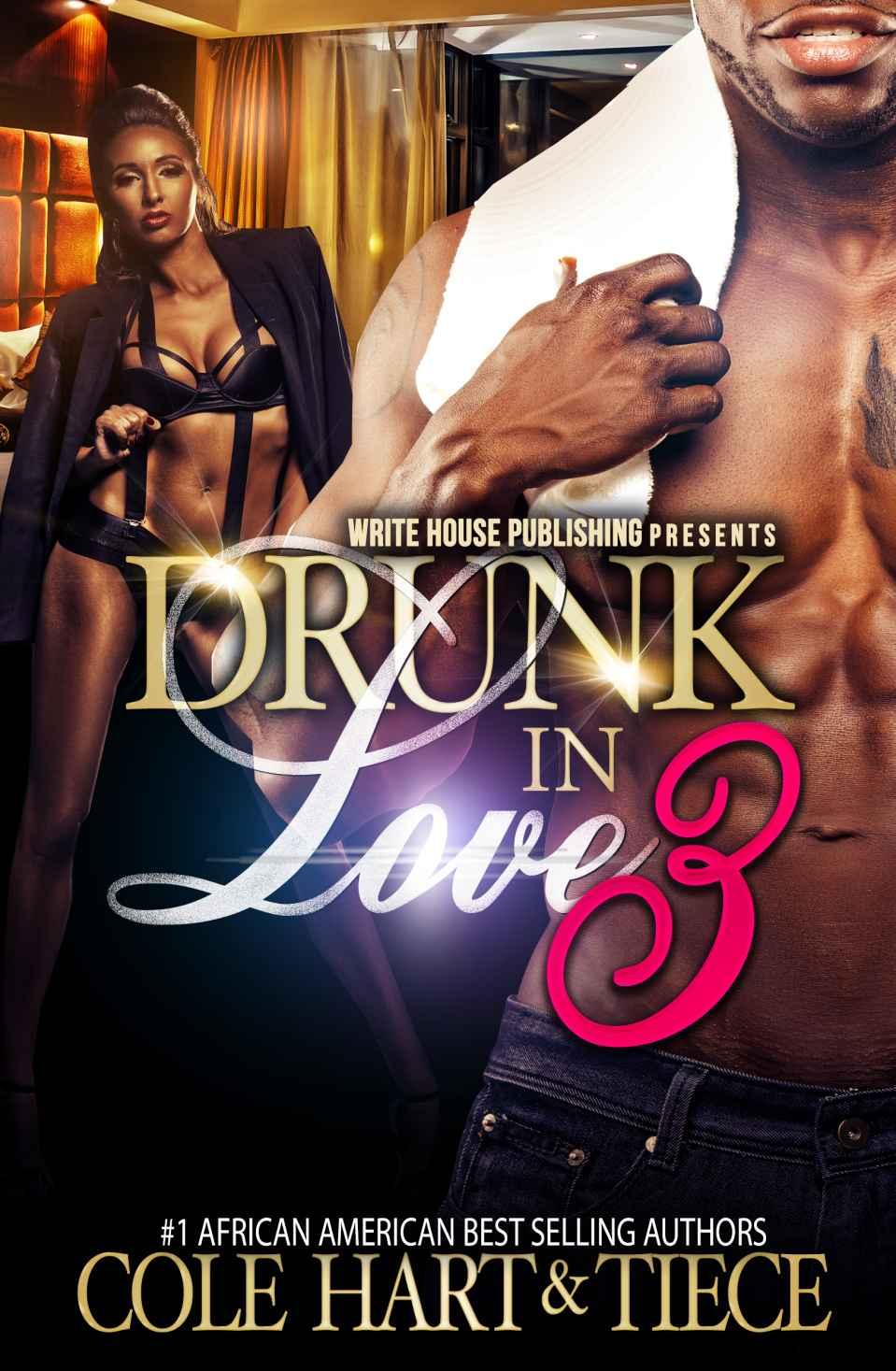 Mark's menacing eyes were stretched wide, looking like a mad man. The gun gripped tightly in his hand had his heart thumping heavily inside his chest. The barrel of the gun was still smoking as the loud yells from the people in the background awakened his thoughts of what he’d just done. He glanced at his surroundings; feeling lost, confused, and betrayed by the woman who he’d thought was true to him. She’d broken his heart more than she knew. He wanted to hurt her like she’d hurt him and from what he could tell, he’d done exactly that.

He looked down to see Olivia and Zay on the ground. Zay was more so covering her with his limp body, but neither was moving. Mark still had the gun raised in his hand, standing there like he was frozen in time. Dillon frantically stood close by not knowing what he was about to do next. Mark seemed stuck in a trance and as the adrenaline pumped anxiously through Dillon’s veins, he quickly ran over and kicked the gun out of Mark’s hand. He wasn’t about to let anyone kill his brother if he could help it.

Mark snapped out of the daze that he was caught up in once feeling the swift, hard kick from Dillon’s shoe to his hand. He was still stunned, standing there looking very psychotic. Dillon took this as a chance to sucker punch him in the face, causing him to stumble backwards. Mark didn’t attempt to fight him, because once he’d gotten his balance back he took off running to his car. In his mind, he could already hear the sirens from afar and he knew that they were coming to get him. In a matter of seconds, he had quickly fled the scene. There was no way in hell that he was going down like that.

Dillon immediately ran over to his brother. He felt helpless as he turned him over on his back. “Zay! ZAY!” He shouted out, anxiously shaking him in hopes that he’d open his eyes. “ZAY!” Blood was everywhere on Olivia’s clothes and Zay’s. He couldn’t tell who was hit and where. He scanned over Olivia quickly as she lay there not moving. He shook her lifeless body with one hand while trying to feel a pulse on his brother with the other hand. “Olivia, wake up!” He called out, but Olivia still didn’t move. Dillon’s mind was in overdrive as a few people started coming over. Some were still calling the police and a couple of others were now trying to help him.

“Are they okay?” One person asked.

Another bystander stood there with her hand over her chest. “Who would do something like this?” She pondered.

All of a sudden Olivia began to blink her eyes a little. She could hear Dillon in the background about to lose it as he lay over his brother almost in tears. For a brief second, she couldn’t move. Dillon glanced over from his brother back to her once noticing that her hand had moved.

A bouncer that was leaning down beside them was already checking Olivia as he searched her over.

“My God, what happened?” She asked just above a whisper. She was still dazed and looking around like she was delusional. A cut was on the side of her temple, indicating that she’d hit her head pretty hard once falling to the ground. This in turn knocked her out cold. Zay, on the other hand, had taken one of the bullets and was the only one hit during the two shots that were fired.

“Has she been hit?!” Dillon questioned the bouncer again, looking from Zay then back over to Olivia.

“No,” the man said. “I believe she just hit her head on the concrete.”

Dillon felt better about her, but searched his brother quickly, noticing that the blood was coming from the gunshot wound that had hit him in the left side of his abdomen.

“Oh my God!” Olivia let out as she noticed Zay just laying there.

“Calm down.” The man said, trying to ease her nerves.

“What the hell happened?” She questioned, feeling bewildered and on edge as she tried to come to Zay’s aid.

The sirens started getting closer and closer just as Zay opened his eyes, looking around. Dillon immediately stopped him from moving. “Hold still,” he told him. He lifted up Zay’s shirt so he could get a clearer look at the small wound oozing blood from it. Zay tried to look down at himself, feeling the heat from the bullet that could’ve very well have taken his life. “Hold still, bro. I got you.” Dillon applied pressure on Zay’s wound in hopes of stopping him from losing so much blood. He looked around the buzzing crowd as people pitifully stared and whispered. They were in just as much shock as they were that this had happened.

Dillon was getting frustrated just sitting there. “Where’s the fucking ambulance?!” he yelled out.

“I called 911,” a slim, dark-skinned female said. She raised her iPhone as if to verify her claim.

“I did too,” another voice sang.

The bouncer looked over at him. “My partner called too, man. They’re coming. It sounds like they’re nearby.” Sure enough not long after he said that, the police and the ambulance pulled up into the parking lot of the club.

Olivia was hysterical just seeing the ambulance pull up. “Oh my God!” she screamed out. Her heart was racing ninety miles per second. She never in a million years thought that Mark would do nothing as stupid as this. She leaned over Zay, seeing the blood soaking his shirt almost caused her to have a panic attack. “I'm sorry this happened,” was all she could muster up. “I’m so sorry.” She cried.

Dillon looked over at Olivia. “Yeah, it’s okay. Just calm down,” he said. “He’ll be alright.”

“Help is here,” Olivia whispered in his ear then she tenderly kissed him on his lips. Zay winked an eye and forced a warm smile her way then reached his hand out to hold hers. She was still sobbing and breathing heavily, but was glad to see that he wasn’t blaming her for anything.

A tall, slim, white guy with a bald head jumped out of the ambulance along with a black guy who was short and stumpy. The short guy looked around to see the people chattering and pointing to Zay who was still on the ground. The two police had gotten out of their vehicles and instantly started asking questions to the people that saw what happened. The bystanders backed away to let the EMT guys handle the situation as they waltzed in and put Zay on a gurney. Finally, they had him in the back of the ambulance and were ready to pull out.

“You ride with him.” Dillon said. “I’ll be following closely. Let me just speak with the police. Don’t worry, I’ll handle this.”

“Are you sure?” Olivia asked, not wanting to burden him no more than she’d already had.

“I’m positive. My brother needs you.” Dillon assured her. “We’ll just have to come back to get your car.” Olivia nodded her head and climbed up in the back of the ambulance to take the ride with Zay to the hospital.

Once inside the ambulance, the EMT questioned her quickly. “Who are you to him?”

Olivia wiped the falling tears away from her face with the back of her hand, desperately trying to suck it up and get herself together. She sniffled and finally said, “I'm his, his girlfriend.”

The guy nodded his head with approval then focused his attention back on Zay. He was moving rapidly with a professional consistency to help Zay in whatever way he could as Olivia just held on to his hand for emotional support. The guy placed an oxygen mask over his face and stuck him in the arm with a quick IV needle.

Meanwhile, Dillon watched the ambulance disappear out of the parking lot. He had tears in his eyes, but he wouldn’t let them fall. In his mind, he just prayed that his brother would be okay.

“Hey, excuse me.” One of the officers called out as he walked over Dillon’s way. “Can you tell me more about the situation that occurred here tonight?” He asked, noticing the blood on Dillon’s clothes and hands.

Dillon paused, making sure to say the right things. “All I know is that this man got out of his car and ran up to us, seemingly upset and irritated already. He started asking for our money. After some words were exchanged, he just shot his gun twice and unfortunately, one of the bullets hit my brother. I believe he just thought we had money on us, because my brother was driving this car.”He said glancing back at the burgundy Bentley. “I don’t know.” He added as if he was a bit confused himself.

The cop was jotting down what he’d heard on his notepad then looked back up at Dillon. “So the guy shot is your brother?”

“Did you see what kind of car the man was driving, because I’ve gotten like three different types of vehicles so far?”

“No sir,” Dillon responded. “As you can see, the street lights are out in this part of the parking lot. Plus, I wasn’t trying to see his car. I was rushing to my brother’s side.” He explained, feeling anxious to leave to check on Zay. “If you don’t mind sir, I’d like to get to the hospital to be with him. Honestly, that is all the information that I know, though.”

“Okay, that’s fine. An officer will come to the hospital to speak with you there.”

“Thanks,” Dillon said. As he opened up the door on the Bentley to get inside, Zoe’s white Lexus cornered the parking lot. She pulled right up beside Dillon, noticing the police lights and the people standing outside of the club looking frantic. Dillon just stood there clueless for a second, already knowing her car the minute he saw it.

She got out of the car and looked at him strangely. “What are you doing here?” She questioned, being that the last time that she’d seen him, he’d walked out on her.

“What are you doing here? I thought you were in Atlanta.” He questioned back while trying to act hard, but really he was totally caught off guard by her presence.

“I was.” She commented also trying to act like she didn’t care to see him, but deep down she wanted nothing more than to run over and hug him. “I thought you were in Atlanta, too.”

“Well,” he said about to explain why he’d come to Augusta with his brother, but she cut him off.

“What happened, here?” She questioned, looking at the police who hadn’t yet walked off. “I was meeting my sister. Where is she? Was this a set up or something?” She curiously asked, looking back over at Dillon. She knew that Olivia would try to play matchmaker in a minute.

“There has been a shooting here tonight.” The police cut in and told her.

Zoe instantly frowned as she inquiringly pondered, “A shooting?”

Dillon just shook his head at her. He really didn’t want to talk around the police. “Just leave your car parked here and ride with me. I’ll bring you back to pick it up.” He said.

“What happened? Where is my sister?” Zoe asked, trying not to panic. It was a little darker in the area that they were parked in, but finally she’d started paying more closely attention to Dillon as he stood there. “Is that blood on you?” She nervously questioned.