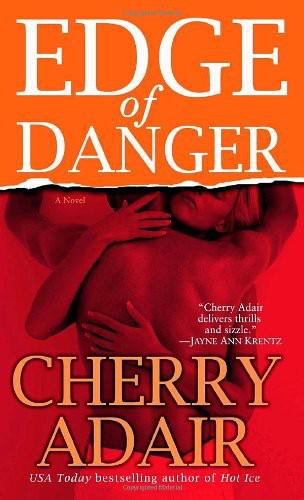 “I don’t give a damn if it’s a matter of national security or not,” Gabriel Edge savagely told the man he held at sword point. “I am
not
having sex with that woman.”

The two men could have been sword fighting in medieval Scotland instead of twenty-first-century Montana. But both the castle and the heavy claymores the two T-FLAC operatives so expertly wielded were the real deal.

For several minutes the only sounds in the Great Hall were their breathing, the clash of ancient steel, and the soft sibilant shush of bare feet on stone. Swordplay was a well-choreographed dance, and they knew how to keep it interesting.

Their blades slid against each other ritually as the men circled each other, feinting, testing for weakness, waiting for a split-second opening. Slightly better conditioned for a sport that required both strength and dexterity, Gabriel intentionally moved off balance to fool his opponent. Then, keeping his swift curse mental instead of verbal, sidestepped Sebastian Tremayne’s lightning-fast return thrust.

Pleased with himself, Sebastian shot him a triumphant glance. “Your country nee—”

“Same tune.” From a high guard Gabriel made a strong downward cut, the blade of his broadsword flashing silver in the early morning sunlight streaming through the high arched windows. He moved with a feline grace and speed that had Sebastian backing up. Fast.

The first time Gabriel had set eyes on Dr. Eden Cahill he’d felt this same cold clench in his gut. It was getting worse.

“I’ll find another way,” he assured his friend grimly. And he would. As soon as he damn well came up with something that would work just as quickly, and just as well, as having sex with her.

Sebastian almost took off Gabriel’s hand because he was so distracted. He’d taught his friend well. “Good one.” He brought his attention back to the task at hand. Cutting back on the inhale, he halted his own strike an inch from his friend’s heart. Again. “You’re dead,” he said with satisfaction.

They straightened and parted, each pausing to wipe the sweat from their eyes with their forearms. They were in hour two of practicing cuts and strikes. They’d stop soon. But not yet.

“Ready?” Gabriel asked after a few moments’ rest, replacing both hands on the leather hilt of his sword.

Agile and fast on his feet, Gabriel circled. The longer they practiced, the heavier the claymore seemed to become. That ten pounds felt more like fifty after wielding it for an hour. A good workout. Both for his body and his mind.

“Been at it longer than you,” he pointed out, reading the familiar I’m-going-to-beat-the-shit-out-of-you-this-time glimmer in his friend’s eyes. They watched each other like hawks, slowly circling each other.

From a hanging guard, Sebastian brought down a strong diagonal thrust. “Faster on my feet than you.”

Knuckles white, Gabriel blocked. “You’ll have to be.”

Tremayne was a little out of breath, Gabriel noticed with satisfaction. They were evenly matched; he was just better at hiding his uneven breathing than his friend was.

Buttery light streamed through the leaded glass windows embedded in the thirteen-foot-deep walls. The Great Hall was constructed of rough-hewn stone the color of a good wine cork, and hung with enormous, priceless, centuries-old tapestries, coats of armor, ancient weaponry, and other
objets d’art.

One of Gabriel’s distant ancestors had built the castle in the Scottish Highlands for his young bride, Janet, in the first part of the fourteenth century. Hadn’t worked out too well for
him,
but Gabriel wanted to live in the castle that had housed seven hundred years of the Edridge family. They might no longer use the old Scottish name, but the castle would always be home.

A man with his abilities could always get what he wanted.

As a boy he’d wanted the castle, and he’d gotten it. Using his wizard skills, he’d teleported his ancestral home stone by bloody stone until it stood, stark and proud, hundreds of miles from civilization. Somewhere inside that foolish boy had lived the naive hope that, with the ancestral home in Montana, his father would venture from his native Scotland to be with his family more often.

Magnus, unable to resist the lure of his Lifemate, had wanted Cait badly enough to ignore the Curse. Thinking he could change it, he married her. The first year had apparently been idyllic. Then things had turned to shit.

Terrified that she would die due to his close proximity, Magnus had spent the next twenty years in exile from his beloved wife and their three sons. Once a year he’d visit, but a series of near fatal accidents, or Cait’s failing health, would always compel him to leave.

Their mother had been in ill health all their lives. She’d wasted away, pining for the husband who had married her and then lived to regret it. Their parents’ frustration and unhappiness had been a stark lesson for Magnus’s three sons.

Gabriel and his brothers were certain their parents had died of broken hearts. In five hundred years, no Edge had ever broken Nairne’s Curse. None ever would.

He could marry someone he didn’t love, but could never love the woman he married. Hell, he could never
love.
Period.

No such fucking thing as happily ever after.

He had his work with T-FLAC. The counterterrorist organization was his life. His passion. It was enough.

Between missions he relished the isolation, the ancient history, and the drafty halls of Edridge Castle. In a world filled with death and betrayal, the connection to his past kept him centered.

In his daily life as a T-FLAC operative in the psi or paranormal branch, he used the most sophisticated high-tech military hardware coupled with ancient magic. When he was in his ancestral home he used the weapons hanging on the walls. Weapons his family had collected and used for centuries.

His weapon of choice for today’s exercise was the claymore.

Weighing close to ten pounds, and with an overall length of more than four and a half feet, the claymore was a formidable weapon. Despite its antiquity, the lethal sword could deliver great sweeping slashes or powerful thrusts. Just what he was in the mood for this morning. He’d slept like shit last night, thinking about the good doctor. Or rather—trying
not
to think about her.

Narrow-eyed, Gabriel choked up on the leather-covered hilt with both hands as he anticipated his opponent’s next move.

“If I could read minds,” Sebastian said, clearly flagging, “
I’d
sleep with her.”

“I’m sure you would.” He used Sebastian’s distracted focus to springboard his riposte off his blade. And the game was back on. “But you can’t,” he told his friend, who was T-FLAC but not part of the special “psychic phenomena” branch. The psi division was considered, by some, to be the elite group of the counterterrorist organization. By others it was the whoo-hoo division that they didn’t understand. None were permitted to acknowledge the group outside the organization.

While there were still a few hundred known wizards in the world, the general population—normal people—were totally unaware that they even existed. And Gabriel and his brothers wouldn’t even
be
wizards if not for that long-ago Curse.

Jesus. Talk about a woman scorned. The witch Nairne had laid one on his cheating great, great, how ever many greats, grandfather, Magnus Edridge, several hundred years ago.

The Edge family had changed their name, and had paid for the slight ever since.

Thank God he and his brothers had decided that the Curse, like the proverbial buck, stopped with them.

Not that any of them believed there was such a thing as a “Lifemate.” But they weren’t taking any chances. It wasn’t difficult to keep women at arm’s length, not in their business. The hours were long, their whereabouts frequently top secret.

The three of them had long ago agreed that they’d keep their relationships with the opposite sex casual. And if one of them should veer off the straight and narrow, the other two would pull him back from the abyss.

In thirty-four years, Gabriel had never met a woman who tempted him to change the “casual” rule, not even a little.

Until he’d laid eyes on the gorgeous doctor Eden Cahill.

He’d been near her that once. It had been enough. He’d taken one look. One. And been consumed by an unspeakable lust. It had been instantaneous, overwhelming, and dangerous as hell. He’d wanted to breathe her breath, to absorb her distinctive scent, to learn her textures. He’d hungered to taste her soft mouth, and run his hands over her silken skin.

For the last three days he’d been able to think of little else.

He blocked Sebastian’s parry, edge on edge, with the
incrosada,
the crossing of the blades, bringing both weapons to a bone-jarring, shuddering stop. The vibration shimmied up his arm. The very air reverberated with the sharp scraping sound of steel on steel echoing off the ancient stone walls.

Their eyes met. Held.
Not sleeping with her,
he telegraphed as he gave a sharp twist of his wrist to indicate that his opponent should step back. Bloodlust raced through Gabriel’s body.