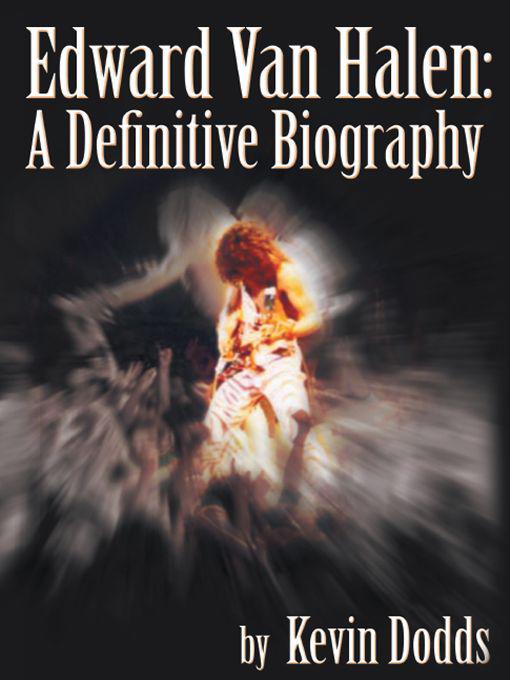 iUniverse books may be ordered through booksellers or by contacting:

Edward Van Halen is one of the most important and influential musicians that has ever lived. He is up there with just a handful that includes Mozart, Elvis, and Jimi Hendrix. Amongst the things that differentiate Eddie from that group is the fact that he has significantly outlived them all while facing no less tribulation.

I consider myself fortunate to have come of age during his initial rise to fame. I was seven when I got my first Van Halen 45 rpm record, “Dance the Night Away.” I was ten when “(Oh) Pretty Woman” came out and swept our entire household, as well as the entire nation. I was twelve when I saw one of the last few shows on the
1984
tour that the original Van Halen would ever play.

My childhood idols, if you will, predominantly consisted of two people in two distinct phases. Roger Staubach was Phase One. I grew up in Houston in a home full of Dallas Cowboys fanatics. Staubach’s career as the quarterback of the Cowboys, which included four Super Bowl appearances in the 1970s, faded just about the time Van Halen spilled into our house in early 1982 as my adolescence kicked off with a bang. Edward Van Halen was Phase Two. As far as boyhood heroes go, that was it. Of course, throughout my life, I have come to admire and respect a great number and a wide variety of artists and other incredible people. But my adolescence? I was that kid in high school that played all of Ed’s songs—proudly, note-for-note in most cases.

Since playing guitar became such an important part of my life, consequently, so did Edward. I studied him as if I were a presidential scholar. I wore out tape decks hitting start and stop and pause. I transcribed all of his songs that I learned that weren’t already published in the guitar magazines.

Ultimately, the
1984
concert would change my life and the life of my best friend Michael. After the concert, we formed our own band and began performing in public that very year at the age of twelve. We went on to establish a popular Austin band in the 1990s, but went into “retirement” after nearly a decade of trying to make it on our own terms. It was for the best. We started having kids. We can still reunite and draw a crowd every now and then. We didn’t run it into the ground or let it run us out of our own minds.

As I’ve aged, I have developed an insatiable craving for rock history. I have read easily a hundred rock history retrospectives, biographies, and autobiographies. I strive to understand the nature of the history of rock music not only because of its direct and major impact on culture, art, and society—but because of the role it plays in defining who I am.

By default, Edward Van Halen plays no small role in that definition. I can play them all: “Eruption,” “Cathedral,” “Ice Cream Man,” “House of Pain,” “Little Guitars,”—you name it. Anyone that can do that, someone somewhere is saying, “Man, that guy’s pretty into Eddie Van Halen’s music.”

I am also a huge fan of Elvis and Hendrix. I easily own around thirty books on Elvis alone, and there is no shortage of material on Jimi.

So, I went in search of something that didn’t exist: a definitive biography on Edward Van Halen. I had to ask myself why there are dozens of books on lower-tier rock stars and nothing specifically on Eddie Van Halen? He’s without question the second most influential guitarist after Hendrix—even though the length of Eddie’s reign dwarfs Jimi’s. There are collections of interviews with guitar magazines, he’s in
Rolling
Stone
every once in a while, there are a slim few books on even Van Halen the band. But there is not one single comprehensive, cohesive examination of the life of one of the world’s most influential musical artists.

That’s where I come in. I decided that if one had to do it, I was going to do it; so I set about putting it all together in one single piece of work.

Although the man was indeed a childhood hero, I have examined every aspect of his life which ultimately includes a horrific battle with alcoholism, adultery, and a host of other unpleasant realities of life for the rich and famous. It turns out I have things in common with Edward that allow me to view him from a few unique perspectives. I have followed him for his entire career. I know his music inside and out. And I am a recovering alcoholic and live with and manage depression. I’ve been through a divorce with a child.

While I have composed a comprehensive examination of Edward’s life, I had absolutely no intention of using sensationalism in any way whatsoever. The man’s life story follows an extraordinarily complex path. Ed has had his ups and downs, but who hasn’t? There are aspects of his behavior that belie some sort of supposed mental illness. Having conducted an absolutely thorough review, in my opinion, Edward suffers from two of the most common problems in society: depression and addiction/alcoholism.

Both are incredibly complicated diseases, especially when intertwined—and sadly, I know exactly what I’m talking about as I personally endured dual treatment for both diseases. Persons with highly functioning intellectual capacity are especially subject to these diseases, and genetic predisposition plays a hugely important role as well. It is not sensational to review his personal battles—it is simply a matter of fact, and also offers hope to those waging similar battles of their own. And, not to spoil the ending, but Edward—as of 2011—is in a great place. He is sober, happily married, and working with his son, his brother, and his one true creative partner, David Lee Roth.

While this is specifically not a book about the band Van Halen, the fact that Edward has been one of only two consistent members of the band for nearly his entire life, the history of Van Halen is certainly covered extensively throughout. Much the VH lore is debunked. There is also quite a bit of coverage of David Lee Roth, Valerie Bertinelli, and Sammy Hagar—this is solely because of how the relationships with those particular three people affected Edward’s own life so significantly. I will state it outright and make no apologies that I believe the most creative and fun Edward gets is when he is working with Dave.

I have never met Edward—although my brother did once—but even my own mother referred to Ed and his ever-present music and posters in our house as being something like a family member.