Eleanor of Aquitaine: The Mother Queen 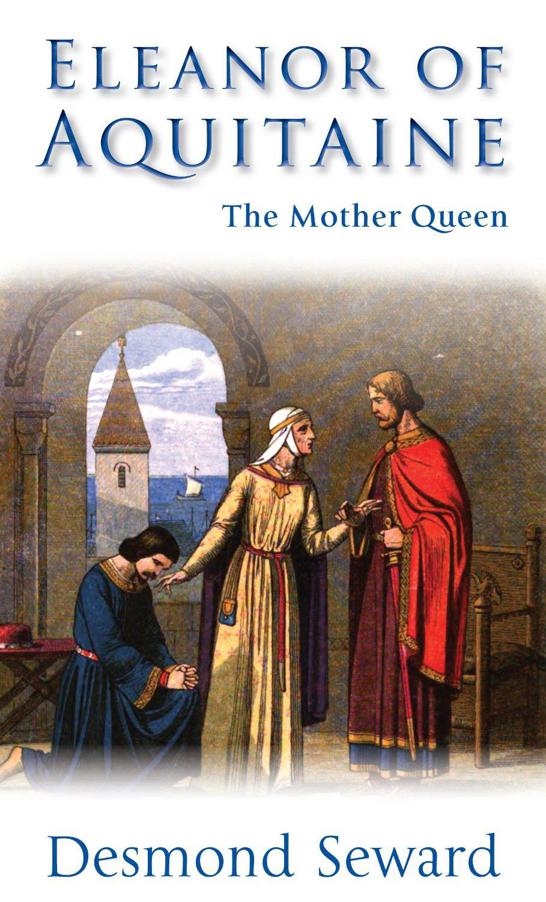 This edition published in 2013 by:

1   Aquitaine and the Troubadours

8   The Court at Poitiers

18   The Grandmother of Europe

20   The End of the Angevin Empire

‘With him along is come the mother queen,
An Até, stirring him to blood and strife.’

When Eleanor of Aquitaine died in 1204 her long career had been the most colourful and the stormiest of any English queen consort before or since. No other English king has possessed so formidable or so lavishly gifted a wife as Henry II. In her day the greatest heiress in Europe, she became in turn queen of France and queen of England, and among her sons were Richard the Lion-heart and king John. It is not a vulgar exaggeration to call her the sex symbol of her age, for she was as beautiful as she was regal, and universally admired. Splendid in person, in rank and fortune, and in adventure, when young she was the idealized and adored lady for whom troubadours wrote their songs — and whom disapproving chroniclers compared to Messalina.

At the same time Eleanor’s story is a family saga. She was very much the royal matriarch who, if not exactly a Livia, ruthlessly dominated her children and turned them against their father. It seems more than likely that her extreme possessiveness helped to bring out their evil qualities, and it may well have been largely responsible for Richard’s homosexuality. She feuded bitterly with at least one daughter-in-law and contributed towards the destruction of her own grandson.

The first ‘modern’ historian to give Eleanor her due as a politician was bishop Stubbs at the end of the nineteenth century. ‘This great lady who deserves to be treated with more honour and respect than she has generally met with’, he writes of her. The bishop considers that ‘she was a very able woman of great tact and experience, and still greater ambition; a most important adviser whilst she continued to support her husband, a most dangerous enemy when in opposition’.

Undoubtedly the key to Eleanor is her thirst for power. She was not prepared to be a mere transmitter of her inheritance to a husband, son or son-in-law, like every other woman in that masculine age. A great independent ruler in her own right, she lost her power when she married Louis VII of France, and later forfeited even her influence over him because of his dependence on monkish advisers and because she failed to bear him an heir. She retrieved neither power nor influence by her second marriage, despite marrying a man more than a decade younger than herself; when she intrigued against Henry she was imprisoned for fifteen years. She at last regained some power as unofficial regent for her son Richard when he was a prisoner in Germany, and then — when a very old woman — even more as the ally of her son John. She had connived at John’s succession, bypassing her young grandson Arthur (who was eventually murdered), because John guaranteed her power. As Shakespeare’s principal authority for English history, Holinshed, explained in the sixteenth century, ‘Surely, queen Eleanor, the king’s mother, was sore against Arthur … for that she saw, if he were king, how his mother Constance would look to bear the most rule within the realm of England’.

Shakespeare paints a truly appalling portrait of Eleanor in
King John.
Describing John’s arrival in France to fight the French king, he says:

With him along is come the mother queen,

An Até, stirring him to blood and strife.

Até was a Greek goddess of discord, of criminal folly. Shakespeare stresses John’s dependence on his aged mother’s strength and cunning, and shows her scheming against Arthur, so ‘That yon green boy shall have no sun to ripe’, only too pleased to see him in John’s murderous hands. She is called ‘a canker’d grandam’ and ‘a monstrous injurer of heaven and earth’, and has ‘a sin-conceiving womb’. Indeed Shakespeare’s ‘Queen Elinor’, though only a minor character in the play, is one of his most terrifying women, no less evil than Lady Macbeth.

Yet the Elinor of
King John
is only a caricature of one side of a fascinatingly complex personality. When she was young, men worshipped her, and not merely because of her beauty or rank; when she was old, her children venerated her. She could be generous on a truly regal scale. Emerging at Henry II’s death from her long confinement as the all-powerful queen mother, she immediately issued an order for the release of prisoners throughout England because, in her words, ‘by her own experience prisons were hateful to men and to be released from them was a most delightful refreshment to the spirit’. She also patronized and cultivated the great abbey of Fontevrault, helping to make it a refuge for battered noblewomen fleeing from brutal husbands.

Nonetheless Eleanor has always been overshadowed by her menfolk. Perhaps it is not altogether surprising, with a husband who murdered archbishop Thomas Becket, a son who was the hero of the crusades, and another son who granted Magna Carta. Moreover any heiress would have been dwarfed by so vast an inheritance as Eleanor’s duchy; it was the foundation of the Anglo-French empire of the Plantagenets and the origin of the Hundred Years War. The greatest beauty of her age has dwindled into Henry II’s rich old wife — remembered for murdering Fair Rosamund, a crime she never committed — or Shakespeare’s Elinor and the virago oft popular films and television serials. Her loveliness and glamour, her patronage of poets, her throwing-off of the constraints with which convention shackled women in the twelfth century, are all forgotten, as are her very real gifts as a politician and a ruler.

Usually it is all but impossible to write a flesh and blood biography of any figure from the high Middle Ages, expecially a woman, because of the lack of sources. But Eleanor so impressed her contemporaries that there is an abundance of material. This book is an attempt to do justice to a magnificent woman and a magnificent life.

1 Aquitaine and the Troubadours 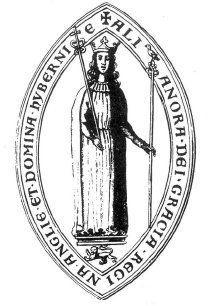 ‘Aquitaine, abounding in riches of every kind.’

‘Her passions are made of nothing but the finest parts of pure love.’

In the twelfth century, France was a geographical expression rather than a country, divided between several peoples who spoke different languages. As yet the Capetian dynasty had little real power. The king was a titular monarch who ruled scarcely more than the neighbourhood around Paris — the Ile de France (so-called because it was almost surrounded by rivers) — together with the Orleannais and Bourges. He enjoyed considerable prestige and moral authority, but he was still no more than the first among many great nobles; although they were his vassals, they nevertheless ruled vast territories as independent princes. The duchy of Aquitaine was the largest of these fiefs. It had passed by inheritance to the counts of Poitiers, and the count-dukes ruled almost the whole of south-western France from the river Loire to the Pyrenees.

Aquitaine proper — roughly the
ancien régime
provinces of Guienne and Gascony — had all the ingredients of a separate nation, and was no less of a country than Brittany. Geographically it was unified by the winding river Garonne and its tributaries, and by such natural frontiers as the Atlantic, the Pyrenees and part of the Massif Central. It possessed racial unity, its people being basically Latinized Basques who had little in common with the Northern French, and its own distinct temperament, which was — and still is — an explosive compound of vivacity and pride. Moreover, it was not merely self-supporting but enviably rich. ‘Aquitaine, abounding in riches of every kind’, Ralph of Diceto called it, and another chronicler speaks of ‘opulent Aquitaine’. From its capital, Bordeaux, wine merchants sailed to England, Germany and Scotland, and from Bayonne men went out to hunt the whale. It was a country of many landscapes, the heaths and sandy wastes of Gascony and the mountains contrasting with flat, lush plains and impenetrable woodland. There were yellow-walled and red-roofed towns, Romanesque cathedrals and rich abbeys. There were also many lordly castles, which were much more comfortable than the chilly keeps of the north, for in the south the tradition of the Gallo-Roman villa had never quite died out.

To the north of Aquitaine was the county of Poitou. Besides its capital of Poitiers, it contained other almost equally fine towns, and La Rochelle was nearly as prosperous a port as Bordeaux. The countryside was an attractive mixture of oak
bocage,
flat farmland — the
plat pays
— and deep pine forest. The Poitevins spoke a dialect of northern French, which to some extent separated them from the Aquitainians.

For the people of Aquitaine, including its rulers and Eleanor herself, spoke a tongue very different from that of Northern France. All the southern French used a number of dialects nowadays known collectively as Provencal, or
langue d’oc,
as opposed to the
langue d’oïl
of the north. One of these dialects, the
Lemosin,
became a written literary language. It was the remarkable achievement of Provencal to create the first vernacular lyric poetry of any merit — with the exception of Irish — in Western Europe since classical times. ‘Twelfth century Provencal, softer than sleep’, Helen Waddell says of it. She adds that ‘Provencal poetry demands no other intellectual background than that of its century, a May morning, the far-off singing of birds, a hawthorn tree in blossom, a crusade for the holy sepulchre. It is the Middle Ages in the medium of a dream’.

The poems of the troubadours were written as songs with lute accompaniment. They might tell of war, politics or rivals, or they could be satirical — as in the form known as the
sirventès
— but usually they were about ladies. A new and widespread devotion to the Virgin Mary had induced something of a reverence for women in general. The troubadours developed a cult of platonic love (
amor de lonh,
love from afar) and sang of an impossible passion for some unattainable noblewoman, invariably married and a great lady, declaiming how lovely she was and how despite her scorn they would continue to adore her. Women of rank — young or even not so young — were surrounded by retinues of sighing troubadours, mostly impoverished petty nobles. In theory, at any rate, physical love played a very small part; a troubadour was expected to think himself well rewarded for ten years of devotion by the gift of a single rose, though he would drop heavy hints for largesse.

The Ghost of Grey Fox Inn by Carolyn Keene
Red Line by Brian Thiem
Everyday Hero: The Volunteers - a Darling Bay Short Story by Lila Ashe
Galileo's Daughter by Dava Sobel
Thorns by Kate Avery Ellison
The Morning After by Matt Coolomon
The Rape of Venice by Dennis Wheatley
the Shortstop (1992) by Grey, Zane
The Hungry Dead by John Russo
How to Party With an Infant by Kaui Hart Hemmings