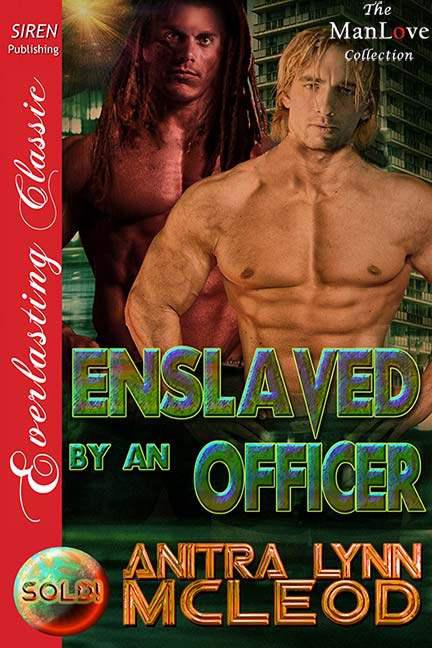 Sold! 8
Enslaved by an Officer
His life would never be the same…

Honor Vengeance took on the task of hunting down the illegally enslaved Earthlings because of his firm conviction he would never fall victim to their unique charms. But his mission brings him into repeated contact with humans, and his resistance quickly fades. Worse, there’s one in particular he hungers for.

Carver Tam is on the verge of playing pro football when he’s abducted and sold. Furious that he’s lost everything he’s worked so hard for, he’s not about to surrender to his new master. When he ends up on a world where slaves are worked to death, he has no choice but to lead a rebellion. The last thing he was ever expecting was to be forcibly rescued by an eight-foot-tall, marooncolored alien officer named Honor Vengeance.

Their attraction is instant and irresistible, but causes devastating consequences. Will their relationship be the last straw that forces the Krase government to cease their mission to rescue the illegally enslaved Earthlings?

Siren Publishing, Inc.
ABOUT THE E-BOOK YOU HAVE PURCHASED:
Your non-refundable purchase of this e-book allows you to only ONE LEGAL copy for your own personal reading on your own personal computer or device.
You do not have resell or distribution rights without the prior written permission of both the publisher and the copyright owner of this book.
This book cannot be copied in any format, sold, or otherwise transferred from your computer to another through upload to a file sharing peer to peer program, for free or for a fee, or as a prize in any contest. Such action is illegal and in violation of the U.S. Copyright Law. Distribution of this e-book, in whole or in part, online, offline, in print or in any way or any other method currently known or yet to be invented, is forbidden. If you do not want this book anymore, you must delete it from your computer.
WARNING: The unauthorized reproduction or distribution of this copyrighted work is illegal. Criminal copyright infringement, including infringement without monetary gain, is investigated by the FBI and is punishable by up to 5 years in federal prison and a fine of $250,000.
If you find a Siren-BookStrand e-book being sold or shared illegally, please let us know at
[email protected]
A SIREN PUBLISHING BOOK
IMPRINT: Everlasting Classic ManLove

All art and logo copyright © 2013 by Siren Publishing, Inc.

If you have purchased this copy of
Enslaved by an Officer
by Anitra Lynn McLeod from BookStrand.com or its official distributors, thank you. Also, thank you for not sharing your copy of this book.

This is Anitra Lynn McLeod’s livelihood. It’s fair and simple. Please respect Ms. McLeod’s right to earn a living from her work.

DEDICATION
For fans of the series who desperately wanted to know what happened to Honor Vengeance. This one’s for you!
ENSLAVED BY AN OFFICER
Sold! 8
ANITRA LYNN MCLEOD
Copyright © 2013
Chapter 1

Honor Vengeance never should have licked a human. He’d tried everything to get the taste out of his mouth but simply couldn’t. Hunger gnawed at him. Lust filled his head and made his cock and
strosan
strain to full hardness. He wasn’t certain if he wanted to eat a human or fuck one. Possibly both. What irritated him to no end was that he had taken on the arduous task of hunting down the illegally stolen Earthlings because he didn’t trust his officers not to become ensnared in the web of desire the humans seemed to cast over Krase warriors.