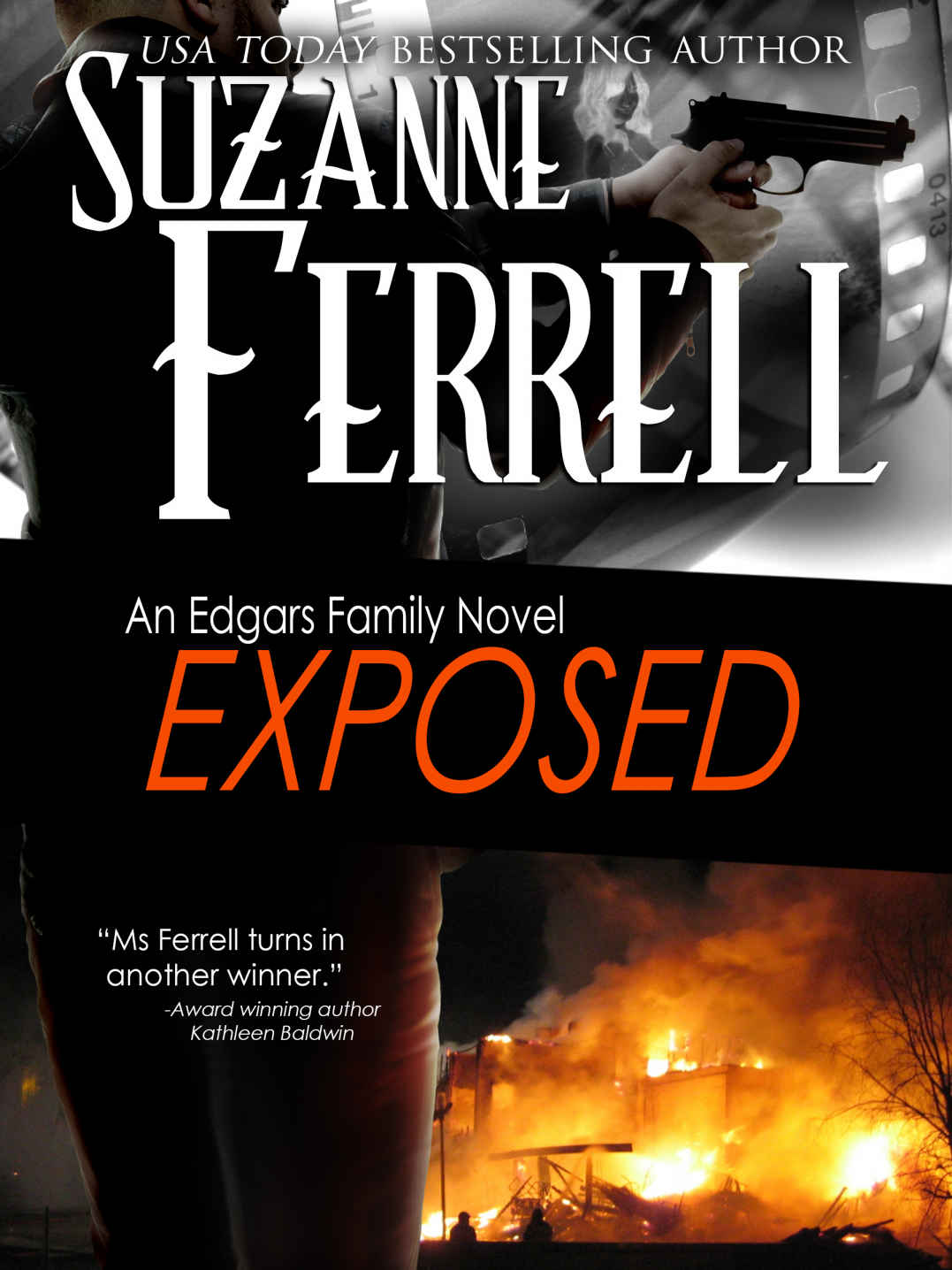 Formatting by
Libris in CAPS

All rights reserved to the Author

This book and parts thereof may not be reproduced in any form, stored in a retrieval system, or transmitted in any form by any means - electronic, mechanical, photocopying, or otherwise - without prior written permission of the author and publisher, except as provided by the United States of America copyright law. The only execption is by a reviewer who may quote short excerpts in a review.

For my sister Sami.

You are the best sister in the entire world.

and yet you still find things that make you laugh.

Your strength, loyalty, love and wit amaze me.

The Ferrell team always deserves a big thank you!

To my indispensable critique partner and wonderful friend, Sandy Blair, Thank you for everything you do to help me turn out the best book.

I’d like to thank my cover artist, Lyndsey Lewellen of LLewellen Designs. I love how you take my vague descriptions and turn out such eye-catching, dynamic covers. I literally wrote EXPOSED to fit your design.

My formatter at Libris in CAPS, Mitchell Rhodes. You’ve done such a great job.

And my editor, Tanya Saari. Thanks for helping make my stories the best they can be.

Damn, he hated being cold and damp
.

Hunkered down in the half-built building across the street for hours in the rain, he’d been waiting for her to come home. Finally, the light came on in the apartment. He picked up his camera.

Using the long-distance lens, he zoomed in as the young woman entered the living area. She threw her bag on the sofa and crossed out of sight into what he assumed was her bedroom. Two nights ago, she’d approached him about information that implicated her employer in a kick-back scheme. She’d wanted to know how much money she could get for the story, and wanted to remain anonymous.

He’d photographed her before approaching the table at the pizza joint where she’d set up their meeting. Two clicks of his internet app and he had her name and that of her employer. Washington was a city with secrets, most of which weren’t as hidden as people wished. Especially political identities.

The brunette told him a story about being forced to have an affair with her employer or face unemployment and possible repercussions stretching back to her home state. A sex scandal. Not too unusual in this city.

He’d followed her after the meet. Having worked in hot spots all over the world, where hiding from danger was a minute-by-minute fact of life, following one barely-out-of-law-school girl in the nation’s capital was a piece of cake.

Sardonic laughter bubbled up inside him.

Hell, she hadn’t checked once to see if she had a tail. Talk about naïveté.

That night, she’d met her employer at this apartment. Typical cliché for Washington. Older man, young, nubile girl. At the time, all he’d had with him was his camera phone. Fine for taking selfies, but crap for getting the gritty photos he knew he’d need.

The woman crossed past the window towards the door. Dressed in a robe, probably hiding some sexy lingerie beneath. Yep, cliché.

A black SUV had pulled up outside the building. Ah, her sugar daddy had probably arrived.

Adjusting the lens, he pressed the shutter release to capture her welcoming him with open arms.

Suddenly, she flew through the air and landed against the wall. She crumpled in a heap on the hardwood floors.

He kept the camera clicking.

Two men stalked through her apartment, one turning over furniture, the other grasping the dazed woman by her dark hair and hauling her to her feet, just to slam a fist into her face and send her crashing into the wall again, knocking a painting to the floor beside her.

A third man walked into the room. Cool. Collected. In control. He held up a hand as the first thug lifted the woman to her feet again. Blood dripped from her nose and mouth.

The leader said something to her.

Damn, he wished he had some sort of long-distance listening device to hear what the man was saying. He kept taking pictures.

The woman shook her head.

Thug number one slapped her.

Controlled said something else.

He zoomed in on her face.

Tears mixed with the blood. Again she shook her head.

Controlled pointed a gun at her. It had a silencer on the end.

Fuck! They killed her!

He scrambled back behind a cement column, afraid they’d somehow be able to see him through the dark, even nearly half a football field away. Once his heartrate returned to normal, he focused through the camera lens again, zooming out to keep the whole room in the frame.

The picture was back in its former spot. Controlled held the woman’s laptop case in his hand while thug one and thug two were bent over, rolling up her carpet. After a few minutes, they hefted it onto their shoulders.

Crap. She had to be inside it. They were getting rid of her body.

What if she wasn’t dead?

Grabbing his equipment and the wrappers from the burgers he’d eaten earlier, he scrambled out of the construction site to his rental car parked in the lot next door. He wasn’t leaving any evidence that a witness to a murder had been here. If anyone even suspected someone had been here, they’d somehow figure out it was him. Nope. Not happening.

Inside the car, he started the engine, then scrunched down in the driver’s seat to watch the exit of the apartment building, keeping the lights off. It took a few minutes—probably because they were carrying a dead body in a rug—but finally, the trio exited. Controlled went to the rear of the SUV parked on the street and opened the rear door for the thugs to deposit the girl and rug inside.

After they closed the door and climbed into the vehicle, he snapped a picture of the license plate, then put his car in gear. He gave them half a block head start, pulled out, and slowly started to tail them. At first he stayed close by, trying not to lose them in the rain and the traffic. Once they turned off the Whitehurst Freeway onto Canal Road, heading northwest out of the city, the traffic thinned out and he backed off a little. He had a sinking feeling he knew where they were headed. All he needed was to keep close enough to keep an eye on them to see where they pulled over. There wouldn’t be many options. He’d drive past, park and double back on foot.

If he was really smart, he’d turn around and head straight for the airport.

The investigator in him couldn’t let it go.

What if she were alive still? What would he do? She was probably dead. Had to be.

Several car lengths in front of him, the SUV passed Georgetown University and continued up the Canal Road. Once they approached Chain Bridge Road, he backed off more. Here they had a choice. There was a parking spot on the left side, where joggers and hikers could park. Kind of out in the open, but on a rainy night, not too many witnesses.

The SUV drove past in the right lane.

He eased up even more on the gas.

Up ahead, they pulled off to the right without a signal.

He glanced to his right as he drove past. They’d pulled around behind a brick building. The black, metal-framed windows were frosted, and it had a weathered metal roof.

Crap. He needed a place to pull over.

Suddenly, to his right, a few feet ahead, there was a second turn-off. He pulled in. The thick growth of trees would hide his car. Pulling in farther, he carefully moved his car into the underbrush then cut the engine. He reached over his head and turned the overhead light to off. He switched cameras, preferring his digital one for taking pictures in the dark. As quietly as he could, he climbed out of his car and closed the door.

Had they taken her into the building? Or down into the woods?

Loud crunching of brush and heavy breathing carried through the night. They were dumping the girl in the woods. Enough scavenger animals from Rock Creek Park and the Canal parklands would help the body disappear before the big hiking season started up in summer.

Did he try to follow them? They were definitely to his right, probably about fifty feet in front of him.

What if they ran into him? He had no excuse for being out in these woods in the rain, at this hour. Controlled had a gun in the apartment, so he had to assume the man was still armed.

But if he didn’t try to follow them, he wouldn’t know where they’d dumped the girl.

He eased his way into the brush, trying to parallel the path they’d probably taken. Going slow, he picked his way through the underbrush and bushes, trying not to make much noise. It would be great to turn on the flashlight app on his phone, but that would be like asking them to shoot him.

God, he prayed no snakes were around this time of night.
Probably too cold. Hopefully too cold.

Up ahead to his right, he could see lights, moving back from the woods.

They hadn’t taken her far
.

As the lights got closer, he hunkered low near the trunk of a thick tree.
Please don’t let it be poison sumac.
He’d love to get pictures of the three of them this close, but didn’t dare. He’d have to hope the ones from the apartment would give him good images of their faces.

They passed less than ten feet from him.

He held his breath and remained still. Finally, he heard three car doors close, and the engine of the SUV start up. He exhaled, but remained still until he heard it drive away.

Slowly, he moved the ten feet to the right, to be on the same path the men had taken, working his way into the woods. Now he had his flashlight app on, slowly scanning side to side, trying to guess just how far they’d gone before Thug One and Thug Two gave up hauling the heavy bundle. Suddenly, to his right, he saw what at first looked like a log.

His heart felt like it would pop out of his chest.

He lifted his camera, flipping on the flash, and snapped a picture of exactly where they’d dumped her. Then he wiped his sweaty palms, one at a time on his jeans, before moving closer. They’d also wrapped the body and rug in a huge garbage-bag-type plastic tarp.

Kneeling down next to her, he peeled back the plastic to find an expensive Oriental rug. He pulled back one corner, then tugged until it unraveled enough to reveal her dark hair over her face. Again he took a picture. Then he smoothed the hair away from her face. It was very pale, but her eyes were closed. He snapped again.

He had to know if she was alive or not.

Slowly, he reached a hand towards her neck.

The Bourne Retribution by Eric van Lustbader
All the Broken Pieces: (Broken Series Book 3) by Anna Paige
You Will Never See Any God: Stories by Krause, Ervin D.
Louisa Revealed by Maggie Ryan
Diary of a Painted Lady by Maggi Andersen
Unknown by Yennhi Nguyen
Why Did You Lie? by Yrsa Sigurdardottir, Katherine Manners, Hodder, Stoughton
Whisper To Me In The Dark by Claire, Audra
Club Prive Book 3 by Parker, M. S.
Change of Heart by Molly Jebber