Extreme Medical Services: Medical Care On The Fringes Of Humanity 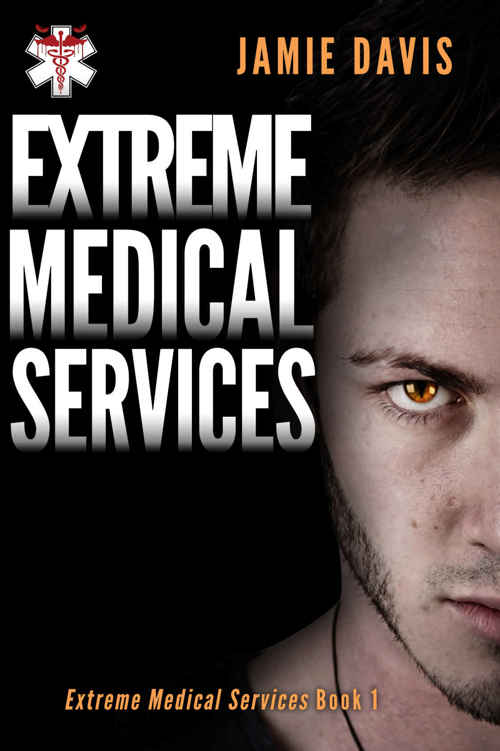 This is a work of fiction. Any resemblance to actual persons living or dead, businesses, events, or locales is purely coincidental.

Reproduction in whole or in part of this publication without express written consent is strictly prohibited. The author greatly appreciates you taking the time to read his work. Please consider leaving a review wherever you bought the book, or telling your friends about it, to help him spread the word.

Thank you for supporting my work.

To Amy, Chris, Mindy, and Saralynn. Maybe all my crazy stories over the years will come to something after all.

To my editor, fellow author, and friend Sam Bradley who helped make this book come to life.

Get the prequel book “The Vampire and the Paramedic” Free

Want to know what happens next?

Dean couldn’t believe what was happening. He was in a darkened bedroom lit only by a single overhead light and the flashlights of he and his partner. A struggle was taking place on the bed in the corner accompanied by grunting, growls and shouts of the two paramedics and their patient. A diminutive dark-haired female was wrestling with a large, snarling, furry creature on the bed.

"Get me the glucagon,"

Brynne Garvey said. “Right now!” Brynne is a lot stronger than she looks, Dean thought as he struggled to figure out how to reconstitute the powdered drug in the preloaded syringe. She was only about five foot two inches tall and her long, straight brown hair pulled back in a ponytail made her look younger than her 34 years.

“Probie. I. Need. That. Syringe.” She said through gritted teeth.

"I'm coming, I'm coming. I've never used one of these prefab syringes before." Dean finally got the syringe assembled and handed it to his preceptor. "Here."

"I can't do the injection. I'm a little busy here," she said as she grabbed one of the creature’s flailing arms and pinned it to its body with one leg. She avoided the claws that had spontaneously grown out of the creature's fingertips. "You do it, Probie! It's time you stepped up your game and showed me why you got this gig to begin with." The struggle on the bed intensified as the snarling creature seemed to sprout more body hair and grew even stronger. “Do it! Glucagon! Now!” The last was almost a whisper.

Hesitantly, Dean stepped forward and injected the syringe into the hairy thigh of the creature struggling with his partner.

As the beast continued to struggle, Brynne muttered under her breath. “Humans are much easier to deal with.”

A normal looking man wearing the same shorts and t-shirt as the creature Brynne had been wrestling with was sitting on the edge of the bed eating a peanut butter sandwich.

"I'm sorry, Brynne. I must've dozed off after my insulin shot tonight.”

"You've got be more careful, Bob,” Brynne said as she zipped up the medication bag. "That's the third time this month. You're going to hurt someone one of these days. Here, sign this transport refusal so we can go." She handed the patient a tablet computer that Bob signed with a finger.

The paramedics picked up their gear and headed out to the ambulance. Dean climbed into the passenger seat staring straight ahead as his new partner and preceptor started the engine. The diesel motor growled to life. “So werewolves are …” Dean started.

“… real”, she finished. “And whenever anything causes a Lycan - and they prefer being called Lycan – to have altered mental status, they lose control and shape shift. That is the cause of most attacks, by the way. They aren't that bloodthirsty. Bob’s a CPA and a member of the Chamber of Commerce.”

“… treat known or suspected Unusuals who need emergency medical attention.” Brynne glanced over at him. “It's not all that tough. They’re mostly human, but not. You apply human anatomy and physiology then diagnose the problem based on what you know about the type of Unusual you're dealing with.”

Dean shook his head. “So I worked my butt off to graduate at the head of my class, aced my NREMT exam on the first try and I get rewarded by getting assigned to be a paramedic for monsters?”

“Unusuals!” Brynne said as she gunned the engine and pulled away from the nondescript suburban home. “Look, Dean, I know this is a bit of a shock to you. Believe me, I didn’t ask to break in a new partner. The job is hard enough without dealing with a brand new paramedic unfamiliar with this type of specialized work. I was hoping to get paired with somebody who had some real street experience. Someone who knows what kind of things we’re likely to run into, but, it looks like we’re stuck with each other.”

Unusuals … werewolf CPA, Lycan … Dean's mind was trying to put it all in perspective.

She glanced over at him as she drove. She must have seen the shocked look on his face and shook her head.

“Say something. I need to know you're tracking what I’m telling you.” After a pause, she raised her voice. “Dean, answer me.”

“What do you want me to say?” Dean snapped back. “I finish school and start on what I think is my dream job - saving lives, making a difference - and now I’m - I’m … hell, I’m not sure what I’m doing!”

“You are saving lives and making a difference to people who don’t need to be ostracized. You can apply for a transfer from the chief after this shift is done. For now you need to listen carefully to what I have to say or you’re going to end up getting hurt. Worse, you could get me hurt,” Brynne glared at him. “I need you to listen to me like you would any of your academy preceptors. On a call, do what I say, when I say it, without question. A lot of the folks we serve are a bit prickly about how the rest of society views them. We need to tread carefully. For you, that means stay right next to me and keep your mouth shut. When I ask for something from our kit or the back of the unit, you hop to it and get what I need. Got it?”

“Uh, yeah, I guess so,” Dean replied. He looked out the window as the Elk City streetlights went by in the night, the overhead lights forming little pools of light surrounded by what he realized were too many shadows. Shadows that apparently really do have monsters hiding in them.

He looked over at Brynne, “Tell me again just what happened back there. Clearly you’ve been to that house before and knew that guy.”

“Bob is an okay guy,” she began. “We didn’t start to get calls to his house until recently. He and his wife are separated, and I think she used to help him treat his diabetes and keep his blood sugar levels even. Since she left we’ve been there a bunch of times to handle what dispatch alerts as an ‘agitated subject.’”

Brynne pulled the ambulance in to a strip mall parking lot and pulled up in front of the Dollar Store. Putting the vehicle in park, she turned in her seat and looked at Dean. The overhead lights in the parking lot lit up the left side of her face. “Look, Dean, you must have some mad skills or you wouldn’t have been assigned to this unit. You just need to take the stuff you know and apply it to a new situation. Unusuals are people just like us for the most part. Think of them as having a comorbid medical condition that affects the current problem they’re having.

Dean felt a throb between his temples. He knew his first shift might be tough, but this was off the charts.

She continued, “In Bob’s case, he’s a Lycan. He has a disorder that causes him to change form when he gets upset or loses control somehow. Most of the time Lycans manage their whole lives without anyone knowing they’re any different. The full moon thing is just a myth. It takes some medical condition or trauma to cause them to lose control and change. In Bob’s case, we never went to see him before his marital situation changed. Now that his diabetes is out of control, he starts shifting the minute his sugar levels get low enough to affect his mental status. Normal people become anxious, agitated, sweaty, diaphoretic, and thirsty. Bob becomes a hungry wolf-man.”

She stopped, the pause getting Dean’s attention. He looked up from staring at his lap and peered at her, “But how am I supposed to know what to do for him?”

“What do you do for any diabetic with low blood sugar?” she asked.

“I give them glucagon intramuscularly, IM. The hormone makes the liver release sugar stores into the blood and …”

“… and get him the higher blood sugar level needed to reverse the shift to wolf-man,” Brynne said, finishing his thought. “You do know this stuff.”

She turned back to the front and shifted the ambulance back into gear, then pulled out of the parking lot and back onto Route 40. “Nobody gets sent to this station if they’re an idiot. We don’t need ‘cookie-cutter’ medics here who can only follow protocols. There are no specific protocols for Unusuals. What we need are true medical professionals who can apply what they know critically to a given situation and improvise when needed. Someone must’ve seen that in you or you wouldn’t have been sent to Station U.”

Dean fell into his own thoughts and looked ahead as they crossed through the green light at an intersection. “That seemed awfully dangerous back there. What about the old EMS mantra of ‘scene safety’ first and foremost?”

Brynne chuckled, “Well there are two answers to that. First, no scene is ever really safe. What that mantra means is to be aware of potential dangers and proceed as safely as you are able …” She held up her right hand to forestall his objection. “… within reason. I know there are situations that require us to call for special assistance before proceeding to the scene. For Unusuals, well, let’s just say that the police have their own version of ‘Station U.’ Actually we don’t call them that often, which brings us to the second answer.” She turned into an industrial park and headed back toward the last building. “Remember that extra set of vaccinations you got after you completed your class?”

“The Hepatitis B and tetanus boosters?”

“Those weren’t Hep B or tetanus shots. At least that’s not all they were. You got zapped with an experimental batch of the latest in Unusual Prevention vaccines. Didn’t you read the fine print in the release they had you sign?”

“Uh, no? Why?” He replied. “You mean they snuck them in without making me aware of what they were giving me? That’s malpractice!”

“Possibly. No, probably.” Brynne corrected herself. “I’ve been told it’s covered under some Homeland Security thing. Anyway, if you’d read the whole release before you got your shot you would have realized you were opting in to ‘additional vaccinations as required to perform your duties.’”

Down Among the Dead Men by Peter Lovesey
Too Many Secrets by Patricia H. Rushford
The Surf Guru by Doug Dorst
Venice Heat by Penelope Rivers
Walls within Walls by Maureen Sherry
Cold Day in Hell by Richard Hawke
Last of the Independents by Sam Wiebe
The Value Of Rain by Shire, Brandon
William Styron: The Collected Novels: Lie Down in Darkness, Set This House on Fire, The Confessions of Nat Turner, and Sophie's Choice by Styron, William
Neighbor Games (Cuckolding Shorts Book 6) by Ben Boswell