Read Falling Into Us Online 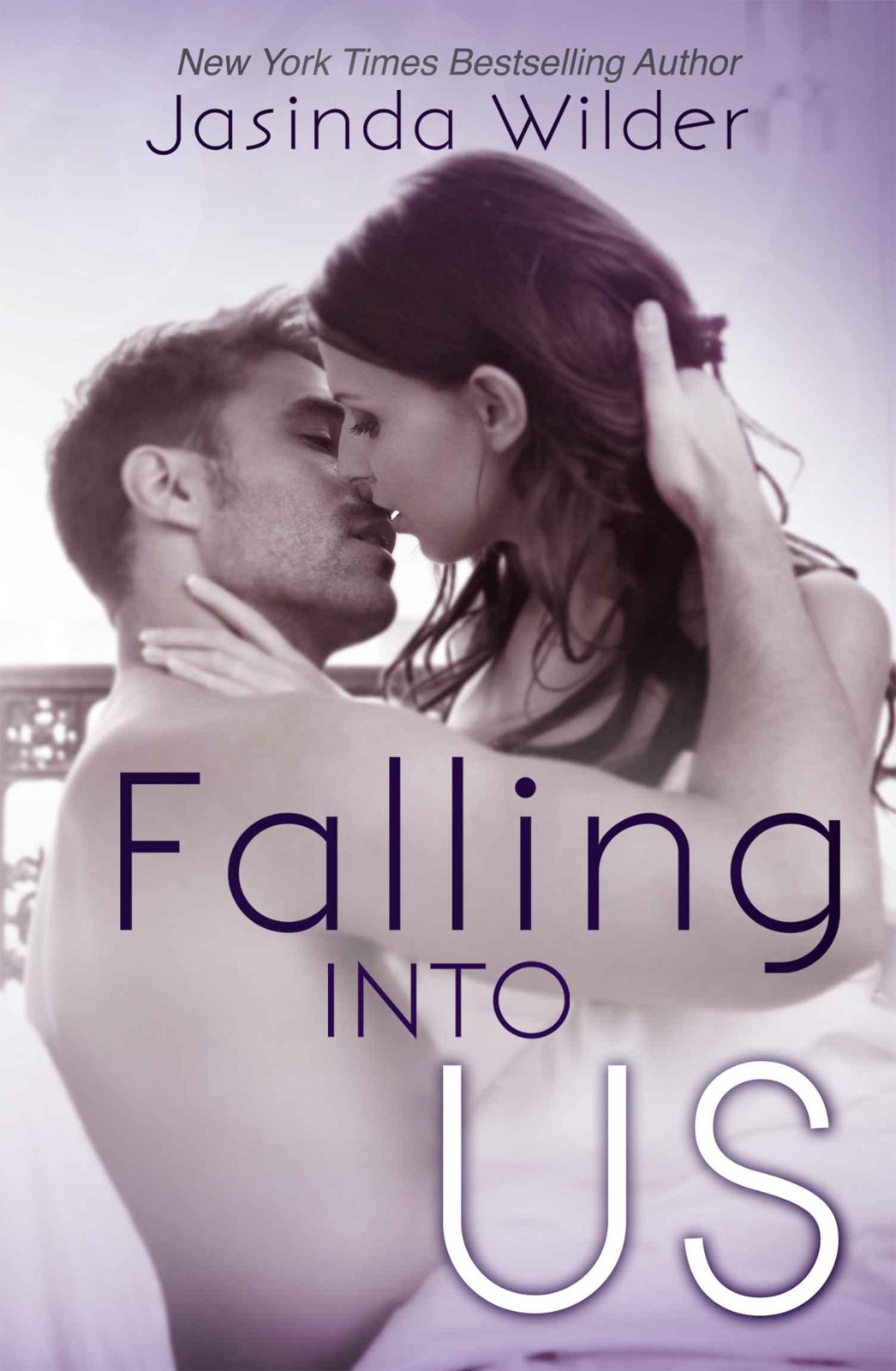 All songs, song-titles, and lyric excerpts quoted herein are the property of the respective copyright holders.

If you’ve been hurt the worst by those meant to love the most,

if you’ve sought release from agony through the bliss of pain,

if you’ve been rejected because of a perceived imperfection,

then this book is for you.

you are not alone;

ONE: A Beginning; or, a Dare

“Quit being a prick, Malcolm.” I gave Malcolm Henry a hard shove, and he stumbled away.

“It’s a legitimate question, Dorsey. You’ve had a crush on Nell Hawthorne for-fricking-ever. When are you gonna man up and ask her out?” Malcolm was the only black guy on the varsity team, our fastest runner, our star running back, and the third part of our team’s All-State power trio, along with Kyle, the QB, and me, the wide receiver.

Malcolm was built like me, short and stocky and muscular, and he had a huge seventies-style afro that he cultivated carefully, figuring if he had to be the only black guy on an all-white, rural community football team, he might as well look the part.

I gave him a glare. “Shut the hell up, Malc.” We were tossing a ball back and forth on the field as we waited for the other guys to dress out. We’d both gotten out of class early since we had phys ed sixth period, and Coach Donaldson was the gym teacher. “I’m not chicken. I just haven’t had the right opportunity. She’s Kyle’s best friend, for one thing. I’m not sure how he’d take it. And besides, you know what happened with Mr. Hawthorne and Aaron Swarnicki. He’d have my balls on his desk if I had asked her out. She literally
just
turned sixteen like a week ago.”

“Which means you’ve had a week to plan this shit. Come on, Jay. Don’t puss out on me now. You’ve been whining about how bad you want a shot at Nell since seventh grade. Now’s your chance.” He tossed the ball to me, then took off running, sprinting in a zigzag pattern. I hurled the ball at him but missed him by a mile. “Good fucking thing you’re not the QB, Jason. You suck.”

“Like you could do better? You couldn’t hit the broad side of a barn.”

He threw the ball to me, nailing me hard in the chest. “I bet I could hit the broad side of Nell’s ass from fifty yards away.”

I knew he was riling me, but it worked. “Don’t talk about her that way, you turd.” I threw the ball back to him, then mimicked his earlier move, cutting right and sprinting several yards before turning to catch the ball.

“Then man the fuck up. Ask. Her ass.
Out.
” Malcom threw the ball and it landed flush in my arms; Malcolm could throw better than I could, but I’d never admit it to him.

At that moment, Blain, Nick, Chuck, and Frankie all trotted out onto the field, tossing their gear in a haphazard pile on the sidelines. I threw the ball to Frankie, who charged at me, tucking the ball in the crook of his arm. I let him zip past me, then easily caught up to him and tackled him to the ground, nailing him hard in the side. We both went down laughing, but when we hit, it was Frankie who took longer to get up, gasping for breath.

“You’re too chicken, Dorsey.” Frankie pressed a fist to his ribs, wincing. “Fuck, man. I think you bruised a rib. I don’t have my gear on, dude, take it easy.”

“Pussy. Can’t take a tackle? Maybe you should try running a few plays, take a few real tackles. Might help you man up a bit, you fucking tub.” I grinned at him as I said it, because we both knew Frankie was the offensive lineman responsible for keeping my ass safe from getting nailed as I cut out for a run. He was a hell of a player and one of my best friends, after Kyle and Malcolm.

“Yeah, yeah, I’m the tub, you’re the twinkle toes little fairy.” He feinted at me, then wrapped a burly arm around my neck and squeezed; Frankie was huge, truly mammoth, seventeen and already standing over six feet tall and weighing in at nearly two-fifty. He was the kind of guy who looked overweight at first glance, but if you felt him tackle you, you’d realize he was two hundred and fifty pounds of solid muscle. “Maybe you should quit prancing around the field like a fucking twinkie and try blocking for your baby little ass.”

I gasped for breath as he squeezed and had to drive my fist into his ribs to get him to let go. Blain, the safety and the team peacemaker, shoved both of us aside. “Knock it off, guys. You know how Coach is about horsing around.”

“Shut up, Blain,” Malcolm, Frankie, and I all said in unison.

“Let’s get back to how you’re too chicken to ask Nell out,” Malcolm said.

“How about let’s not.” I threw the ball sideways across the field to Chuck, the second-string receiver, who caught it and threw it to Nick, another offensive lineman.

I laughed. “What is this, second grade? You double-dog dare me? Seriously?”

Frankie didn’t laugh with me. “Yeah, I’m daring you to ask out Nell Hawthorne. I’m sick of you acting like your crush on her is some big secret. Everyone knows but her and Kyle. Make a move or shut up about it.”

“I’ll sweeten the pot,” Malcolm said. “I’ll bet you a hundred bucks you won’t do it.”

“That’s stupid. I’m not taking bets or dares about this. She’s my friend. I’ll ask her out if and when I’m ready.” I busied myself putting on my pads in an attempt to try to hide my discomfort

“Yeah, she’s your friend…because you’ve been friend-zoned.” This was Malcolm.

“I have
not
been friend-zoned.” I tightened my cleats unnecessarily, jerking the laces so hard my foot twinged, and I had to loosen and retie them.

Malcolm could always see right through me. “Yeah, you have, and you know it.” He stood nose to nose with me. “A hundred bucks. Put up or shut up.”

I shoved him away, but he got right back in my face and shoved me back. “I’m not fucking betting your asses about this,” I said.

This elicited a round of laughter from the entire offensive line, now gathered around us.

Frankie lumbered toward me, puffed up and ready to throw down. “Yeah, I did. ’Cause that’s what you are.”

I faced him down, but we both knew I’d never dare actually step up to Frankie: We would both end up in the hospital. “I’m not afraid,” I said, lying through my teeth.

The truth was, I really
was
afraid. I’d been friends with Nell Hawthorne since third grade, and I’d had a crush on her nearly that long. Frankie had been dead right when he’d said everyone knew except Nell herself and Kyle. And Kyle might have known, but chose to ignore it; I wasn’t honestly sure.

When you’ve spent nearly ten years crushing on someone you don’t dare ask out, the idea of asking her out on a date is terrifying. I also knew if I didn’t take the bet, I’d be the laughingstock of the entire football team.

“Fuck. Fine. I’ll ask her out tomorrow.” I hated being pressured into it, but I also knew I’d probably never do it otherwise. “You’ll all owe me a bill by practice tomorrow.”

Frankie and Malcolm both shook my hand, since they were the only ones actually participating in the bet.

I went through practice on autopilot, running the plays and catching the ball without really thinking about it. My brain was running a million miles a minute, by turns planning out what I’d say and freaking about getting it wrong.

By the time I got to school the next day, I was a nervous wreck. It didn’t help that Dad had gotten home from work early and worked me over pretty hard. Practice would be rough today with the bruises clouding my ribs and back, but I was used to it by now. It made me tough, he said. It was for my own good, he said. He was right, in a way, though; it did make me tough.

No tackle would ever hurt as much as his fists.

I had fourth-period western civ and fifth-period U.S. government with Nell, and I was planning on making my move between classes. I’d walk her to her locker and ask her as we exchanged books. I stood outside Mrs. Hasting’s first-floor classroom, waiting for Nell to show up for fifth period. I had to bite on my cheek to hide the wince when Malcolm playfully half-tackled me from the side, driving his brawny shoulder straight into a bruise. I shrugged him off, forcing out a laugh as we wrestled until Happy Harry the Hippy Hall Monitor strolled past, calling out a cheerful “Knock it off, you crazy ruffians.”

Happy Harry was everybody’s friend. He looked like John Lennon, with long shaggy brown hair, a scruffy beard, and round glasses. He’d smoked way too much pot in the sixties and hadn’t ever really left that decade, mentally. He was Principal Bowman’s brother, and was perpetually placid, nice to everyone almost to a fault, and always smiling. He never had to ask anyone anything twice, since even the most hard-ass goth liked Harry.

“So, you’re gonna do it after class, right?” Malcolm asked me in a confidential mutter, flashing a triple-folded hundred-dollar bill between his index and middle fingers.

I reached for the bill, but he danced out of the way. “Yeah, I am,” I said. “Hang out by the our lockers between fourth and fifth period.”

I rubbed my side where a purple-yellow bruise the size of a grapefruit shadowed my ribs and around to my back, the same spot where Malcolm had hit me with his tackle.

Kyle’s voice came from behind me. “Your dad go after you again?”

Kyle was the only person other than my mom who knew Dad beat me. I’d made Kyle promise to never tell anyone, though. Telling wouldn’t do any good, since Dad was the captain of our town’s police force. He’d bury any reports, intimidate any social workers who tried to get in his way. It had happened before. I’d made the mistake of telling a gym teacher in eighth grade that the bruise on my stomach was from my dad hitting me, and the teacher had gone to a social worker. The gym teacher had been transferred to a different district within a week, and the social worker had been fired.

I’d missed a week of school, out “sick.” In reality, I’d been in too much pain to get out of bed. The bruises on my body had taken over a month to disappear. I’d never tried to tell anyone after that. I spent as much time at school, at football practice, or at Kyle’s house as I could. Anything to stay out of Dad’s way. It suited him, since he’d never wanted kids in the first place. I was a disappointment to him, he claimed. Even when I made varsity my freshman year, I was a disappointment. Even when I broke the district record for most receptions in a single season that same freshman year, I was a useless piece of shit. I hadn’t beaten Dad’s record, and that was all that mattered.