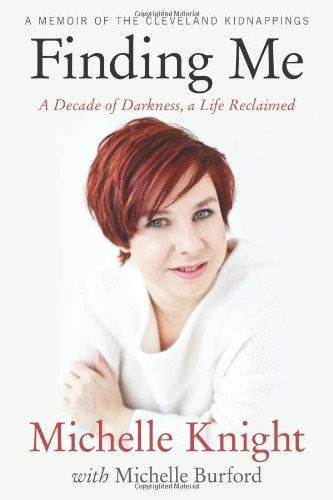 In recounting the events in this memoir, chronologies have been
compressed or altered and details have been changed to assist the narrative. Where dialogue appears, the intention was to re-create the essence of conversations rather than verbatim quotes. Names and identifying characteristics of some individuals have been changed.

All rights reserved. No part of this book may be used or reproduced in
any manner whatsoever without the written permission of the Publisher.
For information address Weinstein Books, 250 West 57th Street,
15th Floor, New York, NY 10107.

Library of Congress Cataloging-in-Publication Data is available for this book.

A member of the Perseus Books Group

T
HE
DAY
I
DISAPPEARED
in 2002, not many people even seemed to notice. I was twenty-one—a young mom who stopped at a Family Dollar store one afternoon to ask for directions. For the next eleven years I was locked away in hell. That’s the part of my story you may already know. There’s a whole lot more that you don’t.

I’ve never talked about the painful life I had even before I was kidnapped. I’ve never revealed why I spoke to the man who came up to me in the store or the creepy feeling I had when we left. I’ve never discussed what really happened between me, Gina, and Amanda inside those walls. Matter of fact, I’ve never told my whole story. Until now.

I’m not the first person to go through an ordeal like this. And every time a big kidnapping case comes up everyone is shocked: Jaycee Dugard, who spent eighteen years chained up in a backyard shack in California; Elizabeth Smart, who was taken from her bedroom in Salt Lake City the same summer I was abducted; Shawn Hornbeck, the Missouri boy who was snatched while riding his bike to his friend’s home; and in November 2013 the three London women who were found after spending thirty years in slavery. These kinds of stories are big news, but when they fade away, it’s easy to forget all the people who are still missing. That’s one reason

I’m opening up my life in this book: I want everyone to remember those who are lost.

And I want to urge you that if you ever notice anything that seems off about a situation—a child who keeps missing school, a woman who doesn’t seem able to leave a house—please do call the police and ask them to check it out. Don’t worry about seeming foolish if it turns out to be fine. At least you’ll have the peace of mind that comes from knowing that you could have helped someone who was in trouble. Please, always take the two minutes to make that call.

I
NVISIBLE—THAT
’
S
HOW
I felt for the nearly four thousand days I survived in Ariel Castro’s hellhole. Every single day all I could think about was getting back to my son, Joey. I wouldn’t have believed this before it happened to me, but I now know that anyone can be kidnapped. Anywhere. Anytime. And on the summer day when it happened to me, not too many people seemed to care. Nobody had a vigil. It wasn’t all over the news. Neither my relatives nor the neighbors got together and put up flyers. The whole world moved on as if I was never even alive. I felt like I was screaming at the top of my lungs, but no one could hear me.

Every person who is lost is somebody’s child. We will never know all their names, but we can still keep them in our thoughts. As I mentioned, we can also speak up when something seems fishy. My eleven years would have been a lot shorter if more people had paid attention and then actually taken a moment to call the cops.

As hard as it has been to look back on what happened to me, it was even harder to live through it. Some of my memories are all over the place. I don’t even know if it’s possible to make sense out of chaos, but that’s what I’ve tried to do. I have probably left out some things, but this is what I recall after being held captive for eleven years. The man who took away a huge part of my life would have wanted me to stay quiet. But that’s exactly why I shouldn’t. Even before I found myself in the wrong place at the wrong time, I felt like I didn’t have a voice. So now I want to speak up for all those missing women and children who still aren’t being heard. I hope there will never be another person who feels like I did for so many years: Thrown away. Ignored. Forgotten.

Yes, I made it through one of the most terrible experiences that can happen to a human being, but most of all, my story is about hope. I might have been chained, starved, and beaten, yet that monster couldn’t totally crush my spirit. Over and over I chose to get back up and keep going. Now I’m going to tell you how I did it.

I
WOKE
UP
EARLY
that morning in September 2013 around 5 a.m. The night before, I could barely even sleep. A whirlwind of thoughts went through my head.
What has Joey’s life been like since I last saw him? What does he look like, now that he’s fourteen? Is he happy in his new home? Is he doing well in school? What does he want to be when he grows up? Does he even know that I’m his mom?

There were so many questions I wanted to ask, so many years I had missed. I really wanted to see my son in person, but I couldn’t—at least not yet. The family who adopted him when he was four was concerned about interrupting his life. I completely understood that, but it still broke my heart.

“For now,” my lawyer Peggy had told me, “they are willing to send some photos of him. But you have to keep them private to protect his identity.” On the morning of our meeting we were getting together so she could show them to me.

Peggy handed me the pages, and I spread them out on the table. There were eight photocopied pictures, four on each page. As soon as I saw the first one, hot tears ran down my face.

“Oh my God, he looks just like me!” I said. Joey had on a blue baseball jersey and wore a cap down over his dark, curly hair. He stood with his bat over his arm. The photo seemed current. He still had that cute button nose, and he looked tall for his age—he must’ve gotten his height from his father, who was six foot. But that big smile, those small ears, and those big, juicy lips? Those things came straight from me. I moved the pictures to the side so the water dripping from my cheeks wouldn’t ruin them. Peggy handed me a tissue.

“Look,” I said through my tears, “he loves baseball the same way I do!”

One at a time, I stared at every picture. In the second photo he looked about seven and was kneeling and wearing a suit. In the next he was mixing some cookie dough in a bowl. “He likes to cook, like me!” I exclaimed. Besides the baseball picture, there was one where he was holding a hockey stick, another where he was wearing a scuba outfit in a pool, and one where he was rollerblading.

“Wow, he must really be into sports,” I said.

Peggy nodded and smiled at me. In every single photo he looked happy. Very happy.

Slowly I ran my fingers across Joey’s face. I wanted to touch him and hug him. Tell him how much I had missed him. But five months after I escaped from my prison with the hope of finding Joey again, this was the closest I could come to him.

When I got home that night, I pulled out the pictures and stared at them again. As I looked at Joey’s bright eyes and big smile, I felt every single emotion a mother who has lost a child can feel. Like regret. Things could have been so different for us. And anger. Why did that bastard have to choose me to kidnap? And also joy and relief. Thank God someone has been taking care of my baby. I tucked the two sheets away in a blue folder, one that I’d already put a butterfly sticker on.

That day in Peggy’s office wasn’t an ending. In a way, it’s where my story begins. I set out searching for my son twice—first when he was only two and a half, and next after we’d been separated for twelve long years. I only hoped that soon I’d be able to give him a big hug once again.

I
WILL ALWAYS REMEMBER
the inside of that brown station wagon—the grimy floor mats and the stink of rotten apples. When I was four that car was where my family lived. Me, my twin two-year-old brothers, Eddie and Freddie, and my little cousin, Mikey, all huddled together in the back of that wagon and tried to stay warm under one small, dirty blanket.

“Scoot over!” Freddie would yell. He was the more talkative of the twins—and the one who usually hogged the covers. He’d curl up his little fist and give Eddie a push. Eddie, who was pretty calm for his age, didn’t really push back. Even though they were identical and had the same olive skin and dark, curly hair, I could usually tell them apart by who was doing the most shoving.

“Stop pushing him, Freddie,” I’d say. Because I was about two years older, that made me the big sister in charge of settling the arguments. “Here, you guys can have some of my covers,” I’d tell them when they’d all start jerking the blanket back and forth. “Just stop fighting.” That would work for about three minutes before they started in again. I loved all of them, even if they did drive me crazy.

On some days my dad parked next to an apple orchard on the outside of Cleveland. We picked our meals right off the tree. I ate green apples until my stomach hurt. “Put these extras in the back so we can have them later on,” Ma would say. She tossed one apple at a time from the front seat back to us. After I caught one, I used it to play hide and seek with little Mikey, who had brown hair and was very skinny.

“Guess where I hid mine?” I’d ask. Mikey would just shrug and grin.