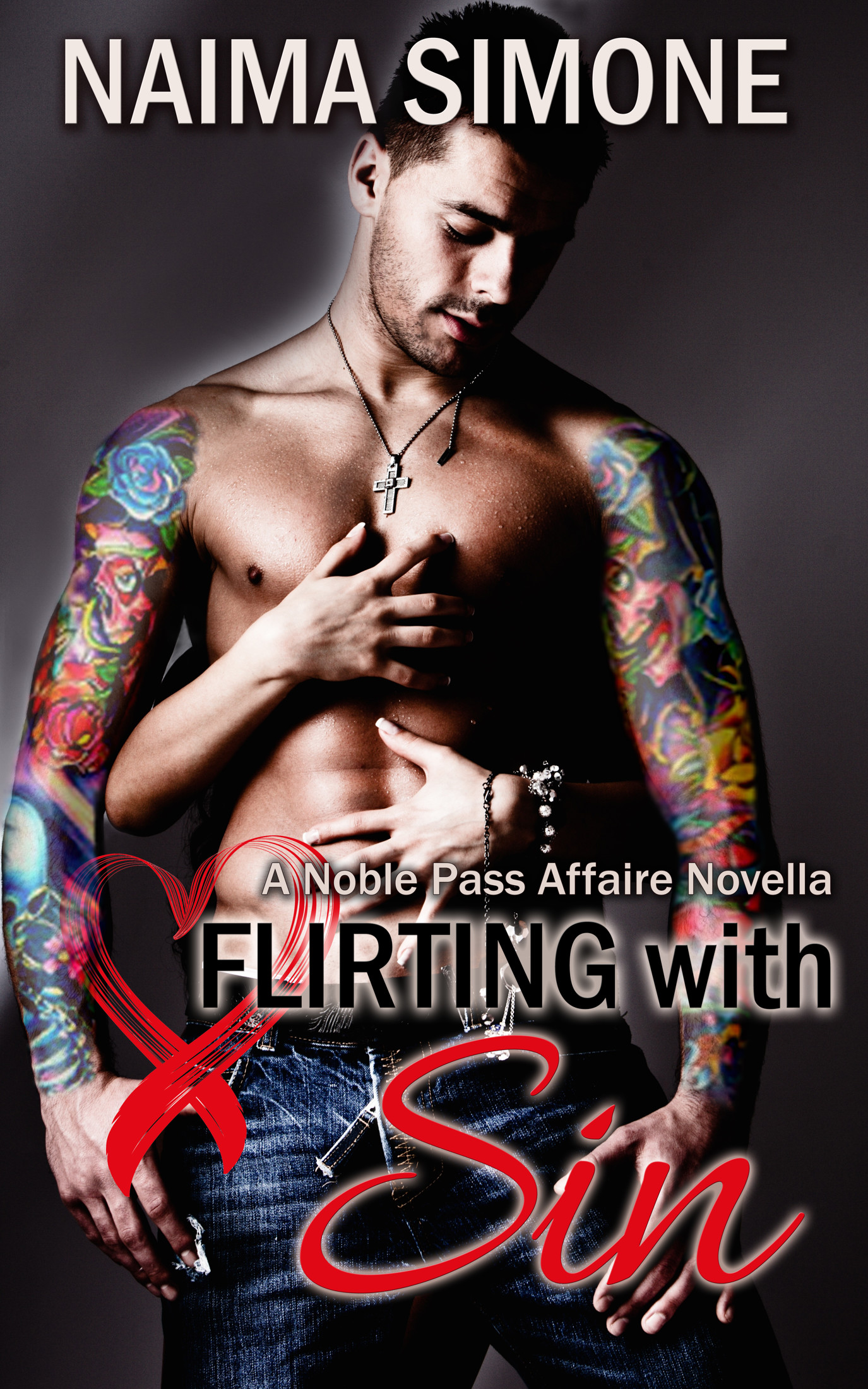 Flirting with Fire by Misty Dietz

Flirting with Disaster by Josie Matthews

Flirting with Sin by Naima Simone

Flirting with Fate by Jerrie Alexander

Flirting with the Devil by Kym Roberts

Other Titles by Naima Simone

Desire in the Dark

Stroke of Midnight, Breathlessly Ever After, Book 1

Bargain with the Beast, Breathlessly Ever After, Book 2

Under His Wings, Dark Judgment, Book 1 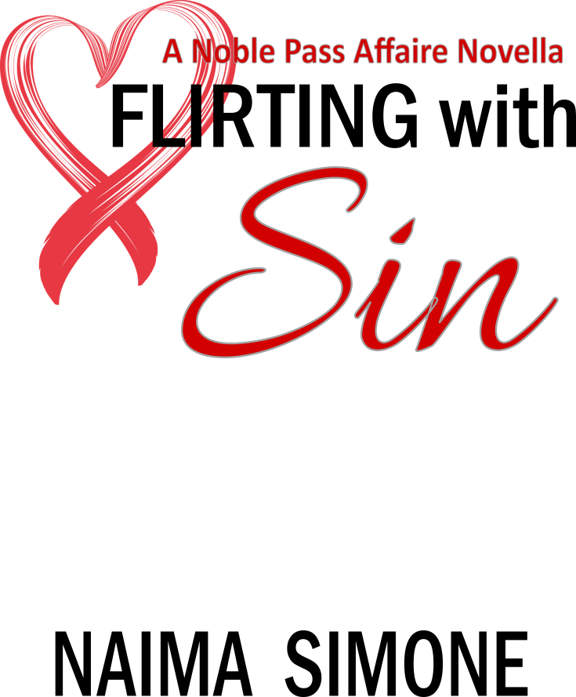 All rights reserved. No part of this book may be used or reproduced, or stored in a retrieval system, or transmitted in any form or by any means, whether electronic, mechanical, photocopying, recording, or otherwise, without written permission of the author except in the case of brief quotations embodied in critical articles or reviews.

This book is a work of fiction. Names, characters, places, and incidents are the product of the author’s imagination or are used fictitiously. Any resemblance to actual persons living or dead, business establishments, events, or locales is entirely coincidental.

First and always, thank you, Father, for your many blessings. None of this would be possible without your gifts, mercy, and love.

To Gary
. You are one of the afore-mentioned gifts. Thank you for supporting and loving me even when the house looks like a State Farm commercial, and when I go into apocalyptic mode. Your patience, calm, and faith are my rocks.

To Debra Glass
. Your enthusiasm and willingness to drop everything has been my lifesaver on more than one occasion. And this time was no different. LOL! Thank you is not nearly enough. I love you! MUAH!

To Jessica Lee
. Those daily phone calls keep me going and energized. Not to mention your insight and wisdom. Thanks for being you!

To AJ Nuest
. I don’t have the words to express how much you mean to me! I must’ve been a saint in a previous life to have been blessed with you! Your knowledge, enthusiasm, insight, careful eye, and your HUGE heart are your strengths and my blessings. Love you SOOOO much!

And to the Chick Swagger crew
. Y’all are my girls and my inspiration. Was there ever a crew cooler than ours? Nope! Still waiting on my pink jacket… And Misty, Kym, Jerrie and Josie—I can’t think of a better group of authors and ladies I could’ve treaded these self-publishing waters with my first time out.

C
hoose a job you love, and you’ll never have to work a day in your life.

Aristotle Sincero’s father had pounded this saying into his head as a child. Back then, he’d accepted the advice as gospel…as he’d once believed and hung on everything Joseph Sincero had ever uttered. But now, as a twenty-seven-
going-on-old-as-fuck rock musician, Ari
assumed the person who’d come up with that golden nugget had either been disgustingly optimistic or drunk. Or high. Maybe both.

Ari passed his guitar to a roadie as he
charged into the backstage area, sweat and
energy from the last of three encores pouring off of him. The frantic cheers and chants of the New York City audience followed him, spiking the adrenaline streaming through his veins like roaring rapids after a flash flood. Hands slapped his back, fists bumped his shoulders, but he didn’t slow, didn’t stop. God, he loved performing. The fans, the
music
—those never grew old. But once he stepped off the stage, he had to keep going. Had to reach the relative quiet of the dressing room before the rush in his blood started to loosen its grip, to ease and fade like a black shirt after too many washes. Because then, he would crash, and nobody wanted to see the lead singer of Sin, one of the most popular rock bands in the world, tired or weary. It was bad for the image.

The mantra ran through his mind, an old reel stuck on an endless loop. Ari picked up his step toward the dressing room, almost racing for it as if his father rode his heels like one of those annoying ass toy dogs. What enhanced and harmed Ari’s “image” was one of Joseph’s favorite topics. Hell, anything having to do with the band topped his conversation Top Ten. Heaven forbid, they have an actual conversation regarding anything, y’know, father-son related.

Nope, not Christ. Just Joseph, though he liked to believe he was God. Or, at least, like his word had come down off a fiery mountain inscribed on two tablets.

“Yeah, Joseph.” Not Dad. Even when Ari’s mother had been alive, Joseph hadn’t been “Dad.” The gardener had taught him how to ride a bike without training wheels. Their chauffer had gotten on his ass the first time he’d been suspended from school. And the same gardener had given him “the talk” about strapping up before sex. His father had been too busy touring the world as the god of rock ‘n’ roll to be bothered with anything as mundane as parenting. And his mother…

The thought of the fragile Laleh tightened Ari’s chest as if a giant fist had breached his ribcage and squeezed his heart.

His mother hadn’t been cut from the strong, durable cloth of motherhood, but at least she’d tried. Joseph hadn’t spared more than a few weeks a year for his sons until his career had died and he’d realized his two progeny could provide his next shot at fame…and redemption.

“You were a little flat during ‘Breathe.’”
Bullshit
. God, he hated it when Joseph fucking nitpicked. “And what is this three encores crap? You play until they’re too hoarse to yell for more. You’re not so big a star you don’t have to give the fans what they want.”

“Leave them wanting, right, Joseph? Isn’t that what you always say?” Jesus, he’d just left the stage. Joseph didn’t even have a, “Nice show, Son,” or a, “Good job.” Just criticisms and complaints.

Ari’s shoulders tautened with the mention of their recording label. If they were calling Joseph, it was for only one thing.
More
.

Joseph shoved a towel into Ari’s hands. “They want to add more dates to the tour and they’re offering more money. Ari, I told you this ‘break’ is a bad idea. I know you guys have been working hard, but you just suck it up and keep go—”

“Joseph, it’s settled.” Ari rubbed the towel over his face and head so hard, skin and hair should’ve come away with the cloth. “We were promised a week off and whatever Darius, Oliver and Liam decide, I won’t be here. I’m leaving on vacation.”

“That’s crazy. And irresponsible. You have a job to do, dammit. And when was the last time you wrote a song? Instead of time off, you should be working on a new hit. Something we can take in the studio.” Joseph stopped in front of the dressing room door and palmed Ari’s shoulder, halting him from entering. Anger and frustration darkened his blue eyes, creased his forehead. “A week, hell, a few days can cost you the edge. Someone new, younger is always nipping at your heels, hungry to steal what you have—”

“Joseph.” Rage, a terrible, caged beast, clawed at Ari’s chest, leaving the inside of his sternum bloody and raw. His father and his “loving care” never failed to elicit this response. Ari could sing and play and write until he resembled a goddamn skeleton, and it would never be enough. Just fucking once, he wished he could be
enough
. “I’m. Leaving.” He pushed Joseph’s hand off his shoulder.

He swallowed the rest of his vitriolic response, shoving past Joseph and throwing open the dressing room door. He’d promised his mother he wouldn’t give up on his father—it was the only reason Ari tolerated him. Until the day she passed away from cancer when he was seventeen, Laleh had loved Joseph, had remained loyal to him. To a fault.

Even though he hadn’t returned the favor.

“Joseph, damn, lay off. The man just got off the stage.” His brother, Darius Sincero and lead guitarist of Sin, sauntered into the dressing room. Green and gold eyes identical to the same pair Ari met in the mirror every morning gazed back at him. With a subtle nod, Darius curled his lip at their father. “Give the man a chance to get a drink in his hand. Hell, go piss.”

His father’s tense voice and Darius’ lazy, insolent reply faded to background noise as Ari slammed the bathroom door behind him. He stripped out of his soaked clothes and dropped them to the floor. The smell of the smoke from their pyrotechnics and his own sweat clung to the material like a stubborn woman. From beyond the closed door, he could still catch the murmuring of his father and brother going at it.

“Shit.” He reached into the shower and twisted the knobs with more force than was probably necessary to drown out the argument. Returning to the sink, he flattened his palms on the basin and leaned forward, his head bowed. “Shit,” he repeated, lower, softer, catching the exhaustion in his own voice.

He should be happy, thrilled, fucking delirious with joy. After all, he lived the goddamn dream. Fame. Money. Women and more women. And then there was the music. From the time he’d been a boy and had splayed his too-small hands over the ivory and ebony keys of his mother’s twelve-foot Steinway, all he’d ever desired was to play. To make music. Other kids, including his brother, had joined the football and baseball teams, and he’d begged and pleaded for piano then guitar lessons. Cooped up in his room, filling spiral notebook after notebook with songs…those were his happiest memories.

Complaining over obtaining his dream—playing on stage just about every night in front of screaming fans—seemed absurd.

So why did he long to run until his lungs burst and his legs collapsed? Why did the thought of one more concert, one more after party, one more award show or red carpet event send shivers tramping up and down his skin like an amateur marching band?

Entranced By Him by Cassandra Harper
The Alchemist's Pursuit by Dave Duncan
Blood & Spirits by Dennis Sharpe
Chilled by Death by Dale Mayer
Homespun Bride by Jillian Hart
All Strung Out by Josey Alden
Towers of Midnight by Robert Jordan
Hooked by Adams, Claire
Love's First Flames (Banished Saga, 0.5) by Ramona Flightner
Edge of Midnight by Charlene Weir