Read For the Love of Gracie Online

For the Love of Gracie 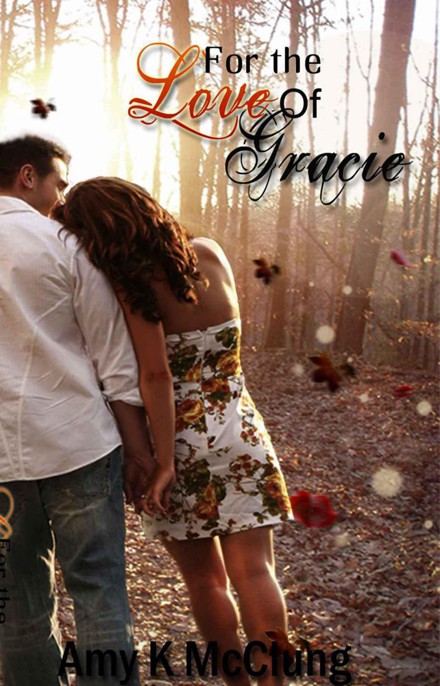 All rights reserved, including the right to reproduce this book or portions thereof in any manner whatsoever. Please respect the work of this author by not copying or reproducing their work.

This is a work of fiction. Names, characters, places, and incidents are a product of the author’s imagination and are used fictitiously. Any resemblance to actual events, places, or people living or dead is coincidental.

The author acknowledges the trademark status and trademark of products or people used in this work of fiction, which have been used without permission. The publication use of these trademarks is not associated with, or sponsored by the trademark owners.

From the outside looking in, it can seem a person has everything they need for happiness. Many unconsciously ignore the age old cliché of 'don't judge a book by its cover'. We don’t all go through life meaning to judge people by looks or stereotypes, though inevitably we all do at some point, whether we realize it or not.

Someone may have several friends surrounding them at all times, yet can feel utterly alone.  Life isn’t always perfect. Regrets are inevitable for most, some are greater than others.  We live life in the hopes that it will be easy and that we will be happy and never have anything bad happen to us.  For some, that is their reality and they are the lucky few. For others, they have to fight for every ounce of happiness in their life.

The delicious smell of waffles
drifted through the air.  "Mmm," I groaned, reaching my arms above my head, stretching my stiff muscles. Placing my feet on the hardwood floor, I flexed my toes, cringing from the cold sensation that nipped at the soles of my feet. My legs lifted back up on reflex. I reached over to the drawer next to the bed and grabbed a pair of wool socks. When I looked down and realized I was wearing socks with panties and nothing else, I felt silly. I chuckled softly at myself.

Hudson's favorite t-shirt was sitting within reach.  It was a black, Five Finger Death Punch, t-shirt that he
had obtained at the only concert of theirs he’d attended. They were his favorite band, and more like an obsession than anything else. It hung loosely on my body, covering me to my knees. My long auburn hair was hopeless at the moment. Bed-head?  Definitely.

Hudson and I had only met a few weeks ago; we
had spent most of our time in bed since. I twirled my hair into a bun and stuck a pen in it to keep it slightly contained. I checked my face in the bathroom mirror. My hazel eyes were shot with red lines from lack of sleep. Underneath my lashes, my skin was streaked where my eyeliner had run from sweating so much.  "Waterproof, my ass," I mumbled, as I cleaned my face. I criticized my reflection, "Gracie Walker, you're a hot mess. It's a wonder someone as hot as Hudson James wants you."

The bedroom door creaked as I
opened it, stopping to let the smell of syrup assault my senses. Hudson James was fantastic at everything, and I mean
everything.
I grinned at the memory of our night spent together.

His tan muscular back was the first thing I saw when I stepped into the kitchen
.
He had a large dragon tattoo over his left shoulder that screamed 'bad boy'. His dark blonde hair was shaggy and I loved nothing more than running my fingers through it. I propped myself against the door frame, staring at him as he worked on waffles. He was softly singing to himself a song by, whom else, Five Finger Death Punch.

His boxer briefs made his ass look so delicious; I just wanted to take a bite out of it. The beads of sweat running down his back, made me suck my bottom lip between my teeth. My heart sped up and my excitement heightened, as I
watched him.  Unconsciously, I let out a low moan. The noise alerted him to my presence.

He smiled as he licked his lips. He turned the oven off and said, "Good morning, hot stuff."
Sauntering over, he placed his hand on my hip, moving my shirt up. His lips slowly met mine as he began to tease me with his tongue and while one hand worked its way down my body to press against my core. His erection pressed firmly against my belly. His other hand snaked up inside my shirt, cupping my breast. Hudson removed his hand from fondling me, only long enough to slide my panties to the floor.

He lifted me effortlessly and set me down on the table. I lay back as he clambered up on the table with me, moving up until we were face to face.  He groaned, "Gracie, girl you make me crazy," right as he plunged into my moist depths.  I moaned again as he began to move, slow at first, then faster as I held on to the edges of the table for support.  He thrust one final time as we both came, shuddering together. He lifted himself up and away from me as I turned to face him and licked my lips.

Hudson
casually picked my panties up off the floor and tossed them at me.

He smirked. "I n
eed to finish breakfast now."

I smiled, "
Sorry didn’t mean to distract you."

He grabbed a handful of my hair that had slipped from the bun
, and gently pulled me in for a kiss, which caused the spot between my legs to ache for him again already.

"Never apologize for what you just did there. And you look so sexy in my shirt."

Hudson and I met at a club a few weeks ago where we were both hanging out with friends.  I had just broken up with a jerk, and it seemed that all I ever dated were jerks. I had never had a really romantic relationship, like the ones you saw in movies. I had begun to think those relationships didn’t exist, but this one seemed like it might be different.

Hudson was standing across the club and our eyes met.  He strolled over to me and used a cheesy pick up line to get my attention. "Hi, my name is Milk. I'll do your body good."

My response was beer coming out of my nose from laughter. Apparently, that was a turn on for him. Two hours later, we were in my car making out, his hand was up my shirt and he was quickly on his way to second base.

Since that night,
I had practically been living at his place. I had my own house, but we hadn’t kept our hands off of each other long enough for me to go home. Hudson pulled me from my thoughts when he brought a plate of waffles to the table.  I slathered butter and syrup on them and began shoving forkfuls into my mouth.  He laughed heartily, "Damn, Gracie.  You hungry?"

I smiled
, my mouthed stuffed with food, and said “Sorry, I worked up an appetite."

He chuckled and said, "
As long as you don’t get fat, eat as much as you want."

Ouch, that was the first crude thing he'd said to me. The thing was, I used to be overweight and hated my body.  His words made me put the fork down and wipe my mouth. "That was rude," I said.

Hudson snickered, "What? I like your body the way it is. That's a bad thing?"

I scoffed, "Next time, say it a little nicer."

He shrugged it off as no big deal.

The song "Whip it" interrupted the moment.  I reached for my phone, but Hudson grabbed it first.  He glanced at the name. "Who's Cam?"

I snatched the phone from him. "That's Cameron."  I answered before he could say anything else, "Hey Cam, what's up babe?"  I giggled and Hudson's jaw clenched.  Strolling out of the room, I plopped myself down on his couch, and continued my conversation with Cam, ignoring the glares I was getting.

After thirty minutes of torturing Hudson, I got off the phone. "I'm going to go grab a shower," I said, as I moved toward the bedroom.  He grabbed my arm, yanking me back to him. "Ouch, let go of me."

He released me and said, "Sorry, didn’t mean to pull so hard.  Who's Cameron?"

With my hands on my hips, I said, "My best friend."

He sighed with relief. "So it's a chick?"

I shook my head. "No, he's a guy. We've been friends since we were kids. What's the big deal?"

"The big deal is I don’t like you talking to other guys like you just did," he said, with a note of anger in his tone.

I laughed, "Are you jealous?  After what we just did, you think you have something to worry about? That’s too cute."

He grabbed my hand when I went to pat his cheek.  He twisted my wrist roughly and I cringed in pain as he laughed.

"Not so cute now, is it. Get a shower and we'll talk about this when you get out." He shoved me toward the door and walked away.

What the hell was that?

For the first time, Hudson's behavior scared me, slightly.  He didn't normally act so erratic.  I'd only known him a few weeks; he'd always been pretty charming though.
I was to blame for how he reacted; I should have explained who Cameron was instead of trying to egg him on.

Cameron and I had been friends since we were five. We met in kindergarten and hit it off right away. We used to get into trouble for talking during nap time. One time, we got in trouble because we shared a mat. He told the teacher that he had to protect me because I didn’t have a daddy. The teacher thought it was sweet, but still separated us.

In grade school, there was rarely a moment you didn’t find us together. My mom let him sleep over every weekend until we were twelve and then worried about puberty and inappropriate things. Cameron ‘came out’ to me when we were in high school. By then, I was totally in love with him. What girl didn't fall in love with her best guy friend?

It had crushed me that he wouldn’t ever return my feelings, but I never felt any different about him.  Deep down, I always knew he was gay and I was sure he knew it too. I felt honored that I was the first person he had trusted to tell. He had it rough though. His parents were supportive and encouraged him to not be afraid to be himself. The encouragement was great for family life, but when he came out at school, he was bullied by a lot of girls and guys.

We had a close group of friends, and we did our best to protect him from the bullies. Unfortunately, there were a few times that the bullies got the best of him. He had taken more than one beating during our high school years. Once we got into college, things got a little better for him.  We took turns between the gay bars and the straight bars each weekend so that everyone felt included in our group.