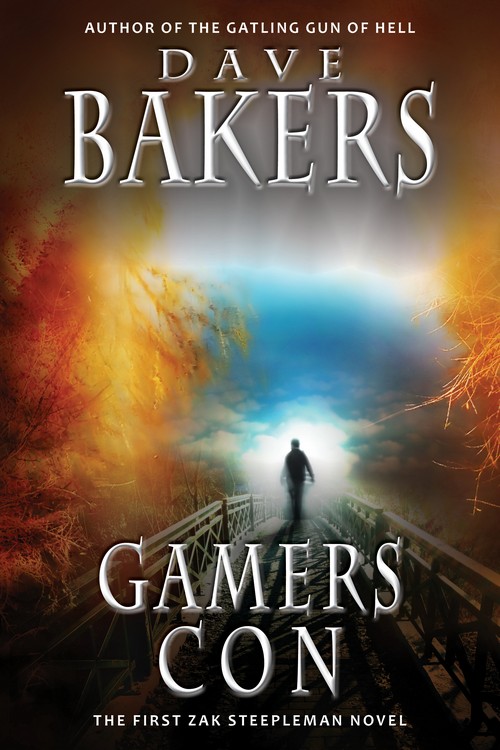 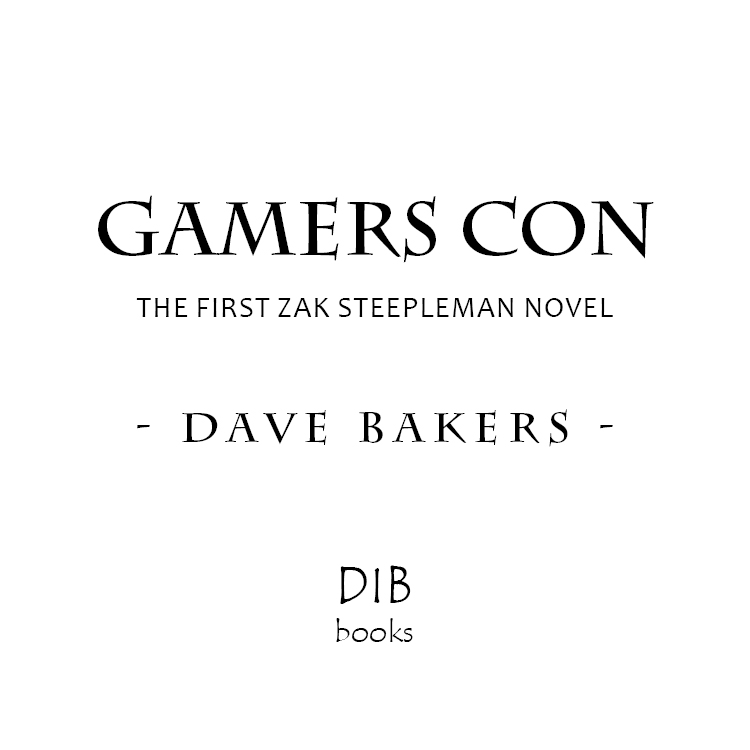 This work is fictional. None of the characters or events depicted in this book are based on real life and any resemblance to real events or persons is purely coincidental.

Neither this book, nor any part of it, may be reproduced without express permission from the publisher.

Echoes of the Undone

Getting into the Game

The Gatling Gun of Hell

For a limited time only when you sign up for Dave Bakers’s email newsletter you will receive a free copy of
Getting Into The Game
— a Zak Steepleman short story collection (plus other great free stuff!) — in your inbox. 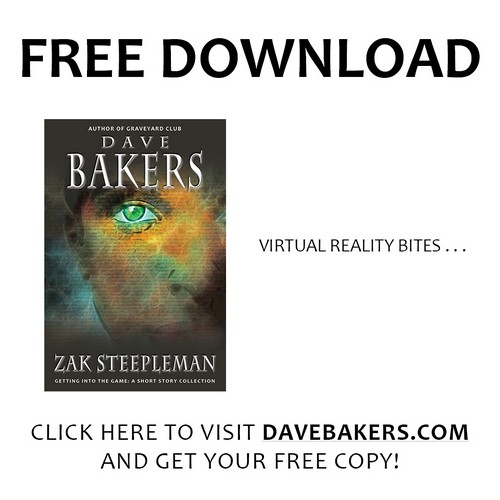 THOUGH PRETTY MUCH everything was set in shadow, it was easy enough to see the archways springing up all around the circumference of the room. They coiled up around into swirling spirals before sweeping back down again to the floor.

Just about everything was marble—and it had that jet-black colour to it.

A pool of dark purple flecked with seemingly thousands of glinting, microscopic stars, occupied the middle of the place. It spun away at a steady pace, like a whirlpool, almost.

What illumination managed to penetrate the hall came from the dark-purple pool, setting everything in its ever-shifting silvery glow.

A cloaked figure emerged from the shadows. He held his arms down at his sides and appeared to almost float across the marble floors. His face remained steeped in shadow.

When he reached the rim of the purple pool, the Cloaked Figure stared down, long and hard, into it, as if struck with some deep thought of his. It was only when a voice called out from the shadows that the figure turned away from the pool.

Looked off behind him.

A boy, with blazing-red hair and pox-white skin, emerged out of the shadows.

He looked somewhat out of place here, in this dark landscape . . . which was to say that he was wearing a pair of light-beige cargo shorts—which exposed his knobbly knees—and he had on a bright-yellow t-shirt which read, ‘Santhers Crossed’ in bright-green lettering across the front.

The way he walked, too, seemed just about the opposite of the Cloaked Figure, who now stood with his back to the purple pool. The boy kind of minced his way along with a sort of pigeon-toed step, the way that he seemed to rise about an inch or two with every stride.

He wore leather-strapped sandals with white socks on underneath.

And his footsteps slapped loudly as he approached the figure.

As the boy drew closer to the Cloaked Figure, his expression was dour. “I’ve done it, sir,” the boy said, his tone deadpan.

The Cloaked Figure stared at the boy. He didn’t reply or so much as flinch.

The Cloaked Figure made no reply.

The boy looked down at his sandaled feet. He absentmindedly scuffed the toe of his sandal across the sleek,
black
-marble floor.

It made a high-pitched
squeak
.

The Cloaked Figure still said nothing in reply.

He just kept on staring, apparently, at the boy.

The silvery gleam from the purple pool continued to set the two of them in an oddly flickering glow.

His voice
boomed
, echoing about the hall.

“Did you bring them back?” the Cloaked Figure said, his voice sounding at once weary and booming . . . filling out the whole of the hall.

The Cloaked Figure continued to stare holes in him. Apparently
would not
look away. “You were supposed to bring them
back
with you.”

The frown lines in the boy’s forehead grew even deeper, and, very slowly, his mouth formed an ‘oh’ shape. His eyelids fluttered upwards till they showed off his eyeballs for anybody who cared to see: communicating, effortlessly, True Terror.

The Cloaked Figure smouldered away in silence.

Thinking over his response.

Then the Cloaked Figure said, “Yes, I imagine you are telling the truth.” He paused for a few moments. “Sometimes . . . sometimes I forget where
here
is and where
there
begins.”

I GENTLY SLAPPED the plastic grip of the control pad against my bare thigh. Watched my lardy thighs jiggle, kind of like watching a tsunami happening in miniature scale.

Just like the kid in the game, I was wearing cargo shorts—who wouldn’t, what with it being thirty degrees Celsius out?

Even in my bedroom, with the window wide open, the sound of traffic from the main road which runs past my house thick in the afternoon air, I couldn’t help but sweat all over the place.

I reached down for the bottle of iced water I kept propped up against the wooden end of my bed, savoured those few moments of the coolness against my skin.

And then I whipped off the screw cap and poured the contents down my throat.

Felt it wash away that stale taste in my mouth.

As I propped the bottle back down on the carpet, I breathed in the gentle smell of leaves, mixed in with the odour of the car exhausts, and I couldn’t help but sigh out a little contentedly.

And, in approximately five minutes, I’d be heading off to Gamers Con—the biggest event in the whole of the UK, if not Europe too.

A solid long weekend with nothing but gaming competitions, fast food and sleeping in.

But this was the pinnacle.

When I turned my attention back to the TV screen, I saw that it was fading to black. That the cut scene which had seemed to go on for about an hour or more—okay, maybe I’m exaggerating just a tad—had finally wrapped itself up.

And I didn’t even get to see how it had ended.

In fact, all that I caught as the screen dissolved into complete darkness was the Cloaked Figure standing there in the hall, standing before that dark-purple pool.

Just as I prepared myself to return to the
actual
gameplay, I heard my dad calling me from downstairs. Telling me that it was time to get off to Gamers Con.

. . . Now, ordinarily, I’m pretty reluctant to lever myself up off my bottom for whatever reason I’m being
compelled
to leave the house, but, in this case, I knew that I was heading to the greatest place in the world . . . so how could I
not
get just a little excited?

So, moving just about as fast as I could, I unplugged my Sirocco 3000—my games console—and then set about taking it apart, slipping it into its nicely padded carry case . . . the one that I’d received in the post a couple of weeks back along with my official invitation to Gamers Con.

Just as I was on the point of zipping the case up, I remembered something.

Something that I would’ve scolded myself for later if I’d overlooked it.

Working quickly, knowing that—with getting to Gamers Con on the line—I really had no time to waste, I bashed the Eject button and pulled out the disk inside.

It was a simple DVDR, one of those that I often get from game developers, especially around this time of year with Gamers Con on the horizon . . . all these game developers that want me—
Zak Steepleman: Aspiring Pro Gamer
—to stop by their booth and check out their latest work.

Because, after all’s said and done, it’s people like me, those who want to make their living playing games, who are the developers’ bread and butter.

And I’d found—from experience—that my main sponsor, Alive Action Games, who’d sent me this game, had more intense developers than most.

I glanced at the green felt-tip pen all scrawled onto dotted lines on the metal-grey disk: the words which read, as far as I could make them out:
Halls of Hallow
.

I gave a shrug, thought about tossing it right into the bin . . . it was only a good throw away from me . . . but then I spotted the featureless case it had come in and decided to put it back inside.

A Boy Called Cin by Cecil Wilde
The Taken by Inger Ash Wolfe
The Blazing World and Other Writings (Penguin Classics) by Cavendish, Margaret
Death of a Nationalist by Rebecca Pawel
Book of the Guardian 3: The Last Mission by Ben Winston
Brides of Iowa by Stevens, Connie;
Close Out by Todd Strasser
59 Seconds: Think a Little, Change a Lot by Wiseman, Richard
Grease Monkey Jive by Paton, Ainslie
Quicksilver by R.J. Anderson