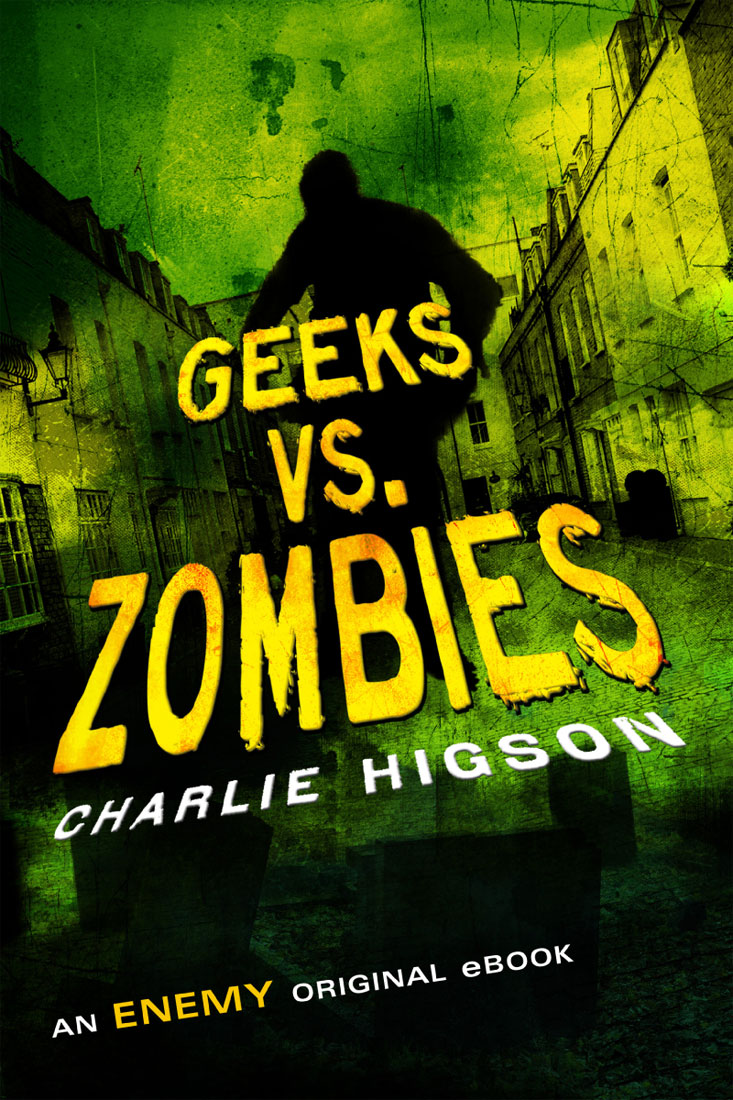 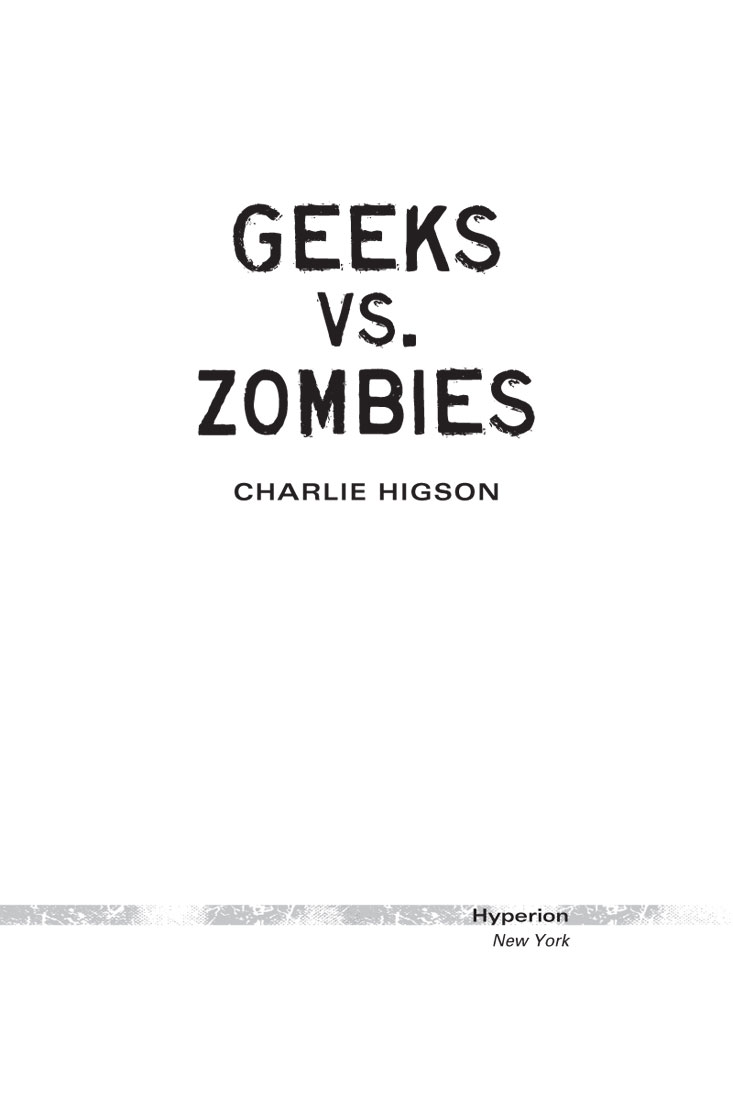 All rights reserved. Published by Hyperion, an imprint of Disney Book Group. No part of this book may be reproduced or transmitted in any form or by any means, electronic or mechanical, including photocopying, recording, or by any information storage and retrieval system, without written permission from the publisher. For information, address Hyperion, 114 Fifth Avenue, New York, New York 10011-5690.

The Sacrifice
âthe next thrilling installment in the Enemy series

“I thought you were supposed to know everything,” James sneered. “You're Wiki, the walking Wikipedia. Wiki, the little boy with the big head like a bulb. Stuffed full of useless facts. And you don't even know what date it is.”

James swore at Wiki and laughed in his face. “I might have known it was Chris Wanker's idea.”

“So you won't be coming, then,” said Wiki's friend Jibber-Jabber, who'd earned his nickname because of his habit of talking too much. He was trying to keep a lid on it now, though, in the face of James's mocking laughter.

“Coming where?” said James with mock politeness. He was a good two years older than Jibber-Jabber and Wiki and slightly chubby, with untidy hair and a very sarcastic attitude. He had always reminded Jibber-Jabber of one of the guys on the TV show
Top Gear
.

“We're going to try and stay up all night reading books.” Jibber-Jabber sensed that he hadn't impressed James with this idea, and now, instead of shutting up like he should have done, he started to blurt things, which he always did when he was nervous. “It should be good,” he said. “We've got loads of books, which we've piled up on the big table, and we've collected all these, like, candles, and we're going to dress as our favorite characters from books, and Chris is going to read to us fromâ”

James cut him off. “That sounds like a riot,” he said with as much sarcasm as he couldâwhich was quite a lot.

Jibber-Jabber shut up. Wiki stared at his shoes. James looked at the two of them like they were five-year-olds, and slowly shook his head.

They were standing in the large courtyard at the Natural History Museum. It had once been the staff parking lot, back in the days before the sickness had come and the world had gone crazy. Now the kids who lived at the museum used it for their own needs. Surrounded on all sides by tall museum buildings, it was safe and secluded. There were two large chicken runs, an area where they piled up their rubbish, a makeshift soccer field, a basketball hoop, and an old Tesco delivery truck parked at one end.

Wiki and Jibber-Jabber knew what was on the truck. Three diseased adults, chained up like animals. An older boy called Paul looked after them, and James had been helping him feed them when Wiki and Jibber-Jabber had come over with their clipboards and asked if he wanted to get involved in their event.

James was one of the Scientists, a group of kids who were using the facilities at the museum to try to find out about the sicknessâwhat had caused it, how it worked, and whether there might be a cure. He wore a white lab coat in an attempt to look the part. It didn't work. He looked more like a boy playing doctors and nurses than a real scientist. He might have been rehearsing for a school play. It was the same everywhere: kids were pretending to be grown-ups, filling their shoes. With no real adults around, it was the best any of them could do.

The disease had killed nearly everyone over the age of sixteen. They were the lucky ones. The unlucky ones lived on, like the three sickos on the truck, so ravaged by disease they were no longer really human at all. Their bodies were rotten with decay, their brains turned to mush. They were animals, motivated simply by killing and eating. The younger kids were scared of the truck. It was a forbidden place, the bogeyman's truck, a box of dark secrets.

“Do you think Paul will want to come to the World Book Day all-night reading vigil?” asked Wiki, sounding lame even to himself.

James laughed again. “I doubt it,” he said, “but why don't you ask him yourselves?”

Wiki glanced at the truck. It was caked with dirt and bird droppings, but you could still see that it was blue and white and plastered with supermarket logos. It hadn't moved for over a year. The tires were deflated. It sat there like a beached whale, or a dead dinosaur. Just another huge fossil like the ones inside the museum. The relic of a lost world.

“Is Paul on the truck?” asked Jibber-Jabber.

“Course you're scared.” James leered at him. “Scared the sickos are going to get you. Going to snap your scrawny bones and eat your guts for breakfast.” James did a horribly accurate impression of a sicko, lumbering toward the smaller kids, tongue lolling out, eyes wide and unfocused.

“How about I chuck you in there and we have a little game of Geeks versus Zombies?” James laughed.

“Well, technically speaking, they're not zombies, are they?” said Wiki. “They haven't exactly died and come back to life, have they?”

“Yes,” Jibber-Jabber agreed. “They're not
literally
zombies, they're just diseased.”

“Maybe,” said James. “But from the way they behave you'd think they'd spent their whole lives studying old George Romero films. And now we're all in one big movie togetherâ
Night of the Living Sickos
.”

“And while we're on it,” said Jibber-Jabber, “we're not geeks, either.”

“Yes, you are. You're textbook geeks. All you lot who hang about in the library.”

“Well, actually, technically speaking, we're not,” said Wiki. “A geek was a performer at American freak shows and fairs who used to entertain people by biting the heads off chickens.”

“Okay, smart-ass,” said James. “But you
are
geeks, though, aren't you? You're nerds, freaks, dorks, wimps, noobs, nerf-herdersâ¦I could go on. So, yeah, okay, technically you're not geeks, not literal geeks, but to me you
are
and always will beâ¦
geeks
.”

“It's the same with you,” said Jibber-Jabber.

“Well, you're not
literally
an asshole, but to me you
are
and always will be one.”

“All right. Come on, then!” James pushed the shutter up at the back of the truck and jumped on board, daring Wiki and JJ to follow. “Prove to me you're not geeks.”

Wiki hesitated a moment, then climbed up after him.

“Visitors!” James shouted, and Paul emerged from behind the heavy black drapes that hung across the back of the truck, hiding its interior. He looked angry, and unhappy about being interrupted.

“They want to see the sickos,” said James in a singsong voice.

“No we donâ” Jibber-Jabber cut himself off, not wanting to look like a wimp. Paul glared at him. He was tall and very thin, with long spindly arms and legs, very black hair, and a very white face above his black turtleneck sweater.

Paul didn't look very well. His skin was shiny with sweat and his eyes were red-rimmed and zigzagged with broken blood vessels. He looked like he might have a fever. Whatever was up with him, he was in a foul mood.

“Did you
actually
?” said Paul.

“A group of us are going to stay up all night reading books.”

Paul gave a brief harsh bark of laughter. If the two boys had thought it was bad being laughed at by James, this was much worse.

“We're seeing if anyone else wants to join us,” Jibber-Jabber added, not looking at Paul.

“Yeah?” Paul stared him down. “My sister was killed the other day.”

“And nobody around here seems to care. You're all too busy having fun. Celebrating World Book Day.”

“You all just carry on as if nothing has happened,” said Paul bitterly. “Having a party, are you? Yeah? Staying up all night reading books as if Harry bloody Potter was still around. Well, something
has
happened. A big fat dirty sicko killed my sister and you want me to ponce about reading books.”

“Books can be helpful,” said Wiki. “You can, you know, see how other people cope with things. Learn stuff.”

Paul suddenly grabbed Wiki and Jibber-Jabber and shoved them through the drapes. There was a cage on the other side, dimly lit by a windup camping lamp that was hanging from a hook.

Its light fell on three grown-ups dressed in rags who were sitting in their own filth chained to the walls of the truck. The smell was appalling. Wiki covered his mouth and tried not to gag. Jibber-Jabber had gone very pale. These days, cooped up in the safe confines of the museum, they hardly ever saw any sickos anymore. And certainly it was a long while since they'd been this close to one.

The grown-ups, two fathers and a mother, were gray-faced and lumpy with boils and blisters. They were so thin, their flesh so shrunken, they looked like corpses, their skin pulled tight over protruding bones. They sat very still, staring, unblinking, at the newcomers.

One of the fathers had a leather muzzle strapped over his face; thick yellow dribble was spilling out the bottom of it. James noticed Wiki looking at him.

“That's Simon Foul,” he said. “Simon likes to bite. We don't let him anymore. That one there's called Louis Corpse, and the mother's called Cheryl. After Cheryl Cole. They're our very own
X Factor
judging panel. The three sickos.”

Cheryl opened her mouth wide and let out a long bubbling gurgle. The few teeth she had left were brown and rotten, most of her hair had fallen out, and her head was studded with growths, as if someone had shoved marbles beneath her skin. As Jibber-Jabber watched, she put a hand up to scratch one lump and tore the top off it, releasing a little flow of bloody pus. She put her hand down to the floor and it squelched into a freshly deposited turd.

Wiki couldn't hold it back any longer. He leaned over and threw up into a bucket that had conveniently been left at the side of the cage.

“Oh, thanks,” said James. “As if it didn't stink enough in here already.”

Paul grabbed him and pushed him up against the bars.

“This is real,” he hissed. “This is the fantastic new world we live in. How are your books going to help me deal with it? If this lot got out, all they'd want to do is chase you down, kill you, and eat you. Nobody writes books about grown-ups eating children, do they?”

“Wellâ” said Jibber-Jabber, but before he could say anything else, Paul cut him off.

“What have you got up there in your library that I might enjoy?” he said, letting go of Wiki. “
The Famous Five
?
Guess How Much I Love You
?
The Very Hungry Caterpillar
? Oh yeah, I'm going to come to your World Book Day event. I need to get some new bog paper.”

“What about
The Famous Five Zombies
?” said James, sniggering. Paul glared at him.

“
The Very Hungry Sicko
?
Guess How Much I Want to Eat You
?”

“You think this is funny?” Paul snapped, and James looked sheepish. “You think this is all a big joke? A bastard sicko killed my sister. You don't none of you care. You go and hide away in your books, hide from the real world, hide from all this!” He smashed his hand against the bars and the three sickos looked up. The mother reached out toward Wiki, who jumped away from her.

Now Paul spoke very quietly, though every word was clear. “Let's all laugh at Paul, shall we?”

“Nobody here understands,” said Paul, who seemed on the verge of tears.