Read Girl of Mine Online 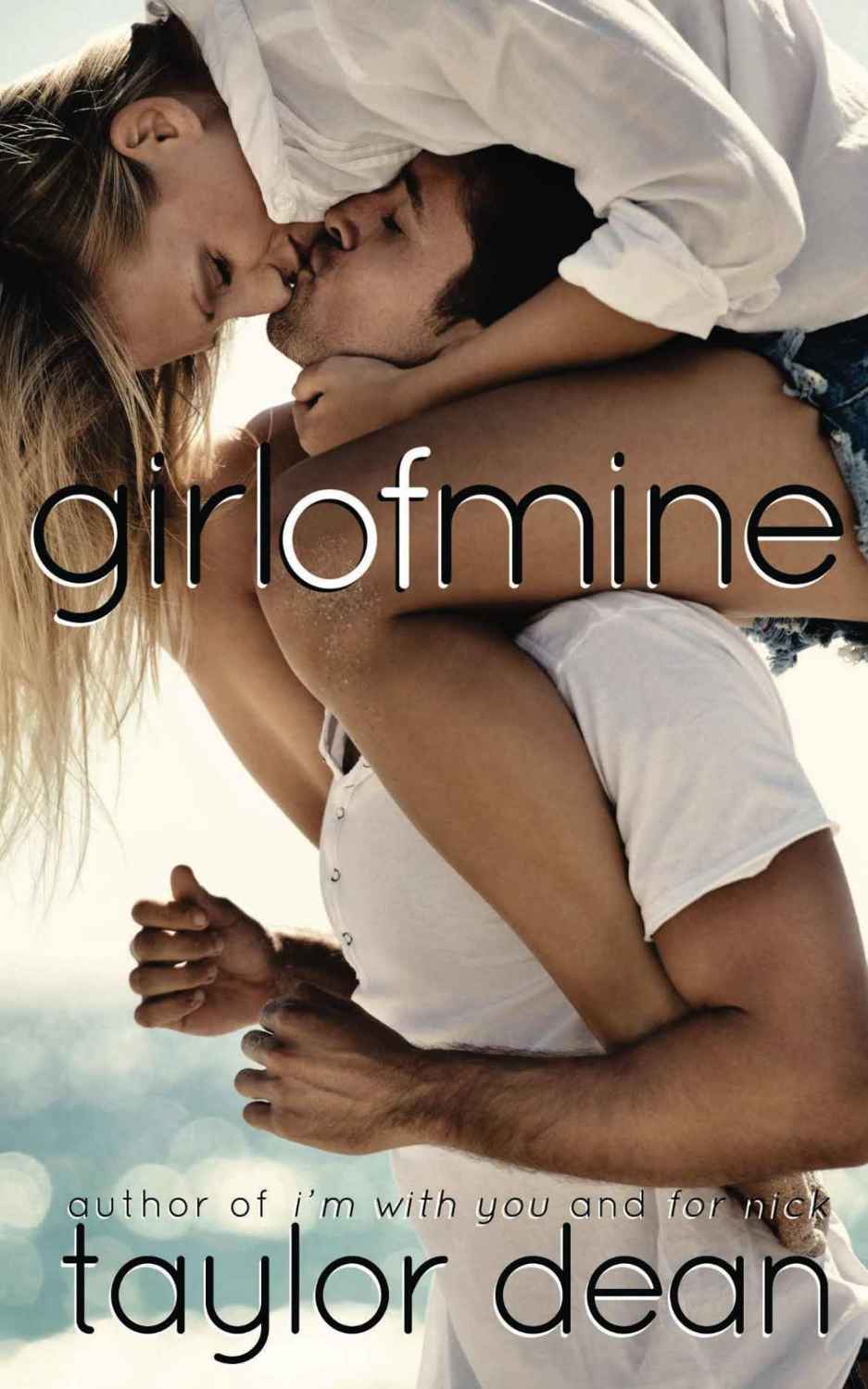 This is a work of fiction. Names, characters, places, and incidents either are the product of the author’s imagination or are used fictionally. Any resemblance to actual events, locales, organizations, or persons, living or dead, is entirely coincidental.

All rights reserved. No part of this book may be used or reproduced in any manner whatsoever without written permission, except in the case of brief quotations embodied in critical articles and reviews.

“To love another person is to see the face of God.”
-Les Miserables

On September 11th, 2001, the United States experienced a brutal act of terror. This led to US troops being deployed overseas to conduct combat operations.

In early 2003, communication was somewhat different from what it is today. There was no Skype or Twitter. Texting was relatively new and overseas cell service was very expensive. Many military units advised soldiers not to bring their cell phones when they deployed.

For a soldier going off to war, communicating with their loved ones was left to email (when they were able to find and use a computer that had connectivity to the Internet), waiting in long lines to use pay phones, or of course, snail mail.

Some soldiers had as little as three days to prepare to leave their families; some had as much as a month. Many soldiers were plucked from their current units and assigned to other units in order to meet the demands of the military.

They were sent to various US military bases to prepare for deployment overseas. Most soldiers thought they’d be at these bases for a relatively short time, but the actual wait varied from a few weeks to several months before leaving US soil. Without a cell phone, or cell service for remote sites, often the only phone communication available was through some very old payphones near their barracks.

My husband was one of the soldiers sent to Iraq during the invasion. When he left, our oldest daughter was about to graduate from high school. Shortly thereafter she left for college.

It never crossed our minds that when he returned our family would never be the same again. (In GIRL OF MINE, life will change drastically for Luke as well.) Soldiers miss so much when they are gone, moments in life that can never be recovered.

In the beginning, communication was intermittent. We were thankful for every little scrap of contact. This was, by far, the hardest thing about sending my husband off to war. The utter lack of communication, the not knowing, was killing me.

As instructed, my husband left his cell phone at home when he deployed. While Stateside, he found a lone pay phone at an abandoned old barracks site—over a mile away from the long lines at the pay phones near his barracks—and that’s where he walked to call me as often as he could, using a calling card.

Eventually things settled down. Months later we were able to communicate daily via email and sometimes with a SAT (satellite) phone. We were lucky.

It was with this experience in mind that I wrote the logistics of GIRL OF MINE. It doesn’t relate to what soldiers experience nowadays, depending upon their situations, of course. I can’t speak for every soldier.

Although this story is not specifically about the war, I give special thanks to my hubby for his invaluable knowledge of the war in Iraq and the enlightening stories he was able to come home and share with me. And now you have the privilege of hearing a few of those stories. Just a few though, because, well, that would be another book altogether—and
this
is a romance novel.

Most of all, hubby, thank you for coming home.

Heartfelt gratitude goes to my daughter, Jaclyn, a graduate of the French Culinary Institute in New York City (now the International Culinary Center), for sharing her knowledge of the culinary arts.

I would also like to express my appreciation to Air Force Captain Travis Burns for sharing his aeronautical knowledge. Thanks for helping me “get it right!”

Also a huge thank you to Air Force Captain Rachel Taylor for sharing her knowledge on the art of running.

“Gotcha,” a deep voice said, startling her. From behind, strong arms reached around her waist and grabbed her in a vise like grip.

“Don’t scream,” the voice said, which only caused an immediate shout for help to gurgle in Jill’s throat as her natural instincts kicked in and she struggled to escape her attacker. The unexpected assault left her heart racing and adrenaline pumping. Her mind had been lost in mundane thoughts and she’d been oblivious to her surroundings. She quickly switched gears and reacted to her assailant, all at once fighting like a wild cat.

It was true that your life passed before your eyes in moments of extreme danger. So many things sped through her mind: falling in love for the first time, the giddiness of romance, then stumbling through overwhelming heartbreak, and finding the strength to move on and rebuild.

She still had so much life to live.

In spite of everything, she wanted to live; to experience everything life had to offer. The cosmic yearning took her by surprise. She hadn’t exactly embraced life lately.

A crowded Walmart parking lot seemed an unlikely place for an abduction. Right? Especially in broad daylight in the late morning on a quiet Friday. All she had to do was kick, fight, and scream. Get noticed. Be the victim that caused too much trouble. Someone would come to her aid.

“Let me go!” she screamed as she attempted to twist and wiggle free from her sudden aggressor. She certainly wouldn’t make this easy for him.

His arms, however, remained locked around her mid-section, firm and immoveable. In her peripheral vision she noticed a few people stop and stare.

Jill was ready to make a scene. A huge one. Hoping to
not
see the proverbial ski mask, she whipped her head around to get a good look at her captor. That was important. If she could identify him, maybe he’d give up and run away. A bad guy didn’t like to be recognized. Otherwise she’d be able to single him out in a lineup.

However, when the shocking recognition dawned, she froze.

“Luke?” she whispered. What on earth was he doing? They were practically nose to nose, breathing in each other’s breath. For a heartbeat, neither one moved. The close proximity made her want to bury herself in his embrace. Then his arms tightened around her, not in a good way. He was ensuring he had a good grip.

Jill writhed in his arms, almost hysterically, grunting from the effort.

This
man spelled danger. He had the power to leave her breathless in a matter of seconds. Jill found herself wishing her captor was some creepy jerk she could pound to a pulp. It would be nice to release every ounce of aggression bottled up inside with no remorse whatsoever.

Instead, the situation was so much worse. This was the man she loved with all the strength she possessed.

Indignation at his actions took over. “Lucas Graham, let me go this instant!” How could he do this to her?

How dare he do this to her.

Not really true. She wanted Luke so much, the very thought of him caused actual physical pain.

Luke picked her up off the ground as if she weighed nothing. His truck was parked directly next to her car. Lost in thought as she’d been, she hadn’t noticed. As a matter of fact, his truck was so close all he had to do was turn around, walk a few steps, and heave her upwards into his front seat, his car door already opened and waiting.

Good job, Jill.
If she’d been more observant, she would’ve seen him waiting for her and run the other way. Knowing Luke was back in town had left her feeling a little dazed.

He stood on the runner, leaned into the truck and pulled the seatbelt across her lap, clicking it into place. Her hands frantically fought his, but he continued with his task as if her efforts simply equated to swatting at an annoying fly.

“I’m not going anywhere with you. Stop it!” Jill yelled.

With his head only inches from hers, he said, “I beg to differ.”

The sound of his voice sent a tremor through her body and her heart softened. She’d missed him so much. He, however, appeared resolute, the set of his mouth firm and determined.

At that moment, she noticed the handcuffs hanging from the handle of the glove compartment. Before she could protest, Luke quickly snapped one end of the handcuffs onto her wrist with practiced ease. The click of the cuffs rang out with finality in the tight confines of the cab.

“Insurance,” he said with a raise of his eyebrows, a slight indication of his usual humor.

“I’m not laughing,” he said, his lips the closest they’d been to hers in a month. The memory of his kiss was still fresh—and raw—in her mind. Luke briefly paused as his thumb ran over the angry red scar screaming across the palm of her hand. For just a moment, emotion glittered in his eyes, intense and fiery, making Jill gasp. He was utterly serious. This wasn’t a joke and he wasn’t messing around.

He locked the door and slammed it shut. It was that easy. In less than a minute, a man had captured her and rendered her helpless. The thought scared the life out of her. And it wasn’t just any man, it was Lucas Graham.

Thank goodness it was just Luke.

Immediately, she retracted that thought. Luke was the one man in this world she did
not
want to see.

Why? Because he was the one man in this world she
most
wanted to see.

No one in her life had ever hurt her as much as he had. The mere thought of him had the power to bring her to her knees in despair.

Was this really the way he wanted their relationship to play out?

Act, Jill. Do something. Fight.

Jill awkwardly reached her left arm across her right, her fingers stumbling over the window control. “Open! Open!” she screamed.

The window mechanism was locked.

“Just taking my fiancée on a surprise weekend getaway,” she heard Luke say to the dazed onlookers, charming them with his easy smile. He was in the car, ignition on and backing out of the parking space within seconds.

Jill turned in her seat and banged on the window desperately. “Help! Help!”

Horse Fever by Bonnie Bryant
Wee Scotch Whisky Tales by Ian R Mitchell
The Sex Lives of Siamese Twins by Irvine Welsh
Noche by Carmine Carbone
Strip the Willow by John Aberdein
Confession by Gary Whitmore
Trickle Up Poverty by Savage, Michael
1 Death of a Garden Hoe by Gale Borger
SHK by t
Sweet on You (The Bridesmaids Club Book 4) by Leeanna Morgan