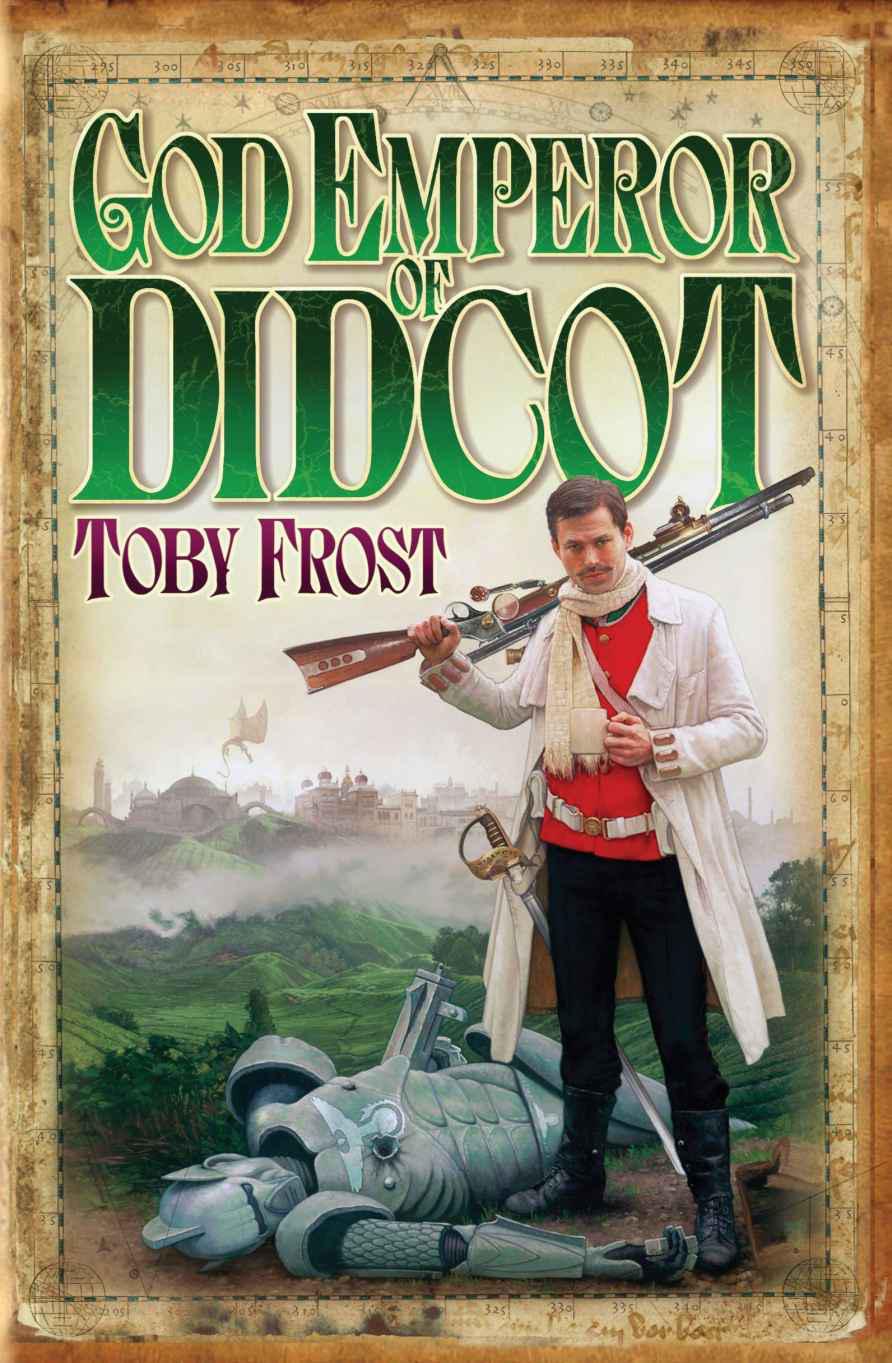 Table of Contents
Cover
Copyright
Also by Toby Frost:
Contents
PART ONE
1 A Deadly Mission!
2 Casino Imperiale
3 The Fall of Didcot 4
4 The Rebellion Begins
5 Checkpoint Gertie
6 Damned Children!
7 The Sauceress
8 The Prodigal Spawn
PART TWO
1 Return to Urn
2 Many Types of Adventure!
3 Preparations for Battle
4 Battle is joined
5 Forward
6 A Duel with the God Emperor!
Acknowledgements
About the Author
Join Captain Smith and his crew on their next adventure. . .
The Painted Messiah by Craig Smith
The Blood Lance by Craig Smith
Copyright

Toby Frost has asserted his right under the Copyright, Designs and Patents Act 1988 to be identified as the author of this work.

This novel is entirely a work of fiction. The names, characters and incidents portrayed in it are the work of the author’s imagination. Any resemblance to actual persons, living or dead, events or localities is entirely coincidental.

All rights reserved. No part of this publication may be reproduced, stored in a retrieval system, or transmitted in any form or by any means, electronic, mechanical, photocopying, recording or otherwise, without the prior written permission of the publishers.

This book is sold subject to the condition that it shall not, by way of trade or otherwise, be lent, re-sold, hired out or otherwise circulated without the publisher’s prior consent in any form of binding or cover other than that in which it is published and without a similar condition including this condition being imposed on the subsequent purchaser.

To my Friends and Family

Wrath of the Lemming Men

A Game of Battleships

Chapter 3: The Fall of Didcot 4

Chapter 2 Many Types of Adventure!

Chapter 6: A Duel with the God Emperor!

Isambard Smith ran ten yards before the jungle burst open behind him and a mass of tentacles the size of a house threw a tree-trunk at his head. The tree flew past, throwing up earth like a bomb, and he swerved and headed east towards base camp. He glanced over his shoulder and shouted, ‘You didn’t give me an answer!’ A second Thorlian broke out of the greenery to his right, honking and bellowing, and Smith ran headlong for the bridge.

His boot caught on a protruding vine and he stumbled and lurched upright to hear the forest erupt in roars and the flapping of frightened birds as he raced on down the path.

His earpiece crackled. ‘Smith! What the devil is going on down there?’

‘Minor problem,’ he panted. ‘They seem to want to murder me.’

‘Hmm, that’s not good.’ A tentacle swept into view, glistening like an anaconda. Smith ducked as it whipped overhead, and he plunged off the path and weaved between the trees.

On the other end of the line, Hereward Khan struck a match and lit his pipe.

‘So I suppose they don’t want to join the Empire,’ Khan said.

‘Well, they didn’t actually say no,’ Smith replied. Fronds snagged his coat; branches and trunks splintered and fell behind him. ‘But to be honest, they don’t seem very keen.’

The ravine was in view. Smith broke from cover and sprinted to the rope bridge. The Thorlians howled. He bounded across, wood and hemp swaying under him, reached the other side and drew his sword. Smith cut once, twice, and the rope-bridge fell across the gorge to slap against the rock beneath the aliens.

As Smith dusted himself down Khan emerged from the undergrowth with a mug in either hand. ‘Hello, Smith.
Tea?’

‘It’s as though they think space belongs to them by rights,’ said Smith. ‘Shame, really. They’d have made useful allies against the Ghast Empire. I suppose someone will have to civilise them now.’

‘I doubt the Navy can spare a destroyer. Besides,’ Khan added, and he smiled, ‘a message has come through from my contact in the Service. You’re to fly to the Proxima Orbiter at once. Top Secret stuff, apparently. Very dangerous.’

‘Excellent!’ Smith finished his tea and wiped his moustache. ‘My crew will be delighted, once she knows. She’s always saying how she needs to get more action.’

There was light: painful light. Dimly, voices seeped into Polly Carveth’s mind and she realised that she was still alive. Debris crackled under polished shoes. A man’s voice said, ‘My God. What a hell-hole.’

She muttered, rolled over and sat up in bed. She was still dressed, although her boots were gone. The stripes on her socks made her eyes hurt. ‘My skull,’ she moaned. ‘What did I pour into my skull?’

‘What didn’t you?’ He was young, dark haired, in a Royal Space Fleet uniform: very dapper and very handsome.

‘You look like you had a hard night,’ he said. He was holding one of the empty bottles he’d encountered beside the bed.

‘I’m sure you helped,’ she said coyly. Then she winced as she rubbed her face. ‘Oh my God, I’ve got boils!’

‘It’s all right,’ said the officer. ‘You fell asleep with your face in a box of Milk Tray.’

Puzzled, Carveth prised off one of the boils. It was a blob of chocolate, slightly melted. ‘Gross,’ she said, looking at it. ‘Well, waste not want not. Mmm, praline.’

A second young officer stepped out of the bathroom and adjusted his hair. ‘Whoa,’ Carveth said. ‘There’s two of you?’

‘You’re not seeing double, no,’ said the first man.

‘Two. Bloody hell.’ She rose uncertainly to her feet.

One started to say something, but she raised her palm like a saint and trudged into the bathroom.

Grimacing, Carveth stepped into the shower, annoyed that her memories of the night were so dim.

When she came out, the nearest of the two said, ‘Fleet Command sent us with orders to collect you, Miss Carveth. You’re needed for a mission: Base wants the
John Pym
to travel to the Proxima Orbiter this morning, and you’re to go as ship’s simulant.’

‘You didn’t sleep with both of us last night, if you were wondering,’ said the other officer. ‘Or either.’

Carveth felt that it was only force of will that stopped her shrivelling up like a salted slug.

‘I don’t know where you got that idea,’ she replied, rising to her full height of five feet four. ‘I am a Class Four synthetic with precision piloting capacity, not some sort of cheap harlot. Now, I have work to do. A chance has arisen to serve the Empire, and I welcome it with open arms.’

‘And legs,’ one of the men muttered. She ignored him and proceeded to the door with haughty regal dignity. It would have been a perfect exit had she not tripped over a Bacardi bottle on the way out and nearly brained herself on the doorknob.

The car’s engine echoed off the walls of the huge, vault-like hall that held Valdane Shipping’s selection of spacecraft. The great nose-cones jutted out of the dark like a row of missiles, shining and white. At the end, the
John Pym
stood, looking like a missile that had bounced off its target and come back for a second go.

Smith had flown in it several times now, but the emotion he felt on seeing it was always the same: a mixture of affection and disappointment, like someone coming home from the wars and discovering that his wife was actually quite plain. Under the left back leg (the one that sometimes only folded out halfway) two men in overalls were working beside a van. He drove closer, wondering who they were. Technicians, perhaps, fine-tuning the thrusters? No, Pest Control.

Smith got out of the car and took out his bag. He adjusted his collar and stepped over to one of the exterminators. ‘Hello. I’m Captain Smith.’

‘Alright mate.’ The older, squatter of the men pulled off a glove and shook Smith’s hand. ‘Mike Rudge, pleased to meet you. You had some vermin running around in the hold.’

‘All the ones that were unlocked. There was one we couldn’t get into.’

Smith breathed again. Suruk kept his favourite things in that room, which visitors unused to his lifestyle might have found unsettling.

‘Submachine gun. Normally we’d just put some stuff down, landmines, say, but this is a small ship, and you’ve got to remember that it’s somebody’s home.’

‘Procturan black ripper. It’s always a shame. Near-perfect organism, your Procturan ripper. Beautiful animal. A born predator, unencumbered by delusions of conscience or remorse. Its hostility is matched only by its physical perfection. . . we found him down the back of the fridge.’

‘I didn’t realise the fridge was that big,’ Smith said, looking into the back of the van. A corpse lay in there, a wiry, bulbous-headed thing slightly larger than a man.

‘Are you sure that’s not a motorcycle courier?’

‘Nope, genuine article. We’ll fax the costs over to your boss. Got to get off,’ the exterminator added. ‘Flying up to the polar regions to deal with a metamorph. Best get up there before it turns into the bloke what’s paying for our petrol.’

Smith opened his cabin and dumped his bag on the bed.

The
John Pym
hadn’t changed: the same posters were there, the same model space-fighters hanging from the ceiling. He brushed his hands together and smiled, then stepped out into the corridor.

Suruk’s room was open now, but had been padlocked shut while the ship was empty: there was always the possibility that some busybody might report Suruk to the police for collecting human skulls. Smith was not greatly troubled by this: it was a little uncivilised, true, but the ones Suruk had told him about had been generally bad people: murderers, traitors, TV chefs and the like. Besides, Rhianna would have been impressed to see him respecting indigenous cultures. If only she were here.

Joshua and the Lightning Road by Donna Galanti
Haunting Jordan by P. J. Alderman
Created (Book 1 of the Created) by Shaw, Shannon
Beating the Devil's Game: A History of Forensic Science and Criminal by Katherine Ramsland
Suspicions (The Battling McGuire Boys Book 3) by Cynthia Eden
Sword of Vengeance by Kerry Newcomb
The Truth About Celia Frost by Paula Rawsthorne
THE TAINTED TRUST: A DOUGLASS CRIME AND ROMANCE THRILLER SERIES (THE KING TRILOGY Book 2) by Stephen Douglass
A House Without Mirrors by Marten Sanden
Kissing the Demons by Kate Ellis