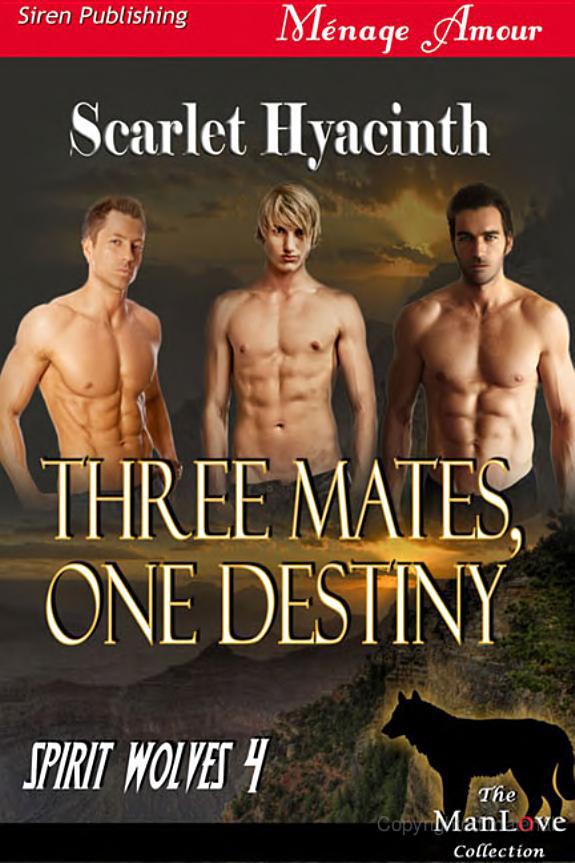 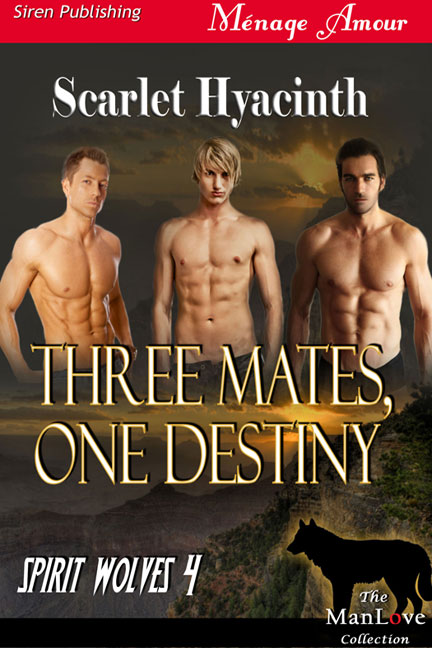 For seven years, Paulie focused only on finding a cure for the feral virus, with little time for personal relationships. All that changes when hunters Sebastian and Marcus come into his life. The attraction between them cannot be denied. They are his mates, but at the same time, they share a connection that humbles Paulie. He fears intruding in their relationship. He fears becoming the third wheel.

Sebastian and Marcus have always been together, facing everything from prejudice to feral attacks as one being. But now, they find themselves in front of the most difficult battle of their lives—the battle to win their mate's heart and trust.

As Sebastian and Marcus struggle to convince Paulie of their genuine affection, the danger of betrayal crowds around them.

Can the three find their shared destiny or will their enemies defeat them?

ABOUT THE E-BOOK YOU HAVE PURCHASED:

Your non-refundable purchase of this e-book allows you to only ONE LEGAL copy for your own personal reading on your own personal computer or device.
You do not have
resell or distribution rights without the prior written
permission of both the publisher and the copyright
owner of this book.
This book cannot be copied in any format, sold, or otherwise transferred from your computer to another through upload to a file sharing peer to peer program, for free or for a fee, or as a prize in any contest.

Such action is illegal and in violation of the U.S. Copyright Law. Distribution of this e-book, in whole or in part, online, offline, in print or in any way or any other method currently known or yet to be invented, is forbidden. If you do not want this book anymore, you must delete it from your computer.

WARNING: The unauthorized reproduction or distribution of this copyrighted work is illegal. Criminal copyright infringement, including infringement without monetary gain, is investigated by the FBI and is punishable by up to 5

All cover art and logo copyright © 2011 by Siren Publishing, Inc.

If you have purchased this copy of
Three Mates, One Destiny
by Scarlet Hyacinth from BookStrand.com or its official distributors, thank you. Also, thank you for not sharing your copy of this book.

This is Scarlet Hyacinth’s livelihood. It’s fair and simple. Please respect Ms. Hyacinth’s right to earn a living from her work.

For my parents. You may never read this dedication, but I appreciate everything you've done for me.

Prologue
One hundred years before

The cavernous halls of the Magistrate’s Den intimidated Marcus as he walked behind his parents. They’d come here to officially introduce Marcus into the pack and into their nation. At last, he’d reached his majority and the age when he’d be taught how to master his wolf.

An odd buzzing noise filled his ears, drowning out the voices around him. His mother and father were speaking to someone, a man named Klaus, the Magistrate’s right-hand man. But Marcus couldn’t have focused on it if he wanted to. He felt too anxious, too afraid of what this day might bring.

At last, they reached their destination. Two ornate doors opened to allow them inside a huge throne room. Spirit wolves from all over the world gathered here for the introduction of this year’s youngsters.

Marcus scanned the crowd and his eyes fell on the Morrigans. Alice and Roland Morrigan were, as always, impeccably attired, their stances proud and stern. Marcus also spotted their son, Peter, standing by his mother's side and watching the ceremony with a bored
Three Mates, One Destiny

expression. But a different figure made Marcus’s heart begin to beat faster. Sebastian Morrigan, his best friend and Roland’s illegitimate son, stood next to his father, as still as a statue.

From the moment he’d first met Sebastian, Marcus had known the other wolf was his mate. They’d been inseparable as pups and shared every secret, every hurt and joy with each other. So far, however, they’d remained best friends, respecting the belief that a spirit wolf needed to reach maturity before he attempted mating. Apparently, young wolves sometimes confused feelings of lust and affection with the desire for a mate, but this phenomenon vanished once they were introduced to the pack and accepted their wolf completely.

Tonight, Marcus would find out the truth, and he both feared it and wanted it. In his heart, he knew his first instinct had been correct, but a small voice always whispered in the back of his mind, sowing doubts, keeping him from reaching out to his friend.

Marcus shook himself and focused on following his parents. The Magistrate, Wolfram Rozenstadt, sat on his throne and beckoned them forward with a wave. Other families with sons and daughters his age already stood there, waiting.

As he walked, Marcus passed the Morrigans. Sebastian’s lips twitched in a small smile, and Marcus felt encouraged. His head became clearer, and he even heard his mother say his name to the Magistrate. Taking his cue, Marcus followed tradition and said what he’d been taught. “I come before my pack today to humbly submit to their judgment.”

Marcus wouldn’t have called it a judgment, since no one had ever been refused, at least not to Marcus’s knowledge. Other families appeared and echoed the process, and then the parents retreated into the watching crowd.

The young spirit wolves were left standing alone in front of the Magistrate. Marcus didn’t feel much different than when his parents had been by his side. On autopilot, Marcus knelt, just like he’d been
10

taught. The others followed his example, and they remained like that, with their heads bowed, waiting for the Magistrate’s decision.

Marcus sensed, rather than heard, Wolfram get up. The air in the room seemed to shift with the power the Magistrate exuded. He closed his eyes and focused on Sebastian’s presence to calm down.

Still, the feel of the Magistrate’s hand in his hair startled him.

Casual touches between spirit wolves weren’t uncommon, since they were tactile creatures, but Marcus always preferred to stick with Sebastian’s touch and no other’s.

Wolfram’s voice seeped into his mind like a trickle of warm water. “It’s all right. I won’t harm you.”

Marcus forced himself to accept it, and soon reality dwindled, and he found himself in a sort of void, a realm beyond all reality. The astral plane. Wolfram popped in next to him and smiled. “Hello, Marcus.”

Wolfram tsked. “None of that here. Just relax and ask me whatever question you want.”

Marcus considered his ruler’s offer. He didn’t know what he wanted. He was too confused to even make any coherent inquiries.

“Can’t you read my thoughts?”

Wolfram chuckled. “I could, but I respect your privacy. Come, let me show you your wolf. You’ll feel better afterward.”

A beautiful light emerged from somewhere ahead of them, and from it, a gray wolf. The animal padded in their direction and stopped in front of Marcus.

Marcus had turned into his wolf before, but pups like him weren’t able to control their powers, so they mostly remained in human form until their coming of age. He knelt next to the animal and caressed the soft fur. With each passing second, he sensed a power grow inside him, until at last the wolf began to dissipate and its white cells passed into Marcus. He felt the spiritual connection with his beast click into
Three Mates, One Destiny

place, and glee filled him at the knowledge that, from now on, he’d be united with his wolf.

Marcus got up and looked at his leader, waiting to see what would happen now. Wolfram grinned at him. “Excellent job. I’ve seen few youngsters so in touch with their wolves.”

Embarrassment rushed through Marcus at the praise. “Th–thank you, My Lord.”

Wolfram just smiled again. The astral plane began to diminish around them, and Wolfram’s power propelled Marcus back into reality. When he opened his eyes, he’d been sent back to the throne room.

Excitement filled Marcus. The heat of Sebastian’s eyes on him made him fidget with impatience. Now more than ever, he understood Sebastian was not only his best friend, but also his mate. He wanted to shout it to the world, to claim Sebastian as his and have the other wolf claim him. But he couldn’t, not yet. He needed to be patient, just a while longer.

The beast inside him paced restlessly, aching to be with its mate.

Still, Marcus waited. Wolfram passed him and went on to help the other youngsters. The ceremony took forever, and when at last, it ended, Marcus sent a prayer of thanks to the Spirit Mother.

Much to his dismay, however, the second they were allowed to mingle, his family surrounded him, creating a barrier between him and Sebastian. “You did a good job, son,” his father, Ezekiel, said.

Marcus bristled. “You don’t find me a mate, Father,” he shot back. “I will. The Spirit Mother will show me the way to my other half.” He refrained from saying that She’d already done so.

His mother, Harriet, smiled tightly. “Of course, but that doesn’t mean we can’t nudge you along a bit.”